There are various ways to make a war game realistic. Battlefront do it with blue-chip ballistics and subtle spotting mechanics, Panther Games with plausible AI and plenty of command friction, Eagle Dynamics with sophisticated flight models and painstakingly reproduced avionics. We Are Muesli built Venti Mesi with the help of real Milanese memories and the free WW2 ‘narrative docu-game’ is incredibly powerful as a result. 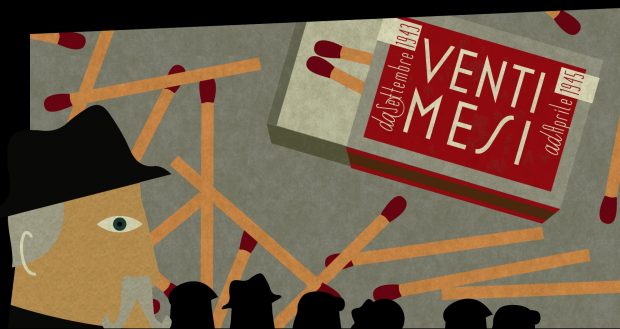 I regularly suggest, nudge, and cajole in Flare Path and but almost never urge or entreat. Today is different. Venti Mesi, a creation inspired by 20 stories from post-Cassibile, pre-Caserta Milan, is a haunting masterpiece, a game teeming with war’s dreadful dilemmas, random cruelty and unsung acts of courage. If you haven’t already played it (the English translation has been available for over a year) you really should.

Don’t expect much in the way of interactivity. Do expect to be treated as an adult.

Sometimes harrowing, occasionally amusing, always vivid, it never resorts to clichés or clumsy emotional manipulation. The game’s power stems from people and situations too human and messy to be fabrications. 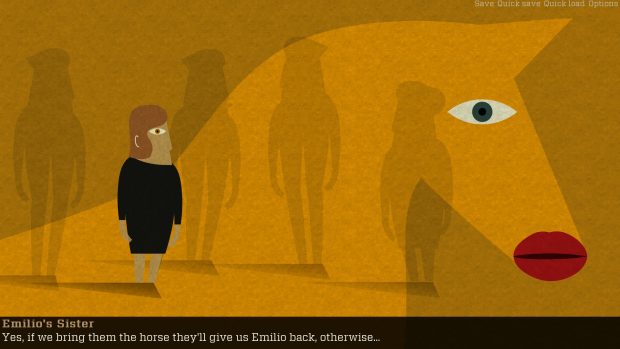 A little boy more afraid of the dark than the bombers overhead chats to his knitted guardian angel. A German sentry and an Italian factory worker connect momentarily at a checkpoint. A family discuss how to retrieve a son arrested by Fascist paramilitaries. A priest and a stranger waiting for a train in a station with twenty platforms talk about Platform 21. A man converses with his dog about a local deserter… Like a collection of great short stories, each tale stands alone but also meshes with its companions, slowly building into something bigger. If you’re anything like me you’ll emerge from the cinema that is the setting for the final story, unsettled but grateful.

Savour Venti Mesi. While our hobby is awash with games that profess to reproduce WW2, few if any reproduce it this honestly. 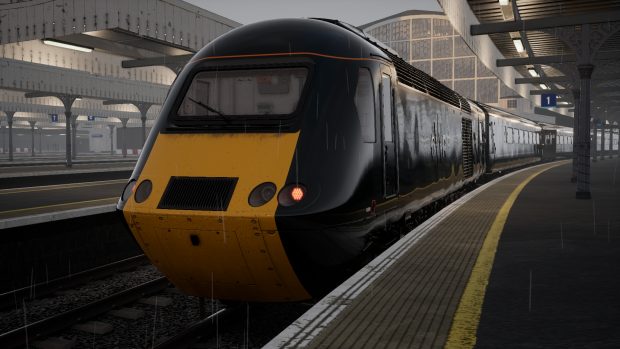 Last Friday I managed to travel from Paddington to Reading in Great Western Express without saying anything about train physics or West Ealing. Clearly a Flare Path Goes Great Western addendum is required. 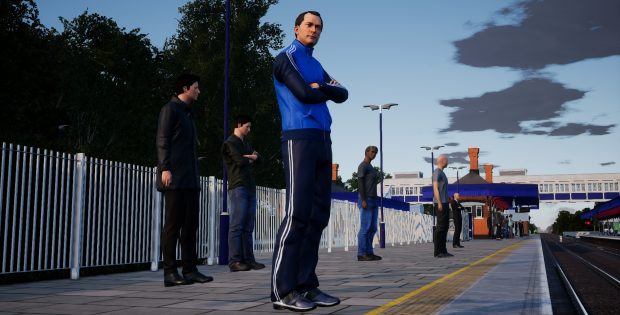 “SimuGraph provides greater flexibility to build the physics of rail vehicles in a way that makes sense to us as human beings – we’re used to the way the physical world works and we know when things don’t quite seem right. In Train Sim World, locomotives and cars will move, behave and operate just as they do in our real physical world. As a train fan myself, having trains that move in a way that is believable is incredibly important to me, as I’m sure it is to you, and when I’ve been playing some of the early builds of TSW, it always surprises me just how real the trains move and feel.” (TrainSim-Steve, October 2016)

After it they seemed strangely reluctant to talk in detail about the physics concerns speckling forums. Great Western Express offered a splendid opportunity to quietly restore confidence, so it’s sad to report TSW is still a sim that fools the eye far more adroitly than it fools the inner ear.

Cards on table. I’ve spent less than ten minutes at the controls of a real loco and that loco was a ponderous Class 08 diesel shunter. My GWE physics unease is 100% hunch-based. If someone from Dovetail wants to use the comment section below to explain why the following criticisms are grossly unfair, be my guest. 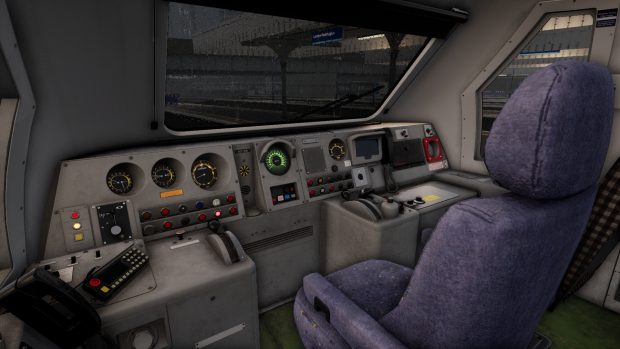 Initially, GWE does inspire more confidence than its American predecessor. The ammeter needles in the HST and the Class 66 don’t flick to zero at regular intervals. With the throttle at ‘Notch 1’ you can persuade your iron horse to travel faster than 10mph. Notch 2 isn’t interpreted by the game as “under no circumstances do I want to travel faster than 20mph.’. But there’s still something fundamentally fishy about the way the sim’s rolling stock rolls.

Example I. While reconnoitring lineside landmarks for last week’s Portillo piece, I witnessed an HST acting very suspiciously on the run to Reading. By Ealing Broadway we were doing 100mph and I set the throttle to idle and switched to the free cam to scenery inspect. Returning to the cab five miles down the line I was suprised to find the train still travelling at 85mph despite the absence of power. No throttle was used on the subsequent 25-mile stretch of line (much of which is very gently inclined) yet we still managed to trundle through Reading at a respectable 33mph.

Should an HST be able to freewheel 30+ miles along a line that spends far more time ascending than descending?  I have my doubts.

Example II. At times improbably reluctant to stop, TSW’s handsome haulers can sometimes seem strangely unwilling to accelerate too. Last night my London-bound Shed-headed container train refused to acknowledge the long slight slope east of Reading. Descending at 50mph with the throttle set at 4, I expected the speedo needle to advance fairly smartly. In fact it took six whole minutes to gain a measly 3mph. 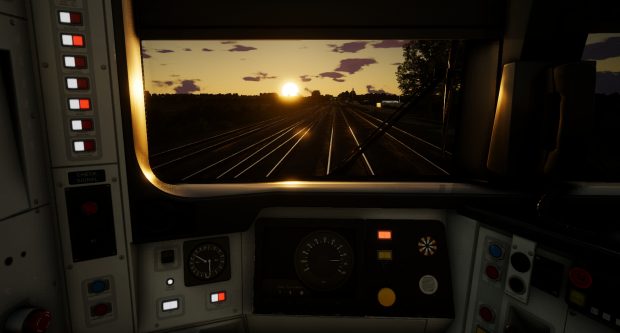 Unless my understanding of how velocity and diesel-electric locos work is seriously flawed (not impossible) Dovetail’s SimuGraph team are either a) out of their depth or b) deliberately distorting physics for accessibility or framerate reasons. While TSW is unquestionably the best looking train sim money can buy right now, until someone high up at DTG decides the sim should stop dissing Isaac Newton, it’s sure to remain a controversial title, out-realismed where it matters by numerous free and commercial alternatives. 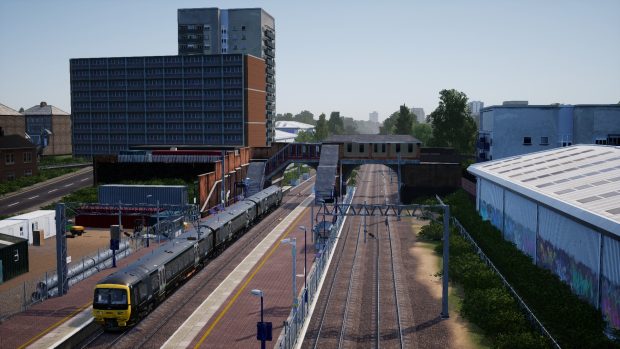 Ealing Broadway got several paragraphs in last week’s tour text, West Ealing, the next station down the line, nary a sentence.

Keen to keep things upbeat I opted not to mention the grimly fascinating 1973 Ealing Rail Crash, an incident between the two stations in which ten died and almost 100 were injured because someone at the motive power depot at Old Oak Common failed to rotate a latch 180 degrees. 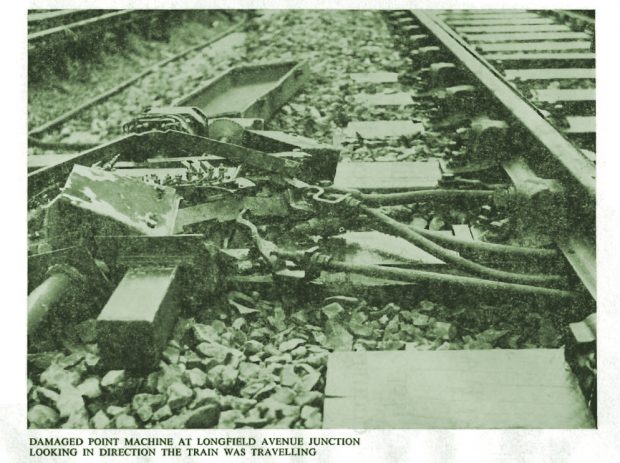 A seemingly innocuous oversight led to the battery box of diesel-hydraulic loco Western Talisman falling open the following day. After striking the platform ramp at Ealing Broadway the flapping box cover struck a point operating machine with terrible results. The rails under ‘Western’ 1007 shifted and the 17.18 express to Oxford was derailed at high speed. 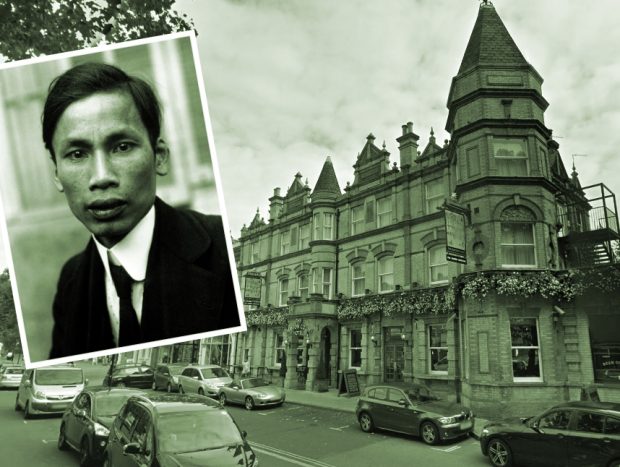 Vietnamese train simmers that get off at GWE’s scrupulously sculpted version of West Ealing station hoping to find the hotel where a youthful Ho Chi Minh learnt many valuable lessons about dishwashing are in for disappointment. The spot close to the railway where the turreted, honey-coloured Drayton Court should stand is occupied by generic Victorian housing instead. :-(

Few locations illustrate the double-edged nature of TSW’s lovely-but-labour-intensive rolling stock models better than the Plasser & Theurer workshops just west of West Ealing station. In the sim there’s nothing to tell passing train drivers that this collection of massive sheds nestling in the triangle formed by the GW main line and the Greenford branch is a second home to many of the curious yellow beasts that roam the British network nudging rails, maintaining points, and tamping and cleaning ballast. Because, no doubt, crafting an AFM 2000 RT of a similar standard to GWE’s HST, 66 and 166 would take some hard-pressed Dovetailian several weeks, we wind up with empty sidings… half the story. I still feel there’s room for a train sim equivalent to YSFlight, something that, visually at least, is content to sketch rather than slavishly replicate. 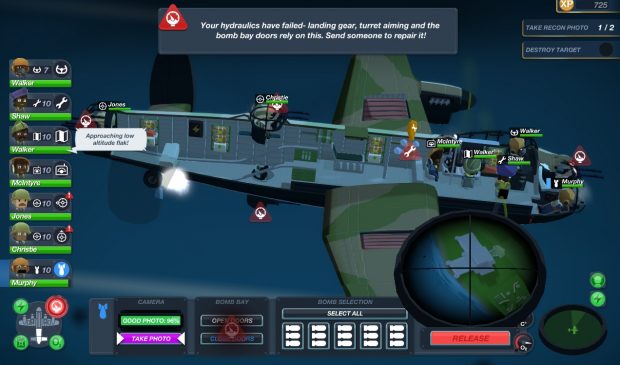 That distant desynchronised drone? Bomber Crew approaching. Runner Duck’s FTL-with-Lancasters game should be overhead by October 19. Read this mini preview and the following brief Q&A and you’ll know about as much about it as I do. 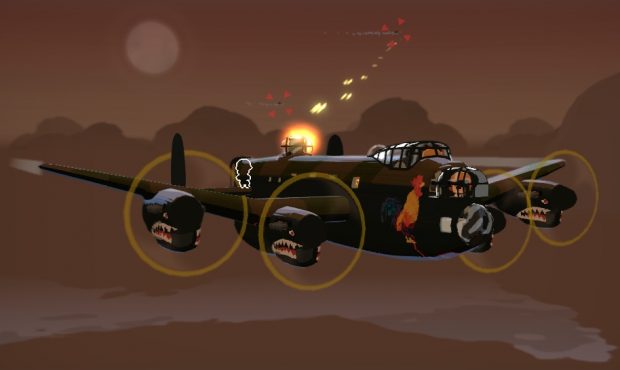 RPS: Would one of you gentlemen shuffle the RPS Question Deck, then take the top card, read it and supply an answer?

RPS: And another card.

RPS: Hmm. I’m not sure this is working. Forget the cards. Would you introduce yourselves and explain what you did before forming Runner Duck? 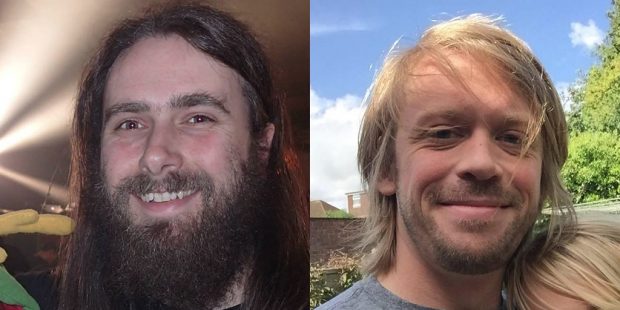 Jon: We’re Jon Wingrove (Programming/Design) and Dave Miller (Art/Design). We met while working at Relentless Software back in 2011 and have worked together as a team ever since. Early in our careers we enjoyed working on projects such as DiRT 2 and Buzz!, but later found ourselves stuck on uninspiring F2P mobile games, so took the leap to go indie and set up Runner Duck at the beginning of this year. We’ve almost completed our first title, Bomber Crew, a WW2 survival strategy game for PC and consoles. 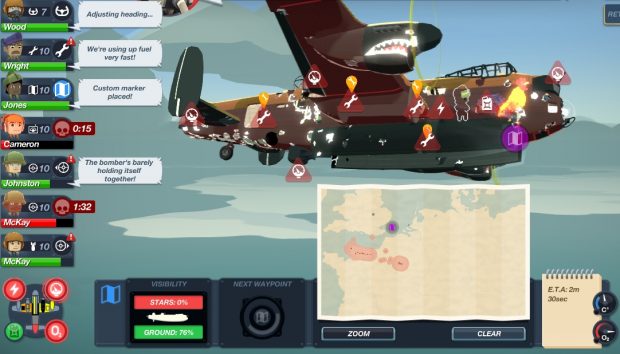 RPS: There looks to be a fair bit of FTL in Bomber Crew. Are there traces of any other games?

Jon: FTL certainly did a fantastic job of defining the ‘crew management’ sim, so that’s a favourable comparison. XCOM is also great reference for the way it encourages you to care about your squad and their survival. The first time I felt that way in a game was playing Cannon Fodder on the Amiga. I’m sure everyone who played it can remember the anguish of losing Jools, Jops or Stoo!

Dave: I was a huge fan of B-17 Flying Fortress and its sequel The Mighty 8th. The movie Memphis Belle also made a huge impression on me when watching it as a kid. I played The Mighty 8th again recently and longed for more of a connection with the crew members. Jon and I agreed that may be a good concept for our first game. 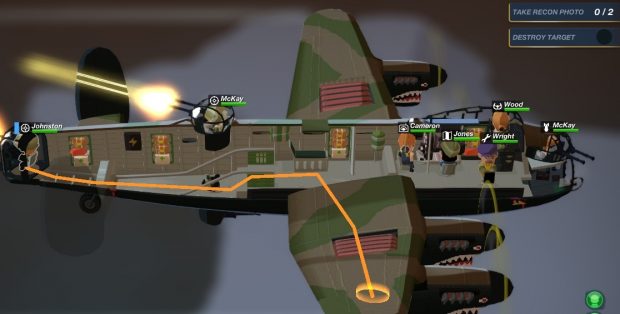 RPS: Some Flare Path readers (and one Flare Path writer) are uncomfortable with BC’s frothy tone. Can you explain the thinking behind the cartoon ‘don’t-mention-the-war’ approach?

Jon: The visual design is intended to be accessible and also remain legible in a game where the action on screen can get fairly hectic. Underlying its appearance, you’ll find a faithful recreation of the situations the real crews found themselves in, with just a few concessions to ensure it still works as a game.

The impact of the bombing campaign during WW2 is historically important. When making Bomber Crew, however, we wanted to focus on the frankly incredible personal experiences of the individuals that formed the crews. We’d love to think that after playing Bomber Crew, people may be encouraged to read further about the subject, especially if they wouldn’t have done so otherwise.

RPS: You’re clearly interested in WW2 aviation. Is there any chance you’ll revisit the subject in future projects?

Dave: I’m fascinated by it! My great uncle was a Navigator on a Whitley medium bomber, I’m in awe of what he went through night after night. I also have a soft spot for the technology of the period; I was taken to and from school in my Dad’s 1941 Packard – a car made by the company that manufactured Merlin engines for Spitfires and the mighty Lancaster bomber (along with Rolls Royce). I have boundless enthusiasm for the subject!

Saying that, there are other subjects that would be great to make games about, so we’ll see!