Christian Fruchtl
Age: 17
Club: Bayern
Position: GK
Will cost: £22m
A lot of money for a kid, but remember a good keeper can serve you into their late 30s and beyond. At least if they’re of Neville Southall’s standard. Whether Fruchtl wants to leave Bayern or not is a whole other matter.

Lazar Carevic
Age: 18
Club: Barcelona B
Position: GK
Will cost: £600k
You won’t be bagging him for lower league sides at this price, but Carevic is affordable excellence for a lot of managers. Barcelona can be hard to pry players away from, but offering him at least a rotation slot if you’re a lower reputation club might tempt him.

DC
Dayot Upamecano
Age: 18
Club: RBL
Position: DC
Will cost: £34m
If you’ve a bit more cash burning a hole somewhere, you might want to splurge on a kid who’s already got some first team football at a top flight club. Upamecano isn’t cheap, but an 18-year-old with experience is a rarity.

Kiki
Age: 20
Club: Sporting B
Position: DC
Will cost: £4.9m
Sporting continues its tradition of being a gestation pod for future greats with Malian defender Kiki. With the right clauses attached you can bring this price down to about £3m – whatever you pay though, he’s a solid bet for the future.

Marco Varnier
Age: 19
Club: Cittadella
Position: DC
Will cost: £3m
Cittadella are happy to sell Varnier, but you may have to get stuck into some hearty negotiations to pry him loose. He’s worth the price though – strong and quick, like I remember David Unsworth being. Except he wasn’t quick. Hmm.

Pepe Castaño
Age: 18
Club: Villarreal C
Position: DC
Will cost: £1.9m
Sometimes you just have to rejoice at the contractual requirement for a minimum fee release clause in Spanish football. Just under two million for a kid who can turn into a great first-team player and form the rock at your centre for years to come. 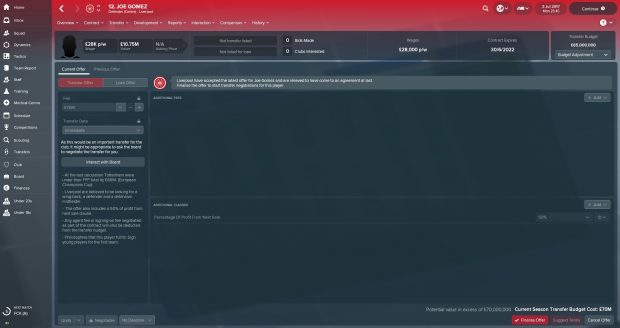 DL/DR
Theo Hernández
Age: 19
Club: Real Madrid
Position: D/WBL
Will cost: £80m
A teenager, currently playing at Premier League standard for one of the world’s biggest clubs and with huge potential to improve? Sorry, I’m just pre-emptively answering the ‘why is he eighty million quid’ question. That’s why. Obviously not one for everyone, but if you have the money he’s worth it.

Joe Gomez
Age: 20
Club: Liverpool
Position: DRLC
Will cost: £70m
Nobody wants to give Liverpool this kind of money, and if you’ve only just got this much in the bank I’d recommend… wait, I’ve already done that one. Gomez is a luxury youth player, no doubt, but his usefulness and skill at just 20 years of age makes him one to keep an eye on.

Timothy Fosu-Mensah
Age: 19
Club: Manchester United
Position: DRC/DM/MC
Will cost: £68m
Nobody wants to give Man Utd this kind of money, and if you’ve only just got this much in the bank I’d recommend picking up a few, cheaper kids. But you do get a future superstar for the outlay, and he’s adaptable to a number of different positions.

Panagiotis Retsos
Age: 18
Club: Leverkusen
Position: DRLC
Will cost: £40m
Retsos is a great option for those with a chunk of cash and a need to cover a few positions. He’s at home in the middle, but is perfectly adept at right or left back. As he’s a recent signing to Leverkusen, his value is inflated somewhat at the game’s opening – wait a season or so and you might be able to grab him cheaper.

Diogo Dalot
Age: 18
Club: FCP B
Position: D/WBR
Will cost: £16m
I always find world-beating right backs are some of the hardest players in Football Manager to source, so Dalot certainly made my eyebrows dance on seeing him. He isn’t available for chump change, but if you’ve got the cash to invest he is absolutely worth every penny. Superb player.

Luca Pellegrini
Age: 18
Club: Roma
Position: DL
Will cost: £7.5m
Pellegrini starts the game recovering from a cruciate ligament injury, so isn’t even available to play until November of 2017. As such you’ll want to look at having the signing take place in January or at the end of the season, otherwise there may be some issues.

Vitinho
Age: 17
Club: CEC
Position: D/WBR/MR
Will cost: £4m
You will have to jump through a million hoops to get this young Brazilian a work permit, or even over to your country in the first place. Unless you’re playing in Brazil, obviously. Still, Vitinho has the potential to be a 4.5-star right back, and that shouldn’t be ignored.

Axel Campeol
Age: 17
Club: AC Milan Under 20s
Position: DL
Will cost: £400k
Football Manager has a tendency to randomise young talent, as I mentioned in the intro, but when a player’s available for this price and has the potential to either be a good squad player or a world-beating full back, depending on how your game spawns him, it’s a no-brainer.