With apologies about continued teasing you with something you can’t have quite yet, I wanted to follow-up our recent chat about the stressful wonders of FTL follow-up Into The Breach with an after-action report. This takes you through how the game actually works, and demonstrates the kinds of decisions, sacrifices and face-palming involved in every moment of it.

Though I’ve unlocked a couple more variants – akin to how you gain new ship types in FTL – I’m going with the default triptych of mechs for this diary. Partly because they’re easier to explain from a cold start, and partly because I really like ’em – they’re not made obsolete by later unlocks.

COMBAT MECH, aka ‘the punchy one.’ This has more hitpoints than the others, and is the most damaging – its punch both deals a 2HP wound to an enemy and knocks it a space backwards. This one’s the tank, even though a different mech is named the tank.

TANK MECH, aka ‘the lasery one.’ Fragile and only deals one damage, but has range to reckon with. Its shot also knocks whatever it hits one backwards, and key to its use is stacking enemies like dominos before you fire.

ARTILLERY MECH, aka ‘the explodey one.’ Can’t attack anything directly next to it, but anything adjacent to the square its bomb lands on will be pushed one square backwards. When you’ve got too many enemies targeting too many buildings and not enough Mechs to fight them all, this board-rearranging shot might be your saving grace. 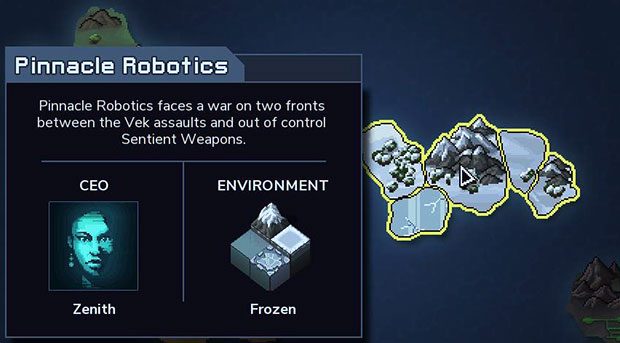 I have chosen to begin humanity’s last stand in the home of Pinnacle Robotics, an ice-locked island which is immune to the tidal waves that sporadically drown tiles in others, but equally is not surrounded by patches of water in which I can usefully drown my insectoid foes. Additionally, battlefields on this island sometimes have rogue warbots as well as the bugs. This is my first time in this frozen place, which is almost certainly a mistake right out of the gates. 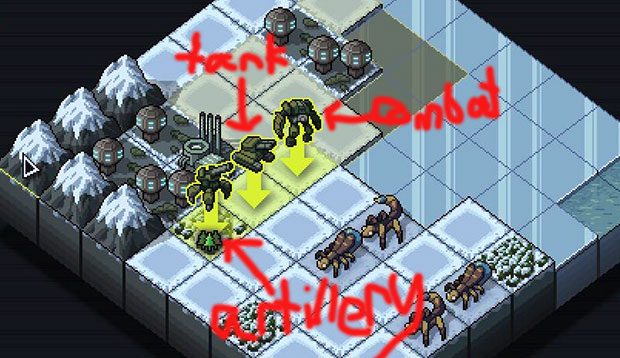 Before the first turn of any battle, I get to choose where my mechs will spawn. To some extent this is deeply strategic, but on the other hand it can also wind up totally academic, because the enemy bugs always get to move before I do, and only so much second-guessing about where they’ll actually end up is possible. Map layout can complicate things, too. In this case, I decide against placing my fragile but long-range artillery on the back row as usual, because various buildings and blockages have filled half of that row up, and I wouldn’t have much room for movement. Instead, I end up placing all three Mechs in a neat row together.

Fortune smiles on me, because a drop-pod immediately arrives. Usually it’s in a spot on the battleground I can’t reach in the first turn, or at least not if I also want to hit or zap something, but I benefit from my shoulder-to-shoulder starting positions, and it’s an easy first-turn grab. I send the artillery to get it, then have my mech lob a bomb which damages one bug and pushes an adjacent one over a spawn point. That means that no new bug can spawn from that tile next turn, plus whatever’s on top of it takes a spot of damage.

Next, I forget myself immediately and move my own Tank Mech over a spawn tile, feeling very pleased with myself that I’ve blocked two out of three turn-2 bugs. I also forget that the water here is frozen, and grunt in annoyance when a bug punched onto a river tile by my Combat Mech doesn’t drown. Sloppy. 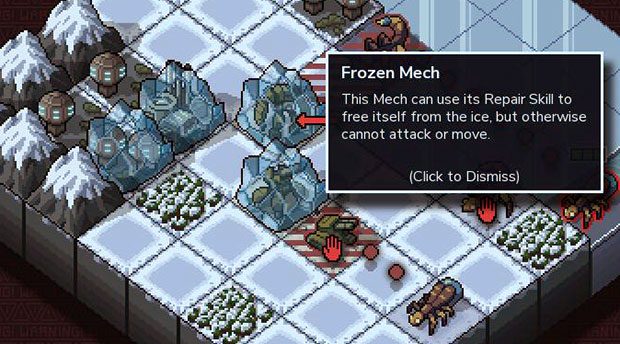 I made a third mistake, and an even more serious one – I somehow didn’t notice that this battleground was afflicted by Ice Storms, which freeze a few clearly-marked tiles each turn. Two of those tiles are currently occupied by my Artillery and Combat Mechs. In other words, 2/3 Mechs are out of action this turn. My finger hovers over the Quit button. But no, I made this bed, and should lie in it, no matter how bad it smells now.

I’m so irritated by my poor observational skills that I make the same idiot error again – forgetting that I’d left my Tank on top of spawn tile. Which means it takes another point of damage next turn. 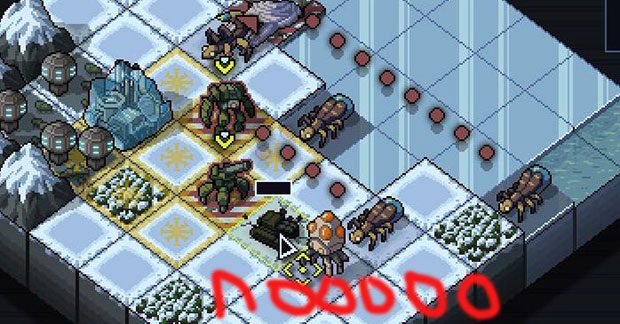 My error in the previous turn – the one with the Tank – means that the Tank is now dead. I have lost a pilot in the first battle – this is humiliatingly poor form. The Mech will return, controlled by an AI but far less effective, next match, presuming that being a man down so soon doesn’t mean doom.

A minor miracle – both of the civilian buildings that bugs were set to attack were caught in the ice storm, which blessed them with a frozen shield of sorts. That means I get away with the fact that my two remaining Mechs hadn’t been able to move last turn. This turn, they’re able to knock the bugs away from the now unprotected buildings, at least. 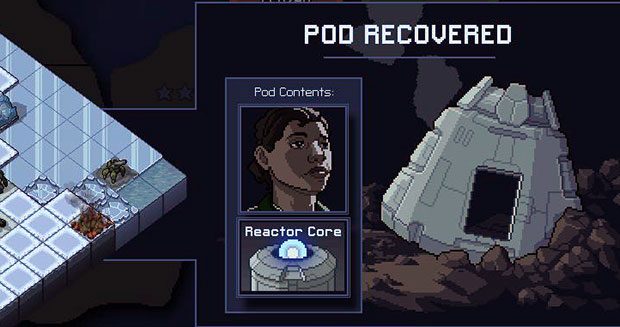 The winds are blowing in my favour now – only one building targeted, and the ice storm has granted it a shield anyway. This is the last turn, so there’ll be no more bugs than this – leaving me free to clean up however I see fit. I squish two bugs, belated vengeance for our lost comrade, and then it’s all over. No buildings lost, which means none of humanity’s defence grid power has been lost, which means the only back foot I’m on is having one slightly less mobile Mech.

But I forgot about the Pod we found. Inside which is… a replacement pilot. Hooray! The new pilot has a bonus skill – she’s immune to both the movement-restricting enemy webs and attack-restricting smoke. I will almost certainly forget about this. The pod also contains a Reactor Core with which I can upgrade one Mech. I use it to add one movement point to my punchy mech, in order that it can go punch more things more often.

At this point, I also drink a glass of beer. The effects of which soon make themselves known. 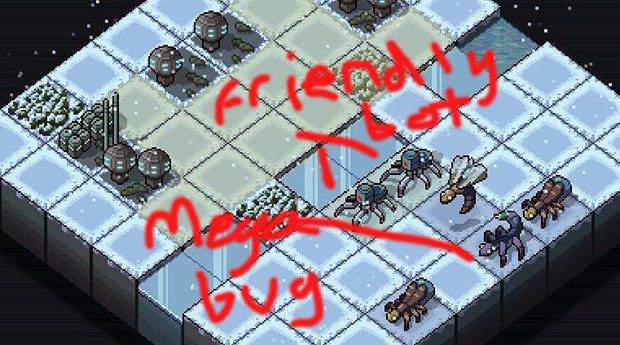 Seeing as I’ve miraculously wound up in a good position after all those rookie mistakes, I decide to go big or go home. I choose a mission which offers a reward of two Reputation and one Power, and is clearly marked ‘High Threat.’ It’s going to be tricky, but if I pull it off without losing any buildings, I’ll max out power – which means both breathing space and the potential to significantly increase the chance of an enemy attack failing to damage a building.

Initiall the first turn goes well – two bugs line up in a neat column in from of Tank, then Combat punches two more into each other, which additionally blocks a spawn tile. Artillery’s turn – splat one of the damaged bugs, shift two more out of the way…

Only, those two end up targeting something different – two human-owned Bots I’d been specifically asked to keep alive but had somehow (beer) failed to notice. And they only have one hit point each. So they are both now dead. Which means I will earn no Reputation from this match – reputation being what you can spend on upgrades if you complete an island. Bah! At least the power station I have to defend is still safe, and it’s that which will grant me that extra blip of Power. All hands on deck.

Tricky, tricky, lemon tricky. Both Artillery and are bruiser are tied up by adjacent bugs’ webs; Punchy can free itself by thumping the bug out the way, but Artillery can’t as it’s right next to it. Tank cheerfully kills another bug by slamming it into another, but Artillery just has to take a hit point’s worth of damage on the chin. 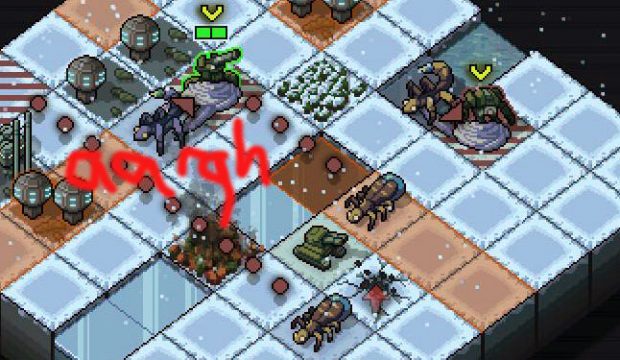 Er. Artillery is dead – the deadly, deadly beer blinded me to the realisation that the enemy pinning it was an Alpha Scorpion, which does double damage. Christ, down one Mech again, already, again. To make matters worse, the loss of Artillery opens a line of sight between another bug and a building.

The combat Mech grimly kills two bugs in one go by punching one into the other, and mercifully that clears a couple of movement tiles, enabling the Tank Mech’s shot to push the building-targeting xeno out of the way. Even better, it winds up in front of another bug, which will now attack – and kill – it next turn. It’s all coming up Mech again. 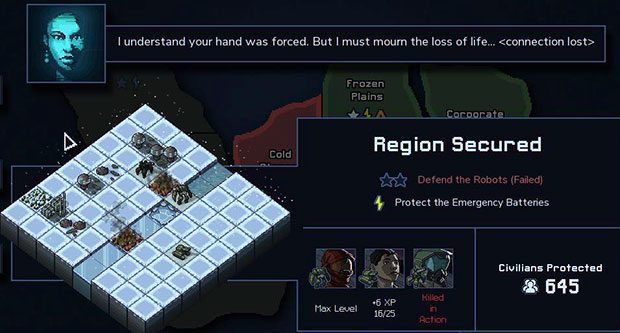 Ignominious. I can’t find a away to stop that bloody Alpha scorpion from damaging a building – all I could do is knock it into targeting a different building. We kill one more bug and that’s it for the turn. Oh well, we’ll lose one power but gain one due to protecting the power plant, so at least we’re not down.

We’re down. The building I knocked the Alpha into targeting is a two-power building. If I hadn’t touched the creature, it would have smashed a one-power building instead. So instead of maxing out power, I’ve wound up two power down. Damn you, beer!

On page two, brave future warriors are felled by giant insects. And beer.