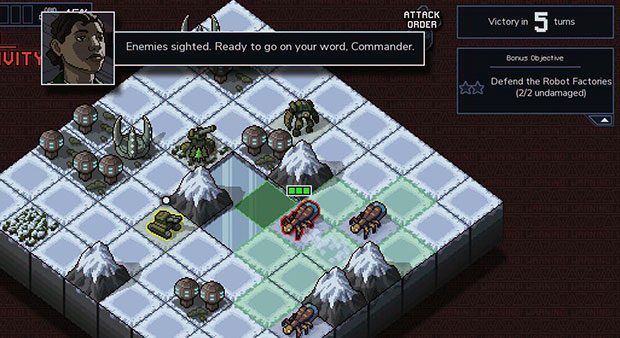 I chose a fight with a reward of two Power, but a combination of bad luck with enemy spawn locations and bungling gets us off to a terrible start. The most I can do is shift a couple of bugs away from vulnerable buildings, but that winds me up in a situation where the Tank will take one damage come the enemy’s turn. To make matters worse, I cleverly parked it over a spawn tile, which means it’s going to take two damage in total – leaving just one hit point. Danger, Will Mechinson. 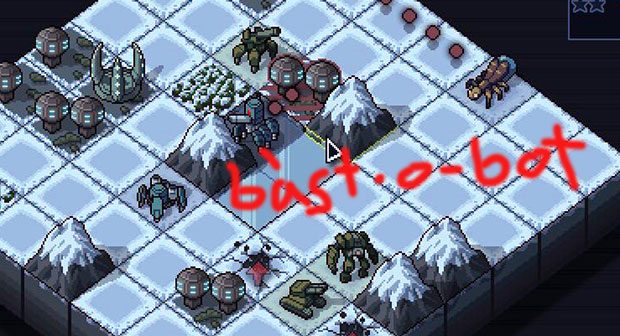 Aaaaand – enter the rogue ‘bots. Two teeny-tiny little bastards who’ll target anything they wind up next to. Which turns out to be buildings. My three Mechs are able to splat two bugs and one bot, but it’s not enough – bye-bye one Power. 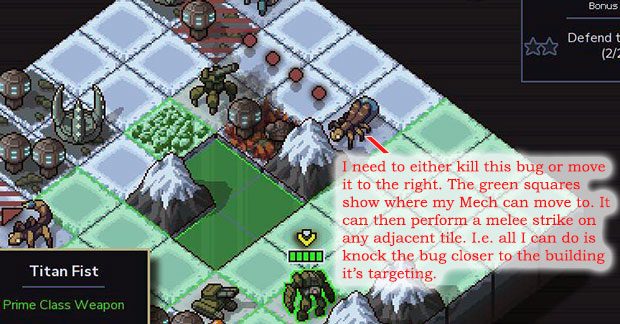 Only three targeted buildings this time, but my Tank is too far away to deal with the third bug. Which means my total Power is down to just two. Come zero, it’s game over. Oh, balls. 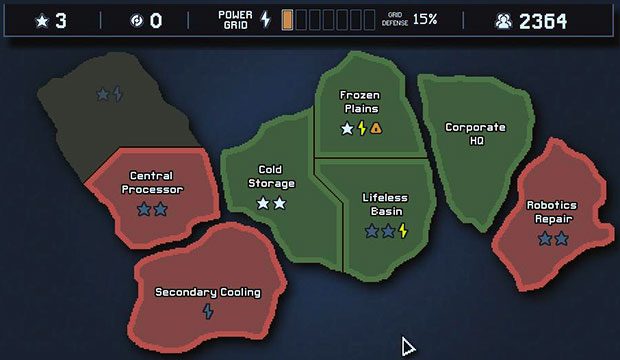 Once again, too many targeted buildings for my Mechs to be able to cope with. We lose another one, putting us down to one power for the campaign. We’ve won this fight, but at heavy cost.

This one didn’t feel fair, to be honest – those rogue ‘bots seemed like too much to handle on top of everything else. But c’est la Into The Breach vie. 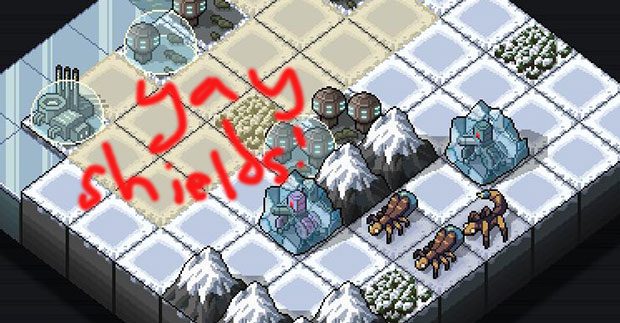 I have to go for the mission that has just 1 power reward, as the others only offered Reputation. Even if I pull it off, it’s a meagre reward and I’ll still be a in a tight spot. More pressingly, if I lose here it’s the end of everything – Earth’s last defences will be stripped away, the bugs will invade en masse, and that’ll be that. Until the next time.

More of those rogue auto-bots, so this’ll be tricky. All told, there are too many bugs, with two buildings targeted, and my Mech placement is such that I can only rescue one. Fortunately, both are trapped in a shield which will absorb one strike. Breathing space, in other words. 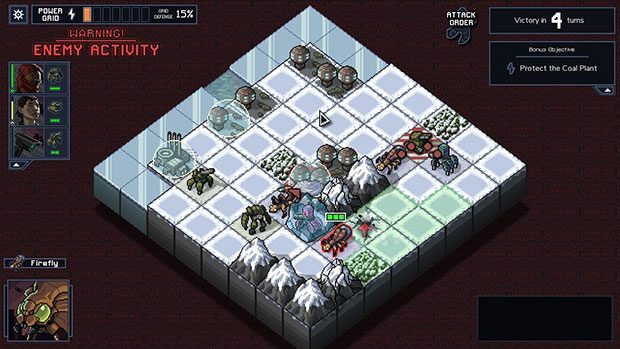 The same situation, basically – there but for the grace of a magical energy barrier around a building.

Reasonably successful now – couple of bugs killed, couple of spawn points blocked, but in order to save a building I have to knock a bug into a position that has it targeting a frozen rogue bot, thus waking it up and adding more threats to the board. Erk. 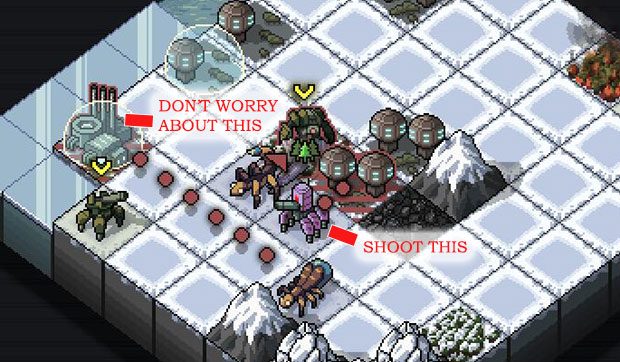 There are now five enemies to reckon with in total, with three buildings targeted. Every single shot matters now – if even one of those buildings fall, it’s all over.

Big problem: my Punchy mech is locked down by enemy webbing. Which means the best I can do is use the Artillery mech to shuffle bugs around the battlefield, and hope there’s a combination that leaves all the buildings safe.

There isn’t. But, mercy of mercies, one building does have a shield. By deliberately pushing a bug a bit left to target that, we should pull this off.

This was the do or die match, and we did it. Two power in the bank, two Mech pilots still alive – but now it’s time for this island’s climactic boss fight. 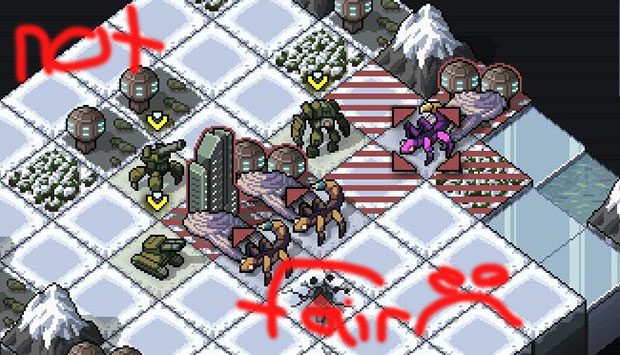 Bosses are, simply, bugs with far too many hitpoints and far more damaging attacks. They never go down in the first turn, but my problem is I can’t leave it roaming while I pick off the standard bugs, because I’m still in a situation where losing two buildings means game over.

Three buildings are instantly targeted, as soon as the bugs spawn. Is this even possible?

It is, but it’s hideously complex, with only one solution. I have to use my precious once-per-match Reset Turn option on the first turn to achieve it, which is poor form indeed. But we do wind up with one enemy dead and the other two moved. 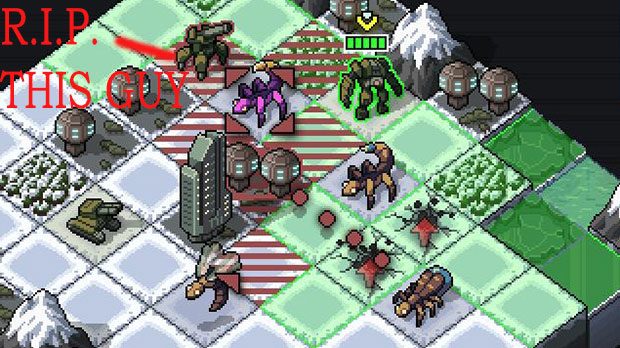 To save a building, I have to sacrifice my Artillery Mech to the boss-bug. Which has yet to take any damage itself, so I’ve now got to take it down with just two Mechs. As well as protecting all these bloody buildings. 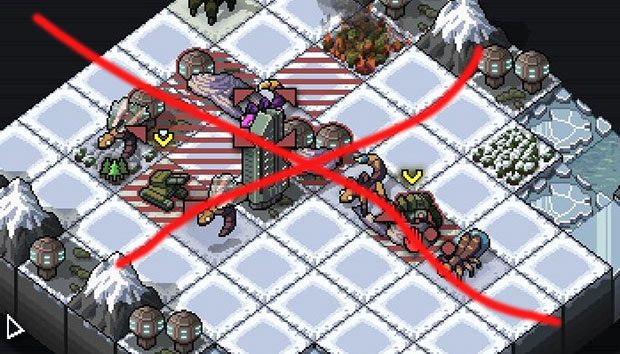 And here comes the inevitable doom – we held it off a little longer than I’d expected, but the reaper always collects eventually. One of the two targeted buildings can’t be saved, which means we’re back in that familiar dilemma – the next building to fall means game over. 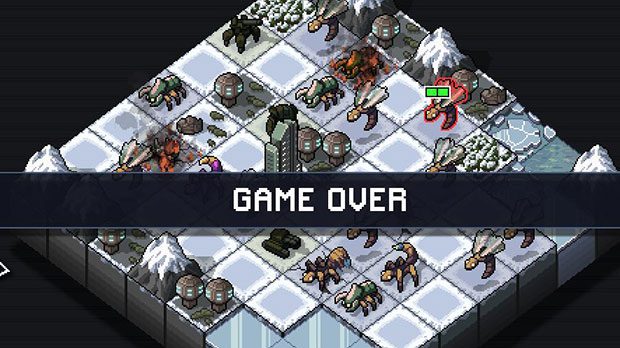 Three buildings targeted, only two Mechs. If one of those Mechs was Artillery I’d have a shot at this, as its bomb can shuffle multiple bugs around. As it is, no dice. I give the boss a good thump with the Combat Mech by way of pre-emptive vegeance, and then I sit back to watch Earth fall to the invaders.

To quote the bug-squishing bard, game over, man.