For a wireless gaming headset, the Steelseries Siberia 800 sure does come with a lot of cables. Open up the box and you’d be forgiven for thinking you’ve bought the wrong headphones, as there’s a whole other mini box crammed inside it with more cables than you know what to do with. This is mostly because, unlike a lot of wireless headsets, the Siberia 800 uses a dedicated transmitter box that can be connected to a variety of different devices instead of a traditional USB dongle. Don’t get me wrong, it still feels like a slap in the face when the whole point of wireless headphones is to get rid of said wires, but there is method to this cable-hogging madness.

You see, the Siberia 800 (and its nigh-on identical, Bluetooth-enabled sibling, the Siberia 840) has been designed for use across as many platforms as possible, including consoles, PC and mobile, with the transmitter acting as a sort of AV receiver for all your different audio sources. To be fair, it’s nice that Steelseries has been so accommodating here, as there are plenty of other headsets out there that make you pay extra for additional cables.

Its bundled ‘chat’ cables for Xbox 360 and Xbox One may date it somewhat, but there’s plenty of more modern bits and bobs in here, too, including an optical S/PDIF cable for your TV and PC, a regular 3.5mm analogue cable for wired use, another 3.5mm analogue cable with a flat, right angle jack that’s supposedly for mobile devices but is actually no different to any other 3.5mm cable, and a mini-USB to regular USB for PC and consoles.

You’ll also see Steelseries raving about how it supports Dolby’s 7.1 surround sound, either in Dolby Digital or Dolby Pro Logic IIx form via its optical and USB connections. But let’s face it, when any given pair of headphones only comes with a maximum of two speakers, you’re not really getting proper 7.1 surround sound. It’s physically impossible. Instead, it’s all done at a software level, where your audio drivers do a little bit of jiggery-pokery and add extra virtual audio channels to best represent what it thinks 7.1 surround sound should, well, sound like. It doesn’t do a bad job, actually, at least over USB, but don’t be fooled into thinking it’s going to completely transform your listening experience. 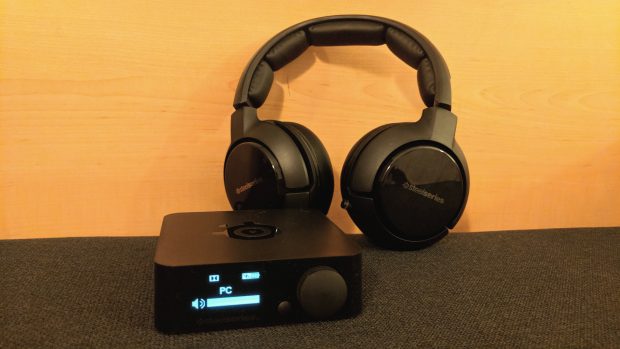 Admittedly, the flexibility provided by the transmitter box will likely be lost on most PC owners, as I’d guess a fair number of you don’t have your main gaming rigs set up politely next to your living room TV. As a result, you may want to consider a slightly less convoluted headset if you’re largely going to be using this for PC gaming and nothing else. For all the hassle involved in setting it up, however, the Siberia 800 certainly doesn’t disappoint when it comes to overall audio quality.

Regardless of whether I was using them wirelessly or tethered via its 3.5mm analogue cable sans transmitter, the resulting audio was clear, crisp and wonderfully balanced. I certainly didn’t feel like I was missing out on its virtual surround sound when using its wired connection, and the bass was kept in check at all times. Whether it was listening to the gentle guitar strumming of Final Fantasy XV’s overworld them or hearing the huff and puff of Tacoma’s ever-present sanitation drone accurately whistle and wheeze round my head as I floated through the space station, the Siberia 800 delivered on all fronts irrespective of volume level, creating an immersive soundscape I’d happily listen to for hours.

I say hours – I still had to shuffle the memory-foam padded headband around every half hour or so, but on the whole they were more comfortable than other headphones I’ve used recently. That’s largely down to the Siberia 800’s large, circular ear cups, which practically melted away against my face. These have also got memory foam padding, but it’s the faux leather finish that really makes them feel soft against your cheeks. Most of the time, I barely even registered they were there. 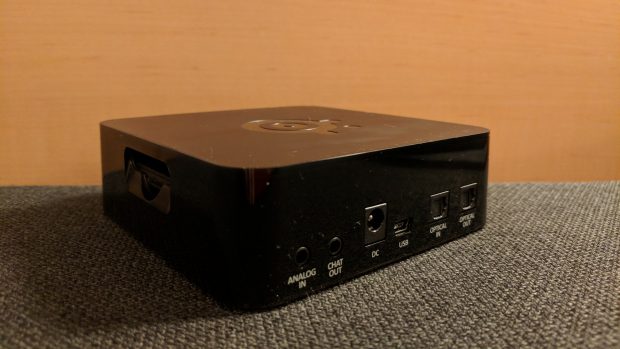 Yep, the Siberia 800 comes with every cable to go in these ports.

The Siberia 800 is attractive enough to wear on the move, too, and its closed-back design means you can happily wear them without disturbing others. That said, I was disappointed to see numerous scuff marks appear on its plastic frame after just a ten-minute journey at the very top of my backpack on the way to the station one day. The glossy ear cup covers also attracted no end of fingerprints – which is a shame considering you’ll regularly need to remove them in order to replace its rechargeable lithium battery. Thankfully, you shouldn’t have to do this too often as the battery is rated for 20 hours use, but simply putting them on will still leave the odd imprint as you adjust the fit.

Still, any extra hassle that comes with keeping the Siberia 800 clean is far outweighed by its disappointing retractable microphone. This slots into the left ear cup, and can be roughly adjusted to your liking, but the quality of any resulting chat wasn’t great, to say the least. It will just about get the job done when playing together with your mates online, but using it for calls was a bit of a muffly mess. For my money, the Sennheiser GSP 350 is still king in the headset microphone arena, but then I found those weren’t nearly as good in terms of overall audio quality.

Other little extras you get with the Siberia 800 is a microphone mute button next to the main power button, and an adjustable volume ring on the top of the right ear cup. The latter doesn’t control your PC’s master volume, but it’s still quite handy to have for making those slightly finer adjustments in-game when there are no other volume controls to hand. Annoyingly, the slider just carries on turning regardless of how much volume’s actually available, but at least it makes a small beeping sound when you’ve hit max volume. 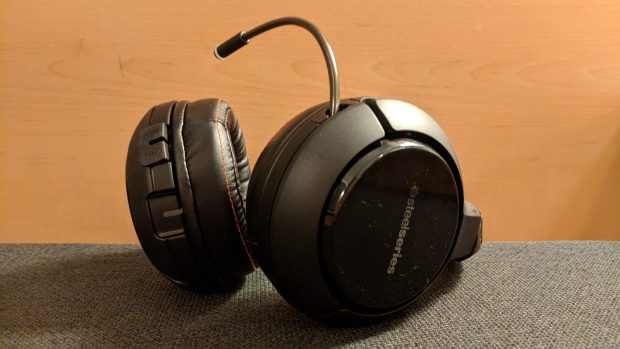 Alternatively, you can always cast your eye over to the transmitter’s smart OLED display for a real-time gauge of where your volume levels currently sit. The transmitter also shows your headphone’s current battery level, and if you pop the second bundled battery inside its little charging nook, you’ll see how much charge that one’s got, too – another generous addition that goes a long way to justify its £210/$260 price.

As much as I like the Siberia 800, though, I’d still expect a better microphone at this kind of price. Again, if you’re not the type of person who plays a lot of online games, then this won’t be much of a problem, as the quality of its overall audio is superb. As long as you’re down with the extra hassle of setting it up and adding each individual audio source one by one on the transmitter menu (yes, really), then I say go for it. For those after a great pair of headphones and a great microphone, however, the Siberia 800 probably isn’t the one for you.