When I started my first tech job, the mouse waiting for me on my desk was utterly enormous. Left there by its previous owner, it was the Steelseries World of Warcraft Cataclysm Gaming Mouse – an absolutely beastly bit of plastic that looked like it had just come out of a hot oven. It was wholly unsuited to general office work and made my hand feel absolutely tiny. As with most things, though, I eventually got used to it.

Since then, I’ve moved on to smaller mice more befitting of my spindly fingers, but when I started using Roccat’s new Kone Aimo mouse, those early work memories came flooding back. Like the Cataclysm, this is another huge wired mouse, filling the whole of my palm and extending far beyond the tips of my fingers – although at least this time the Aimo’s smooth, curved design looks and feels more reminiscent of some kind of futuristic super car than a chargrilled armour plate. Is it any better to use and can it break into our list of the best gaming mice? Let’s find out.

It’s a bit of a shock to the system, but it’s not wholly unpleasant. Designed for right-handed users, your thumb sits snugly in a small, inner groove on top of one of its twelve buttons, and unlike Alec’s experience with the Logitech G603, no sharp edges to speak of. There’s no such nook for your little finger, sadly, but resting it on the side against my mouse mat was still perfectly comfortable.

Of course, a button right by your thumb may set off alarm bells for some of you, but this is actually one of the Kone Aimo’s main features. Its name sounds like the punctuation equivalent of go-faster gaming stripes, but Roccat’s so-called ‘Easy-Shift[+]’ button (pictured below) essentially acts like the Fn key on your keyboard, giving each mouse button a second, well, function. 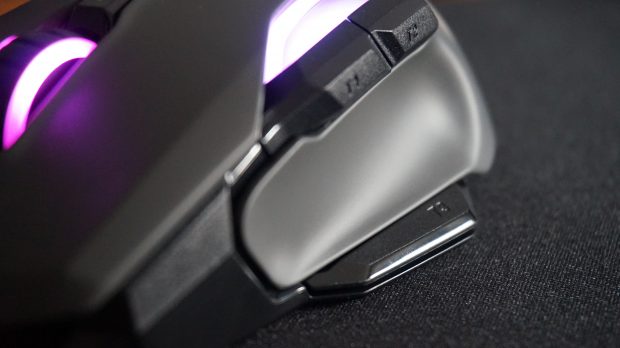 The Easy-Shift[+] button, also known simply on the actual mouse as ‘T3’

By default, the scroll wheel doubles up as multimedia controls, letting you play/pause media by pushing it in, adjust the volume by scrolling and change tracks by tilting it left and right, but you can assign all sorts of things to them using Roccat’s Swarm software. This includes web browser controls, timers, hotkeys, the ability to open certain apps, folders or documents, as well as on-the-fly DPI adjustments to change the mouse’s overall sensitivity. Or – if you’re feeling particularly daring – system functions like shutting down, restarting or putting your PC into sleep mode. Personally, I’d be too frightened of triggering an accidental shut down to even think of enabling such a feature, but hey, if you like playing fast and loose with your save files, then the Kone Aimo is very much at your service.

The Easy-Shift[+] feature also lets you assign macros for a number of games and applications, either through one of its 43 preset profiles for things like Plunkbat, Battlefield 1, Rainbow Six Siege, Overwatch, GTA V, Destiny 2, League of Legends, Team Fortress 2, CS:GO and Starcraft 2 to name just a few, or one you record yourself. Hit the small + and – buttons just below the scroll wheel with Easy-Shift[+] enabled and you can switch between five different profiles, too, giving you maximum flexibility in your various button assignments.

The problem comes in figuring out which profile you’ve actually got enabled. There are essentially three options. You either have Swarm open the whole time, customise each one with some sort of obvious RGB lighting scheme, or you enable Roccat’s faintly ridiculous audio feedback option where an over-enthusiastic man says “PROfile One” etc every time you make the switch. He’ll also read aloud any DPI changes you might make or tell you that the “volume[mah]’s UP” etc (yes, really) – regardless of whether you’re in-game or just on your desktop. But it just sounded so ridiculous I had to turn it off. 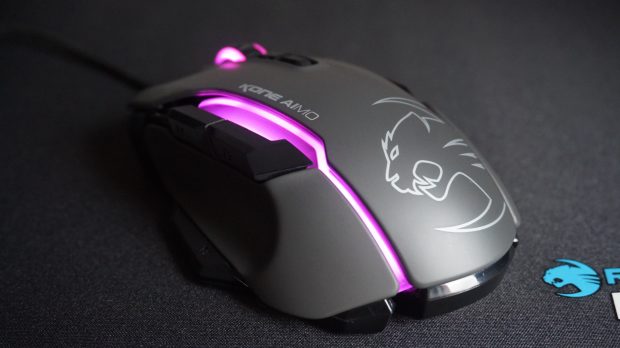 Instead, you’re probably better off going with an RGB option – provided you can also remember which one’s which. There are six lighting options available, including your usual heartbeat patterns and a gentle approximation of breathing among others, but arguably the most interesting one is Roccat’s own Aimo Intelligent Lighting system.

It’s hard to describe the exact inner workings of Roccat’s Aimo tech when this is the first peripheral to support it (more, including an Aimo-branded keyboard and headset, are on the way next year), but it’s meant to react to how you use it, subtly changing colour when you move it, click the mouse buttons, adjust the volume and type.

Roccat described it to me as the sort of peripheral equivalent of Philips’ Ambilight tech, where LEDs are installed on the back of a display to help project the dominant colours onscreen beyond the frame of your TV or monitor onto the wall behind it. The marketing line says it’s meant to make things more immersive, but I’ve always found it incredibly distracting. I’m hoping, though, that Aimo will prove to be easier on the eyes in the long-run, as every colour change it did make while I was using it was fairly subtle and innocuous, slowly fading from one shade to the next without drawing attention to itself. It was certainly a lot more pleasant than the other options available, such as the intermittent snake pattern or slightly garish colourwave, and I’ll be interested to see what its learnings turn into as I continue using it. 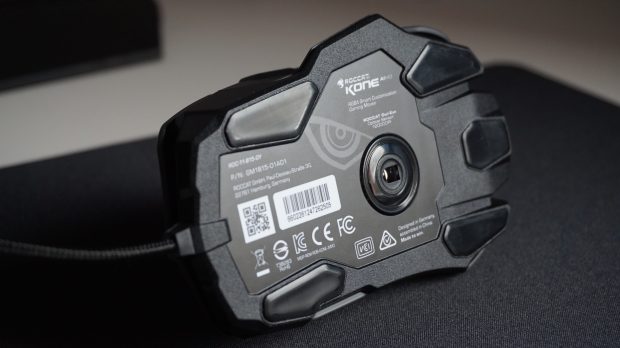 Elsewhere, you’ve got plenty of speed options and DPI adjustments, ranging from a dead-slow 100 DPI – handy for lining up sniping shots in an FPS, for example – all the way up to a frankly ridiculous 12000 DPI. Personally, my eyes don’t seem capable of keeping track of anything beyond 1200 DPI, but it is handy to have the ability to switch this on the fly using any button you please – with or without comedy audio man.

There are also settings to adjust the polling rate (how often the mouse tells the PC what it’s doing), but I couldn’t see or feel any discernible difference between the default (and highest) 1000Hz option and 500Hz (the next rung down), so I left it on the latter.

All in all, the Roccat Kone Aimo is probably a bit too big for me to carry on using long-term – we’ll see how it fares over Christmas – but there’s no denying the flexibility it offers. Its Aimo lighting tech is also pretty inoffensive as far as RGB mice go, and Roccat’s Swarm software doesn’t make me want to strangle myself with its braided cable wire. At just under £60 or a full $80 if you’re in the US, it is rather expensive as gaming mice go, but if you value this kind of adaptability and don’t have tiny hands like I do, then the Kone Aimo is well worth a punt.