Oh here we go. Now it’s Christmas. Some judge the season by when their advent calendar starts (December 1st), by when their kids wake them up screaming at stockings (5am), or by when the shops start selling chocolate coins (August or summat), and some don’t consider it Christmas until someone on the night bus belts out “FIVE! GOLD! RINGS!” (every day, if we’re lucky). Some even go by the Steam winter sale. That has just started, so jingle those bells and scoff some roasties. The sale is huge but we have picked out a few games ourselves if you want recommendations.

The sale will run until Thursday the 4th of January at 6pm GMT. A million squillion games are on sale so hit the store and get stuck in. Seeing as that’s a great many games, we’ve recommended a few (mostly) less-obvious choices for your convenience.

Brendan: THWRCK! That’s the sound of a very fast foot colliding with your temple. BWFH! The sound of two open palms slamming your abdomen. The strikes, parries and dodges of Absolver are part of a satisfying, violent dance filled with sounds like this. On one level it’s a pleasant stroll through a dilapidated and gorgeous landscape. On another, it’s a horrible place full of people who are so skinny it makes them angry. It’s also been updated a lot since release, with fewer lag problems and a better inventory system. But perhaps the best thing is the fashion-conscious citizens, who wear their masks, capes and collars with all the pride of the catwalk, to whom the game is not “Absolver” but “Fabsolver“.

Alice: Deadly Premonition is one of the best PC games of all time and I assume that list is 100% official and objective so good, buy this game. It’s a steal at the price. Become an FBI agent to investigate murders, chat to your best friend, eat grave tomatoes, steal cigarettes from a dog, and grow awfully fond of a little Pacific-Northwestern town in this open-world survival horror RPG… thing. Despite aspects being well rubbo (the PC port included), and perhaps even partially because of that tension between the bad and the good, Deadly Premonition is something warm and special.

John: I’ve only gotten around to playing this recently, still early on, and goodness me it’s good. Well, it’s more Dishonored, so of course it is. But it’s surprisingly different to Dishonored 2’s base game, with new powers and a different approach, alongside the usual sneaking about and making piles of unconscious bodies. And you can listen to the rats’ thoughts. Rats think about a lot.

If you need more convincing, read Alec’s Death of the Outsider review.

Adam: I only managed to make time for ECHO last week and I’m glad I did. It’s central idea – a stealth game in which you are playing against clones of yourself – led me to imagine it’d be a puzzle game of sorts, but no. It’s a high concept sci-fi narrative set inside an impossible structure, and it feels like Dead Space with a Master of Arts degree. Like me, many of you probably missed it when it came out. Snap it up now.

For more, see The Mechanic’s take on its repetition. 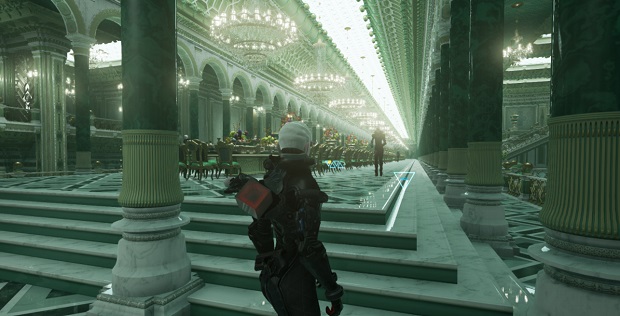 Alice: Let’s be bold: Infra is the very best first-person adventure game investigating infrastructure damage. The best of them all! It’s a setting I found wholly disarming, having no idea what to expect, and I was delighted. I walked along a river snapping pics of crumbling concrete on bridges, tutted at drips and puddles in a hydroelectric dam, stumbled across an occult murder scene, wandered around a water treatment plant investigating why their chlorination isn’t working, solved all sorts of switch puzzles all over, and puzzled over hints of conspiracy. The final of its three episodes came out a few months back so now’s a good time to get in.

Graham: In the past month you’ve heard most of RPS rave about Into The Breach, the kaiju-punching mech strategy game from the makers of FTL. You can’t play that yet, so you should play Invisible, Inc. instead. It’s a similar turn-based strategy game about trying to make smart decisions when you know what the consequence of every action is, but instead of defending cities you’re breaking into corporate headquarters, dodging guards, hacking the gibson, and rescuing characters with exciting abilities to expand your crew. It is the best strategy game in years.

Graham: I think about The Phantom Pain every week and have done since its release. It’s an open world stealth game in which you can complete missions violently or silently or by firing a single missile from a distant hill or by dressing up in a cardboard box with a poster on the front or by causing a car crash with horse poop or by riding around on a skating robot or by just asking your dog or sniper buddy to do all the work for you. Its sneaky infiltration missions are fun enough that I’d love the game even if it was as straight as Tom Clancy’s laces, but that you can also ride to those missions in a pink helicopter blasting “Maneater” makes it a strange gaming bliss unlikely to ever be repeated.

Alice: I’m revisiting this myself right now and yup, it’s still astonishing as an open-world stealth sandbox. Despite all its faults, MGS V is quite wonderful.

John: A full 2D metroidvania, somehow delivered with only two input buttons (beyond directions, obvs). It seems like it should be far too limited, but is in fact superbly complicated and well-delivered. It doesn’t live and die by its gimmick, but rather makes a solid and slick platform game around this self-imposed limitation.

Brendan: The survival platforming of the Slugcat disappointed me. But this bestial world of predator and prey is still filled with so much that fascinates that I still think it deserves an end-of-year mention. The dark, gargantuan creatures that lurk in the oceans. The otherworldly beings who offer something mystical and unspoken in the far reaches of the world. The spiders, holy god, the spiders. I don’t take back any of my criticisms about its difficulty or control scheme (although it has added an easier mode since my review) but I would regret all those criticisms if it scared away even one person who would fall in love with this massive land of fearful and beautiful wildlife.

Read Brendan’s Rain World review and do check out his GIF bestiary. Adam: Already so cheap that I’m cross that you haven’t bought it, this is a deliciously dark anthology of stories that play with the possibilities of limited movement and a first-person perspective. I want Stories Untold to run for years and to be my own interactive Twilight Zone, or Tales of the Unexpected.

Adam also gabbed about it on the RPS podcast and John reviewed it too.

Katharine: Subsurface Circular is the perfect game to play over Christmas. It’s short, wrapping up in roughly two hours, and the fact you don’t move from your seat on a subway train means you don’t have to feel quite so bad about stuffing yourself silly with turkey all holiday. In all seriousness, though, Subsurface Circular is a lovely little text adventure that sees a robot detective quiz fellow commuters about their lives as they try to unravel a series of suspicious events taking place in the world above. Its observations about the highs and lows of public transport are also absolutely spot on, and there’s even a brilliant bit of dialogue where you can recite the entire chorus of Les Miserables’ ‘One More Day’ as you try and converse with a headphone-wearing toolbag. It’s the most fun you’ll get from a stationary protagonist all year.

Alice: Christmas is all about traditions, and one RPS Christmas tradition is that Pip recommends you buy Subnautica. Acting as a proxy Pip, I propose the same. As myself, I second it. This underwater craft-o-survival game is such a pleasant place to explore and build, aside from the vast horrors and alien mysteries lurking in the depths to ruin you. But maybe you’re into that too.

I still really like Pip’s tour of her undersea volcano base.

Adam: I liked this gory sequel rather than loving it, but if you’ve already met the Bakers in Resident Evil 7, this is a fine addition to any horror gaming collection. The open world parts aren’t as distracting as I thought they might be, though they’re not quite as exciting as I hoped they might be either, but there’s a really solid, spooky, schlocky game in there. And one of my favourite subversions of a stealth takedown ever.

See Adam’s The Evil Within 2 review for more.

Katharine: Lo and behold, Virginia is reduced to a mere 69 pence once more. At this sort of price, it would be rude not to buy it in a way, as Virginia’s a lovely little gem that takes the walking sim and does something bold and a bit different with it. Its story about the rise of an FBI internal investigations officer goes a bit haywire at the end, but it’s worth experiencing all the same for the way it dramatically cuts between different scenes and uses the language of cinema to play against our game-y expectations.

So very many more games are on sale. What do you want to nudge everyone towards, gang?

Oh, and voting is open for this year’s Steam Awards.