HTC announced a new version of its Vive VR headset last night in the form of the eye-boggling, potentially soul-stealing Vive Pro. Upgrades include sharper OLED displays, all new headphones and a shiny redesigned headband. But the true star of HTC’s Consumer Electronics Show (CES) line-up is arguably the first official Vive Wireless Adaptor, allowing you to cut the cables on both the Pro and regular Vive for a completely wire-free VR experience.

The Wireless Adaptor – not to be confused with TPCast’s wireless add on that HTC helped finance last year – will likely be a separate purchase for both headsets (there might be a Pro/Wireless Adaptor bundle at launch, but don’t get your hopes up), but this tiny chunk of plastic (see below) should make VR a whole lot easier, dramatically cutting the likelihood of falling flat on your backside after tripping over a wire.

Operating in the interference-free 60GHz band, it uses Intel’s WiGig (or wireless gigabit) tech to communicate with your PC, and thus should result in low latency and high performance. There’s no word yet on how much it will cost, but it expect it to start shipping sometime between July and September this year. 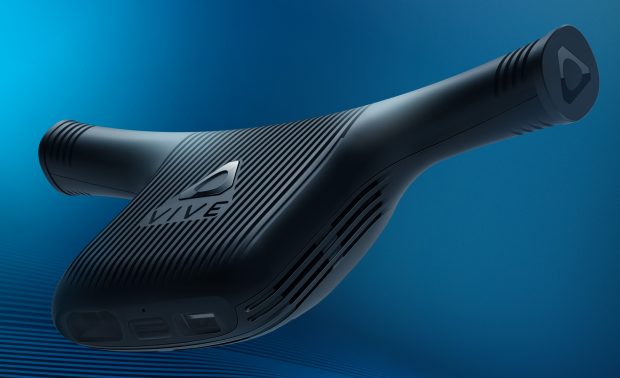 It should make a particularly good companion for the new Vive Pro, which has been completely redesigned for high-end VR fanatics. Now in a fetching shade of blue, the Vive Pro comes with dual OLED displays and a combined resolution of 2880×1600. That’s a 78% increase in the number of pixels over the regular Vive, which had a resolution of 2160 x 1200 (4480000 pixels vs 2592000, if you want to get real deep about it), so images should look a whole lot sharper and less like someone’s smeared a load of Vaseline in front of your eyeballs.

Of course, a higher resolution means your graphics card will also have to work that much harder to produce that many pixels, but HTC’s yet to say whether it will be making any changes to its recommended PC specification. The headset’s refresh rate, meanwhile, remains at 90Hz.

The Vive Pro also comes with what HTC’s calling ‘high performance headphones’. These now support 3D spatial sound for more immersive audio, and come with a built-in amplifier – a marked improvement on the decidedly headphone-less Vive of yore.

The headstrap, face cushion and nose pad block have been redesigned for added comfort as well. The former now has a sizing dial to help the headset feel more balanced on your face and decrease the amount of weight pressing down on your nose, while the cushion is meant to block out more light from your surroundings.

You’ll also find dual microphones with active noise cancellation and, of course, those soul-eating front-facing cameras that make the whole thing look a little bit too much like WALL-E’s evil cousin for me to be completely at ease with it.

“There’s a clear need in the VR market for a premium VR experience with high resolution display, integrated audio and the best components available today in a headset,” said Daniel O’Brien, general manager of Vive US. “Vive Pro offers an immediate upgrade for both VR enthusiasts and enterprises that want to utilise the best VR experience.”

Well, ‘immediate’ might not be quite the right word, as details on the Vive Pro’s availability and how much it will cost are still very much TBC at the moment. I wouldn’t be surprised if it ended being more of a commercial headset rather than one you’d set up at home, but hopefully we’ll find out soon.

VR not taking this seriously

Vive Pro tested: the visual upgrade VR desperately needed, but is it enough?

Best of CES 2018: The top PC gizmos you'll want to own this year