If you’ve ever been within spitting distance of a Plunkbat chicken dinner, you know the importance of having a light, nimble mouse under your fingers. You won’t be tucking into anything even remotely bird-shaped if you’ve only got something big and bulky like the Roccat Kone Aimo or Corsair Scimitar Pro RGB at your disposal. Instead, you need a mouse you can move with ease and minimal resistance. Something, perhaps, like the HyperX Pulsefire FPS.

You probably know HyperX more for their sticks of RAM and gaming headsets (see our lovely HyperX Cloud Flight review for more on that) than their mice, and with good reason. Indeed, the Pulsefire FPS is the only mouse HyperX currently makes, making it all the more surprising that they haven’t gone for something uber premium with all the RGB bells and DPI whistles imaginable.

Instead, the Pulsefire FPS is about as straightforward as gaming mice come, putting it in roughly the same bracket as one of my favourite gaming mice, the Steelseries Rival 110. Priced at just £40/$45 and weighing a mere 95g, it comes with two extra side buttons and another just below the scroll wheel to change its DPI sensitivity settings, and that’s kind of it. There’s no additional software to install, no nothing. You can just plug it in and get going.

Of course, no software means you also can’t customise what those aforementioned side buttons actually do – which in this case is limited to just forward and back clicks for when you’re browsing the web. That’s great if you want to surf the internet like a king; less so if you like recording your own macros. 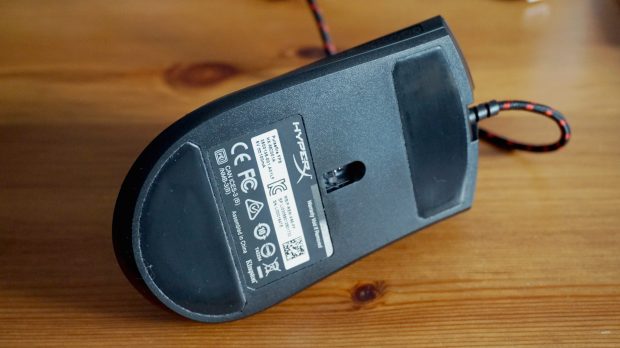 This makes the Pulsefire FPS far less flexible the Rival 110, which is kind of a problem when it actually costs a fraction more. Not much, mind – the Rival 110 is currently £35/$38 at time of writing – but as you can see in our Steelseries Rival 110 review, there are dozens more options available for those two side buttons when you download Steelseries’ Engine 3 software, letting you assign everything from keyboard buttons to OS shortcuts with ease. They’re also a heck of a lot easier to reach with my thumb, too.

While the Pulsefire FPS has a very similar shape to the Rival 110 (largely symmetrical but still very much intended for right-handed use), its buttons sit much higher off the ground, making them tricky to hit if, like me, you like resting the lower portion of your hand back on the mouse mat.

Now, I realise this might be because I also have tiny girl hands, but the farthest button was quite a stretch unless I moved my hand further up the mouse into what esporters would probably call a ‘claw grip’. This quickly became quite tiring during everyday use, though, and for the sake of a single forward click, probably not worth the pain of prolonged hand contortion. 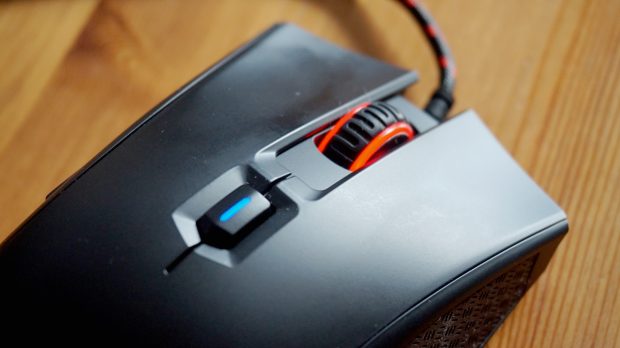 The central DPI button changes colour depending on what DPI setting you pick. Its wheel and rear HyperX logo, however, are red no matter what.

The central DPI button also limits you to just four predefined sensitivity settings, too, which again is quite restrictive compared to the Rival 110. By default, the Pulsefire FPS is set to 800 DPI, but this is really a bit sluggish for everyday computing tasks, so I bumped it up a setting to 1600 DPI. This is around what I’d normally set my mouse to given the chance, and for most people this will probably be absolutely fine for both gaming and office tasks alike. You can also go higher to a slightly-too-fast 3200 DPI or drop right down to a dead-slow 400 DPI for when you’re stalking someone down a sniper sights, but that’s your lot.

The Rival 110, on the other hand, lets you set your DPI settings to whatever increment of 100 you like between a range of 200 and 7200 DPI. Admittedly, you only get two options to hop between here on its central button, but for some this may be preferable to having four you can’t change.

Despite its shortcomings, though, I still ended up preferring the Pulsefire FPS, if only because its high, slightly lopsided arch and rubbery sides just felt nicer over the course of a day than the low-rise, altogether more uniform shape of its Steelseries rival. Going back to the Rival 110 now, for instance, didn’t feel nearly as comfy as the Pulsefire FPS, and it made me realise how knobbly and rough its textured plastic sides are compared to the smooth, soft-touch material HyperX’s gone for. 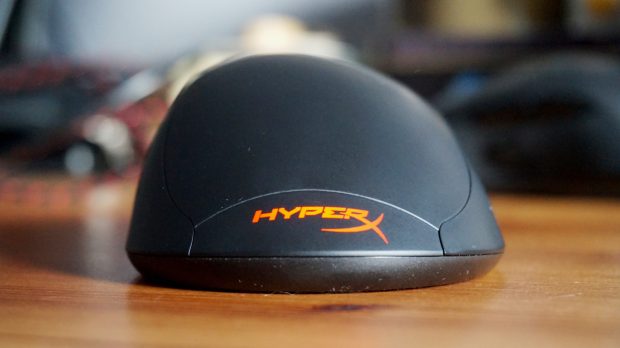 In this light, I’d happily pay a bit extra for a more comfortable mouse, even if in practice it’s not nearly as flexible as its main competitors. Personally, I can live without having its two side buttons always in reach, and its pre-set DPI options are still all quite sensible despite the fact you can’t alter them. The PixArt 3310 sensor HyperX have used here also feels more than accurate enough for playing games, and the large skates on the Pulsefire FPS’ underside made it wonderfully easy to move it across my mouse mat.

The only slightly annoying thing about the Pulsefire FPS is the fact the Omron switches underneath its right and left click buttons are somehow louder and more grating than a dripping tap. It’s rare when I feel the need to remark on the kind of noise a mouse makes, but the deep, deliberate CLICK CLICK CLICK of the Pulsefire FPS really is something else. It’s almost as if HyperX has set out to make the mouse equivalent of a mechanical keyboard – it’s that noticeable. Lovely tactile feedback, but good grief does it make a racket. Again, this is something I’m willing to put up with for the increased comfort, but it may not be to everyone’s tastes.

For some, of course, customisation trumps all, in which case the Pulsefire FPS isn’t for you. For those after a comfy gaming mouse with minimum fuss and maximum chicken dinner potential, however, it’s well worth a look.