Finally, a proper ambidextrous gaming mouse (of the mice I’ve looked at, anyway). After the sort-of-but-not-really symmetrical designs of the Steelseries Rival 110 and the HyperX Pulsefire FPS, the Asus ROG Pugio is the real deal, offering right and left-handed comfort in equal measure.

It’s quite expensive as gaming mice go, coming in at £62 in the UK and $90 in the US, but much like the Asus ROG Gladius II, the Pugio comes with a number of handy extras to help make up for it. There’s no second USB cable, sadly, but you do get two spare Omron switches and a pair of side button covers.

The Pugio feels quite small after the Gladius II, even for my tiddly digits, so those with larger hands may not find it particularly comfortable. Indeed, standing just 37mm off the ground, it’s almost an entire centimetre shorter than its Gladius sibling, which makes the whole mouse feel quite low and flat. It’s still a good size for me personally, but it’s borderline to say the least. 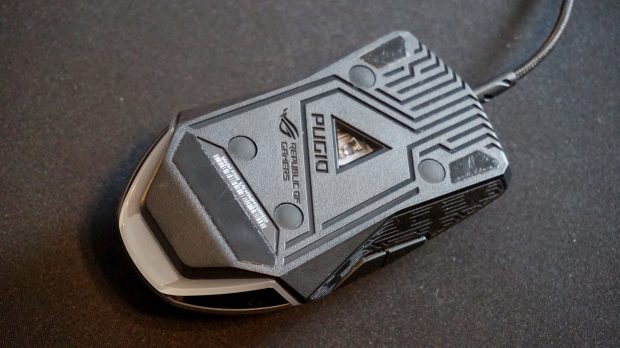 Then again, I’d rather have a slightly smaller mouse than a massive jumbo one like the Roccat Kone Aimo, as it makes reaching any potential side buttons a heck of a lot easier. Happily, the Pugio is almost perfect in this regard, as both pairs sat naturally under my thumb and little finger.

You probably won’t end up using all four of them, mind, unless you have a particularly adept and acrobatic little finger. If you do, then all the more buttons for you. Most people, however, will probably just use the two that fall under their thumb, whatever side that happens to be on.

By default, both pairs are set to backward and forward clicks for when you’re browsing the web, but you can assign all sorts of different commands to them by downloading Asus’ Armoury software. These range from multimedia functions and keyboard buttons to Windows OS shortcuts and your own recorded macros.

You can also use Armoury to disable any buttons you aren’t using, but a comfier and slightly less annoying alternative might just be to pop them off altogether and swap them for one of Asus’ bundled side button covers. Just dig in your nails under each button, and hey presto, their magnetic attachments allow them to come clean off. A tad worrisome for the heavy-handed mouse owner, perhaps, especially given the propensity for small bits of plastic to inevitably go missing the second they’re not attached to something, but at least Asus also provide a handy little carry case to keep them safe (provided that, too, doesn’t also get lost, of course).

Admittedly, I’m not particularly fussed about the side covers. They’re a nice concession for anyone with a particular aversion for unnecessary mouse clicks, but I’m sure most people would be perfectly happy simply disabling them in Armoury. I’d much rather have a spare USB cable like the Gladius II instead, for instance, but at least you still get a spare pair of Omron switches for the right and left click buttons.

The Omron switches already in the mouse should still last you a fair amount of time before you need to swap them out – they’re both guaranteed for 50 million clicks, according to Asus – but just in case they do happen to break, Asus have made it extremely easy to get the Pugio back up and running. Like the Gladius II, all you need to do is prise off the four little rubber covers on the Pugio’s underbelly, unscrew it and lift away the top. You’ll need to be a bit careful, as there’s still a string of wires connecting each half of the mouse, but swapping the switches themselves is an absolute doodle. Just lift them out and slot the others in. Easy. 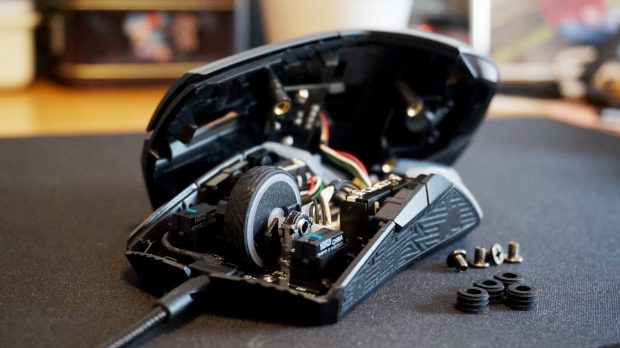 Elsewhere in Asus’ Armoury software you’ll find plenty of customisation options. Most of them you won’t need to touch with a barge pole, as I found the Pugio’s default setup to be perfectly good straight out of the box. For those that care about such things, however, you’ll be pleased to hear you’ve got acceleration and deceleration options to adjust the mouse’s DPI or sensitivity settings up to twice or half its normal speed depending on how fast or slow you like to move your mouse, polling rate settings from 125Hz all the way up to 1000Hz, response time settings from 4ms up to 32ms and angle snapping. You can also create up to three distinct profiles for the Pugio, which you can access by pressing the central DPI button on top of the mouse and either its side buttons or scroll wheel.

Speaking of that central DPI button, this lets you switch between two different DPI settings on the fly. Out of the box, it’s set to 1600 DPI and 400 DPI, but Armoury lets you pick any combination from a deathly slow 50 DPI all the way up to a much-too-fast 7200 DPI. For most people, 1600 DPI should be more than enough for everyday use, both when it comes to office work and gaming alike, but having a second, slower one can sometimes be handy for games where you’re trailing enemies down the end of a sniper sights.

Admittedly, I’ve never found these kinds of DPI buttons very easy to reach in the heat of the moment, and it made me miss the special DPI button by your thumb on the Gladius II. Still, while the Pugio’s DPI range isn’t as wide a range as the Gladius II, it does afford a smidge more flexibility. Whereas the Gladius II only let you adjust the DPI in blocks of 100, the Pugio lets you adjust it in increments of 50. Again, you probably won’t need to adjust it to that kind of insane degree, but it’s always nice to have the option. 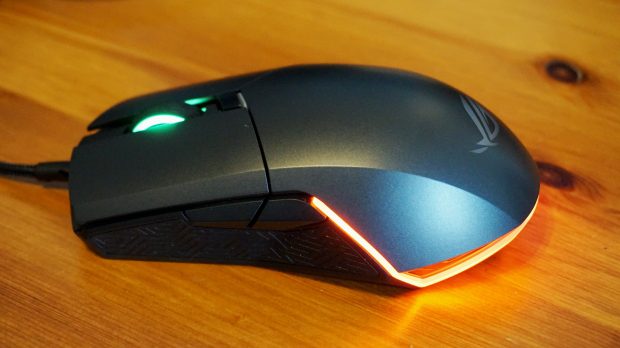 Download Asus’ Armoury tool and you can customise the colours, brightness and lighting effects of each RGB zone on the base, scroll wheel and ROG logo.

Since this is an RGB mouse, Armoury houses the Pugio’s lighting controls as well. You can always turn everything off if you so wish, but for those of you who can’t get enough of multi-coloured rainbow highlights, you’ll be pleased to hear you get all the same options as the Gladius II. This includes being able to customise each of its three individual zones with different colour schemes and brightness levels, as well as being able to sync your favourite effects across all your other Asus devices.

Overall, the Asus ROG Pugio is a great little mouse, albeit with a fair amount of emphasis on the ‘little’ part. It’s highly customisable, both in terms of its overall look and general button layout, and those extra switches make it better value for money than many of its rivals. As a right-handed person, I’d probably prefer spending just a little bit more on something like the £70 / $95 Gladius II to get that extra USB cable and slightly fuller fit under my palm (not to mention its handy DPI thumb button), but for lefties who struggle to find comfy gaming mice, it’s still an excellent pick.