Last August, Square Enix finally confirmed that the upcoming PC version of royal roadtrip Final Fantasy XV would indeed come with full mod support when it launches on March 6. At the time, though, the developers kept schtum about exactly what that might entail. Indeed, it was only over the weekend that we got our first glimpse of what a potential Final Fantasy XV mod might look like. Fancy the idea of turning everyone in party town Lestallum into adorable cactuars? Then you’re in luck.

Cactuar skins are all well and good, of course, but what else does the team have in store for budding modders? To find out, I sat down with director Hajime Tabata, technical director and lead programmer Takeshi Aramaki and game design and development manager Kenichi Shida and quizzed them (and their translator) about exactly that.

In fact, it was Mr Tabata himself who asked the first question. After catching a glimpse of the cactuar mod reveal video playing on a TV behind us, he said:

“What do you think of Final Fantasy XV looking like that?” To which I replied, “I think it looks good! It’s interesting. It would be better if there were some moogles as well, though…”

“Are there moogles in there?” Tabata asked Mr Shida.

“I mean, to begin with, we’re starting out with a very simple thing, just replacing the skins for the cactuars, but we’re looking to slowly expand out the scope of what we’re doing with mods and really introduce new things,” said Shida. “We’re going to move on and we’ve got other plans to maybe have different kinds of characters to be moogles, chocobos… We’re all working on all that. To start with, we’ve just got cactuars.

“When we were looking at making the Windows Edition of the game, and what PC gamers want, we really did see that there’s a large portion of the PC gaming community who really enjoy using mods and the freedom that they bring to gameplay. So we felt it was pretty much essential to give these people the mod support and the kind of freedom they wanted to see in that.

“We really want to keep it as free and open as possible to people, so rather than just telling people what we’re going to give them, we want to make an environment where people can be as free as possible to make their own mods. We’re planning to provide an official modding tool for that as well.” 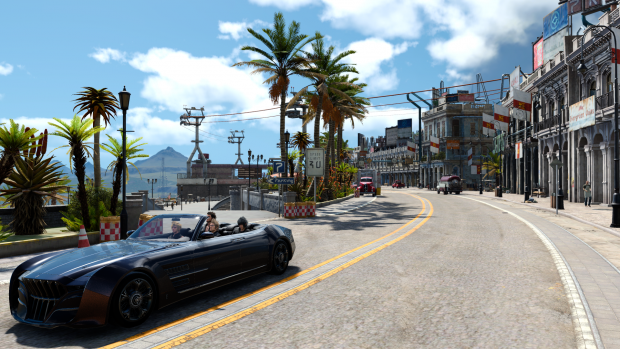 Fancy driving around in a Volkswagen Beetle instead of the Regalia? It might just happen…

The modding tool won’t be available straight away at launch, sadly, but Mr Aramaki assured me they planned to have it out “very soon” after release.

“We’re also trying to make [the tool] something where you don’t need any previous programming knowledge to do,” Aramaki continued. “Anyone will be able to pick it up and use it. At first it will be quite limited, with the ability to switch around costumes and reskin things in the game, but slowly we’re going to add more and more freedom to the tool to allow you to do different things. For example, play around with the story progression and the levels.

“We’re also going to start out focusing most of the mods around the single player content for the game and then gradually expand it to include things which may go into the multiplayer. First of all, if you have it on the single player, you’re not going to have things there that ruin other people’s gaming experience if it’s not quite right. That’s the right way of approaching it – starting out locally and then widening it.”

Tabata agreed: “We understand you’re worried and we’ve got our own worries about how things may fail or not work right, too. But the way we look at it, we feel that rather than worrying about what might happen and because of that not doing it, we feel it’s a better approach to go ahead and do it and try it. Then, after we’ve seen what the problems are, we’ll try and fix them. That’s the better way of doing it. I also think it’s really important that when the fans see this and touch it, they can give their feedback back to us and we can get that feedback loop and hear the voices of the users.”

Stay tuned later this week for my full interview with the Final Fantasy XV team, including all the big questions like ‘What’s your favourite Ignis cooking dish?’, ‘What kind of PC does Mr Tabata have?’ and ‘Who is, once and for all, best boy?’