When you think of Dishonored, what’s the first image that comes to mind? Rats, blades, haunted hearts and clockwork mansions? Perhaps it’s cramped streets, a bleeding whale, or an arterial river. For many of us, it’s a city. We asked Rob Dwiar, a garden designer, landscape architect, horticulturist and writer, to look at a specific aspect of those cities. The gardens. There’s a whole lot of meaning locked in the green.

Across two (and a half) games, Dishonored has created an immersive world, rich with intriguing lore, place-specific atmospheres and a believable society. All of that is wrapped in brilliant, believably-designed environments, where a distinct sense of place is always present. Whether you’re exploring palaces or cramped city blocks, navigating mansions or slums, each area has a sense of authenticity as a lived-in space, and the effect is not entirely aesthetic. By looking at the gardens scattered throughout the Isles, we can see how their layered and meaningful design elevates their importance from pleasant environments to important displayers of in-game themes, reflectors of in-game characters and exaggerators of underlying narratives.

Maybe the finest residence in the series is The Duke’s Palace in Karnaca, and straight away it has a clear connection to a larger Dishonored theme: the seas. The people of the Empire of the Isles rely on the sea and its beasts for fuel, power and food, and as a result have a strong attachment and reverence for the oceans. Situating the duke’s palace on a coastal islet is reflective of that relationship: it is connected, literally, to one of Dishonored’s most powerful themes and elements.

Its exposed location means it is a prominent visual display of prestige and influence, and it visibly exerts the Duke’s power over the city through a statement in design. The fact that the palace is built into the rocky outcrop, subject to the full force of the natural elements, shows a desire to have control over nature, imposing a manmade structure on a natural coastal feature. 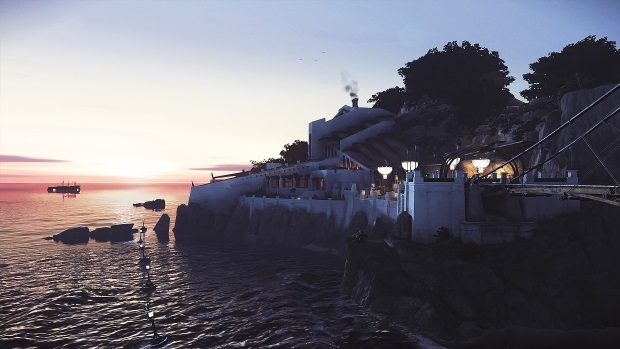 Combine this with maintaining views over the landscape and sea, representing his desire to further his influence, and this garden’s design has already encapsulated the duke and his status. When representation was heavily used in gardens, during the Renaissance for example, it is widely accepted and understood that visitors would have understood the symbology on show. It is safe to say that this would be the case here, with visitors immediately understanding the meaning of the design of the Duke’s private paradise. 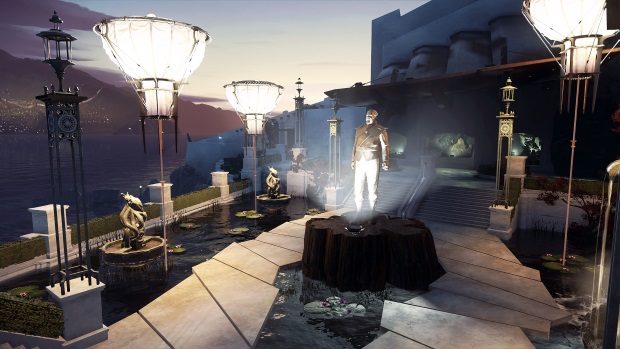 The enormous back garden is a triumph in design, both aesthetically and in its meaning. The implementation of strong geometric shapes, as well as reinforcing the architecture of the building, exaggerates a theme of control and order in the design, and completes a total aesthetic and design approach. This aim for perfection through design is often seen in the gardens of the powerful: it constantly reminds the guest whose company they are in and how much power they have. Strong lines throughout evoke a sense of order and alignment, never interrupted with soft or informal curves, and are further accentuated and reflected by massive overhead pergolas – which also show a mastery of construction.

As well as reflecting a culturally-appropriate closeness to water again, the control of water can be seen as a pivotal, representative feature in gardens. For example, fountains and rills were often used in the gardens of cardinals to represent their journey, or desired journey, to become pope. As a result, there is often meaning behind the direction or length of a water feature or the number of jets in a fountain display; there must be a significance to the number of waterfalls in the Duke’s main water feature. His statue in the centre certainly represents his power generally, but also directly, over water, and, by extension, the seas. 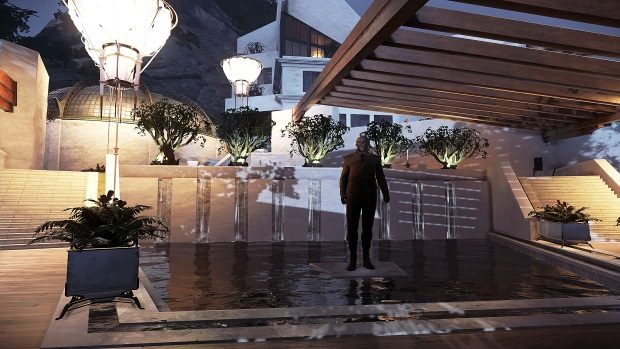 All over the garden, opulence oozes from the design: the materials used are clearly of the highest quality and the plants chosen are obviously rare and expensive – massive olive trees, gnarled and characterful, mature hedges and unusual looking, bromeliad-esque plants. This demonstrates exotic tastes, and an overt need to show off his and his palace’s glory through the collection of fine and rare plants. This is reinforced by white and reflective materials seemingly draped over the whole design. As well as being a genuine Mediterranean design feature, the shiny, reflective tiles and white render walls help to accentuate the ‘Teflon nature’ of the Duke. Nothing sticks to him, getting away with cruel and unfair rule, and remaining untouched by blood flies while the rest of the city suffers.

Even in passing and from the outside we can appreciate the meaning of Dishonored’s gardens. The Boyle Mansion uses its location to demand attention and invoke jealously from the outside and the neighbours. It’s clearly designed to boldly stand out from the grey monotony of the streets by showing off colourful plants, tall trees and lit-up garden spaces. The fact that all this can be seen from the exterior is revealing in itself: its visibility clearly designed in for the ‘benefit’ of passers-by and neighbours, increasing their sense of jealousy toward the Boyles.

This perfectly mirrors the in-game character of the Boyle sisters, constantly worried about perception and status. It also strikes a chord with the state of Dunwall, the garden matching the wealthiest residents’ ability to be full of life, near to the poorer peoples’ relentlessly grey streets and lifeless properties. 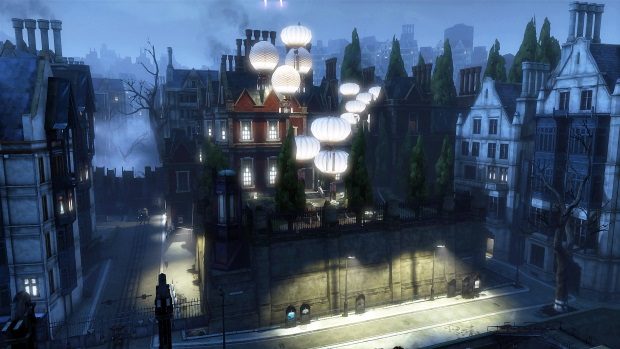 Aramis Stilton’s Manor’s designed-in meaning is more difficult to decipher due to its place in the plot and walled-in nature. Stilton is a wealthy man, somewhat quiet and reserved but very much a friendly and fair man of the people. Elements of this are reflected in his garden. Lavish, to an extent, and clearly designed to be an impactful manor entrance, the front garden reflects him and his character. The generally open layout, with simple and loose planting, mirrors his quiet friendliness: the entrance area is not imposing and feels relatively informal due to the absence of overt symmetry or ruthless geometry.

The sunken nature of Stilton’s back garden provides privacy and seclusion, at odds with the showy displays of the Boyle gardens. Descending down garden steps increases a sense of enclosure and escape. This impact is surprisingly instant, and people feel immediately transported to quieter, more private areas, when moving down, away from ‘ground level’. This reflects Stilton’s quiet nature but also his desire to be removed from the house where the séance is occurring – a subtle reflection of the wider story.

The other heavyweight garden in the series is at Brigmore Manor. The first element of designed-in meaning comes from the manor’s countryside setting. This enables the garden to employ the wider landscape as a design feature by merging it into the garden: elements that are obviously manmade and designed, such as planters and geometric patios, melt seamlessly away toward the garden’s rear and the wilder countryside beyond. This successfully culminates in a near-authentic natural, wooded glade setting complete with wild plantings and a waterfall. 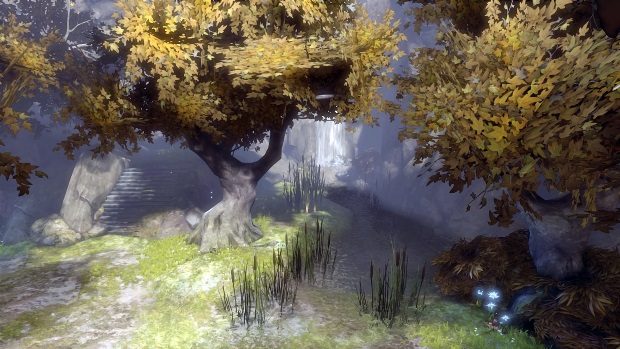 This merging of nature and man is a powerful garden design approach, and the importance of that is incredibly clear and surely deliberate at Brigmore: Delilah is a merging of human concerns and the wider natural world. Not only does she merge the two, but her powers are born of nature, so she is also a representation of a controlling of nature – delightfully mirrored through the manmade elements of the garden. The blurring of nature and the individual is also seen in nature’s reclamation of the land and the manor. Overgrown and wild plants slowly strangling the manmade structures and disrupting the foundations is a direct reflection of Delilah’s nature-born powers, and her influence over Brigmore and her coven’s claiming of it.

The temple in the garden is a miniaturised version of a landscape gardening technique that provided a nod to gods and worship. How telling it is that one of Delilah’s statues is placed within, demanding absolute attention as a focal point but also worship from her witches. 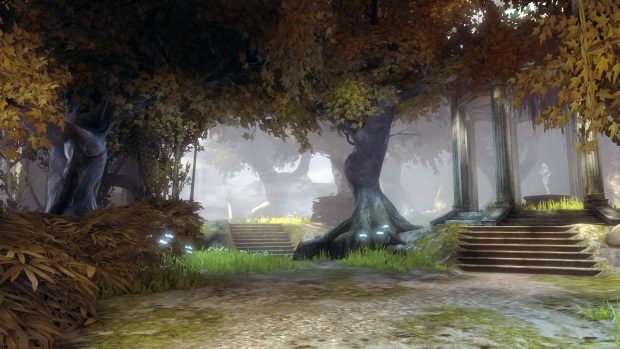 Brigmore Manor is so powerful in its design that it genuinely feels like you’ve been transported to Delilah’s ‘land’. You could be forgiven for believing that this was her home not just the adopted base for her coven. This feels like a deliberate choice to reinforce the themes of the story, Delilah herself and the importance of creating a very particular place for the plot’s climax.

The gardens of Dishonored are important, powerful pockets of wondrous game design; their individual style and composition layered with meaning, that all contribute to a complete and cohesive world aesthetic. Their ability to support underlying themes, characters, societal statements and styles, is what makes for such a rich world. This effective execution of the art of placemaking creates distinct spaces with atmosphere and meaning beyond being a stealth-murder sandbox, and the design impacts our experience. Alongside the more commonly used ways that games tell stories or reflect themes through lore and environmental storytelling, the broader design of their spaces is where some of the most interesting and undervalued methods are to be found.

Dishonored: The Knife of Dunwall