We know that a third map is officially in development for Playerunknown’s Battlegrounds, but we don’t know much beyond that. Where will it be set? What sort of landscape? Which unique quirks will it have? And vehicles, and weapons? One Swede has made his case for a snowy Scandinavian map with an impressive concept called Nördheim, overflowing with ideas from blizzard hazards and breakable thin ice to hovercraft and traces of a black metal gig. As fan concepts go, it’s real fancy.

Pitch fella Nils Westgårdh, who’s a professional art director, tells us he and a pal had the idea for a Scandinavian map together then he spent over 100 hours putting the concept together. I used to just sketch ideas on torn-out maths exercise book pages but he made a whole chuffing website.

Nördheim is a comprehensive concept. It considers every aspect of what makes Plunkbat maps distinct, then gives it a Scandinavian twist. Obviously there are forests, mountains, an airport, a shipyard, and other obvious Plunkbits, but it also nicely reflects more-modern elements of Scandinavia. Wooden churches and ski resorts sit alongside a data center and an Ikea. One spot is a seed vault, like the Svalbard Global Seed Vault in Norway. 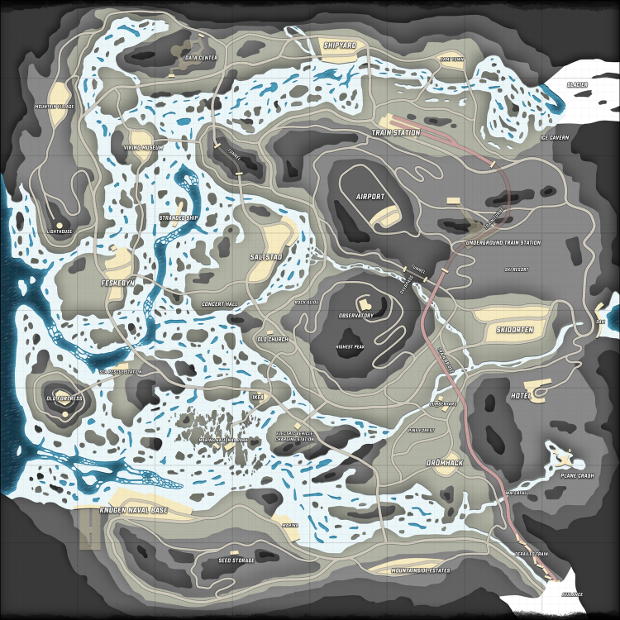 This land of mountains and ice fields would bring new threats. Cold water would reduce how long players could stay submerged. Thin ice would offer opportunities, supporting players on foot and in lighter vehicles, but could be destroyed beneath you. Blood trails would linger for a minute, so we could track wounded players (that feature actually appears in the upcoming Mavericks: Proving Grounds). And the red zone circle of bombdeath would be replaced with blizzards seriously reducing visibility and making a heck of a noise.

I’ve been sorry to see Plunkbat remove most of its map variants, taking out the foggy and rainy versions of Erangel when the game hit version 1.0, so I’m glad to see them considered here. Along with clear days and purple sunrises, the concept suggests light snow reducing visibility past 200 metres and nights lit up green by the aurora borealis.

And then Nördheim suggests vehicles from snowmobiles to an all-terrain truck like the Volvo C303, guns from European manufacturers, and of course a crate of Nordic cosmetics.

It’s jolly impressive. I have enjoyed looking at this and daydreaming about the idea.

If I were to callously treat this as a serious development pitch, the main criticism I’d have is that it perhaps dreams too big for Plunkbat, with a number of landmarks that are too unique and systems which deviate too much from the standard formula. As much as I like the game, it just isn’t this fancy. And some bits are technologically overambitious for a game still struggling with client and server performance. But it’s a dream of a map, not a business pitch, and it’s a dream I like. Dream big, baby!