Check back in with Rattay’s bailiff to initiate this quest, which sees you giving jobs to the Skalitz refugees. In short, he needs a cook and five porters: three to carry water, the other two to empty the latrines. (You don’t want to get those jobs mixed up.)

Talk to Alex from Skalitz

Like so many of the refugees from the bloody events in Skalitz, Alex is currently begging on the streets of Rattay. He gets around during the day, but if he’s not at the market, look for a kneeling beggar elsewhere in the centre of town. Alex knows a lot of people from Skalitz looking for work, and offers to gather them up for you in front of City hall. He suggests Agnes as the cook, who is currently working in the rectory.

Talk to the Konrad Hagen

Hagen’s shop is across from the grocer, next to the bakery. He’s the one searching for a cook, and after you learn of the qualities he’s looking for, it’s time to go and recruit Agnes for the job.

Find Agnes at the church

You’ll find her in the church in the northwest part of the city, during the day. She’ll need a bit of persuading, but if you go and talk to Father Francis, and tell her the news that he won’t be returning to the parish, she’ll happily leave and take the job as Hagen’s cook.

Distribute work to the refugees

After a short while, you should receive a message informing you that the jobseekers have gathered in the town hall’s courtyard. (There will be a very accurate quest marker pointing there.) Once you arrive, address the beggars and you’ll be given the opportunity to ask a series of questions, so you can work out how to distribute the jobs. Some offer rewards if Henry gives them the job, including Rock, who will tell you of silver in the Skalitz mines, and Kornelius, who will give you better prices at the Sasau blacksmith.

At some point, a woman named Antonia will run up and speak to you. Since the job as cook has already been taken, the only job left is carrying water. Her story isn’t a cheerful one, and she could do with the money: her wounded husband lies on his deathbed. Keep her in mind for your conversation with the bailiff.

If you hang around in the market, Theresa may appear at some point to tell you that nobody needs the job more urgently than Antonia. 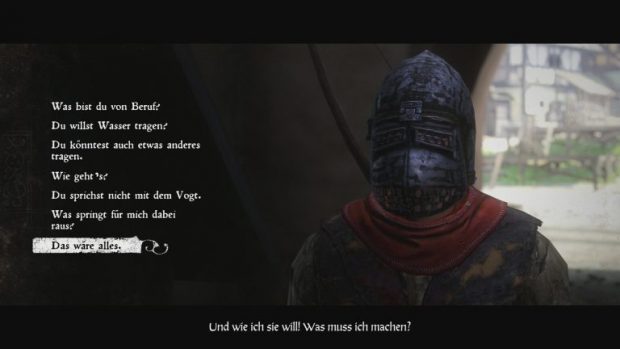 The conditions that advance the quest now are a bit obscure. You must have talked to all interested parties before the diary will update, and if it looks like you’ve missed some, head back to the town hall square and go through all of the dialogue until your journal updates.

Eventually you’ll be given the task of talking to the bailiff, and assigning each job to a person. He very much relies on Henry’s opinion on the matter, so it’s up to you to decide who will carry water and who will empty the latrines. The Rock is the only one that seems eager for the latter job, but Antonia should definitely get the water job. Lastly, appoint Agnes as Konrad Hagen’s new cook to conclude this side quest.