At some point late in the game, Sir Hanush in Rattay will have a quest waiting for you (look out for the star floating above his head). He has a problem that only Henry can help with, regarding a vicar who has allegedly turned up in the region to hunt down heretics. Hanush doubts the vicar, and wants him to scram back to Prague.

A word of caution before you begin: the entire quest is time-sensitive, which the game doesn’t bother to tell you about. Start doing the quest immediately after taking it on and you should be fine, but don’t get distracted with other tasks along the way.

Talk to the vicar

The vicar in question is staying in Uzhitz, where he often sits on a bench near the local church during the day. Talk to him and he’ll fill you in on his investigation – he’s been tracking down so-called heretic Waldensians after one was arrested and interrogated for information. The vicar is only too happy to hand the man’s testimony over to Henry, which relays the miserably long route to the Waldensians’ meeting place.

Dispose of the vicar

You can either agree to find the heretics for the vicar or not, and if you’re not in the mood, Hanush will tolerate – with some persuasion – the vicar being ‘removed’ by another method. Such as: killing him. It’s not easy to off the holy man, as he is generally surrounded by two guards, but if you find a suitable moment, such as at night-time, then you can kill the vicar and ride back to Hanush for your reward.

He won’t be entirely enthusiastic about your methods, but if your speech values are higher than his, you can appease him and end the quest without having to hunt down those heretics.

Let’s assume you didn’t do that, and that you aided the vicar in his holy quest. Now, you could follow all the clues and approach the meeting place step-by-step as the developers intended, or you could save yourself a heap of trouble and just look at the map below. In short: the Waldensians’ meeting point is located northeast of Uzhitz. Follow the river that runs north from the town until it broadens further up. To the west you’ll find a small, outward-looking forest clearing. That’s the place. 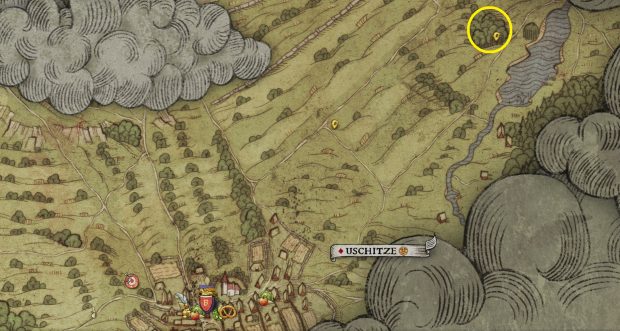 Approach the eye-catching tree in the clearing and take a look at the small tree-trunk-shaped altar in front of it, where you’ll find a wooden cross. Grab it and Henry will remark that someone from the village might recognise it. 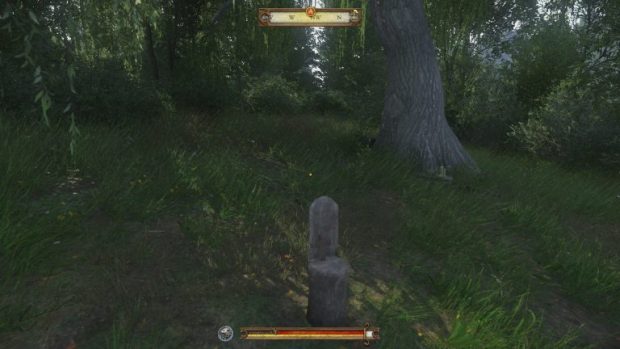 So it proves when you return to Uzhitz and ask the first person you see. They’ll direct you to your old drinking buddy Father Godwin, who as part of his sacred duties blesses all the crosses in the houses here.

After a brief conversation, he informs you that the cross belongs to the Bauer family, who he very much doubts are heretics. Still, it won’t hurt to spy on their prayers, in order to confirm things. They meet in the evening at their farm house, which lies beyond the fields southeast of Uzhitz.

The vicar, who is big into eavesdropping apparently, suggested hiding in their attic, but you’ll have to sneak through the farm in order to reach it. Come here in the early evening and you should be able to climb to the attic without too much trouble, by ascending the ladder at the side of the main building. 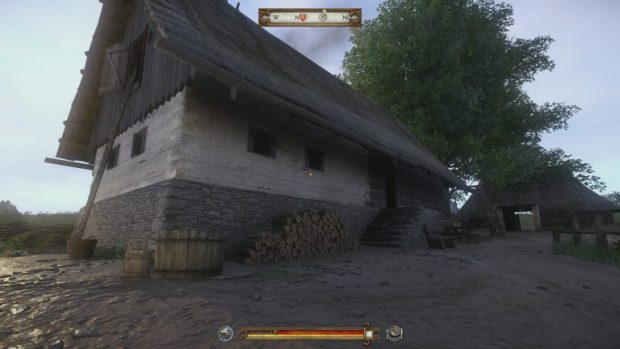 Let some time pass, until about 9:30 pm, and the Bauers will gather at the dinner table. They don’t exactly practice satanic rituals or anything, but as you can witness, they do possess ‘heretical’ beliefs. You have a number of options now:

You can tell the vicar, who will give you 325 Groschen in gratitude, and put you in good standing with the church. Hanush won’t exactly leap into the air with thanks, but he’ll be satisfied with the outcome, as the vicar will be gone.

Or you can turn to Father Godwin instead, who says that you should persuade the farmers to flee. Go back to the farm now, and talk to Mrs. Bauer. You’ll need extraordinarily good persuasion skills to convince her (better than 13/6/2), otherwise you will fail in your attempt.

You could also talk to Mr. Bauer about the situation, telling him that you will kill the vicar. It’s certainly an option, as described above, but if you go down this route, maybe keep it a secret from Hanush.