This side quest has to do with Theresa, niece of Miller Peshek back in Rattay. If you’re interested in courting her, you’ll find Theresa at the mill during the day; ask her how she is, then suggest going for a walk. Eventually she will agree, opening up a trio of suggestions including a stroll down by the river. Pick that one. The quiet walk will eventually transform into a friendly race.

It doesn’t seem to matter whether you win or lose, so don’t worry if you start to lag behind. After a few hundred metres or so, Theresa will look for a place by the water to sit for a while. Sit down and chat, although be aware that you’ll need to pass a couple of Speech or Charisma checks for her to agree to a second date.

After a few days have passed, return to Theresa and ask her if she’d still like to go for that meal – you’ll know when the time is right because the quest log will automatically update. She suggests the Broken Wheel tavern, although your pleasant evening is soon curtailed by the arrival of a drunkard who begins to attack Theresa. Beat him up until he forfeits.

After tending to Henry’s wounds, Theresa and Henry return to the mill, where they share a goodnight kiss. 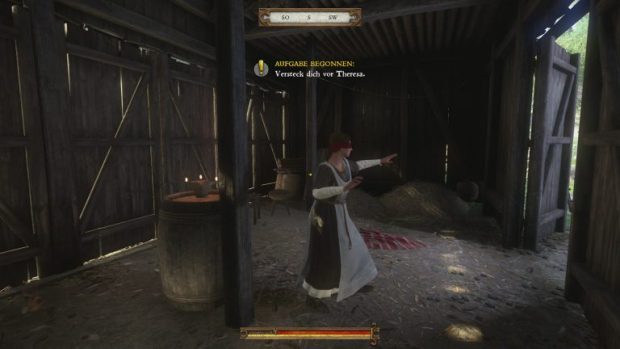 After another few days have passed, you’ll receive a pop-up telling you that Theresa is ready to see you again. Return to her and she’ll suggest a game of Blind Man’s Bluff, because cinemas sadly haven’t been invented yet. You can either let Theresa win or go and hide in the corner until she loses – it makes no difference to the outcome, although the second one is kind of cheating.

In any case, the sudden arrival of rain prevents another thrilling round, as there is laundry hanging that needs to be brought in. Or rather, it was hanging. Several aprons have tumbled carelessly to the ground, meaning that your next objective is to pick them all up. Once collected, follow Theresa into the barn, where the pair will spend the night and the quest will end.

Continue with: Kingdom Come Deliverance: Playing with the Devil