East of Sasau lies a mill – you’ll see a map marker if you’ve already been there, but it shouldn’t be too hard to find if you’ve not yet had the pleasure. Talk to the miller, who tells you of a trapped Cuman he’s eager to question – unfortunately, neither he nor any of his servants speak Hungarian.

According to the miller, there’s a sawmill further down the river where one of the workers has been heard to curse in Hungarian, so that sounds like the perfect place to head to next. To find it, head northeast along the river for a few minutes – you can’t miss it.

Look for a labourer in green clothes – this is Miller Simon. Tell him there’s work going, and after a bit of cajoling he’ll follow you back to the other mill.

Talk to the trapped Cuman

Once you’ve returned to the first mill, talk to the laborer again to begin the interrogation. It proceeds largely automatically, aside from a few decisions Henry will have to interject with. (Offer the Cuman freedom, then urge him to make a statement.) While all this is going on, Henry can’t help but notice that the translator is acting a little…oddly. He claims that Hungarian is a difficult language to translate, but Henry has his doubts.

Use your speech skills to reveal that the translator has been lying to you, and that amongst his other dialogue the Cuman has revealed the location of, sweet, some buried gold. The labourer eventually gives you detailed directions on where to find the hidden treasure.

The translator’s instructions tell you to cross the river from Rattay, to follow the hill, to go towards the city, and then to take the first road, before you come to an intersection near a burnt tree. From there a path leads into the water, where on the right you’ll find a hollow stump containing the gold.

Start from the broad river north of Rattay’s mill, before heading north. Look to the west and you’ll see the aforementioned hill (with white flowers on it). Cross the bridge near the mill, then stay north on the path indicated on the world map. You’ll discover a shrine at an intersection. There the path branches off to the west; follow it to the next fork in the road, which is also marked on the map.

From there walk almost exactly due north, where you will come to the famous burnt tree. In front of it is a sack with a nice pile of Groschen inside, along with some armour, a weapon and other bits.

This isn’t the actual treasure, however. You’ll find that at the spot pictured below, in the yellow circle. It’s not exactly in the location specified by the translator, which is a bit perplexing. Inside you’ll find an antidote and 200 Groschen; you can choose to share this with the miller, or to keep it for yourself. The quest ends either way. 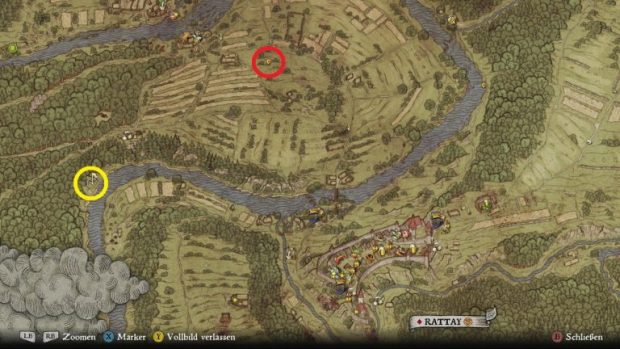 If you prefer, you can convince the Cuman to lead you directly to the site of the buried treasure. However, for some reason the quest may fail as soon as you secure the loot and bring it back to the miller, so it might be better to find the place on your lonesome – or better yet to follow the Cuman to the location, before reloading to discover it for yourself.

Continue with: Kingdom Come Deliverance: Next to Godliness.