The starting point for this quest is the village of Uzhitz, which you should be familiar with by now. Near the fields in the south of the village you’ll find the stable master with his animals. Talk to him to discover that one of the horses – their fastest stallion, Pie – has gone missing.

Talk to the stableboy, Vashek

The master’s assistant knows a little more about the matter. You’ll find him nearby, but he won’t be up for discussing it right away, instead suggesting that you meet him in the local tavern that evening for a few drinks. 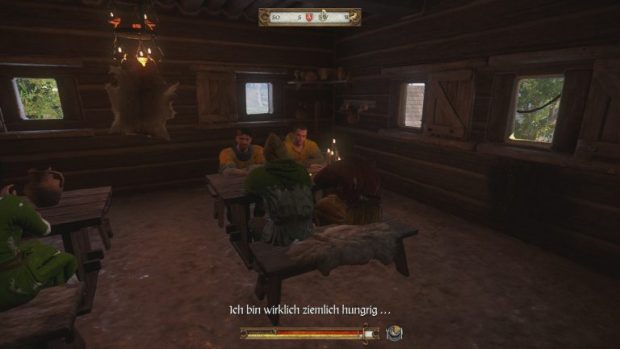 Join him at the time he suggests and you’ll learn that Pie is especially speedy (although you already knew that), but also the location in which the horse bolted from Vashek. That dreadful event happened at the crossroads south of here, between the fields and the forest.

Go to the intersection

The quest marker for the crossroads will appear on the map, so you don’t have to spend an eternity searching for it. When you reach it, you’ll see…nothing suspicious at first glance, although if you sniff around a bit more you’ll see some horse dung leading to the southeast. Back in the tavern, the stable-boy mentioned that the horse is more used to riding on bridle-paths, so head to the one nearby and you’ll be reassured by the appearance of even more dung. 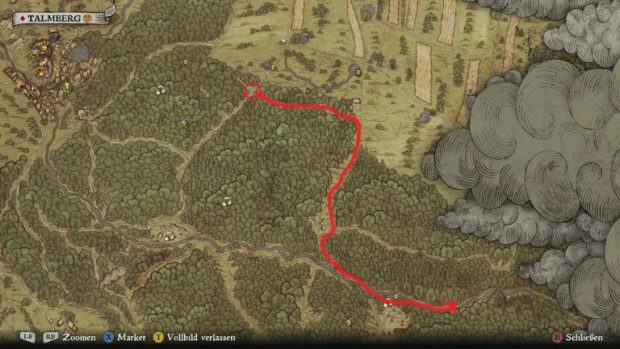 Eventually you’ll come to a small fork in the road, which we’ve highlighted in the picture above. Follow the track to the right, and at the next fork the forest path should bend around to the south/southwest. You’ll know you’re on the right track because you’ll come across yet more horse poop.

Search for Pie near the creek

At the side of the trail you’ll meet a wanderer who can provide further information: according to him, you should continue south to the river, and then follow it upstream to the east. (A yellow search radius will appear on your map there.) You’ll find a Coal-Burner camp at this location, where you’ll learn that Pie passed by here, before heading further up the river. One of the burners, Thistle, ran after the animal, and has not returned so far. 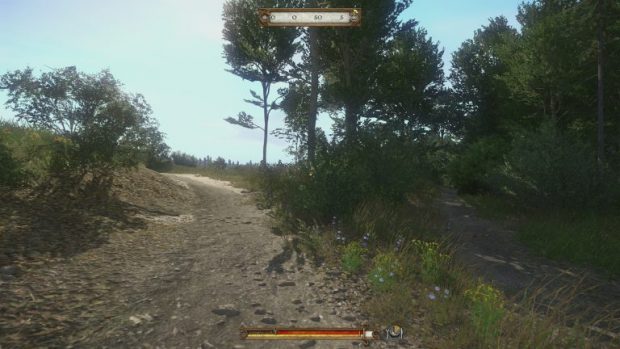 Before you head off from the camp, look around here and you’ll find a basket with some Saviour Schnapps inside – a nice little bonus. Now follow the river upstream, to the east, keeping your eyes on your left-hand side. You’ll find Pie waiting almost at the eastern end of the yellow circle, in the undergrowth.

Return Pie to the stables

Thistle’s here too, however, and the prickly thief won’t give up Pie without a fight. A fist-fight, luckily for the Coal-Burner, and once he’s ready to concede defeat, you can mount the steed and gallop it back to the stables. Deposit it at the yellow marker there and talk to the stable master to claim your reward: a handful of Groschen and a saddle bag.