Kingdom Come Deliverance: All that Glisters

The previous quest, Questions and Answers, was rather intricate, closely linked to the side quest Pestilence. Whatever occurred during that, you will have received the prisoner’s letter and reported to Radzig, and now you should meet with this Menhart fellow to convince him to hand over the counterfeit coins. If you managed to save the prisoner, then you can now follow the trail to Rovna. If, instead, you plundered the letter from his corpse, you’ll first have to speak to the innkeeper at the Sasau tavern that’s just been marked on your map. Once done, the diverging mission will join back together.

Go to the place where the counterfeit money is being exchanged

The prisoner said that he was supposed to meet with the middleman near the camp north of Rovna. Following the ‘A’ marker will lead you to a forest crossroads, where you’ll discover that you’ve arrived here too late. You find only dead bodies, and naturally a few possessions to nick.

Examine the broken wheel next to the cart, and then the bloodstain. Someone has been wounded and dragged away, so your next task is obviously to follow the blood trail.

Follow the trail of blood leading away from the wagon

Someone in the camp must have heard what happened to the cart, so let’s ask around. Speak to the Charcoal-Burner with the white shirt, who pretends to be ignorant, but with a bit of Persuasion (better than 0/0/7), you can intimidate him into giving you the information. He tells you to go and talk to Borya.

Borya spends his days in the adjacent camp just to the north, only a few meters away. He also says he knows nothing, but again with a spot of the old Persuasion, or with a 30 Groschen bribe, you can help to jog his memory. In short: the Coal-Burners aren’t responsible for the attack on the wagon, they only looted it afterwards. In addition, a survivor managed to drag himself to their camp.

Talk to the wounded man

Although the wounded man has paid the Charcoal-Burners not to let anyone near him, Henry remains persistent and manages to convince Borya to give him the key to his shed, where the survivor is hiding out. Either that or he cracks the Very Light wooden door, and bursts his way inside – the choice is yours. Inside, you’ll find the man lying on the floor.

This time the mercenary has no choice but to respond to your questions. Ask him about Menhart, about a knight that attacked the wagon, and his wound. Suddenly that knight appears on the scene, swanning into the camp before making off with the bag of counterfeit coins. Climb onto your horse and chase after him, ASAP.

The pursuit will get a little tricky as he speeds north/northeast through the forest, so take care that your own steed doesn’t get caught on any of the branches, bushes or stumps that will surely get in your way. Stick to the ‘A’ objective marker, and when it seems convenient to intervene, do so by firing an arrow at the knight’s back, or by pulling out your sword and riding close to him so you can attack him with your blade. When you catch up to the knight, he’ll get off his horse and challenge Henry to a duel.

Eventually – providing he doesn’t kill you, of course, Ulrich the knight will concede defeat, where you’ll be given the choice to either spare him or finish him off. Spare the man to learn that he is, in fact, on your side, and likewise searching for the counterfeiters – he’ll give you some documents to deliver to a Tobias Feyfar.

If you don’t catch the knight in time, you’ll meet him again in the tavern in the northern part of Sasau. He’ll say he’s ready to talk, but not here, inviting you to meet him at a spot southwest of the inn (marked on the map). It’s an ambush, obviously, though if your speech skills are up to snuff (better than 11/12/17) you can talk him down. If not, you’ll have to fight him, before the game again gives you the choice whether to spare him or finish him off. Depending on your choices, you’ll either have been given the documents by Ulrich or taken them off his corpse, and you may now ride out to meet Tobias Feyfar at Rattay.

Give Ulrich’s documents to Tobias Feyfar

You’ll find Tobias at the lower castle, in his room (if the door is wrongly labelled as locked, just restart the game). Talk to him about the fake coins and about the goings-on in Rovna, before finally handing over the documents. The trail now leads to a noble family named the Rosenbergs, and to a silver amalgam that is being used to produce the coins. Optionally, you can choose to check in with Ulrich afterwards, who is still at the tavern in Sasau.

Refuse Ulrich an interim report and he’ll tell you that the necessary material for the counterfeiting lies in the Sasau monastery, where the monks complain of getting no sleep because a blacksmith insists on working through the night. Hmm. In addition, a fresco painter is waiting urgently for a delivery of mercury from the monastery. Things are beginning to add up.

That sounds like a good starting point for our investigation, so let’s go and talk to the fresco painter who, as luck would have it, is only a few meters away in the same tavern as Henry. Ask him about the mercury and he’ll pass you onto the monastery’s overseer – however, before you go, know that you can trade with the painter for the book Life in the Tavern II, and Treasure Map III.

Continue the investigation in the overseer’s office

During the day, you’ll find the overseer traipsing around the monastery grounds. Your inquiries about the mercury go nowhere with him, but he passes you onto his assistant, who wears a yellow top and also spends his days walking the monastery grounds. Initially, this guy is as tight-lipped as all his monastery mates, but you know what to do by now: use his persuasion skill (if it’s better than 10/12/5) to get the yellow-topped berk to open up. Eventually he’ll tell you about a knight and his entourage, which includes a farmhand named Rapota.

Talk to Tobias Feyfar about this, who since your last meeting has arrived in Sasau’s southern district. He tells you to focus on a master engraver named Jerome, who operates out of a workshop in the northern part of Sasau.

The workshop lies northeast of the tavern, and south of the monastery. You’ll find Master Jerome at the top of a flight of stairs, where he’ll talk your ear off about his apprentice Florian, who didn’t turn up to work today. Your next task, therefore, is to find the paranoid-sounding Florian, who sleeps in the Beckers’ basement. Jerome also mentions a woman from the bathhouse that Florian was seeing.

You’ll consequently get two new goals: ‘talk to Florian, the engraver’s apprentice’, and ‘Talk to the Madam of the baths’. The latter is a purely optional conversation offering some background information about Florian and Esther, and how the latter individual was recently abducted.

You know that Florian lives with the baker, so let’s head there (and maybe buy a loaf, if we’re feeling peckish). Enter the building through the small door facing the street, where you’ll find the apprentice – hey, that was quick. He denies being involved in the whole affair, before admitting that Esther has been kidnapped, and pleading for your help. If you have the necessary persuasion skills (better than 5/8/9) you can skip having to do a side quest for Florian, otherwise you’ll need to complete the Kingdom Come Deliverance: Damsel in Distress“>Damsel in Distress quest before continuing with this one.

Once you’ve completed said quest, Florian tells you about a man named Rapota who has been following him around. If you want to skip a lot of bother, as you look for him, know that you can find Rapota right away. He stands nearby as you talk, leaning outside the neighboring grocery store, or if not there, then sitting on a bench in the yard. Talk to him and he’ll take flight to the northwest. Chase him down, won’t you?

When sprinting, he’s just as fast as Henry, so to make Rapota stop you should run up close and draw your sword, an action that will cause him to fall to his knees. If this fails, and he manages to climb on his horse, then do the same with yours before whacking him with your blade. When he finally stops running, talk to him to learn of a counterfeiters’ workshop, operating out of a mine somewhere in the Skalitz hills.

Find the entrance to the mineshaft in the Skalitz hills

If you prefer, you can chat to Ulrich now and ask him to accompany you to the mine, which changes the rest of the mission a fair bit. With him in tow, you’ll travel automatically to the mine’s entrance, but the knight will also tackle the ensuing bandit mob head-on, making sneaking around much more challenging. However, with Ulrich occupied with the bandits in front of the mine, you’re free to run past them all until you reach their leader, Jezhek, where your pursuers will suddenly lose all interest in you.

By the way, there are several additional entrances into the mine. Pay attention to your map and you’ll see a few other, less guarded ways to get inside. We recommend taking the entrance marked in red in the image below. Light a torch and follow the arrows painted in chalk on the wall, as all the other ways end in dead ends. Climb the ladder on your right when you reach it, and you’ll be taken to Jezhek with no bother. All that matters now is whether you’ve come alone, or brought Ulrich with you. 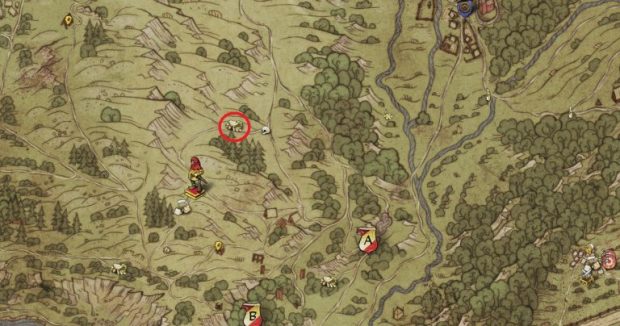 If Ulrich is there: the old knight wants to kill Jezhek. If you have sufficient speech skills (better than 9/11/19), you can convince him not to, otherwise you’ll need to fight Ulrich too if you want Jezhek to live.

If you’re alone: you’ll have to face Jezhek yourself. With a shiny enough silver tongue (speech skills better than 7/13/20) you’ll be able to convince him to go with you; otherwise, you’ll have to fight the man. Spare him when he yields and he’ll accompany you peacefully to his interrogation at Rattay.

Jezhek, safely locked up in the dungeon, asks to see Henry, so fast-travel there after you arrive in Sasau. Get the key from Captain Bernard (you’ll find him at the battlefield near Rattay during the day), before heading to the town hall square and using it to gain access to the dungeon underneath. There are three cells down here, and Jezhek is in the leftmost one. When you talk to him, he’ll tell you everything about the counterfeiting, including who exactly is involved – finally. Present your findings to Radzig, and you’ll be rewarded with 175 Groschen, and with a blessed end to this miserably long quest.

Back to the main Kingdom Come Deliverance walkthrough