After the intro, you find yourself in conversation with your mother. You’re in the town of Skalitz in Bohemia, and the year is 1403. Your responses during this initial dialogue sequence will affect the default statistics of Henry, the game’s protagonist. It might not be entirely clear what will change as a result of these choices, so here’s how all that breaks down:

At least at this point, the decision is not hugely important as it mainly influences the beginning of the adventure. Later, you’ll be able to develop Henry in any direction you so desire. Pick whichever option you like, and that will bring the conversation with your (strikingly young-looking) mother to an end. You’ll be given a few tasks to perform, but before you head off be sure to grab and eat some food (there’s plenty lying around the hut). Henry’s belly is rumbling, and he’s going to need his strength.

Go to your father

Leave the house and go and speak to your father, who runs his smithy a little way to the northwest. For the first time in the game, you’ll be able to use the power of persuasion to advance a conversation in your favour. This being the first time, you can’t do anything wrong here, so just pick the option with the highest value (visible at the bottom-right of the screen). Dad sends you off on a series of errands: collect a debt from the town drunk Kunesh, buy some charcoal from the market, pick up a cross-guard from the castle, and finally, some beer from the tavern. Let’s get to work. 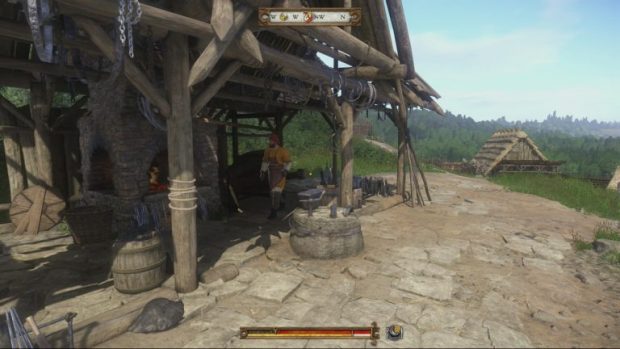 Collect the cross-guard from the castle

From your father’s forge, go to the right and follow the path along the wooden outer wall, where you should pop straight out at the castle. Speak to the gatekeepers Jaroslav and Janek, who will eventually hand over the cross-guard.

Now run northeast from the castle, which will take you into the village. Point C on your radar marks Kunesh’s house – during the day he is usually busy chopping wood in front of his home, if you can’t find him. Talk to Kunesh about the debt and urge him to pay at least for the axe and hammer, which he’ll refuse. You may now attempt to persuade him, although this will be difficult and will result in a fist-fight if you fail. Thankfully you won’t die if Kunesh beats you up, and your mother will happily patch you up if you head home – but it’s more than a little humiliating.

Best to find another way to get the tools back. The axe can be pilfered when Kunesh puts it down, but the rest of your father’s goods are behind a locked chest in Kunesh’s house. Sneak in and attempt to open the chest, and Henry will remark that his friend Fritz might be able to supply him with a lockpick. Fritz, along with the rest of your chums, can be found in the local tavern, which resides in the middle of the village.

Go and talk to your friends. Before Fritz will help you, you’ll have to promise you’ll help them deal with the German, before running after them to the man’s house in the southwest of the village. You’ll receive a last briefing there, before Henry is ordered to distract the German’s wife.

Tell her that her husband is causing trouble, and she’ll clear the way – simple as that. Henry and his friends proceed to fling shit at the German’s house, however his son soon gets wind of it and brings a couple of croneys with him to rough you up. With your best buds in tow, you should be able to win the fight without too much effort, and once you’ve done so, set off for Kunesh’s house to finally recover the merchandise. The old dog doesn’t stand a chance against Henry’s shit-slinging medieval justice gang, and will readily hand over the key to his precious chest. Once inside his dwelling, open the chest and take the hammer and nails. If you haven’t already done so, be sure to grab the axe in front of the house as well. 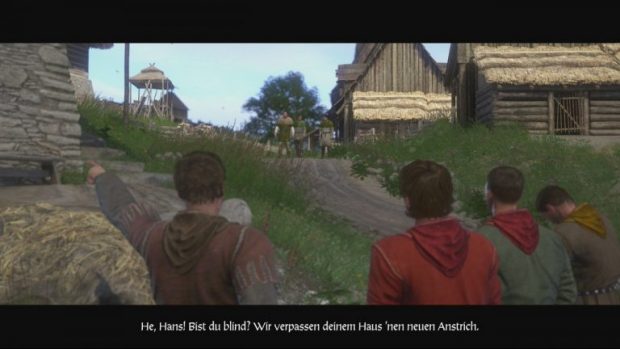 Buy a sack of coal from the market

Find the charcoal-burner and speak to his assistant to get the coal. Though you should have enough cash, feel free to sell any unwanted items to the merchant, and even to haggle a little bit if you’re feeling up to it. With your newfound wealth, buy ten pieces of charcoal.

Buy beer from the tavern

You know where the tavern is by now. Inside you’ll find your girlfriend Bianca, who works here as a barmaid. Talk to her to receive a pitcher of ale for your father, and also a free gift of three Saviour Schnapps (remember, you can use these to manually save the game). During the conversation, Bianca will mention that a mysterious man named Vanyek is looking for you. 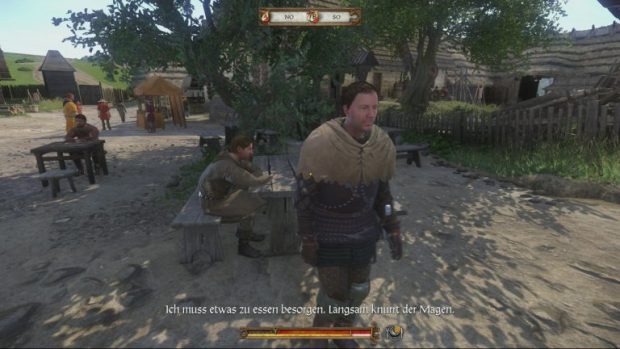 You’ll find Vanyek sitting at a table in front of the tavern. He’s eager to teach you the basics of swordplay, and while you can take him up on his offer now, it might be best to offer a quick hello, before agreeing to meet him later at the practice area at the south of the village – right after giving your father the beer. The reason for this is that the beer you’re carrying will become warm if you take too long dilly-dallying – and nobody likes a warm beer. Whenever you choose to take the swordmaster up on his offer, you’ll proceed to learn the basics of armed combat, including how to target and switch between body parts, and how to perform weak and strong attacks. Just follow his instructions and practice everything as often as necessary until you feel comfortable swinging a sword.

Return to your father in the smithy

Having gathered everything he asked for, run back to your industrious father and give him the items. If you’ve taken too long with the beer, you’ll have to go back to the tavern and buy more with your own money. Once everything is in place, the forging of Lord Radzig’s sword can begin.

Get the nails for Theresa

Afterwards, a woman named Theresa turns up looking for nails. Go back into the house and into the room on the right to retrieve them. You’ll find them in an unlocked chest, along with some other items you might want to grab as well. Return to Theresa and give her the nails to complete the quest. Lord Radzig himself arrives to admire the fine craftmanship of his new blade…before things take a turn for the unexpected. Go along with the story and Henry will receive a new main quest, the ominously titled Run!