This quest starts with Henry waiting outside the castle, after having survived the terrible events of the introduction. As the quest title suggests, running is the best option here, down the slope to the southeast, and back towards the village. Before long you’ll hear a woman crying for help: it’s Theresa from earlier, under attack from a group of soldiers. You can either leave her to her fate, or attempt to intervene (fear not, there’s a way to help her without having to defeat the soldiers). Startling them will give Theresa time to run away, but be sure to do the same thing yourself afterwards – you’re no match for any of these men, even with Lord Radzig’s sword.

You’ll see a few horses nearby. Jump onto the first one you see and gallop east out of the village, with Henry receiving an unavoidable arrow to the leg in the process. He used to be an adventurer like you until…well, I’m sure you’ve heard that one before. 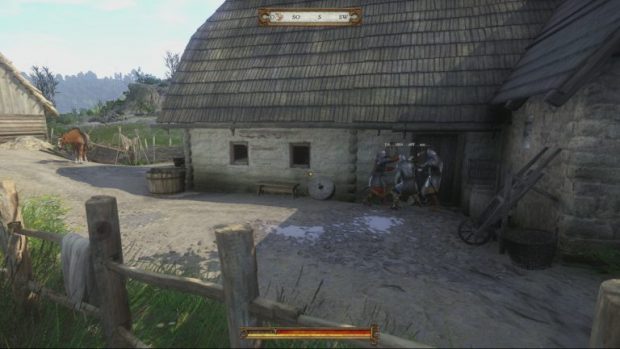 Continue in the direction indicated until Henry comments that Talmberg lies to the left. Follow the path past the countless fleeing civilians, and away from the riders chasing you, while keeping an eye on your horse’s stamina, so that you don’t overwork the poor frightened beast. After a few minutes you’ll reach Talmberg and trigger a cutscene, during which your pursuers will finally tire of chasing you. Phew.

As you leave the building, go down the steps to the right and talk to the armored man in the courtyard. Follow him into the kitchen and, well, stuff your gob with food – fleeing a village is hungry work. You might want to keep some food for later, although be aware that it will spoil if you leave it in your inventory for too long. Now, let’s find a place to sleep.

Go to the guardroom on the forecourt and sleep until morning

Exit the kitchen and enter the building just across the alley on the left. You’ll find a nicely decorated bedroom there that you can use to rest. Sleep until your energy reaches around 100. Lady Stephanie of Talmberg will wake you up for a friendly chat. You can decide if you want to report on the attack on Skalitz or not, and whether or not to omit all the gory details. Do so, picking the speech options at the top, to get in Lady Stephanie’s good graces.

You’ll return to sleep afterwards, before you’re woken once again – by Sir Robard. 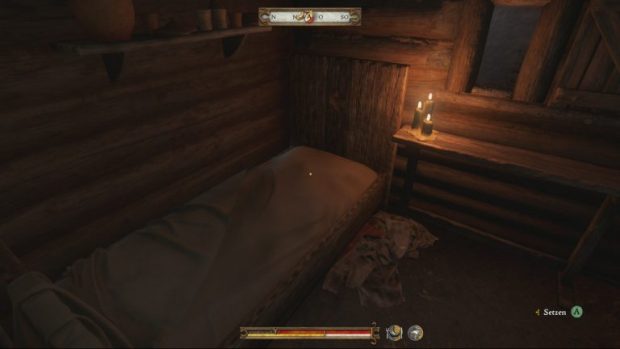 Join the garrison on the battlements

Grab the torch from the table in your room and leave the building. Run around it to the left, and make your way towards the lowered gate. On the left you can see some steps, proceed to climb them to finally reach the battlements. Speak to Robard again to trigger a cutscene where Lord Radzig suddenly turns up, having survived the attack on Skalitz. He wants you to stay here while he marches out with his men, and good Sir Robard is only too happy to put you to use. You’re to patrol the battlements, for several long hours, with his men.

Keep watch on the battlements

Thankfully, waiting in this game is a whole lot easier than in real life, thanks to your ability to fast-forward time. A nearby guard will show you how to use the Wait function, and unless you’d rather stand there picking your nose all night long, it’s best to use it to advance the time of day until around five in the morning. 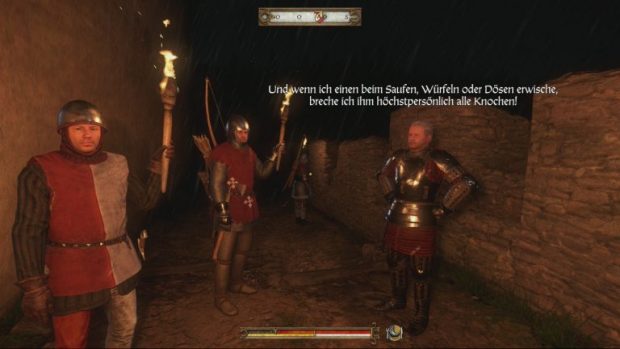 Suddenly there’s turmoil. The guards are mobilised as they rush headlong to battle, and while at this point you would probably rather hide in a nearby cupboard until the whole thing blows over, you should follow them to the village and beyond. Sigismund’s army has advanced upon Talmberg, resulting to a tense standoff that ends…huh, peacefully. For now, at least. Now, to get out of the castle.

Robard isn’t keen on you returning to Skalitz; you can attempt to persuade him, but you’ll likely fail. You stand a better chance trekking to the castle gate and attempting to convince Radim the guard to allow you through, but even that won’t be a sure thing. How on earth are you going to leave the castle then?

Talmberger armor / escape from the castle

One way out is to impersonate a guard, by wearing guard gear. Just a few meters from the exit, you’ll find Votava sitting on a bench, who will sell you a lockpick if you’re not carrying one. Flog him any unnecessary items and don’t be afraid to haggle if you’re feeling brave. With the lockpick in hand, you can crack open a chest in the battlements’ attic room, where you’ll find a set of unused guard armour. With this, Radim will believe that you’re a guard and open the gate for you. Be sure to collect your horse before you leave (it’s the one that says ‘mount’ rather than ‘steal’ when you hover the cursor over it), as the journey home is a lengthy one.

If you’re in a hurry, however, or you simply can’t be bothered to find the guard armour, you could also try jumping from the drawbridge in the middle of the castle. The downsides of this approach should be obvious: you’ll probably injure yourself when landing on the rocks, and you’ll also need to hotfoot it home without the aid of a nag. A few guards will stop you just outside of Talmberg; you can either bribe, attack the men, or convince them to let you through. Make your way to Rovna to the west, where a cutscene will trigger, before you’re given the task of finding your parents. So starts the next main quest, Homecoming.