After you have buried your parents in Skalitz and been rescued by your allies, you wake up in a kind of fever dream. It’s not a pleasant one for Henry, who stumbles through this hellish vision, replaying the awful events that brought him here. Follow the target west/southwest until you stumble into three mercenaries. They’ll attack, but dissolve into the air after absorbing just a few hits, which is terribly nice of them. 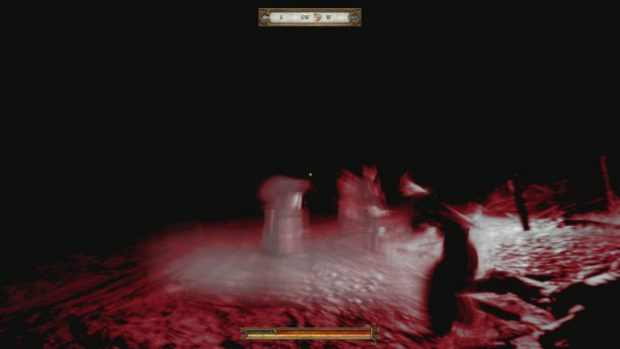 Follow the quest marker over the battlefield until you stumble into a cutscene showing various flashbacks of your recent past. A few moments later, Henry wakes from his dream, where he finds that Theresa, the miller’s daughter, has been tending to him for the past couple of weeks. It’s about time you got up out of that bed, and started exploring a new location: the town of Rattay.

Get your things out of the trunk

But before you head off into the big wide world, you might want to open the chest next to your bed and reclaim your possessions. Don’t forget to re-equip your weapons and armour, unless you’d prefer to walk around in your stained medieval pyjamas. Leave the mill and chat to Miller Peshek nearby – Theresa’s grumpy father who will offer you your first side quest: The Good Thief. 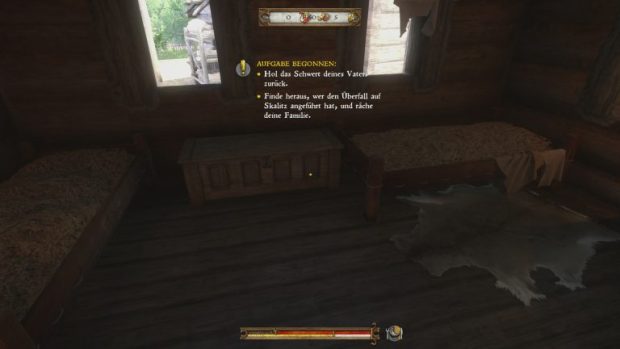 You’ll find that in the Side Quests section if you’d like to pursue it, but for now, let’s head to the castle for a long-overdue meeting with Lord Radzig.

Leave the property and head south/southeast, making for the hill and towards the castle. There are a couple of guards standing at the gate, but even if you mess up the skill-check where you insist to be let through, the pair will eventually recognise you as Lord Radzig’s blacksmith and let you pass. 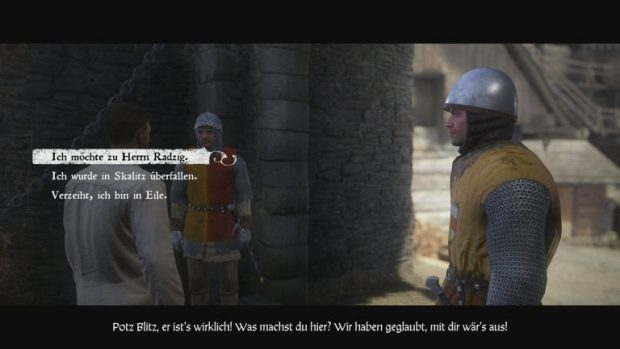 After entering, keep to the right and cross the wooden bridge, where another pair of guards stands in your way. Thankfully they, too, will let you pass without further ado, leaving you free to climb the outside staircase to the upper floor. Opening the door, you find that you’ve interrupted Lord Radzig’s feast, which was probably frowned upon in medieval times. How embarrassing, but not so awkward that it prevents Radzig from putting you to work in his garrison. Thus begins the next quest, Train Hard, Fight Easy.