The Khan Aimo is the final piece of Roccat’s smart RGB peripheral puzzle – or at least it is so far, anyway. Like their Horde Aimo keyboard and Kone Aimo mouse before it, the Khan Aimo uses Roccat’s intelligent RGB system to create a synchronised light show that adapts to the way you work and play, rippling and fading with every click, tap and pause across each of your devices.

Of course, unless you regularly have out-of-body-experiences when you’re playing games, the RGB effect on the headset will be pretty much lost on you, as there’s no way to actually see any of it once you’ve put it on. Not that it’s particularly overt in the first place, with only a thin strip down the side of each ear cup and a tiny little sliver at the base of headband, but at least your mates will think you’re “Très Cool” when you rock up with everything at your next LAN party. Okay, so the lighting might be a bit pointless, but to dismiss the Khan Aimo on those grounds alone would be short-sighted, as this is also another Hi Res audio certified headset just like the Steelseries Arctis Pro. It can also do Hi Res and surround sound at the same time – something the Arctis Pro is decidedly lacking.

Now, I’m as skeptical about Hi-Res audio as the next person, and try as I might through multiple demo sessions and enthusiastic marketing people telling me that, yes, I really can hear singers breathing and coughing when I couldn’t hear them spluttering and inhaling before, I personally can’t tell the slightest bit of difference between the two. 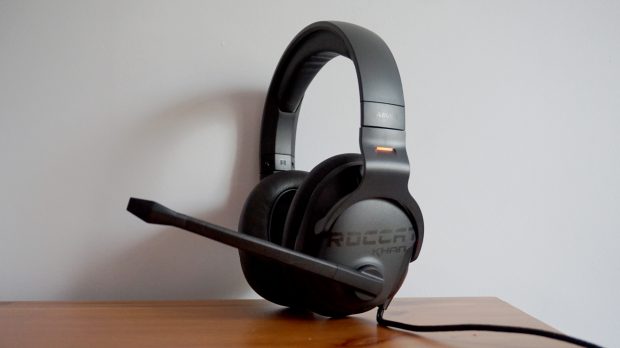 Theoretically, Hi-Res music should sound more detailed and more naturalistic than CD quality music, but you need a 24-bit 96KHz audio source to begin with, and I’m not exactly sure how many games actually support this when you get down it. Hi-Res is great if you have something like a Tidal subscription or own a lot of Hi-Res music tracks, but in games, I’m not convinced you’re actually getting much benefit.

That’s not to say the Khan Aimo doesn’t sound good, of course. Doom’s thumping bass, for instance, sounded lovely and weighty against the throaty cries of its resident demon folk, and the sensation of being surrounded by noise, whether it was the clunking machine of the UAC base or incoming plasma fire, felt wonderfully slick and precise. And yet squishing imp heads in via your gory finisher moves left me feeling a bit cold, as if the squelchy highs and dripping detail ended up becoming lost somewhat in the surrounding battlescape.

I had a similar niggling feeling when I booted up Hellblade, too. While the voices inside Senua’s head whisked themselves convincingly around my ears, their tone and timbre once again sounded slightly skewed toward the bassy end of the spectrum, making them sound a tad artificial and not quite real. 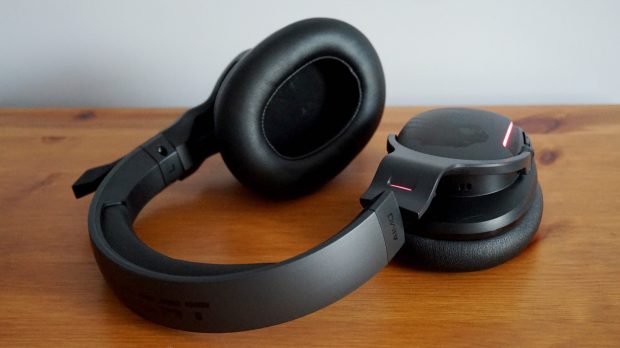 Then again, other games such as Final Fantasy XV sounded fantastic. Here, the game’s sweeping orchestral overworld themes sounded warmer and richer for having a bit more bass at their disposal, and higher, more delicate details like chocobo squeaks and the lads’ sword swings still came through loud and clear.

The Khan Aimo also excelled when I started listening to more regular music as well. Vocals in rock and indie tracks were warm and crisp, and I rarely felt like anything was being strained or overpowered by other parts of my test tracks. It even coped admirably with Turin Brakes’ Long Distance, which can often become a bit of a cludge if a headset’s been tuned with a particular bias in mind.

This makes the Khan Aimo a bit of a tricky one to pin down. In some ways, its sound was a bit disappointing, but in others it whopped the air-weaved cushioned behind of Steelseries’ Arctis Pro and then some. 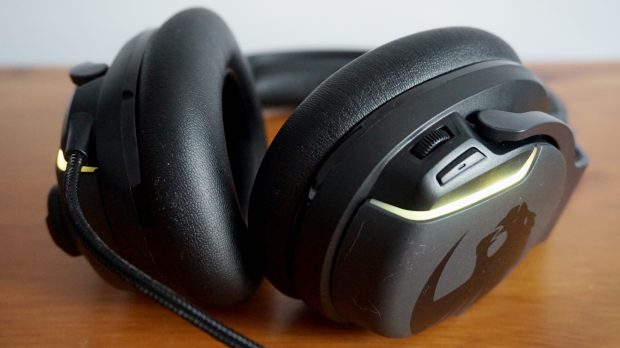 Sometimes, though, it’s the little things that end up dragging a headset down. For instance, the Khan Aimo’s volume slider on the right ear cup is a little small for my liking, and its memory foam ear cups started to make my ears itch after about an hour’s use. I also started to feel its headband pressing down on my head around this time, too – a problem I also had when I tested Roccat’s Khan Pro.

The Aimo’s fold-down, bendable microphone sounded very echoey as well when I recorded myself talking in Audacity, and its lack of LEDs meant there was no way of knowing whether I’d actually muted it using the button on the back or not.

I also like the convenience of the Arctis Pro’s dedicated DAC, as it made it much easier to fiddle around with its settings in-game. The Khan Aimo, on the other hand, has its 24-bit 96KHz DAC sound card built straight into the headset, which means you’ll have to put up with Roccat’s Swarm software if you want to adjust any of its settings. These are all fairly sensibly laid-out, giving you an equaliser, sample rate options, surround sound and microphone settings, and a number of different audio profiles to choose from, but it’s just a bit of a pain having to open up another piece of software all the time. 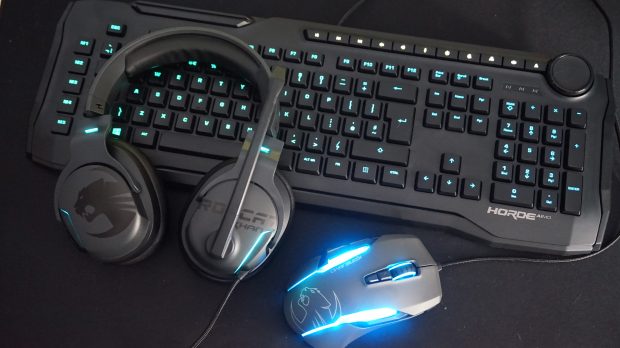 Then again, the Steelseries Arctis Pro is more than twice the price of the Khan Aimo, the latter costing just £105 / $120 as opposed to £249 / $249. That’s still a fair chunk to spend on a pair of headphones, of course, but it’s a lot less expensive than other non-Hi Res headsets like the Turtle Beach Elite Pro, and it’s only just over £30 / $20 more than Roccat’s own Hi-Res certified Khan Pro.

In the end, I think it will be a matter of personal preference whether you get along with the Roccat Khan Aimo or not. Personally, it’s not quite best gaming headset material in my books, but if you prefer your bass to be more prominent, then you’ll probably feel right at home. Those after a slightly cleaner, more balanced kind of tuning, however, are probably better off looking elsewhere – either to the slightly more expensive Steelseries Arctis 7 or HyperX Cloud Flight or the cheaper Corsair Void Pro.