The Asus ROG Strix Fusion 500 is probably the first headset I’ve used in quite some time where I haven’t had to automatically put the headband on the tightest possible setting. This surprised me, considering the enormous size of its ear cups, but the tight, rigid design of its headband meant there was no way I was getting this thing over my head without loosening it first. Finally, a USB headset for people with smaller noggins than I.

That said, I’m not sure how those with more petite brain centres will really get on with the Strix Fusion 500, as it still felt like quite the bike helmet even once I’d got it into a comfortable position. The lower portion of the ear cups felt particularly snug against my face, too, almost to the point where they were pinching my jaw a little. I was hoping that loosening the headset further might take the pressure off a bit, but this just meant it started pressing down on the top of my ears instead, making the headset feel even bigger.

Luckily, the Strix Fusion 500 comes with an alternate set of ear cups which have a material finish rather than faux leather, making its rather steep price of £160 / $180 feel a lot more palatable than its rivals. I actually found these material ear cups to be a lot more comfortable and less itchy than the default leather ones, but I wish they were easier to swap out. Each pair simply hooks over the driver’s surrounding plastic mold thanks to their inner elasticated bands, but that’s not very helpful when you can barely squeeze your fingers in to unhook them in the first place. I managed to get them on and off without incident, but there were times when I thought I might tear the thin elastic as I stretched them round the enclosure. 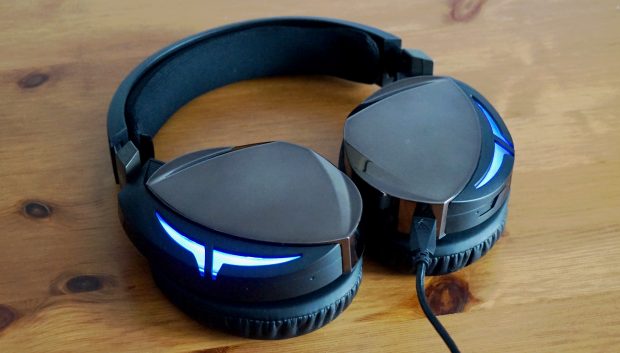 Since this is an RGB headset, the Strix Fusion 500 also supports Asus’ Aura Sync tech to let you have one continuous light show across all your compatible Asus devices, like your motherboard, graphics card, mouse and keyboard. Like all other RGB headsets, however, it’s all a bit pointless when you yourself can’t actually see said light show because you’ve got the damn thing clamped round your face instead in front of your eyeballs.

I’m also not convinced by the headset’s weird touch controls. Presumably in an effort to keep the bronze, mirrored surface on its ear cups as clean and, I suppose, classy as possible, Asus have decided to eschew traditional knob and slider controls for a touch plate on the left ear cup . Which makes no sense whatsoever if you’re making the argument for an elegant minimalist kind of design, as this just means you end up plastering it in greasy fingerprints.

In theory, touching the top will turn the volume up, touching the bottom will turn it down, tapping the middle will play and pause, and the sides will skip forward and back through your tracks. In practice, however, it’s an absolute mess, as instead of simply touching an area to produce the intended response, you’ve got to slide your finger out from the middle. It works, just about, but with no sense of tactile satisfaction. 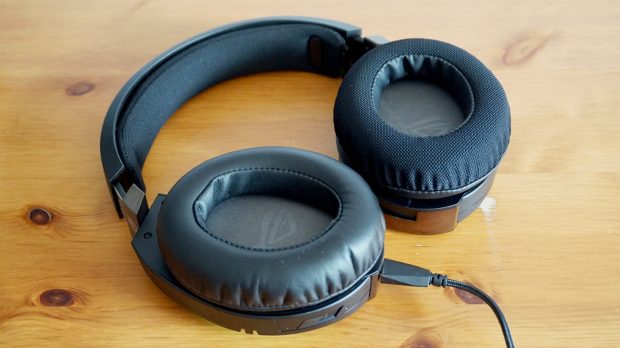 The volume, for instance, only goes up and down in tiny, four-step chunks on your master Windows volume, so you’ll need to put in several tiresome swipes before you get any meaningful change. Skipping a track also still requires you to tap play in the middle to actually listen to it. And that’s not taking into account the small, but noticeable delay there is between tapping the centre of the headset and it actually registering in iTunes, which always made me doubt whether I’d hit it correctly, turning any given attempt to play a simple track into a st.op.st-art.sl-i-de-sho-w.o-f.in-f-ur-iat-i-ng.ma-dnes-ss.

I also kept hitting the volume controls accidentally everytime I put the headset on and when I tried to release its teeny tiny microphone from its little cubbyhole between the left ear cup’s touch plate and ear cushion (shown below). Freed by pushing down on the little ledge at the front and secured by simply pushing it back into its nook, you get a little bit of up and down angle adjustment plus the ability to bend it in or out marginally, but it’s not the most flexible thing in the world and still produced quite a lot of background hiss when I recorded myself talking in Audacity. Not to the extent that I couldn’t hear what I was saying, but it was a persistent irritation to say the least. There’s also no mute button, which makes drinking tea and chatting over Skype simultaneously immensely difficult. 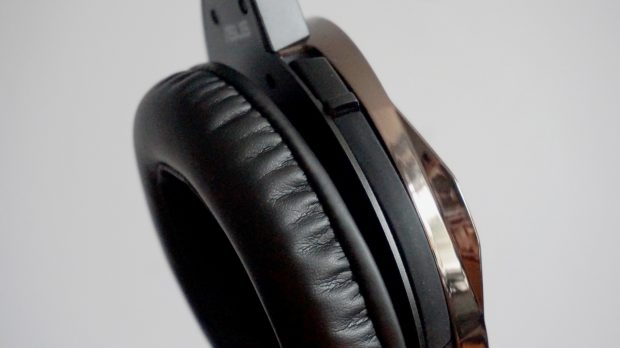 It’s a shame the Strix Fusion 500 is so fiddly to use on a day-to-day basis, as its built-in DAC (digital to analogue converter) and amplifier produce – for the most part – a highly pleasing sound. It leans quite heavily toward to the bassy end of the headset spectrum, but when listening to normal music I found it gave pop and rock songs a satisfying sense of weight to them, making them appear well-rounded and full-bodied. Vocals were clear at all times and taut drum beats sounded like they filled the entire soundscape rather than just landing with a dull thud.

That said, I was less impressed with how it handled busy orchestral tracks, as it was here that things started to get a bit muddy. In the multi-layered battle themes on my Final Fantasy XV soundtrack, for instance, there were multiple times when the violins on top sounded like they were struggling to be heard over the heavy bass underneath, and turning on its virtual 7.1 surround sound with its rear ear cup button only brought the bass to the fore even more, making things worse rather than better.

Fortunately, this problem more or less evaporated once I started playing games with it. The Strix Fusion 500’s bassy bias did wonders for Doom’s booming soundtrack, for instance, producing an all-encompassing wall of sound where shotgun blasts felt just as satisfying as splitting open hell knight skulls. 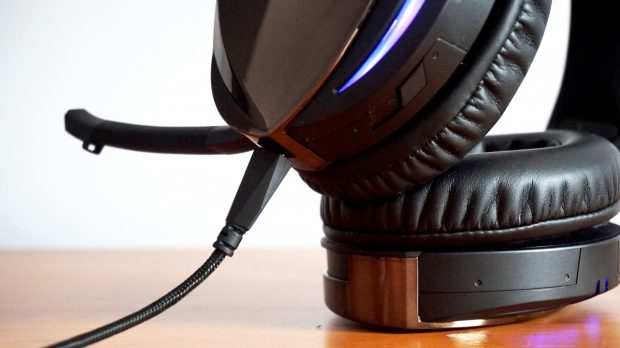 The 7.1 button is the only physical control on the entire headset

Hellblade, too, sounded equally menacing. As it turns out, I actually preferred playing with the Strix Fusion 500’s virtual 7.1 surround sound turned on here, as it gave the voices inside Senua’s head a lot more room to breathe. It didn’t destroy the sensation of the game’s 3D binaural audio, either, which other headsets have tended to do in the past.

Even Final Fantasy XV shone on the Strix Fusion 500, despite me having been previously a bit underwhelmed when listening to its standalone soundtrack. In-game, those very same battle tunes sounded much more balanced, the bass perfectly tempered against the strings, crunching sword swings and good boy Noctis and his mates shouting commands to each other during combat.

As great as the Asus ROG Strix Fusion 500 sounds, though, I think its volume controls and fussy microphone would just be too annoying to make it my headset of choice everyday. Its ear cups also take a lot of adjustment and fiddling to get them feeling comfortable, and even then I still found myself shifting it around on my head after a couple of hours use. If oversized headsets are your bag, you’d probably be better off with the Corsair Void Pro RGB. The Strix might have better virtual surround sound, but the Void Pro’s much comfier and a heck of a lot more convenient. Alternatively, check out our rundown of my favourite headphones for more audio delights for a wider variety of head shapes.