the Surface Book 2 is a solid gaming device when it’s using the GTX 1060, ably supported by a quad-core Intel Core-i7 8650U processor that can hit 4.2GHz (though, between actual need and moderate thermal throttling, tends to sit in the mid-3.0GHzs). The fan is a bit noisy when it’s in full flow – in contrast to the device’s almost eerie silence when it isn’t doing anything intensive – but it’s not too disruptive.

The GTX 1060 can’t realistically power the screen’s native almost 4K resolution of 3240×2160 at 60fps in recent high-end games, but dropping to 1080p or thereabouts is remarkably sharp, while 30fps at native is feasible in most stuff. However, for some reason some games’ settings won’t budge away from the native res, which can require some fiddling with ini files or desktop resolution.

Causing much gnashing of teeth in the tech-centric corners of the internet has been the discovery that the Surface Book 2’s maximum power draw in some circumstances exceeds that provided by its slimline charger. In other words, push the device to its limits and it’ll slowly discharge its battery even while it’s plugged into the wall. That, inevitably, mostly means gaming.

In practice, it’s very rarely been a problem. For starters, it can’t even happen unless you manually set it to Highest Performance mode via a slider in the system tray, though this is worth doing if you’re playing something glossy like Far Cry 5 at highest settings, as it noticeably ekes a few more frames per second out of the GPU.

Likewise, only a very few games cause the device to exceed the charger’s juice, and even then only in some scenes. There isn’t a definitive list yet, but both my and others’ experience has it that problem games are very much the exception rather than the rule. Finally, the battery drain is very slow – you’ll easily get four or five hours of game-bingeing in before the cells are anywhere near empty.

Long term, the real issue there is that a battery constantly flicking between charging and discharging may lose maximum capacity far faster than it should, which is very bad news in a sealed device that cannot be user-serviced in any way. This is my major element of buyer’s remorse, because I don’t want to find myself forking out hundreds more pounds to Microsoft in three years cos my fancy 2018 laptop can barely last a couple of hours any more. As I say though, in the vast majority of games, this simply hasn’t been an issue. I nevertheless feel that Microsoft owes Surface Book 2 buyers a fatter charger by way of apology/reassurance, but it’s extremely unlikely to happen – MS is bullishly claiming the problem is, effectively, all part of the design. 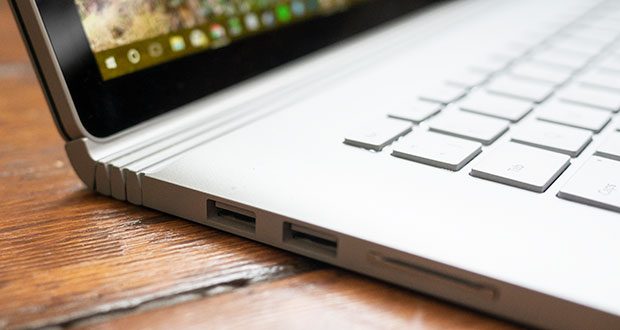 It’s not a slam-dunk for gaming then, but as a very good-looking, well-sized yet eminently portable workhorse that can also manage games ably, there’s little to compete – and nothing at all once you fold in the tablet witchcraft. It’s a lovely, hugely versatile thing that is big enough for gaming without being too big for anything else, and saves me from having multiple devices.

However, while I don’t regret the purchase, there are two other factors that make me sporadically wish I’d waited to see what the next generation could do. First of those is the lack of a Thunderbolt 3 support, meaning I’ve no hope of ever attaching an external graphics card. The CPU’s powerful enough that it could have feasibly replaced a desktop that way, and more importantly it could have remained gaming-capable for years to come. But nope, all we get is a standard-speed USB-C port (plus two normal-sized USB 3.0 ones).

Secondly, I’m a teeny-tiny bit disappointed by the screen. It does look lovely, with its sharp near-4K resolution and punchy colours, but it doesn’t go bright enough to compensate for how ridiculously reflective the glass touch panel over it is, so my hopes of occasionally working in the garden have been dashed. And the fact that it comes in a little lower than true 4K (3840×2160) may help with the impressive battery life – I get around 10 hours of general usage out of it – but it also means we’re denied 4K Netflix or Amazon Prime, which are very much things you’d want to do with such a fancy device. 1080p video looks good though – it’s more of a shame than an actual problem.

I’m also conscious that there’ll probably be more high-end laptops with HDR or even OLED screens like the Alienware 13 before long, so maybe I’m buying at the wrong time. But hell, the march of screen tech never stops – every time is a bad time to buy. 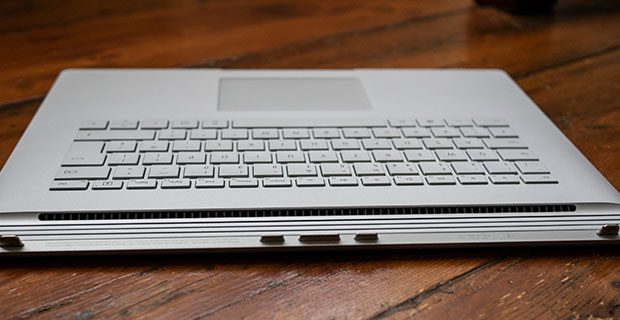 The final noxious strawberry creme in this particular tub of Quality Street is, of course, the price. The 15in Surface Book 2 is offensively expensive at £2349 for its starting 256GB capacity, the £2750 512GB spec is a sick joke and whoever decided that £3150 is a reasonable price for the 1TB model needs to be fired into the sun. SSD capacities are the only distinctions between those models – you get the same Core i7-8650U CPU, 16GB of DDR4 RAM and 6GB GTX 1060 in all of ’em.

Again, the lack of Thunderbolt 3 bites there, as you can’t hook up a super-fast external drive, though standard USB 3.0 speeds are adequate for most things. However, I was able to near-double my 256GB model’s capacity with a 200GB microSD card and a third-party adaptor which makes this sit flush to the edge of the laptop. Those cost £70 in total, which is a lot less than the £400 extra required for the 512GB model, though the SD card runs a lot slower – fine for general storage and smaller games, though.

If you’re in the UK and know anyone in higher education, you can bag 10% off from the Microsoft store just by clicking a button to say it’s for a student, which saved me £300. Between that, selling my old laptop and tech being tax-deductible for me, I’ll end up with the Surface Book 2 effectively costing less than half price – there’s no way I’d even have considered it otherwise. Same goes for the two-year warranty – the price and the inability to open it up and replace wheezing parts myself mean I couldn’t have settled for just one. 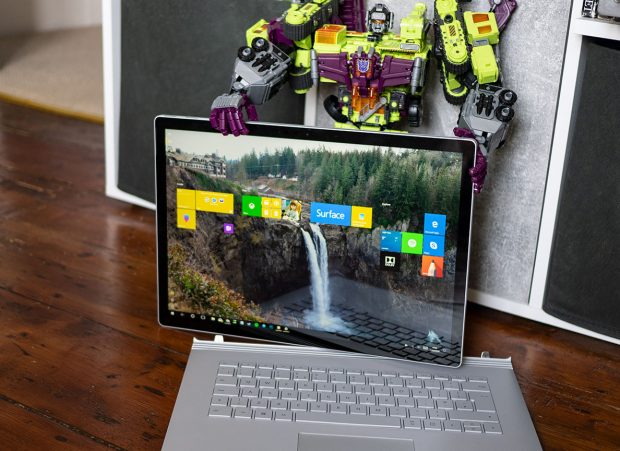 Clearly, as well as straight-up profit, Microsoft want to come across as premium as top-end Macbook Pros. This is a dramatically better-specced and more versatile device than anything Apple have to offer at present, but ‘Microsoft’ and ‘Windows’ imply something very different to many people than ‘Apple’ and ‘Mac’ do. Those stereotypes and loyalties have to be defeated before, rather than after, sky-high prices are matched.

This is a helluva machine, for both work and gaming, and I’m very glad to own one. However, I won’t feel so glad if and when Microsoft knock £500 off the price to make it more appealing to the Macbook-tempted, and to compensate for the absent Thunderbolt and power drain issue.