Congratulations, you’ve passed the halfway mark of our How to build a PC guide. The end is in sight, and it won’t be long now before you can sit back, have a nice hot cuppa and admire your handy work. But first, it’s time to install that graphics card.

Step 1: Remember those backplates you removed right at the beginning of our guide when we were sorting out how to install your power supply? Let’s hope they were the right ones! In all seriousness, though, it shouldn’t be too difficult to correct if you didn’t end up taking out the right ones earlier – just untwist the ones you do need to get rid of using a screwdriver (or your fingers if they’re held on with thumbscrews).

Make sure you keep those backplate screws nearby, though, as you’ll need them again in a minute to secure the graphics card in place.

Step 2: All graphics cards these days need to go in a PCIe x16 slot, which are those large, horizontal connectors on the lower half of your motherboard. Your motherboard may also have smaller PCIe x1 slots dotted in-between its PCIe x16 slots, which are generally reserved for expansion cards like network cards. Some may also end up getting covered up by your graphics card depending on how they’re laid out, so make sure you factor this in when installing any additional expansion cards, as you might not actually have as many available slots as you thought. 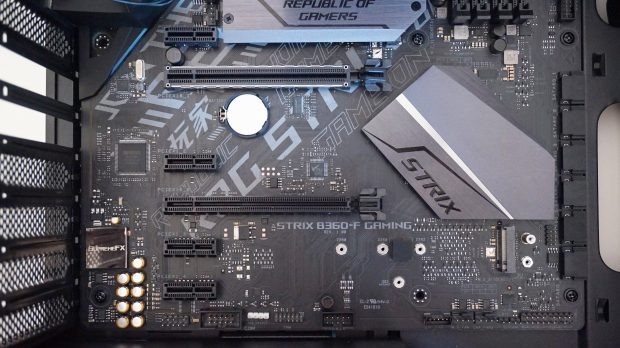 You’ll want to put your primary graphics card in the top PCIe x16 slot (the big long one).

Getting back to your graphics card, though, you’ll want to put this in your motherboard’s fastest PCIe x16 slot to get the best performance. This is usually the one at the top, closest to your CPU and input/output board, but you can always check your motherboard’s manual to make sure.

Some motherboards have a second PCIe x16 slot that can run at the full x16 speed – usually the more upmarket ones – but most of the time you’ll find any additional PCIe x16 slots you have only run at x8 speed, or even x4. Again, your motherboard manual will be able to tell you the running speed of each one, but I imagine most of us only have the budget for the one graphics card, rather than several.

It sounds obvious, but you’ll need your display outputs poking out the back in order to connect up your monitor.

Step 3: Once you’ve identified which slot it needs to go in (the top one), line up the connectors, make sure the display output side is facing toward the end of your case and the fans are facing downwards, and push it down into the PCIe x16 slot.

If you can’t push it all the way in, check that there isn’t a stray backplate getting in the way. Otherwise, it should click into place much the same way as your RAM, and sit straight along the PCIe slot. Although you might want to give it an extra shove, just to make sure. 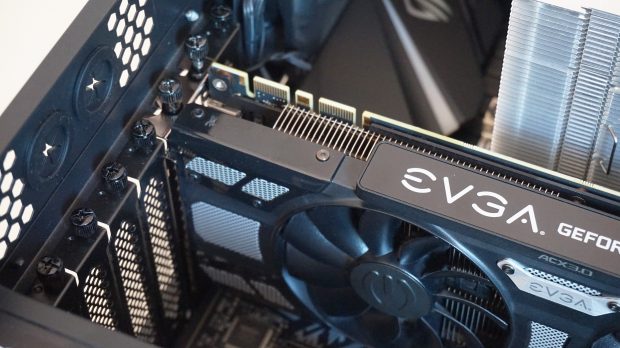 Use the thumbscrews you removed earlier to secure your graphics card back in place.

Step 4: Still got those backplate screws handy? Wherever you put them, dig them out again, as you’ll now need to use them to finish off securing the graphics card in place. Just put them back into the corresponding holes and twist. This will stop the graphics card from moving up and down when you come to connect your monitor cables, and generally keep it nice and steady inside your case.

Step 5: Now it’s time to connect it up to your power supply. Most graphics cards need at least one 6 or 8-pin connector, but beefier cards sometimes require two – it all depends on the make and model. Either way, though, you should have the corresponding cables in your power supply box if you went with a modular PSU, or they might even be sticking out of it already if you went for a non-modular one. 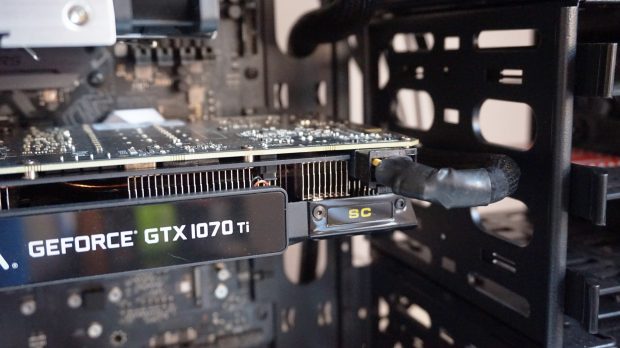 This EVGA GTX 1070Ti only requires one 8-pin connector, but some graphics cards need two.

You’ll probably want to thread the connector through to the back of your case for this if you’ve got the space, routing it back round the main side using the appropriate hole down the side of your motherboard that’s closest to your graphics card’s power connector. This helps keep things nice and tidy and improves airflow inside your case, but you can always just plug it straight in if you prefer.

Either way, these connectors are very similar to the main power cables on your motherboard – just push down and they should click into place by themselves. And you’re done!

Next up: How to install your SSD / HDD. We’re so nearly there!