Out of all the gaming laptops I’ve tested so far, there have been very few that have justified their often extortionate prices. In fact, the only one I’d consider buying myself right now is Dell’s Alienware 13 – and even that’s not completely free of flaws. But after seeing the new HP Omen 15 laptop in the flesh, it looks like we might finally have a contender for best gaming laptop of the year – nay, of ALL TIME. It’s small, dinky and has some seriously beefy innards, but the best thing about it is that you might never need to buy another one ever again thanks to HP’s intriguing new Game Stream feature. Let’s take a look.

Compared to last year’s Omen 15, this new model has a much, much smaller footprint, making it more portable and easier to lug round in a back pack. It’s not quite Razer Blade levels of svelte slimness, but it’s immediately more appealing (not to mention significantly lighter) than Dell’s Inspiron G5 15, for example. HP’s new ‘micro-edge’ bezels also mean you don’t have such chunky swathes of plastic surrounding its 15.6in 1920×1080 display, either, making the whole screen feel bigger and more upmarket.

Speaking of that display, all but one of the four 2018 models now comes with a rather lovely 144Hz refresh rate, while the top Nvidia GeForce GTX 1070 configuration also has Nvidia G-Sync support for smooth, tear and stutter-free gaming. The latter naturally adds quite a large chunk of extra change onto the Omen 15’s overall price (£1599 compared to the non-G-Sync £929, £999 and £1249 specifications – US pricing to be confirmed), but provided the quality of its IPS screen is up to snuff, it could well be worth it if you fancy the idea of super smooth 144fps gaming on the go. 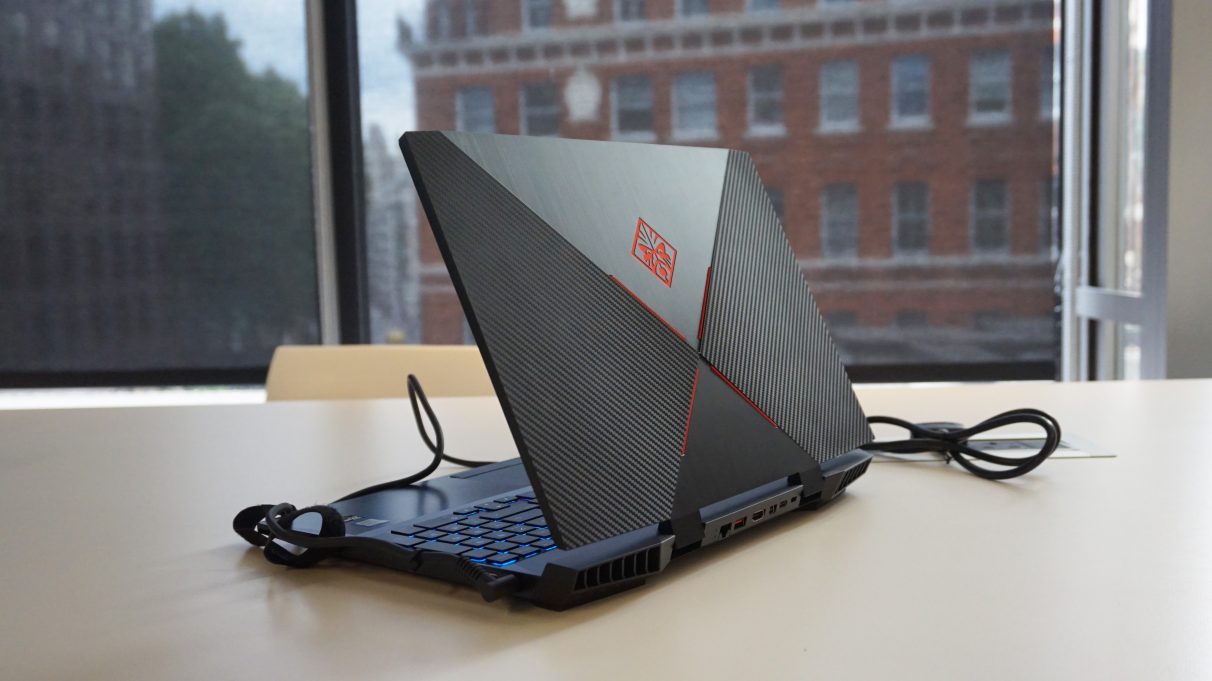 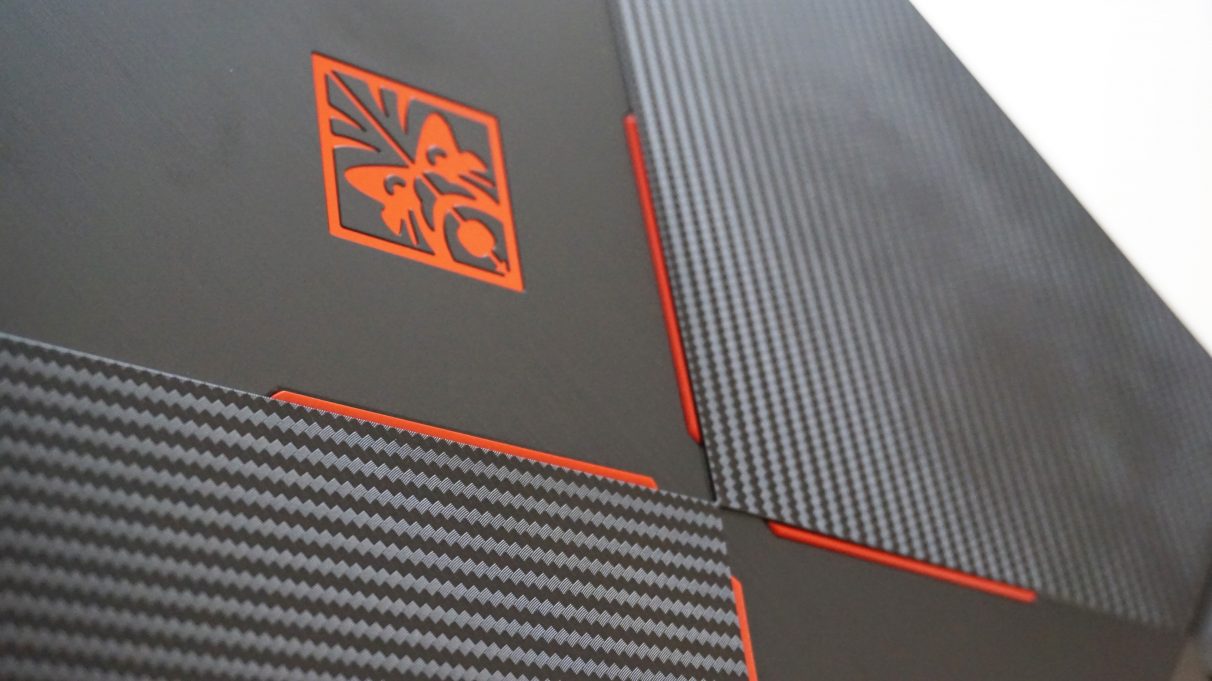 The Omen 15’s real party trick, however, is that tantalising Game Stream feature. Activated through its Omen Command Centre software, this essentially lets you stream games from your desktop PC at home to your new Omen 15 wherever you happen to be. None of this ‘you must be on the same Wi-Fi network’ nonsense. As long as you’re connected to the internet (and your PC at home is turned on), you can stream whatever game you want from your home library – handy, say, if you’re short on storage space or want to play something the base model’s Nvidia GeForce GTX 1050 or 1050Ti chips aren’t quite capable of handling at full speed using the best graphics settings.

That’s quite a game-changing piece of technology when you think about it, as it not only gives the Omen 15 a new degree of future-proofing that no other gaming laptop can offer right now, but it also means you no longer have to opt for the most powerful graphics specification to technically get the best quality gameplay, allowing you to save yourself a bit of money in the process.

Of course, a large part of Game Stream’s appeal will depend on what kind of graphics card your PC has already. It probably won’t be much use if, say, you don’t already have an Nvidia GTX 10-series card that’s more powerful than the Omen 15 model you’re thinking of buying, for instance. But think of it like this: instead of buying a whole new laptop when the Omen 15 starts to feel a bit creaky (or, indeed, think about investing in an external GPU that will essentially tie you to your desk at all times), you could just upgrade the graphics card in your PC and reap the benefit across two machines instead of one. 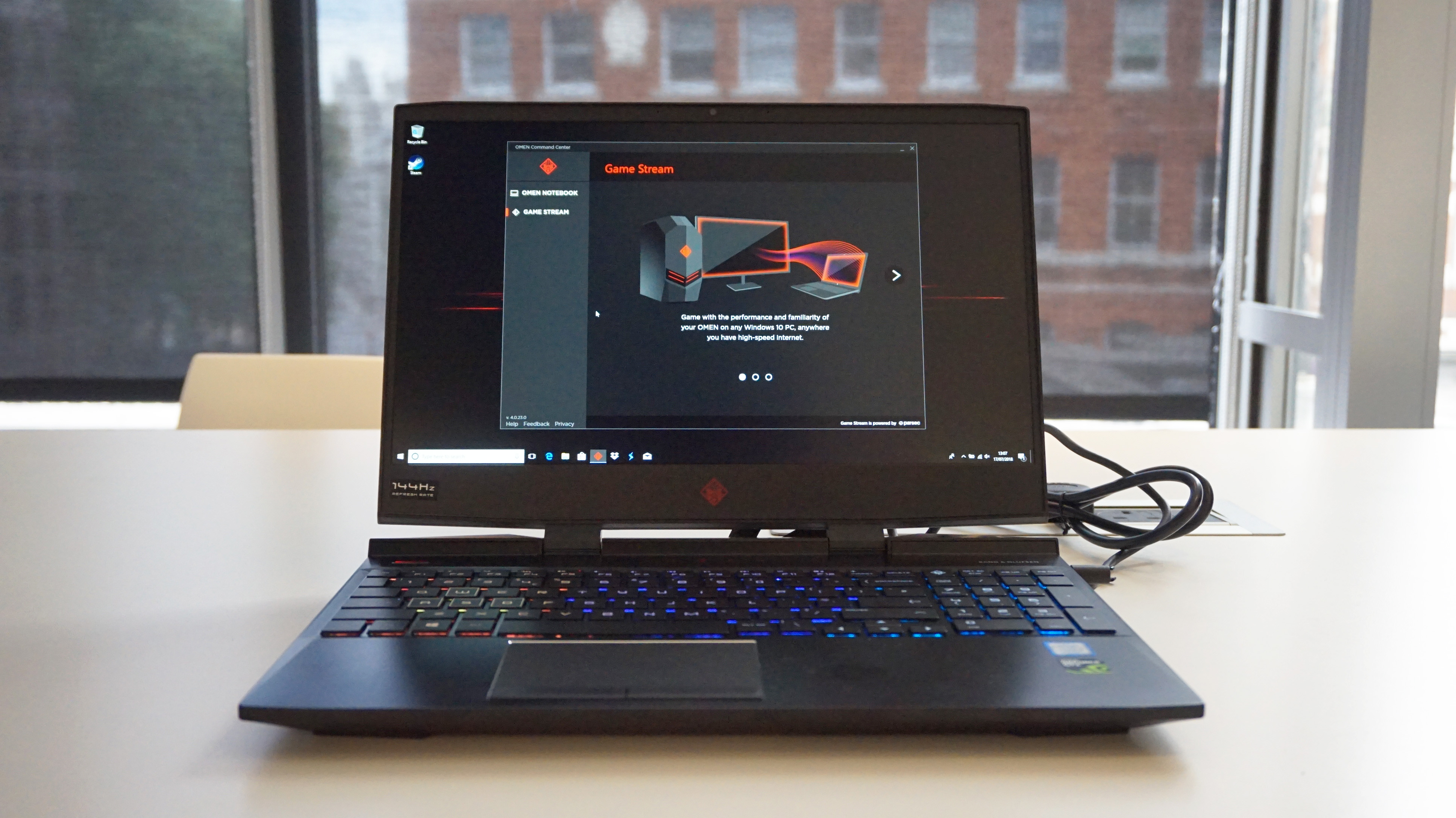 Now, I realise the phrase ‘cloud gaming’ may still make some of you break out in a cold sweat after its rather rocky attempts at becoming a mainstream gaming service over the years, but based on other PC services I’ve seen and tested over the last year or so, such as Nvidia GeForce Now and Blade’s tiny Shadow cloud PC box, I can safely say that things are definitely starting to get a lot better on this front.

Indeed, HP’s Game Stream service is built on the same tech used by cloud gaming company Parsec, who boast ultra low latency times and compatibility with Nvidia and AMD graphics cards alike. Unfortunately, HP’s demo session wasn’t set up to show Game Stream off in person, but rest assured that this is definitely something I’ll be putting to the test once review samples of the Omen 15 arrive in the next week or so.

Another piece of good news is that Game Stream will be coming to all HP Omen laptops as a free update soon if it hasn’t done so already, so you don’t even necessarily have to stump up the cash for a new Omen 15 in order to take advantage of it. If you’ve already splashed out on HP Omen X 17, for example, then you’ll be getting Game Stream on that, too. 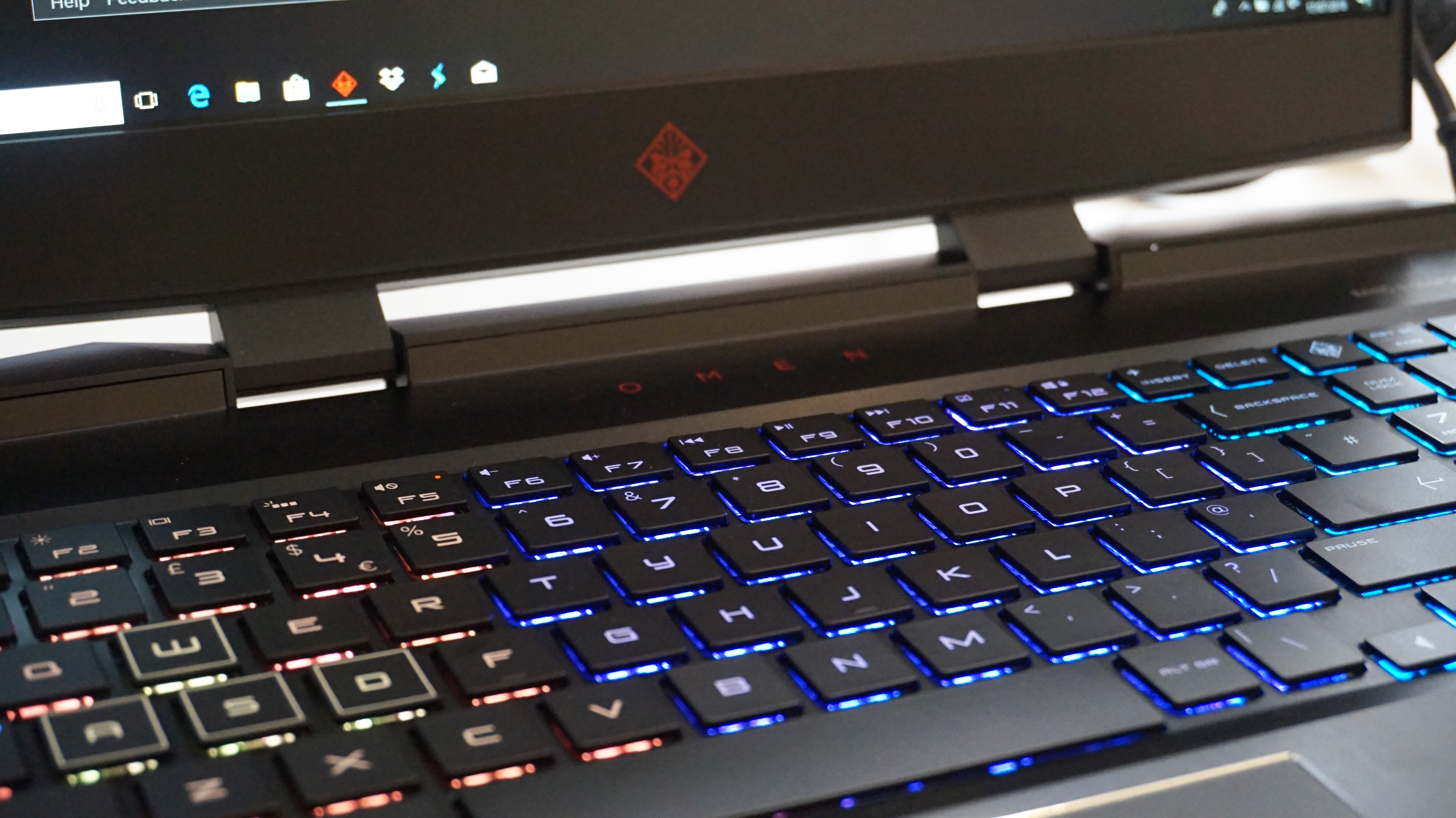 Another new feature on the Omen 15 is its RGB keyboard. Now before you start groaning about more needless RGB gubbins, you’ll be pleased to hear it’s not hugely noticeable at first glance. You can just about see it if you squint hard enough from the right angle, but it’s definitely not going to distract you from playing games.

All of the new Omen 15 models come with one of Intel’s 8th Gen Coffee Lake CPUs as well, starting at the quad-core Intel Core i5-8300H and going all the way up to the six-core Intel Core i7-8750H. There will even be a Core i7+ 8750H Intel Optane Memory configuration as well, just in case the rest of its various NVMe SSD and traditional HDD storage options aren’t quick enough for you. Just bear in mind that this particular model – the £1249 one – doesn’t come with the 144Hz refresh rate display.

Sensibly, most of the HP Omen 15’s ports have also been relocated to the back of the chassis, helping to keep your cables nice and tidy on your desk if you end up connecting it to an external display or Ethernet cable. You’ll still find two USB3 ports on the side, as well as separate headphone and microphone jacks, but the rest are all squeezed in between its rear vents. These include a full-sized HDMI port, mini DisplayPort, a third USB3 port and a USB Type-C port, plus your Gigabit Ethernet.

All in all, I’m very much looking forward to putting the Omen 15 through its paces when it eventually rocks up in the next couple of weeks. Let’s just hope its screen isn’t as diabolical as almost every other gaming laptop I’ve tested recently, and that its tempting Game Stream tech is as good as it sounds.