I have never seen Twin Peaks. That’s alright, though, because a lot of people I know really like it. I’ve been around them going on about cherry pie and the red room for long enough that when I am told “And of course there’s some inspiration from Twin Peaks, too!” I know to read it as “This is going to be weird; will probably feature coffee.” Sure enough, the little bit of Trüberbrook I played demonstrated weirdness (coffee as yet unconfirmed but I suspect probable).

Trüberbrook piqued my interest a while ago, not because of the touted Twin Peaksiness, but because it has physical sets. I can’t not love handmade miniatures (so I was also very pleased by, for example, Lumino City, and am keeping a close eye on Harold Halibut as well). It’s also a point and click mystery adventure, which is a handy intersection of interests for me. They say the devil is in the details, and Trüberbrook does have a lot of details to like. The main character, Hans, is an American student on a trip to the titular, and very isolated, German town. His straightforward confidence with a hint of “Golly! Gee whizz!” in the delivery did make me think of perennial favourite Guybrush Threepwood. The developers are German themselves, so the English script has some of the beautiful phrasing you only get from speaking it as a second language (the most accurate description of a breakup I’ve ever heard remains my Russian pen pal characterising his as “a sad tale full of tears and snot”). At one point every character on screen paused and looked directly at me, which I thoroughly enjoyed. The late 60s setting means there’s at least one cool retrofuturist bunker, with an AI that looks like an old TV on a ceiling rail. When it’s thinking about something it displays a little sand timer on screen, which made me giggle every time it happened.

And, of course, the sets do look lovely, with fuzzy grass and cobbled streets and the soft felty carpets. Developers Btf use real lighting and physical changes for the seasons, and the sets are digitised using a process called photogrammetry. The result so far is that the town is an enchantingly eerie dolls house, and is particularly nice to look at when there are moving parts. The aforementioned bunker has a little spinning solar system, a model within a model. If anything it really needs more movement to highlight the physicality. (The characters, by contrast, are all digital, and at this stage do have a bit of the look of someone using a green screen circa 1995.) That these sets are real is a big selling point, but if that’s not actually taken advantage of in the game then why bother going to the effort? 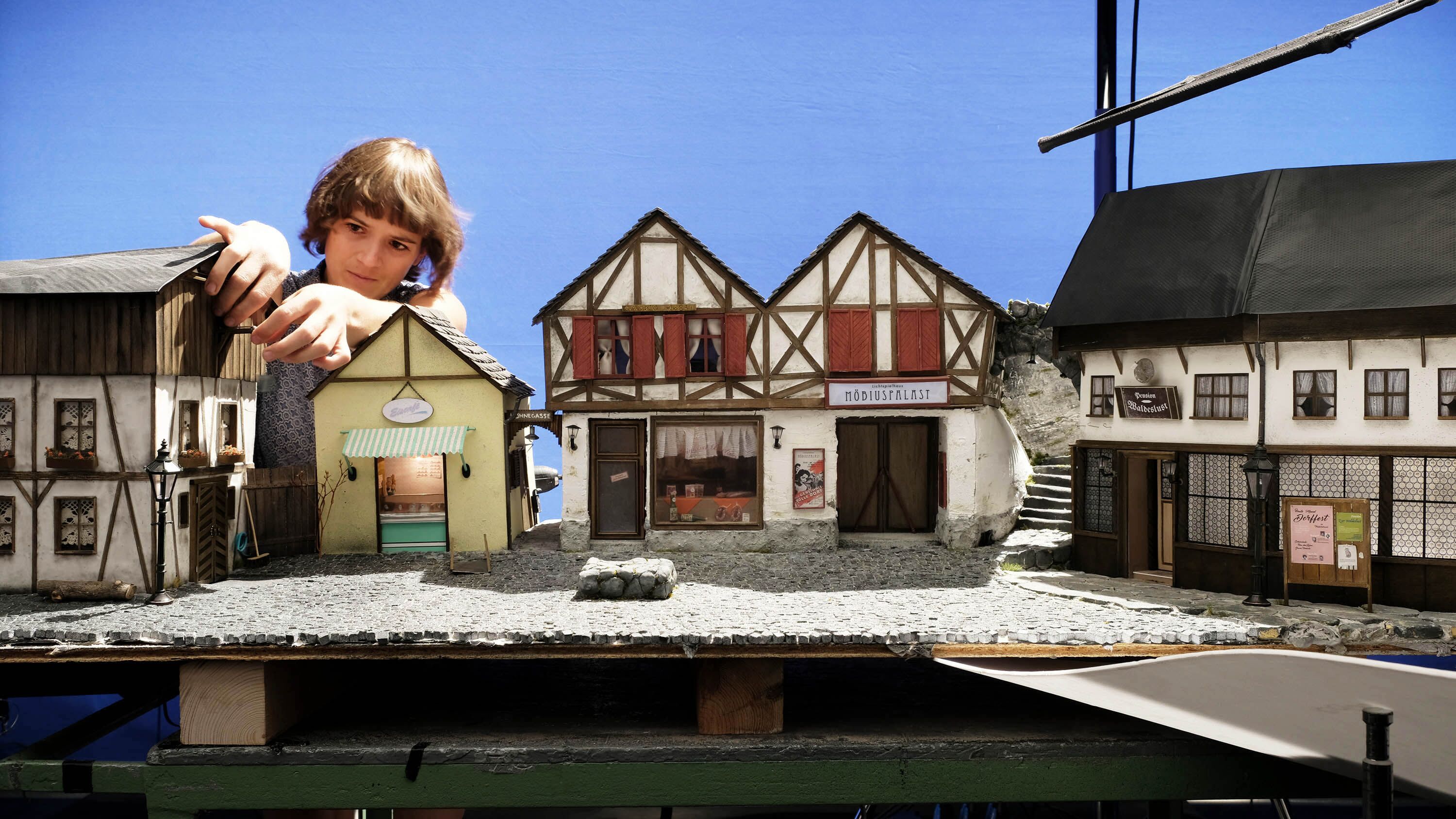 The broadest problem comes in the form of the controls. Point and click games move slowly. The puzzles can require experimentation and methodical repetition. Making mistakes and not knowing exactly what the right solution is decreases the speed further (doubly so, because your character will usually have the same top speed as an arthritic snail). You need the game to mitigate that as much as possible. But playing Trüberbrook with a gamepad does not do this. It’s like playing with a shoe.

Rather than a reticule that moves freely, your pointer is pinned to Hans and swings around him as you direct his attention. Often to select something, you must first trundle Hans close enough to it with one thumbstick, and use the other to push the cursor in the right sort of direction. Then, assuming you’ve highlighted the right thing (which you might not have), you have to select the action you want from the d-pad without letting go of the thumbstick. It’s as fiddly and imprecise to use as it is to explain, especially when the game asks you to select some very specific areas or items. It breeds frustration because it stops you coming by your fuck ups honestly. I suppose it could be some kind of deliberately Lynchian take on the whole concept of control. That wouldn’t make the system any better. But who knows? When using keyboard and mouse it might all be wonderful and intuitive. The puzzles themselves do at least make sense – or at least the very few I engaged with did. There doesn’t seem to be any “use teddy bear on t-rex”-levels of nonsense, and things like figuring out how to make friends with the clunky ’60s AI are weird and fun. It is, though, annoying that the game doesn’t let you get ahead of it. The AI broke and I realised I needed to fix it, but the game wouldn’t let me do that until I’d spoken to the AI and it asked me too. Letting me skip that step would have been a nice little ego-stroking reward: oh the cleverness of me!

Not that I didn’t enjoy visiting Trüberbrook. I liked it enough that the short demo I played really did feel short. In the space of about half an hour I saw a suspicious midnight theft and glowing footprints, a suspicious lake, references to suspicious scientists with frankly suspicious names, and discovered that even Hans’s presence in the village was very obviously suspicious. I’m still interested to explore all these weird things. But Christ, I’m not doing it with a controller.

Trüberbrook is coming to Windows, Mac and Linux via Steam… at some point. Possibly this year. The devs are also planning to distribute a DRM free version.