The MSI Trident 3 8th is probably the most console-like mini PC I’ve ever laid eyes on. Measuring 346x323x72mm, it’s roughly the same size as an original Xbox One, and can be laid down on its side if you don’t fancy standing it vertically with its accompanying base. That’s pretty handy if you’re after a PC that can sit neatly inside a TV stand, although its sharp ‘gamer’ angles and slash of RGB lighting round the corner by the power button will probably make the rest of your household cringe a bit whenever they clap eyes on it.

Still, with one of Intel’s 8th Gen Coffee Lake CPUs (hence the titular 8th) packed inside – the 3.2GHz Intel Core i7-8700, to be precise – as well as 16GB of RAM and a 6GB Nvidia GeForce GTX 1060 graphics card, it’s a little easier to forgive its shouty design. Is the Trident 3 a better use of your money than the Zotac ZBox Magnus? Let’s find out.

I must admit, UK Trident hunters get a pretty bum deal in this respect. While there are plenty of other configurations out there that feature older (and therefore cheaper) 7th Gen Intel processors, this particular version will set you back £1400. That’s probably only a little more than you’d normally expect to pay for a full-sized PC of this kind of calibre, but when those in the US can get exactly the same spec for $1276 (with a mouse and keyboard thrown in as well, no less), the UK version looks downright extortionate by comparison – especially when it’s not really geared up for upgrading with better parts further down the line like the (at time of writing) £925 GTX 1070-powered ZBox Magnus.

From the outset, then, the Trident 3 is rather on the back foot a bit, especially if you happen to live in the UK. Thankfully, its US configuration presents a much more tempting prospect for would-be mini PC owners, for not only does the equivalent GTX 1060 ZBox Magnus cost more than this particular Trident 3, but it also only comes with a lesser Core i5-7500T processor. 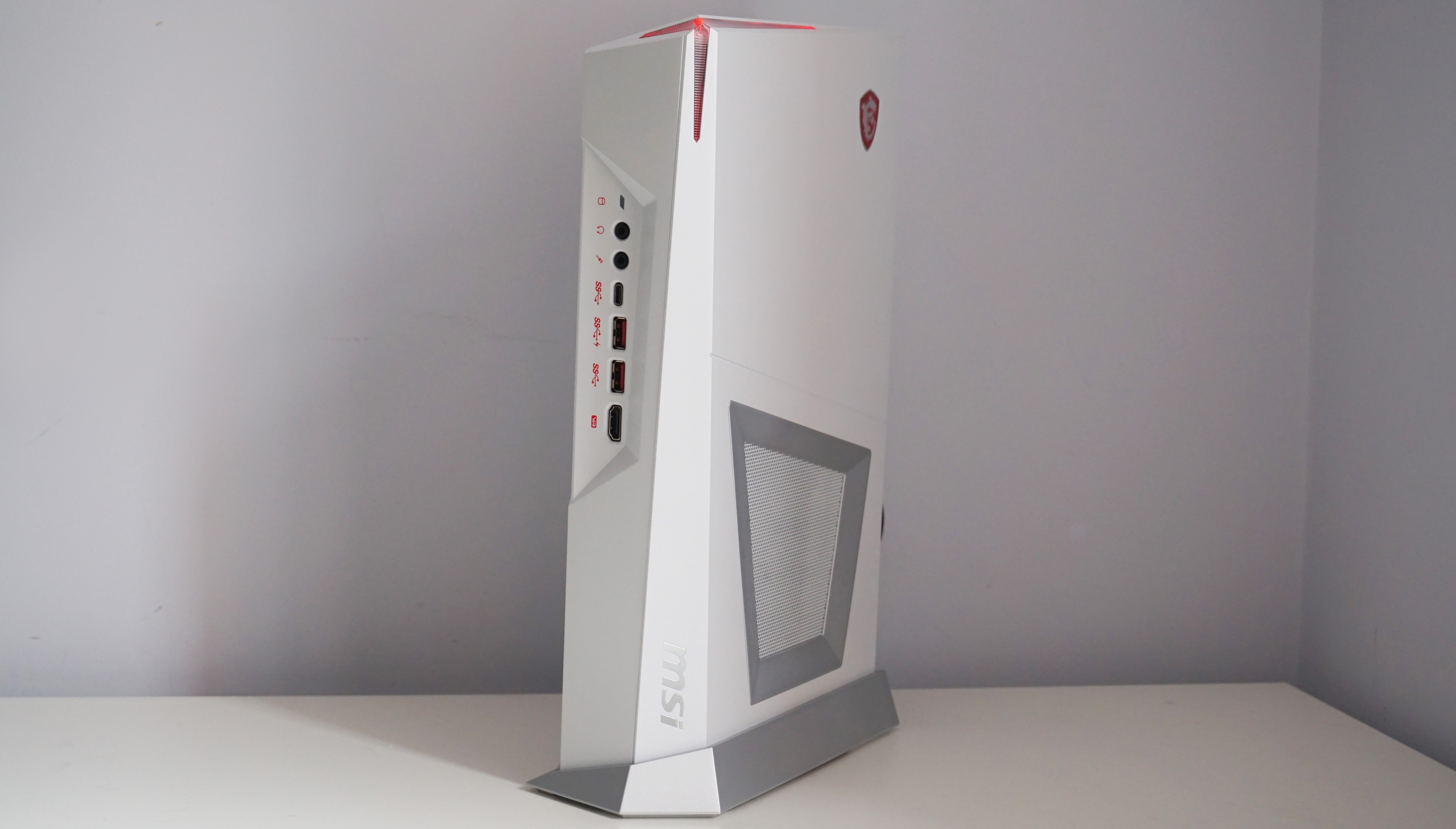 The Trident 3 comes with lots of handy ports on the front, including two USB3, one USB-C, separate headphone and microphone jacks, and even an HDMI output for VR headsets

Indeed, paired with a Core i7-8700, the Trident 3’s 6GB GTX 1060 performed admirably in my benchmarking tests, comfortably hitting 60fps on most games at 1920×1080 on their highest settings, and only requiring a couple of alterations when I raised the resolution to 2560×1440.

As ever, Doom and Wolfenstein II: The New Colossus were the slickest games on show, settling in around an easy 120fps on their respective Ultra and Mein Leben settings at 1080p, and a very smooth 65-80fps at 1440p. Hitman didn’t need any adjustments when I changed resolution either, with Agent 47 slipping through the crowds at a comfortable 75fps average on Ultra at 1080p, and a still highly playable average of 53fps with the same settings at 1440p.

The Trident 3 had a pretty good go at tackling Rise of the Tomb Raider‘s demanding anti-aliasing options, too. Normally, I have to drop it down to the lowest FXAA setting to get anywhere near 60fps on Very High at 1080p, but the Trident managed an impressive 66fps average on the next AA setting up, SMAA. Sadly, Very High proved a little too much for the Trident 3 at 1440p, even with FXAA enabled, but a combination of High and SMAA saw Lara clamber around the game’s densely packed environments at a smooth 51fps.

Elsewhere, however, you’re probably going to have to settle for Medium settings at 1440p if maintaining a flawless 60fps is particularly important to you. I was still able to get at least 40fps on max settings at this resolution with the rest of my testing suite, but Medium definitely proved to be the most comfortable setting for getting that elusive 60fps. 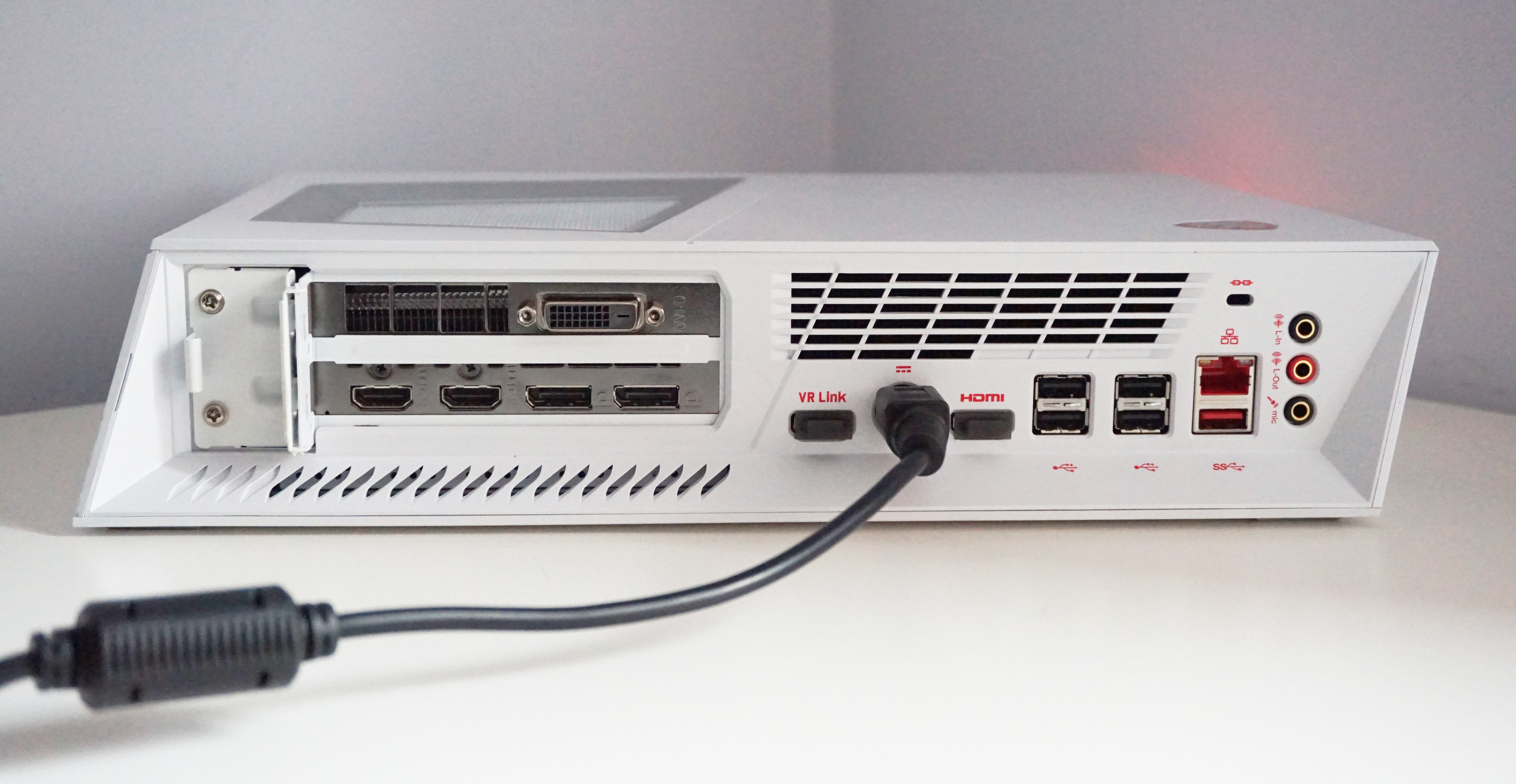 As well as the display outputs on the graphics card, you also get another two VR-orientated HDMI outputs, four USB2 ports, one USB3, Ethernet and three more audio jacks.

In Middle-earth: Shadow of War, for instance, the Trident 3 produced a silky smooth average of 58fps during the game’s internal benchmark on Ultra at 1080p, but could only manage 39fps when I tried the same setting again at 1440p. That’s still pretty decent for such a small machine, but even High only saw an improvement of around an extra ten frames or so. On Medium, however, the frame rate shot up to very pleasant 66fps.

The same goes for The Witcher III. Here, the camera was too jerky on anything above Medium at 1440p, which saw Geralt slicing and dicing drowners at a rough average of 50-60fps. Even Ultra at 1080p proved a bit choppy for the Trident 3, all told, as here the frame rate settled between 45-50fps. Instead, I found High to be the smoothest at this resolution, where it maintained a steady 60fps throughout.

The ever-taxing Assassin’s Creed Origins was also its most agreeable on Medium at 1440p, producing a stable average of 55fps in its internal benchmark. That said, if you don’t mind something closer to 50fps, High will do you just fine at this resolution, as I only saw a drop of 6fps when I ran the benchmark a second time. For those playing at 1080p, Very High is the quickest route to 60fps, but again, you could probably manage on Ultra if you don’t mind losing a couple of frames overall.

Total War: Warhammer II required a fair bit of tweaking to get the best frame rates as well, but nothing too drastic. At 1080p, Ultra saw a very playable average of 47fps in battles and 53fps over on the campaign map, but kicking it down to High pushed both those figures well beyond the 60fps mark, keeping things nice and smooth even when the camera was pushed right up against the scaly nostrils of a snarling Lizardman. High continued to produce steady results at 1440p as well – around 43fps in battles and 53fps on the map – but Medium once again provided the smoothest experience, with an average of 55fps in battle and 63fps when soaring round the map. 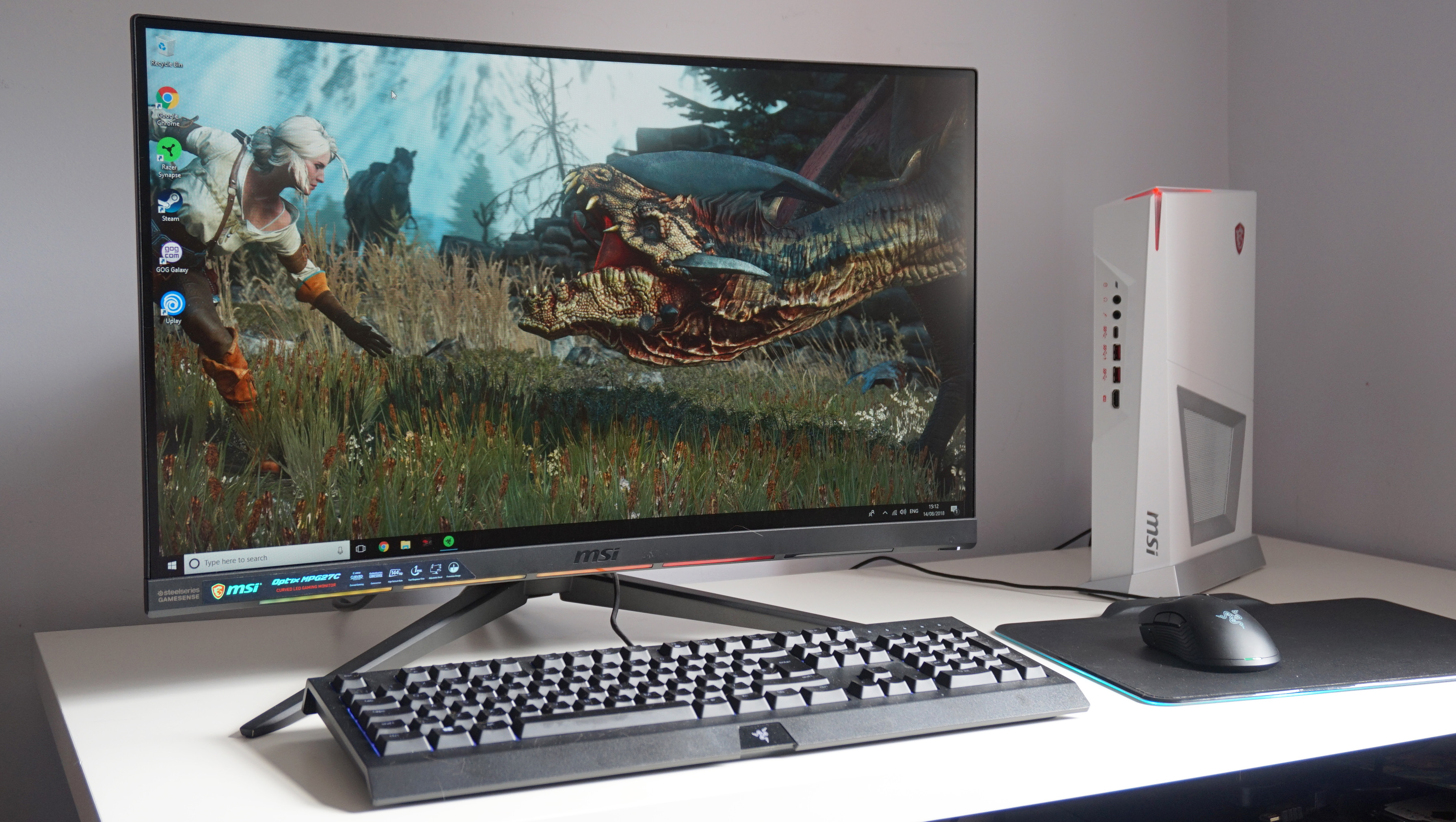 The only game the Trident 3 really struggled with at 1440p was Final Fantasy XV. It coped brilliantly with the resolution set to 1080p, producing a smooth 55-60fps on Highest with all of Nvidia’s fancy effects turned off and between 45-50fps with TurfEffects and HairWorks enabled, but even turning things down to Average at 1440p only garnered an average of 45-50fps with everything turned off and between 40-45fps when I switched on TurfEffects and HairWorks. That’s still more than fast enough for comfortable play, of course, but 60fps purists may want to consider opting for a beefier graphics card specification if those sorts of speeds aren’t good enough for you.

Still, on the whole, the Trident 3 is a very capable gaming machine, and compared to other small GTX 1060 builds I’ve tested such as the Zotac MEK1, it’s also one of the fastest, pulling ahead of the MEK1 by around 5fps in almost every game on test, regardless of graphics settings and resolution.

That’s probably down, in part, to the Trident 3’s superior 3.2GHz Intel Core i7-8700 processor. One of the most powerful CPUs available today, the Core i7-8700 tore through my Cinebench R15 and Geekbench 4 benchmarks, surpassing the AMD Ryzen 7 2700X‘s single core performance by 5% in the former and 13% in the latter. It didn’t do so well on multicore performance, all told, coming in 27% slower than the Ryzen 7 2700X in Cinebench and 15% slower in Geekbench, but this has always been an area where Intel has struggled compared to their AMD counterparts.

I should also note, though, that as powerful as the Core i7-8700 sounds on paper, it actually produced nigh-on identical results in both tests to the Core i5-8600K I have inside my own full-sized PC. This is likely due to the Trident 3’s considerably tighter cooling constraints – I’ve got a giant be quiet! BK009 Pure Rock cooler stuck on my CPU – but it’s worth pointing out that you’re probably not getting the full whack of what the Core i7-8700 would otherwise be capable of in a larger, airier case. 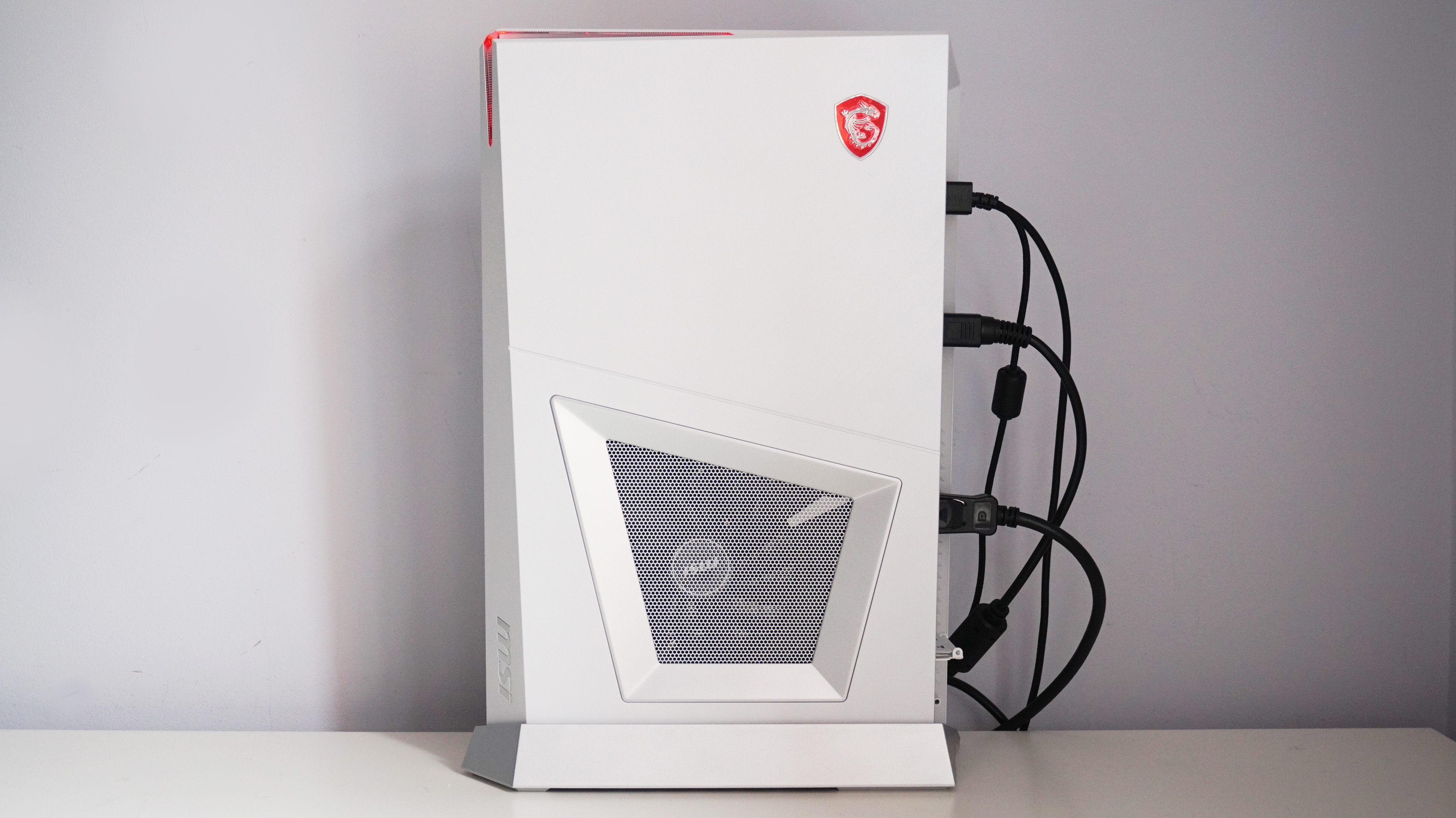 Of course, you’ll likely find similar bottlenecks with every type of processor you bung inside a tiny PC like this, so any potential performance hitches are all relative to the size of the thing you’re actually buying. After all, it’s gaming performance that really matters here, and as I mentioned above, the Trident 3 is almost certainly one of the more capable GTX 1060 machines I’ve tested so far.

Its larger size also does one important thing the smaller ZBox Magnus doesn’t, and that’s provide enough room for both a nice, nippy SSD and a high-capacity HDD.

It’s just a shame about the price. In the UK, you’re almost certainly better off getting the Zbox Magnus ER51070 if you’re after a small mini PC, as it both takes up less room and packs a greater graphical punch for less money. In the US, though, it’s probably one of the better value GTX 1060 mini PCs around, particularly if you go for the mouse and keyboard bundle as well. If you and the rest of your household can stomach its chiseled slab-like design, it won’t disappoint.