Forgive me, readers, for I have let us all down. This week I had someone over to sign a legal document as a witness, and we watched Fury Road, and I didn’t say “Witness me!”. There’s nothing I can do to redeem myself, but before you destroy me with sticks, why not enjoy another round up of the best new, obscure games on Steam with Unknown Pleasures?

An instantly loveable adventure game about Penny, a … lord, what would you even call her? A grown up version of Louise from Bob’s Burgers? She’s mean, self-centred, bizarre, weirdly heroic in her own cynical way, and bloody funny. She’s fired from her job for being too, um, enthusiastic, and immediately goes off with her boyfriend (who she addresses as “Boyfriend”) on a little drive across the game’s absolutely wonderful parallax world. But then dies. And is mistaken for a demon because she’s still wearing her obviously-a-halloween-costume demon ears, so gets roped into filling in for Death while he’s on holiday.

This is another one I don’t want to spoil, because it’s all so wonderfully silly, clever, and funny, without ever being too up itself, because its goal is to always make you laugh. You go about the platform-y world talking to NPCs and chasing down resources that allow you to posses the living. Doing this lets you read their thoughts and control them in order to solve puzzles, but also just to see what new animations and dialogue you can bring out. I’m gonna say “Psychonauts” because it would be dishonest not to.

I loved the artwork, but when I first possessed a human and the entire world physically flipped around 180 degrees to show me the “back” of it – the living world – I felt like standing to applaud.

Beat ’em ups are still fairly scarce on the PC, and good indie ones are almost unheard of. Shaolin vs Wutang is an original one that eschews the usual roster of manatee-generated characters and instead simply represents as many schools of martial arts as it can with an anonymous representative. It’s as though the arts themselves must be proven, rather than pitting a pizza chef who loves savate against a boxer who was raised by rebellious cows.

That could have been rather dry and dull, but when you get into a fight you’ll probably soon find yourself characterising everyone anyway. Not least as the sets, music, and whole style in general makes it clear this is a love letter to old 70s martial arts films and it goes a long way. When I played as Tang Soo Do, a Korean style inexplicably represented by RPS chum Paul Dean in Union Jack pyjamas, I ran into “USA Karate” (ie: Jim Kelly) in his own stage and almost fell over laughing with joy, as his level is a wonderfully funky blaxploitation set made all the more perfect by my silly, yet stylish outfit.

The fighty parts are refreshingly clean, with few outlandish special moves or elaborate codes to memorise. You get a punch, kick, and weapon strike, each with a light, medium and strong attack depending on which way you press the stick (don’t bother with the keyboard), and chaining them together takes a bit of practice, but the best practice is real fights, not farting around in a tutorial arena for ages only for your brain to empty itself the second someone else shows up. It’s stylish, it’s challenging but accessible, and it’s hard to stop playing.

I’m not gonna lie: I was a liiiittle disappointed they didn’t mean the Wu-Tang Clan. Expansion, maybe?

As an Anglophone nation closely allied to the USA we naturally tend to focus heavily on their narratives when it comes to race relations (and as a white UK national there is a self-absolving element to that), and often overlook that the plurality of Africans we kidnapped and enslaved were taken to Brazil. We also tend to fixate on the suffering, with a faintly Pelzerish voyeurism, and again, some self-serving element as we try to distance ourselves from it by crowing about how terrible it was.

Banzo isn’t about how terrible slavery was and gosh aren’t we good for saying so. It’s a story about some people who were enslaved, and the legends they built up around their efforts to survive and resist their oppressors. An older Brazilian woman recounts to her granddaughter the story of a Quilombo – a settlement built by people who freed themselves – and it’s up to you to live it out. Allocate farmers and train up soldiers to attack farms or loot from Salvador, with a view to liberating more people, but you never know which of the people you take in could betray you.

It’s a simple game and you’re fairly stuck doing what the next plot beat demands, so it doesn’t have the immersive power it perhaps could. It might not be a stretch to call it a resource management puzzle rather than full strategy game, but the story is a decent one, and the setting, combined with the core idea of cautiously liberating people so you can train them up to kick the next slaver’s face off, has legs.

The translation needs a little tidying up, mind.

Mech games have had a bit of a revival this year, but we’re nowhere near saturation point so I’ve felt pretty pleased with MechCorp. It’s a quick and easy game to get into, taking obvious cues from XCOM in its simplified turn-based combat and cooldown-based abilities. The strategic layer is less involved, but I think overall this works in its favour.

You’re the space leader of a space mercenary company in space, charged with researching, building, equipping, and of course funding their mech-based operations during an almost-war between two major political blocs. You fly about a randomly-generated map, hoping to pick up fleets or wrecks and miscellaneous signals to investigate in space or planets. Most involve trading resources or risking loss against the chance of good loot, or of course getting into fights for whatever reason (including open piracy, which your crew tend to dislike, suggesting long-term consequences that are sadly beyond the remit of this feature). Your team of mechs can be outfitted as you’d expect, at the cost of spare parts, although unusually most components are semi-permanent and are lost if uninstalled. *.

Juggling money and parts and supplies (for research, construction, and basic operating cost respectively) is simple but gives room for decision-making to matter, and the combat moves at the right pace, with very small scale fights in which every turn matters.

*Developer K.Song Tan has since notified us that they have patched Mechcorp to address both this complaint, and my entirely subjective one about the absence of save options. Next week on UP: why all games should have an option to send me a tray of baklava.

So: this one is in Early Access. Between that and my limited time with it I can’t be certain how much gold is in its hills, but what I’ve seen so far is promising enough to get it through the hallowed portcullis of the Unknownatorium. It’s a turn-based RPG where you make the map up as you go along. The world is unknown until you explore for a turn, which gives you a couple of land tiles to place nearby, which you can then move onto for more adventures.

Turns can be spent doing this, or resting, or scavenging, or moving on, with some options leading to random encounters (the terrain type seems to influence this as you’d expect). Morale and health and supplies are affected by the encounters, and the combat, while by no means bad, is the less interesting aspect so far. The setting is what does it. Mutants overthrew humanity, in a way that’s more post-apocalyptic devastation than subjugation, leaving you to wander a decaying world populated by, yes, hostile attackers, but also… others. While humans seem to consider mutants and exposure to mutagens a Bad Thing, many of those I met were interestingly ambiguous or plain inscrutable. One group of humans were partying in what I suppose might be considered mutantface. One suspicious mutant I took a chance on trusting turned out to be a sculptor whose medium was body parts. He did not attempt to harm me, he just wanted to share his art.

The overall mood to me was not one of loss or anger or voyeuristic horror, but of witnessing something new and alien. Being truly out of place, but not quite unwelcome. If it can be sustained or explored more throughout a long campaign I’ll be very impressed. I’d like to see more of that, both in Posthuman and in other games.

Pick of the week: Flipping Death could have walked this, and I’m optimistic for Posthuman when it gets another chance come the full release. But my time as Paul Dean, seen below kicking a man to death, was simply far too much fun to deny. It’s Shaolin Vs Wutang. 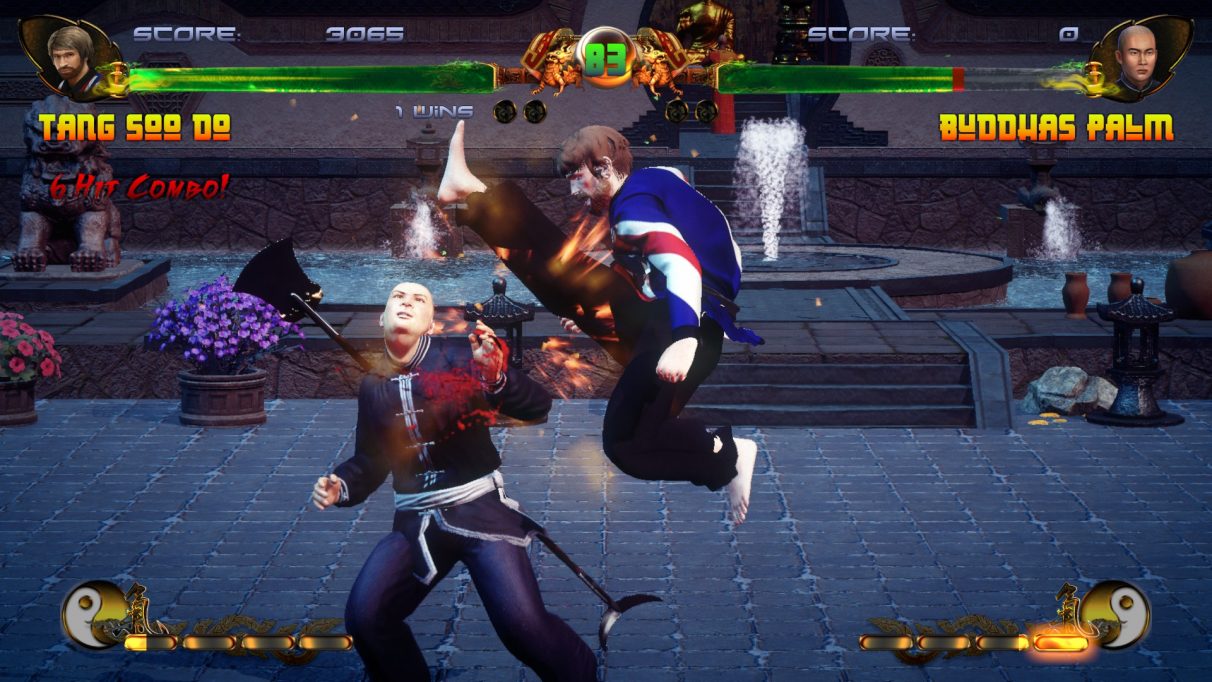 You know how every fighting game has that one infuriating smug monk who clearly cheats? This one has about five of him, with one in particular, Longfist, becoming my cherished nemesis. On my first go I fought him for an hour solid before I finally beat him, howling at the screen. Then I breezed through the next four guys and realised that he’d been training me, the serene git.

Above all though, Shaolin Vs Wutang passes the most important test: it feels very satisfying to crack your opponent in the face. I simply couldn’t stop.

Oh my god I just realised I could have gone into Posthuman with a “who killed the world” reference. What am I becoming?