Perhaps one of the most challenging things about Pool Panic is figuring out how to define it. “Do we put this in the sports sim category of Steam?” Mike Robinson pondered apprehensively. Angus Dick followed, exclaiming that “No-one’s really made a stupid game like this before.” He’s right; Pool Panic is a deeply unusual indie title, and it certainly earned its place in the EGX Rezzed Leftfield Collection two years ago, when the public first caught wind of ‘The World’s Least Realistic Pool Simulator.’

I remember it well: a proof-of-concept demonstration that gleamed with polish, and radiated potential. But what I remember most about that first debut was Mike and Angus. Excited about the reception and enjoying the like minded company, Angus doodled wacky machinations on the fly, based on prompts given to him by the other developers the Leftfield Collection is best known for. As it turns out, this isn’t dissimilar to how Pool Panic came about in the first place.

The boys first met while working together at the game developer Honeyslug. Angus had joined straight out of university, animating the art in Frobisher Says. Six months later, studio head Dick Hogg (Mike added that he gets offended if you “censor the Dick” and call him Richard) brought on Mike, who had just finished developing flash games for Gorillaz, and the two worked together on Hohokum, “which is like a double-A game, isn’t it Mike?” Angus asked, with Mike replying “I dunno how you count the A’s up if I’m honest.”

“We used to go to the cafe quite a lot for lunch,” Mike told me. “Everyone would just be throwing stupid game ideas at Angus, and he’d be sketching them out as a little lunchtime routine.” It’s here that the idea for Pool Panic was born, in the form of a rudimentary sketch labelled ‘All the Balls’. This became the first piece of concept art for the game: 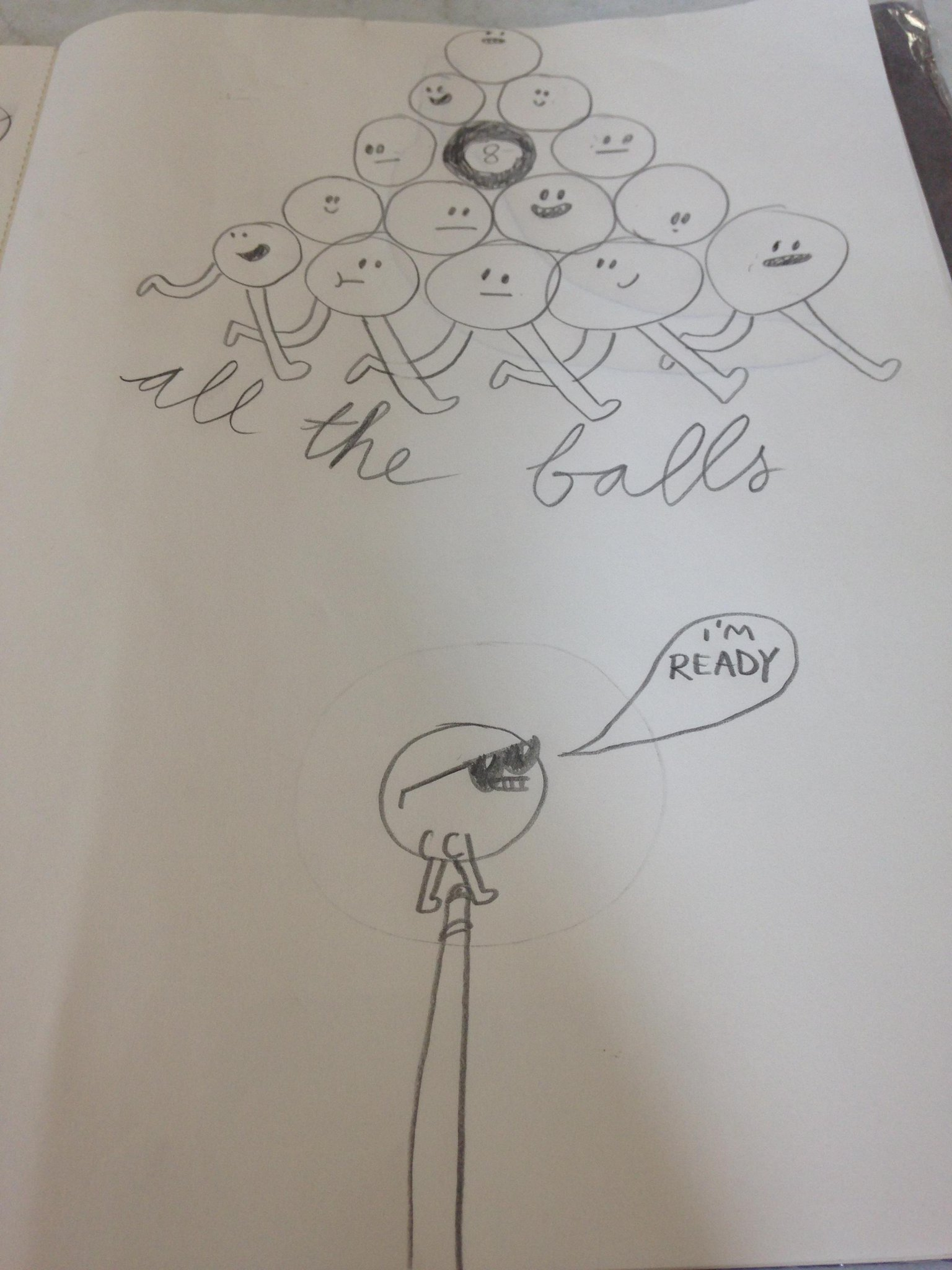 The original drawing that went on to become Pool Panic

Pool Panic began as an asymmetric multiplayer game, where one player assumed the role of a cue ball as others had to survive for as long as they could without being pocketed. But, as development continued, Mike and Angus realised a greater potential. These balls running around with lanky legs were just inherently funny. Passing on the opportunity to place them in situations playing off the inherent absurdism of their existence was something that they didn’t want to do.

Dampening the risk of thrusting players into a thick, spherical blob of strange was the fact that the foundations of the game were rooted in something commonly understood: pool. “You know that you’ve just gotta find the balls and pot them, and activate the 8-ball and then pot the 8-ball,” Mike explained. “It lets you just surround that in weirdness, basically, and people don’t feel lost by it because you’ve got that core mechanic to it.” 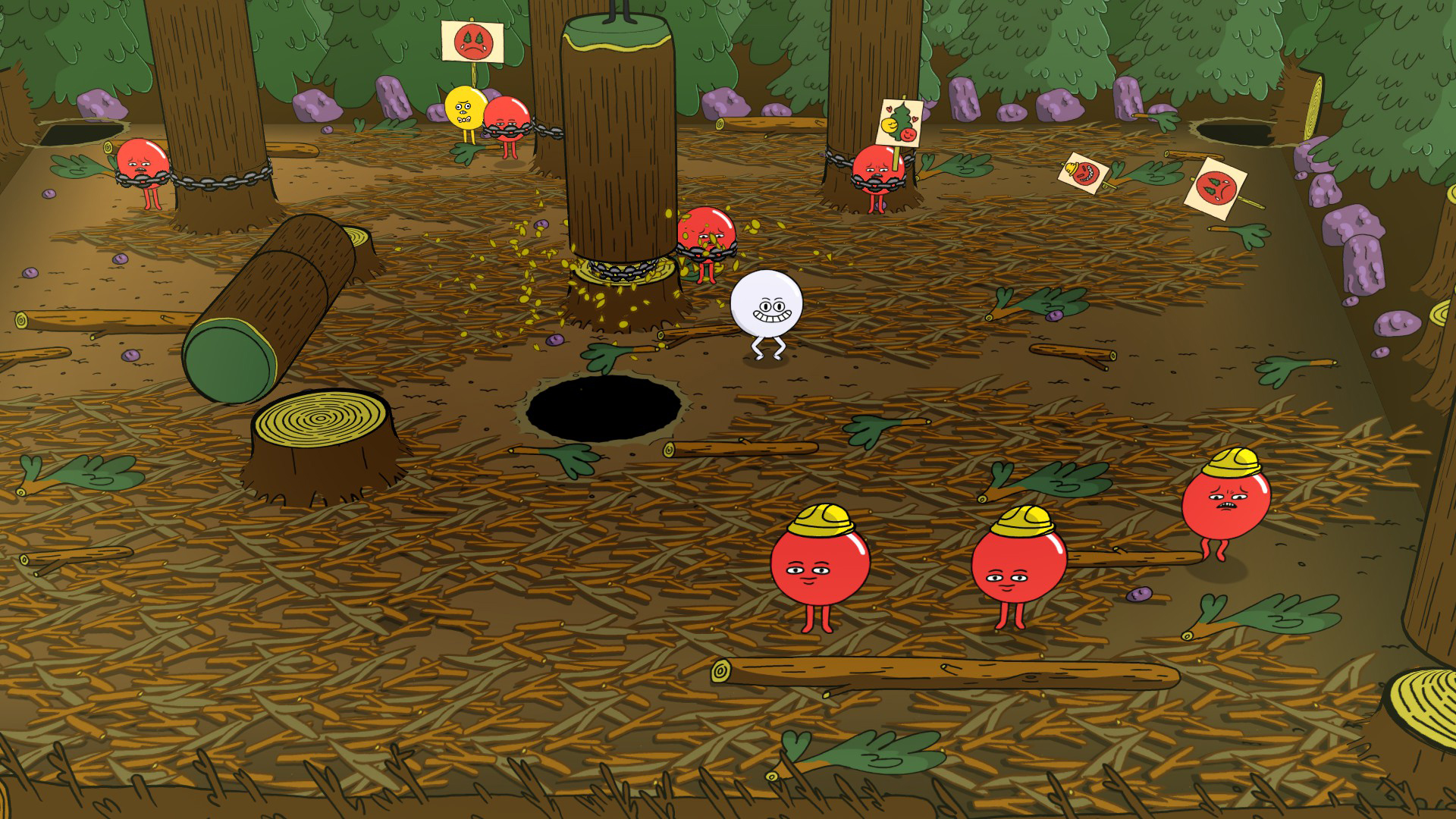 The new oddity of its aesthetic and premise didn’t only feel better to the boys, but it also presented a practical opportunity to get the most out of Pool Panic — more bang for their buck, in a sense. Mike continued: “Once we got our ball running around, it was like, well this is kind of where the humour and the fun in this game lies … the fun [is] in this, and probably the more sensible route, where we can get the most done, is just making these weird little scenes and using the characters a bit more.”

Pool Panic was shaping up to be a strange little video game, with strange characters, strange environments, and strange gameplay, all merging into a fever dream with a lot of charm. It’s unsurprising, then, that Adult Swim were interested. “It just makes so much sense,” Angus said, “And when they said they were really interested, and they thought that it matched their brand, I said, yuuup! Yes, definitely.”

Angus has always been a big fan of Adult Swim content, and he made sure the pitch document for Pool Panic made reference to the likes of Super Jail and Rick and Morty. Adult Swim’s broad approach to media also made a lot of sense given Pool Panic’s unusual position in games. “I kinda found it interesting from a marketing perspective,” Mike added. “Here’s a group that can actually pitch this game to like, cartoon buyers and the cartoon audience instead of necessarily just purely a game, uh, “video games!!!” sort of market … and it appeal to both of those areas.” 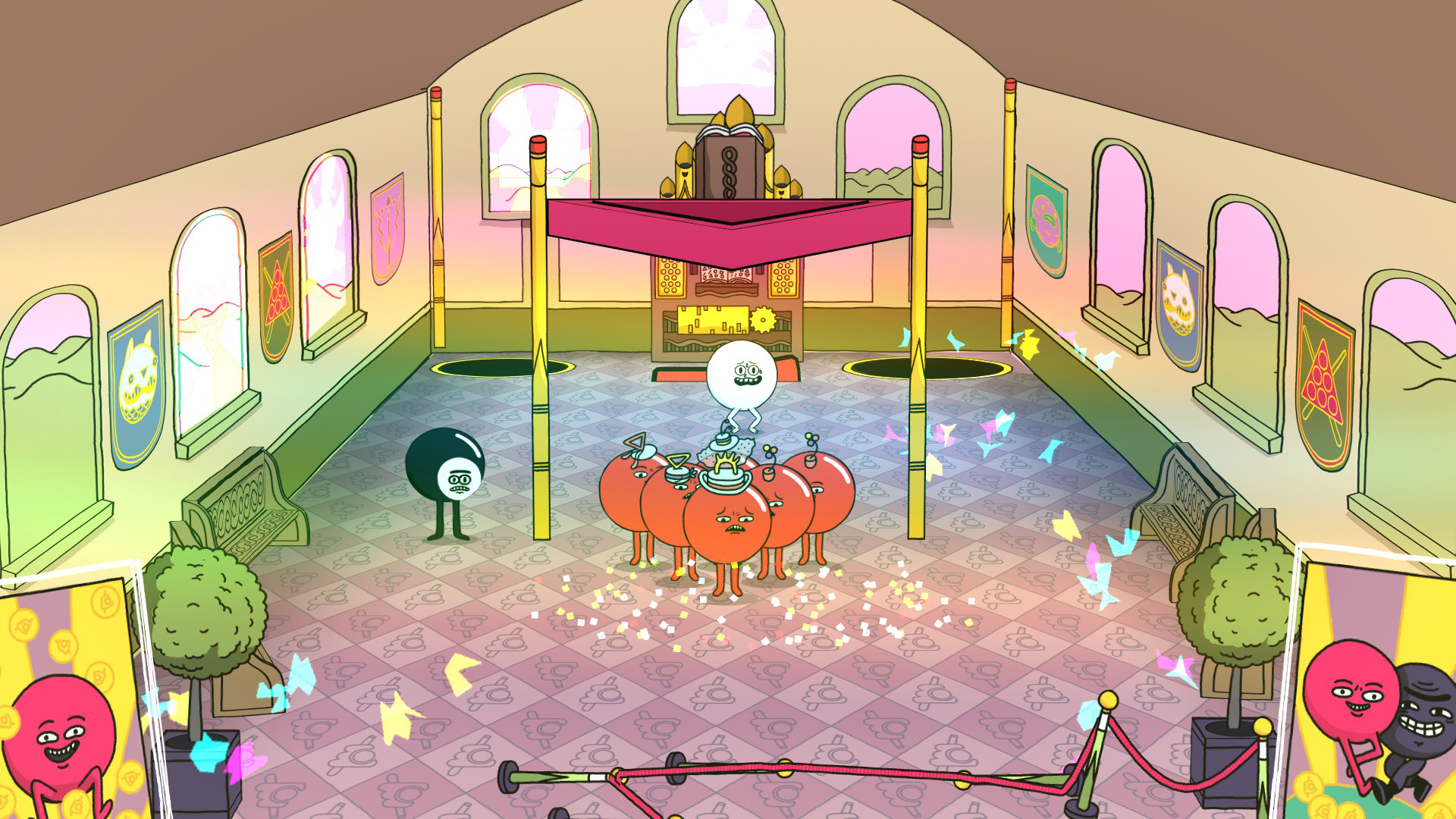 After being signed, the boys had to keep quiet on Pool Panic’s progression. While I had the chance to see off-the-record updates here or there, they were all updates unavailable to the public until around three months prior to the game’s release, when Pool Panic was announced during a Nintendo Indie Highlights livestream. It caught me off-guard, and one thing that Angus felt concerned about was that it caught everyone else off-guard too. “I personally would have liked it if we’d have been able to share quite early on.”

“To build hype and have GIFs – because it seems like everyone is sharing GIFs of their games, even when they’re early in development these days, and so there’s a community already established.” But, because of its sudden and short-notice reveal, that community – besides me – wasn’t already there. “We’re doing it now, we’ve opened a Discord and Mike’s doing this crazy livestream.”

That crazy livestream, where Mike “just drank a bottle of wine and sat there just messing around, basically,” was Chalky’s Tips, where a speech-tracking animation of Pool Panic tutorial character Chalky (drunkenly) guides viewers through the basic tricks you can employ to succeed in the game. “Originally we just had a tutorial that was, do this, do this, do this, and from feedback people were saying if we had a ball, like an ancient Wizard Ball, an old timer.” 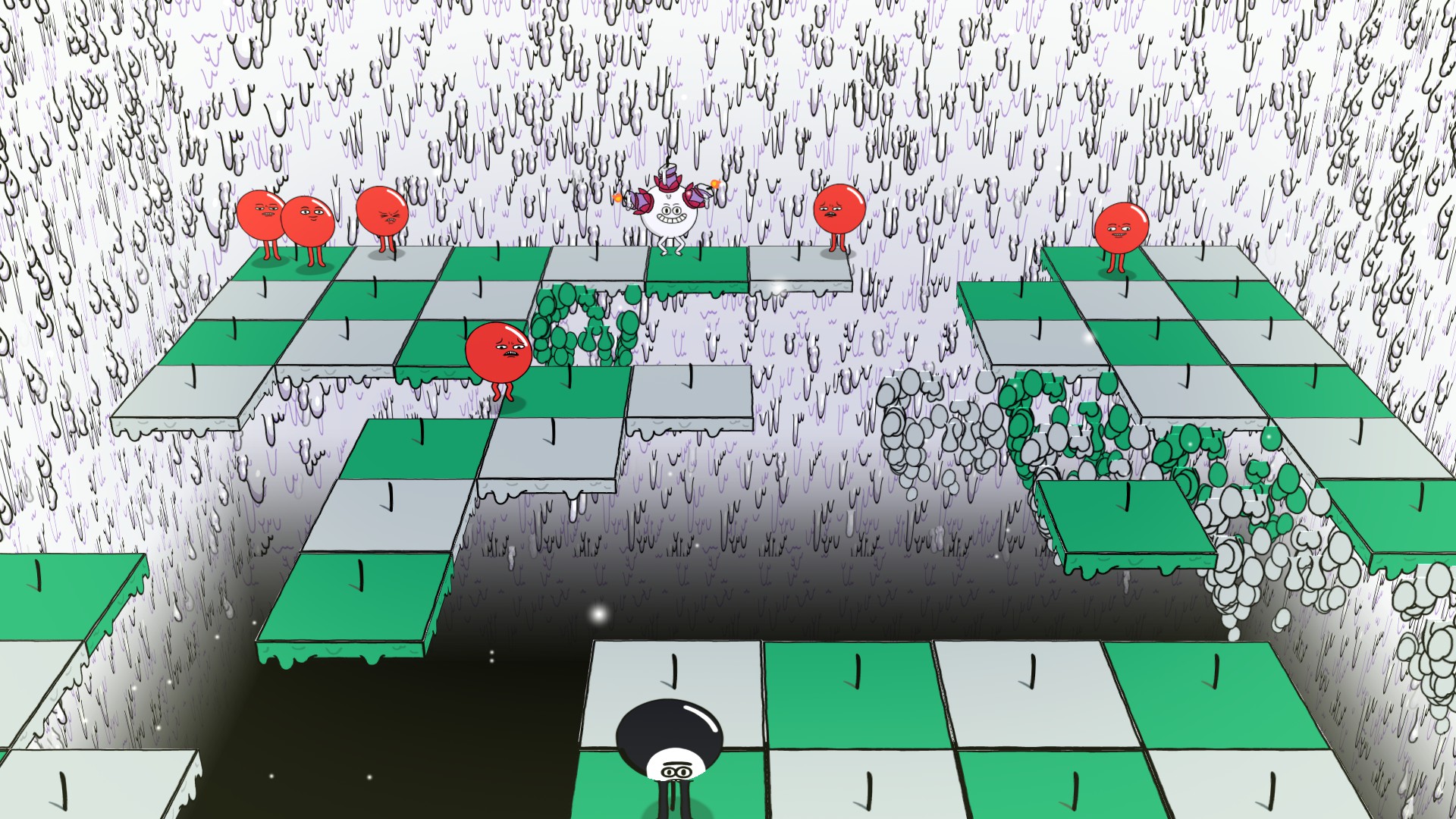 “I kinda don’t like the idea of using balls in that context. I’ve always like thinking of the balls as not really… just kinda acting out what they’ve seen and not having that sort of intelligence? So suddenly having one of them being there and saying, ‘Oh, hi there!’ just felt really weird, so we went for chalk. Once we got him dancing, we were like, yep, he’s dancing. That’s his thing. We’ve got a weird chalk cube that dances. Perfect.”

Chalky’s Tips is one of two stunts so far that have been pulled with a goal of drawing in a larger audience, the second being the Pool Panic World Championship. “I love the pageantry and ridiculousness of wrestling, I love the belts and the titles,” Angus explained to me. The World Championship of Pool Panic occurred at San Diego Comic Con earlier this year, an addition to Adult Swim’s presence at the expo. “We also got Greg Miller involved – and he is a massive wrestling fan as well – and so it just made sense to have a really silly prize and start this narrative of a title.”

As well as community building and promotion, Mike has done a lot to address the criticisms of Pool Panic in the wake of the game’s release. One common piece of feedback in particular was the lack of proper support for keyboard and mouse controls. “I guess it’s kind of… an afterthought,” he said. “A lot of people on Steam just don’t have [controllers], or can’t necessarily afford to spend that sort of money on a joypad; you’ve got accessibility issues which require keyboard and mouse to play.” At time of writing, a patch improving keyboard and mouse controls has been rolled out, and the experience is much more smooth. 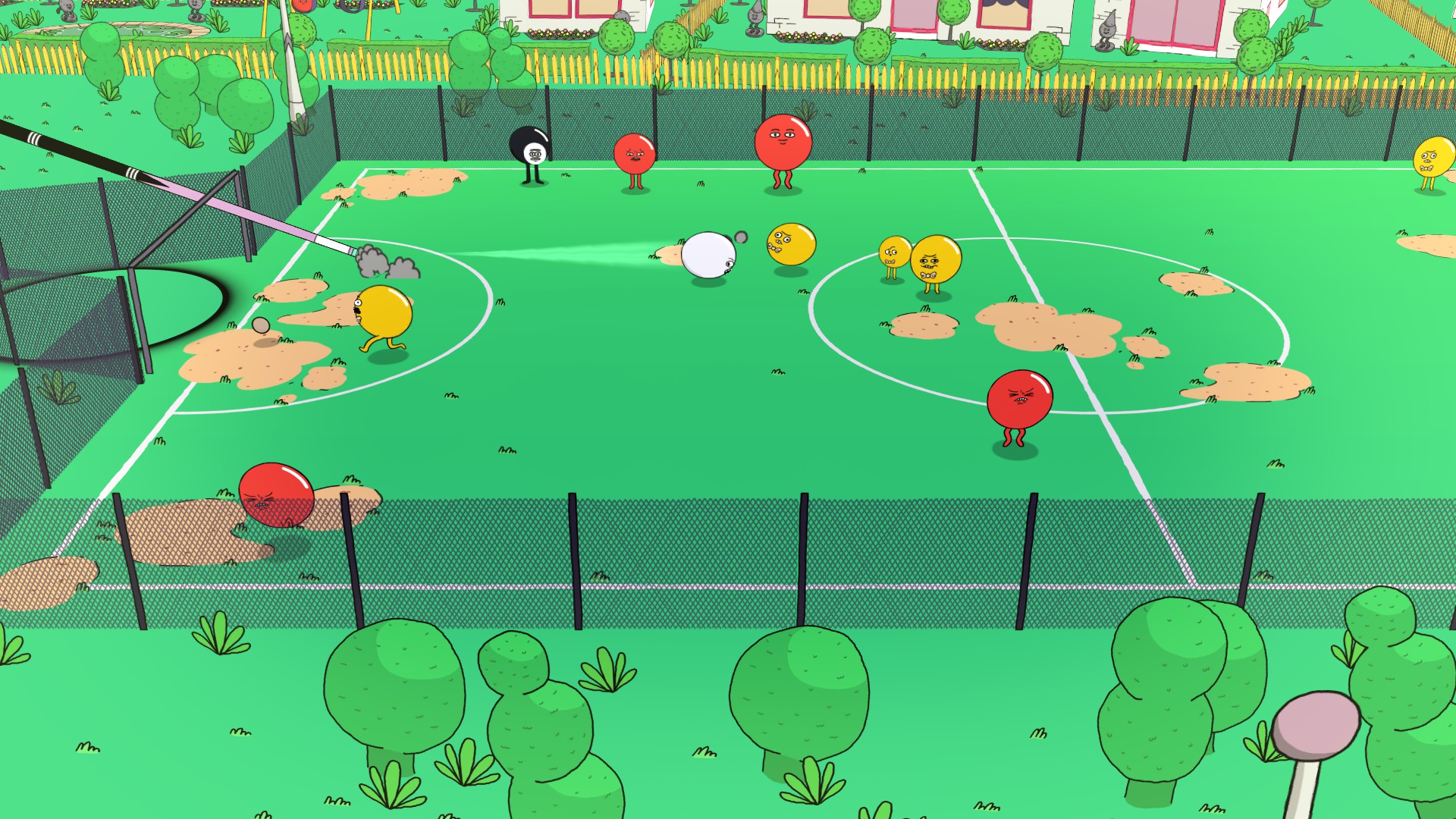 Mike professes a certain persona in interview space, saying that, “I’ve been really working on sounding like as much of a twat as I can in interviews, it’s my brand now.” Despite this, there’s a humility about his and Angus’ acknowledgement of Pool Panic’s reception. It’s that honesty – a quirky and excited honesty – that carries through into the game. Pool Panic makes no pretense of being anything more than what it says on the tin. It’s absurd and silly and just plain odd, but it’s an earnest oddness lacking any convoluted depth.

It’s a cult classic in the making, a fact that the boys both admitted to seeing said in reviews and press coverage. But that lofty label hasn’t changed how they relate to Pool Panic. They’re just happy that people enjoy what they’ve made. “Mike and I have worked on this game for a couple of years,” Angus said, “And we’re still best mates and really excited to make more things together. We hope people can really get on board with the way that we make games and our ideas, and that we won’t disappoint you.”

I asked Mike what it’s been like creating Pool Panic with Angus. “It’s been an interesting few years, on the whole just creatively, just being able to kind of making as much weird shit as we can… it’s been excellent.”