Who says the best gaming keyboard has to be a mechanical one? Razer’s Cynosa Chroma has been stuck on my desk for a couple of weeks now and hoo boy have I given it a baptism of fire, as this ended up being the keyboard I used to put together my Monster Hunter: World graphics performance article.

Yep, I’ve murdered hundreds of Great Jagrases with this £59 / $59 non-mechanical, membrane keyboard, and you know what? I actually had a pretty all right time with it – and it was a heck of a lot easier on my ears, too. Is it a better buy than your typical £100 / $100 mechanical keyboard, though? Let’s find out.

Of course, being a Razer keyboard, the Cynosa Chroma is a little different from your standard membrane keyboard. Membrane keyboards, in case you’re unfamiliar with the distinction, often have a single sheet of rubber domes inside them, which can often make them feel quite spongy and slow when typing at speed or, say, mashing a lot of keys at once in a desperate bid to stay alive in a game like Monster Hunter. Mechanical keyboards, on the other hand, all have their own individual switches with a bunch of moving parts inside them, often making them feel quicker, sharper and more responsive as a result.

Razer still describes the Cynosa’s keys (which are all made in-house) as being “soft-cushioned”, a bit like your average rubber dome setup, but they also say each key has “better housing support”, which is meant to give each tippity tap a more solid and responsive feel. In practice, they’re definitely less spongy than the old Razer Arctosa and Roccat Isku keyboards I’ve still got kicking around, both of which come from the membrane side of the keyboard family tree, but they’re also not quite as quick and ‘clicky’ as, say, Roccat’s ‘membranical’ Horde Aimo.

As a result, it would appear the Cynosa occupies a slightly weird place on the keyboard hierarchy – somewhere that’s halfway between a membrane and a membranical keyboard, the latter of which already being a sort of half-way house between membrane and mechanical. A sort of quarter-way house, if you will, but one with a greater amount of membrane DNA than anything else.

If full-on RGB lighting isn’t your thing, you can either opt for a single block colour, or just turn it off completely by downloading Razer’s Synapse software.

Fortunately, its strange, upper-end membrane-like status is reflected in the overall cost of the thing, with its £59 / $59 asking price sitting roughly in the middle of your typical entry-level £30 / $40 membranes and £80 / $90 hybrid jobs like the Horde Aimo. The question is whether it’s a better use of your money than a hybrid or membranical one if you’re looking to upgrade from a cheap membrane.

Personally, I got on quite well with the Cynosa Chroma, and would likely choose this over the Horde Aimo if given the choice – both in terms of overall looks and how it feels to type on. Focusing on the former for a minute, it’s pretty tasteful as far as gaming keyboards tend to go, and its plain, black, plastic chassis bears only the smallest of Razer logos on the very front of the board below the main keys.

I’m also very fond of its double-layered rear feet that give you two different elevation options, and you also get full, individually backlit keys with a mountain of customisable RGB colour schemes via Razer’s Synapse software. Its sharpish-corners and angular design won’t be for everyone, but I much prefer its clean-cut lines to the bulky excess of the Horde Aimo.

You don’t get any dedicated media keys unfortunately, but you’ll still find them assigned to various Fn buttons, along with a gaming mode key that disables the Windows key, an on-the-fly macro recording button and backlight brightness controls. 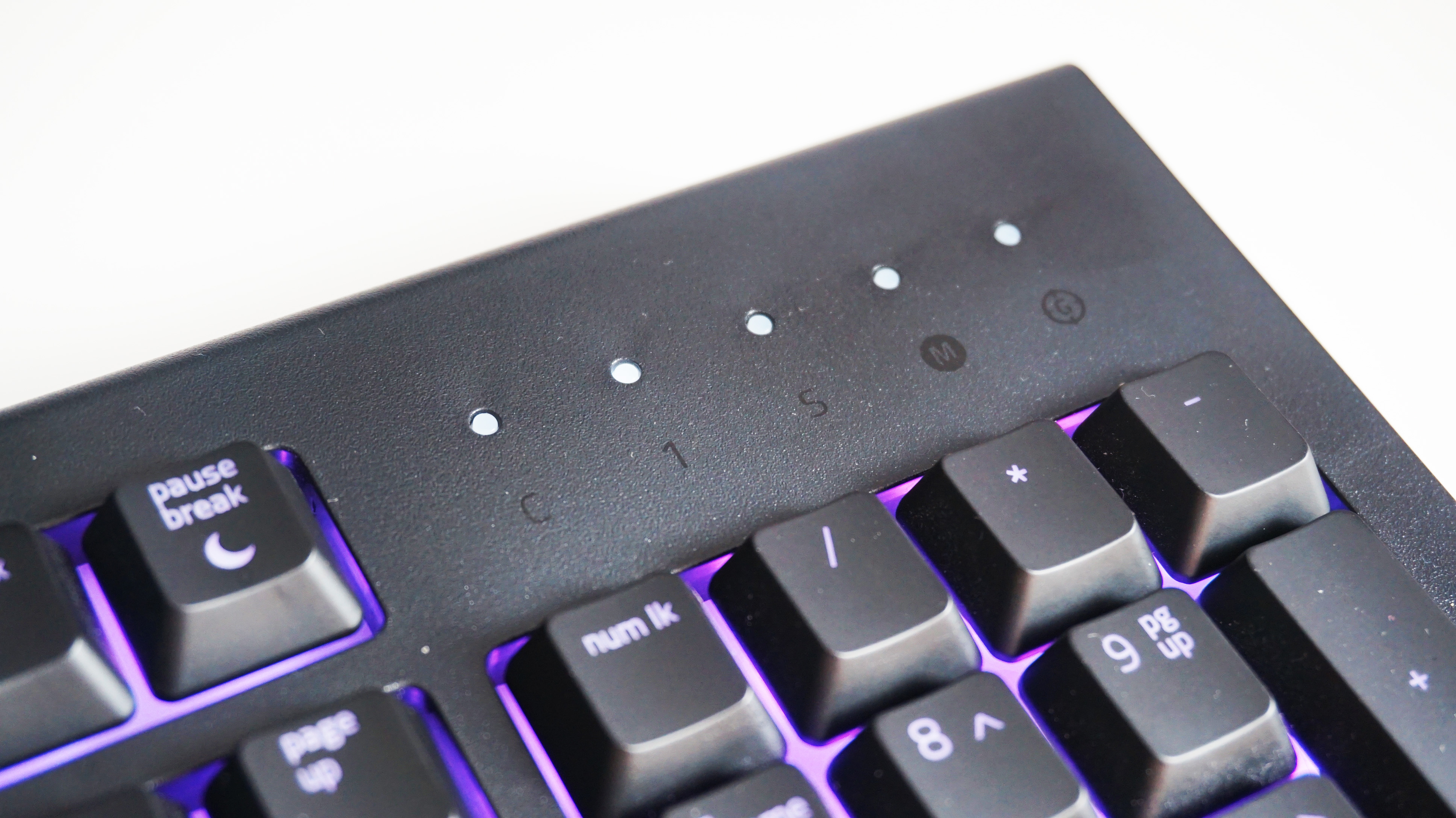 Not sure whether you’ve got Game mode enabled or got Caps Lock switched on? This small row of LEDs in the top right corner reveal all, even if the symbols beneath them are barely visible.

Then there’s the blissful fact that its aforementioned ‘soft cushions’ make it very easy on the old ear canals. Yes, there’s still a degree of noise to put up with, but man alive I miss having a keyboard that doesn’t go CLACK CLACK CLACK every time the end of my fingertips brush against the surface of a key cap.

Take my extensive forays into Monster Hunter: World, for example. It’s pretty demanding as mouse and keyboard games go, as positioning yourself next to a monster’s weak point while steering clear of their constantly snapping jaws and flicking tails is absolutely vital. Yes, there were times when I wished the space bar felt a little bit quicker and sharper for my continual and repeated dodges out of harm’s way, but not once did I feel like it was tripping up over my WASD commands, which, for the record, also received their fair share of mashing whenever I accidentally got caught up into a two-monster tussle and had to beat a very swift exit.

It’s perfectly capable of handling fast-paced shooters such as Doom, too. It probably wouldn’t meet the standards of uber competitive shooter types, but unfortunately my reflexes are just too shot to pieces (sorry) to give a proper verdict on that. For your average PC person, I think the Cynosa Chroma will do just fine.

It’s also a pleasure for typing on more generally, as I was able to get up to my normal typing speed almost as soon as I started using it. The keys never felt too high and everything was spaced just as I’d expect, allowing me to touch-type without constantly second-guessing myself.

That said, I often found I had to be quite heavy-handed with each key press, making sure I pressed them all down firmly before moving onto the next one, but as someone who’s spent several years of her working life typing away on a terrible Microsoft Wireless keyboard, it wasn’t too much of a chore to adapt my typing style in this case. Not everyone likes being so forceful with their keyboard, of course, so if you’re the type of person who prefers a featherlight typing style, the Cynosa probably isn’t going to be for you.

As a quarter-way niche within a niche, though, the Razer Cynosa Chroma fulfils its role perfectly. It offers a decent upgrade from your basic membrane without forcing you go full CLACK with a hybrid or mechanical keyboard, and you still get a fair number of higher-end gaming features such as RGB lighting, macro-recording and a Windows-key-disabling game mode without having to spend an absolute fortune on it. USB passthrough would have been the icing on the cake, but alas, you’ll have to make do with plugging your mouse into your PC like normal with this one.

Still, if your current membrane keyboard’s starting to feel past its prime and you fancy a small but firm upgrade toward something better and more responsive, the £59 / $59 Cynosa Chroma is well worth a look.