The latest Tomb Raider reboot games have always been big technical showcases on PC, and Shadow of the Tomb Raider is no exception. After a slightly rocky pre-release build that’s thankfully been ironed out in time for today’s release (have a read of John’s newly updated Shadow of the Tomb Raider review if you’re still unsure), this is easily one of the most demanding games I’ve played all year, so I decided to chuck a load of today’s best graphics cards at it to see how they all hold up.

This is by no means a complete run-down of every graphics card out there – I apologise for the woeful lack of AMD cards, but they’re proving rather difficult to get hold of at the moment – but rest assured I’ll be adding more over the coming weeks as soon as I can get my hands on them. I’ve also included a couple of older graphics cards from my own aging collection to see how they cope with Lara’s sunny apocalyptic adventure as well.

Shadow of the Tomb Raider graphics performance: The specs

As a reminder, here are the minimum and recommended specs for playing Shadow of the Tomb Raider:

Graphics cards aside, my PC well exceeds the recommended spec, as I’ve been testing everything with an Intel Core i5-8600K clocked at 3.6GHz and 16GB of RAM on Windows 10 with DirectX 12, plus all the latest drivers. To see how all the different graphics cards fared, click the links below.

Shadow of the Tomb Raider graphics performance: The goal

Before you do that, though, here’s what we’re aiming for in terms of performance. The main goal here is to find the best combination of settings to achieve a smooth 60fps at 1920×1080 and 2560×1440. I’ll also be adding in 4K performance testing at a later date, but right now, the cards I’ve tested can just about manage to run it smoothly at 1440p, let alone anything higher, so unless you’ve got multiple graphics cards at your disposal, I suspect 4K is going to be beyond the reach of most single-GPU PCs.

Right now, I’ve only had a chance to test the game on its initial opening area in the Cozumel Caves, and the village of Cozumel itself that follows immediately after. The built-in benchmark wasn’t available at time of testing, and being a Tomb Raider game, there will almost certainly be more demanding areas in the game further down the line that may not correspond to the figures you’ll find on the following pages. Rise of the Tomb Raider had its infamous Geothermal Valley that nuked the frame rate, and judging from other RPS tomb raiding experiences, Shadow’s Trial of the Eagle challenge around the 4-5 hour mark is another big frame rate killer thanks to its deadly, rotating puzzle room with about a million moving objects inside it.

As such, I’ll be revisiting these figures once I get a little further into the game, but even the opening area of the Cozumel Caves proved quite a big ask for almost every graphics card you’ll find listed above. In some cases, there was a gap of up to 20fps between the lowest and highest frame rates I recorded, with the game often slowing to a crawl as soon as Lara started scaling her first, knobbly wall with her trusty pick-axes. As such, Cozumel Square is probably a better indication of the kind of overall speed you’ll see in most areas, as here the frame rate was much more stable, varying between 5-10fps at the most, despite there being lots of people dancing about in the town square and setting off fireworks and the like.

Shadow of the Tomb Raider graphics performance: How to get the best settings

In most cases, I’ve tried to stick as closely to the game’s preset graphics settings as possible, but as with all nu-Tomb Raider games, it’s the anti-aliasing effects that pose the biggest threat to achieving a smooth and stable frame rate.

There are a lot of options to choose from, all with their own impenetrable acronyms. There’s the basic SMAA, which is the least demanding choice and actually produces nigh-on identical speeds as having it turned off altogether. Then there’s the slightly fancier TAA, which I found produced pretty much exactly the same speeds as the next rung up, SMAAT x2. As such, I’ve pretty much discounted TAA as an option, as it not only looks worse than SMAAT x2, but you’re not gaining any extra performance from it either.

Then above SMAAT x2, you’ve got the WARNING WARNING signs of SMAAS x2, and the big daddy SMAA x4. These really are quite taxing on the old GPU front – even for higher end cards. Some of them can do it, but generally, I’ve found that the SMAAT x2 setting provides the best compromise between obtaining all those lovely smooth edges and still getting reasonably nippy frame rates.

I’d also advise against settling for Shadow’s Lowest graphics setting, as this just looks so awful it’s not even worth playing. This is because Lowest is the only graphics settings that turns off volumetric lighting, which (as you can see from the series of images below) just destroys any sense of depth or natural lighting and genuinely makes me want to do a little vom in my mouth every time I look at it. So try and keep that turned on if you can. 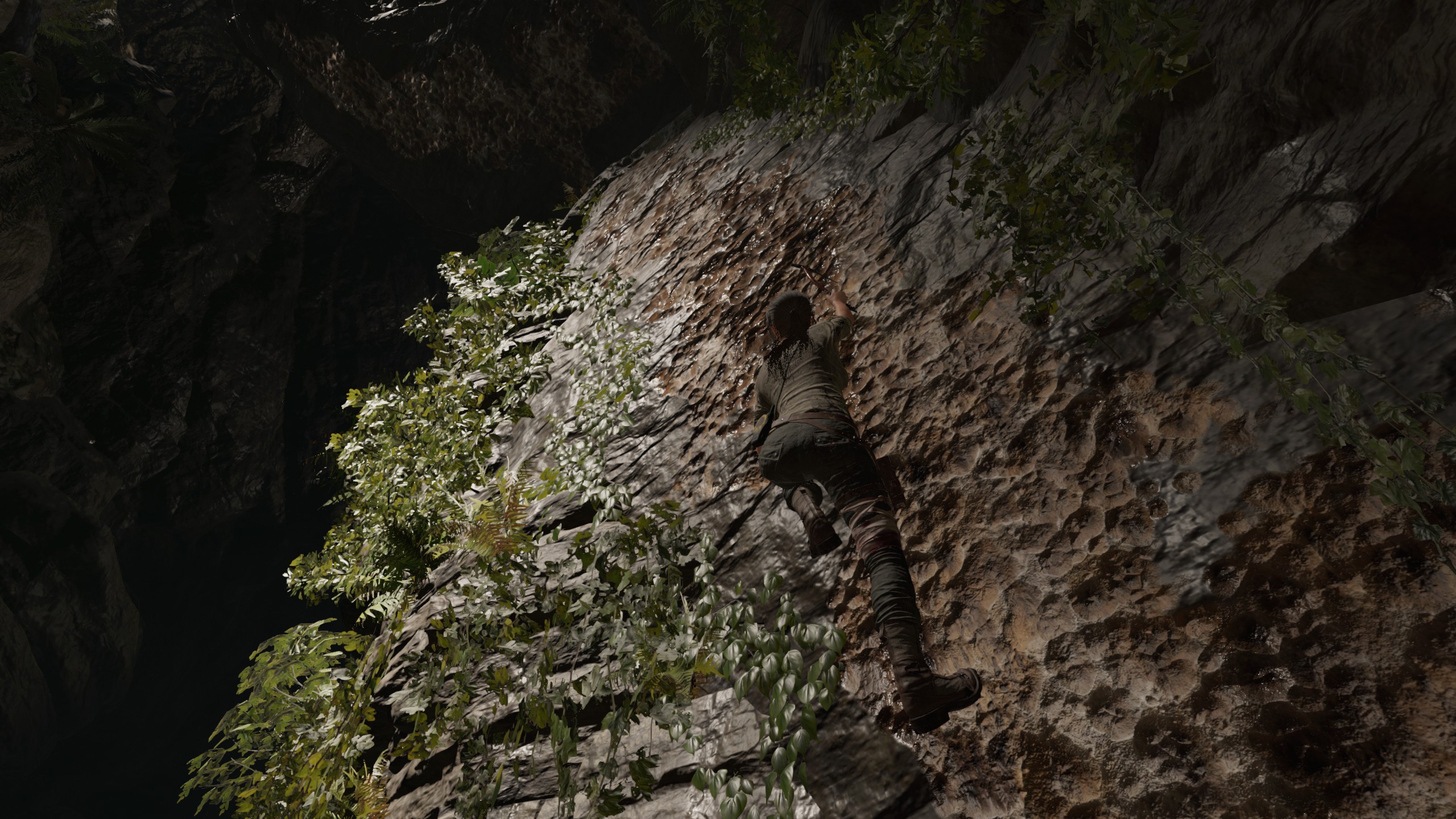 Shadow of the Tomb Raider on its Lowest graphics setting… 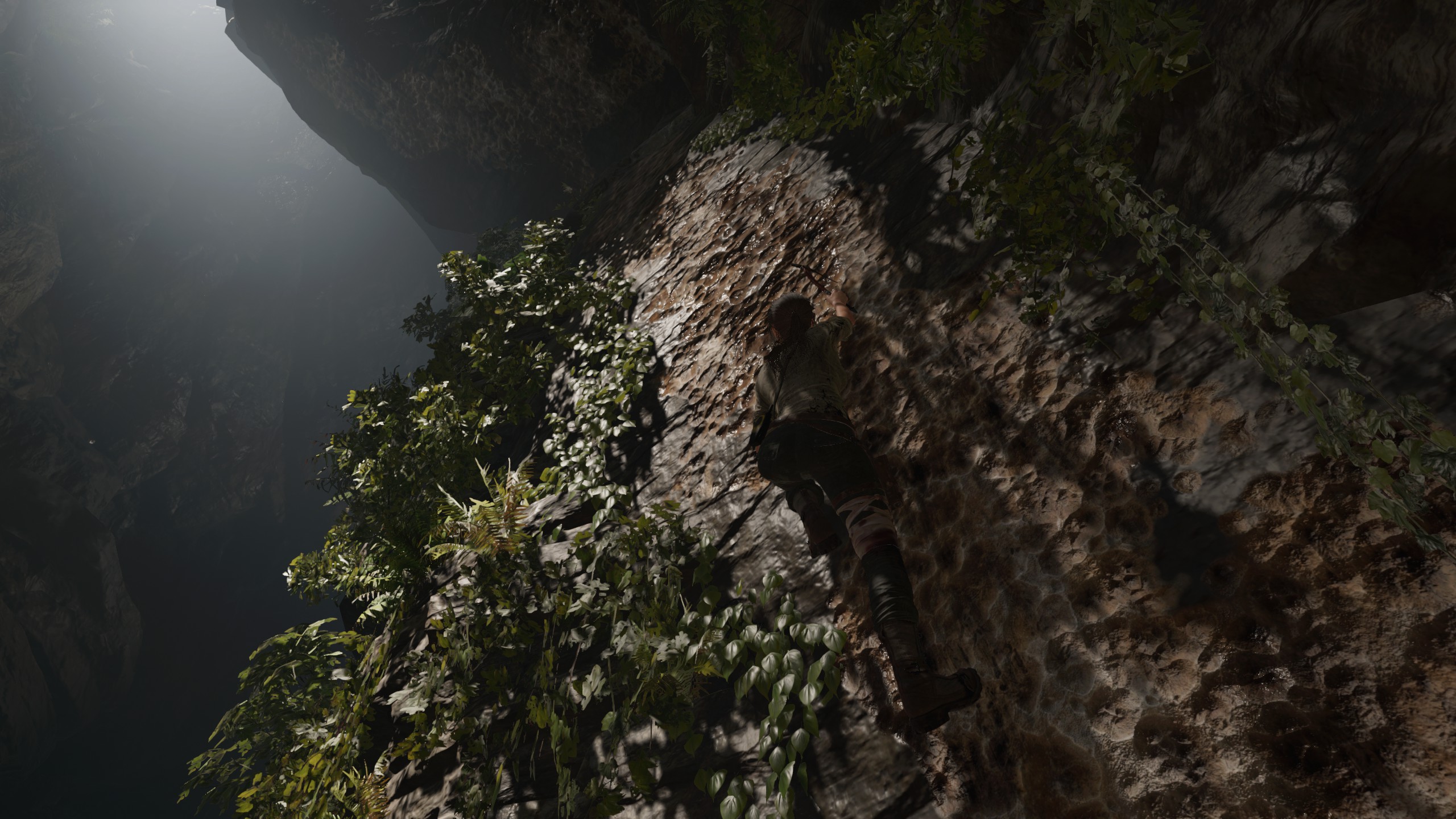 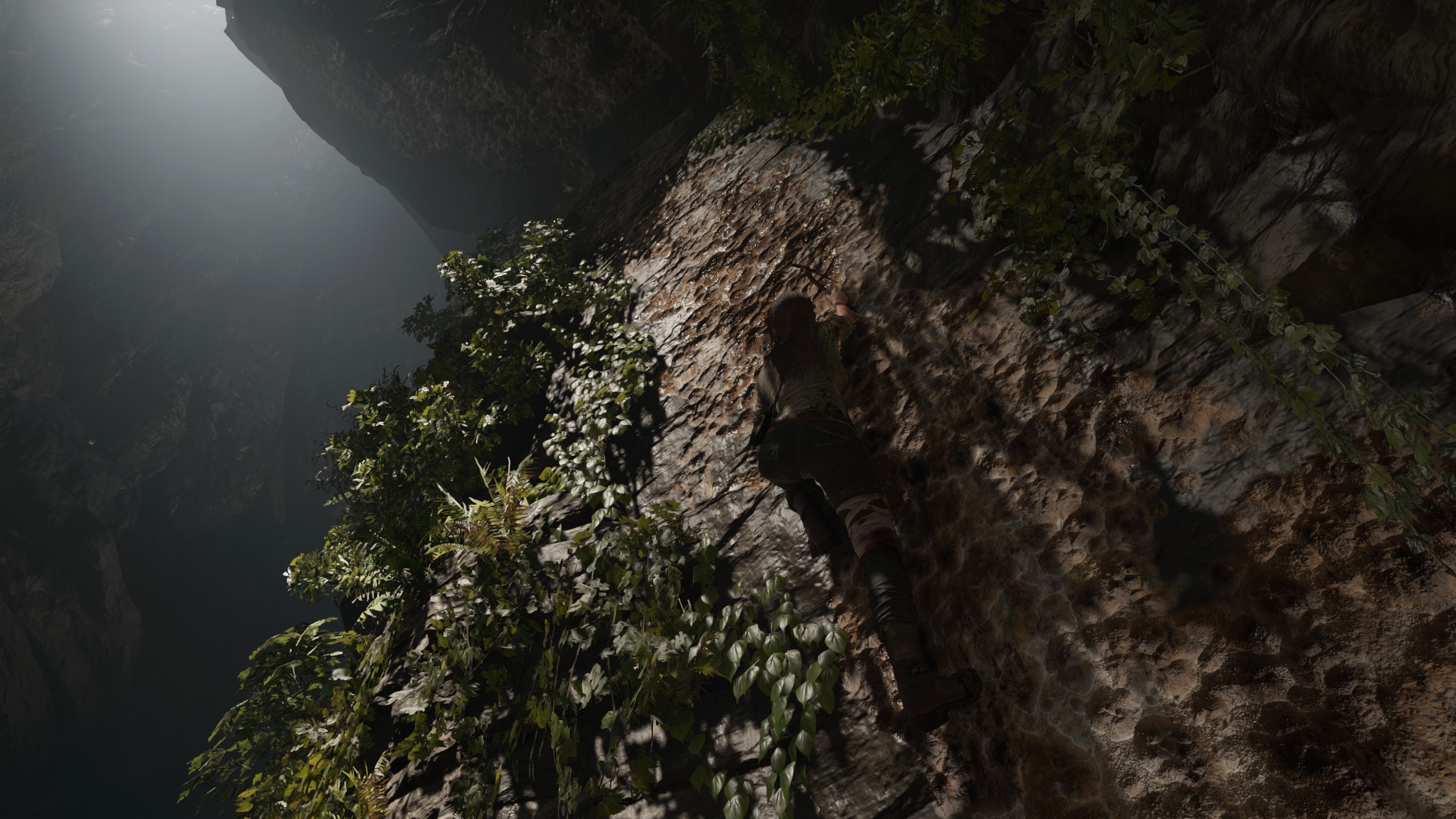 …a rather Medium looking cave… 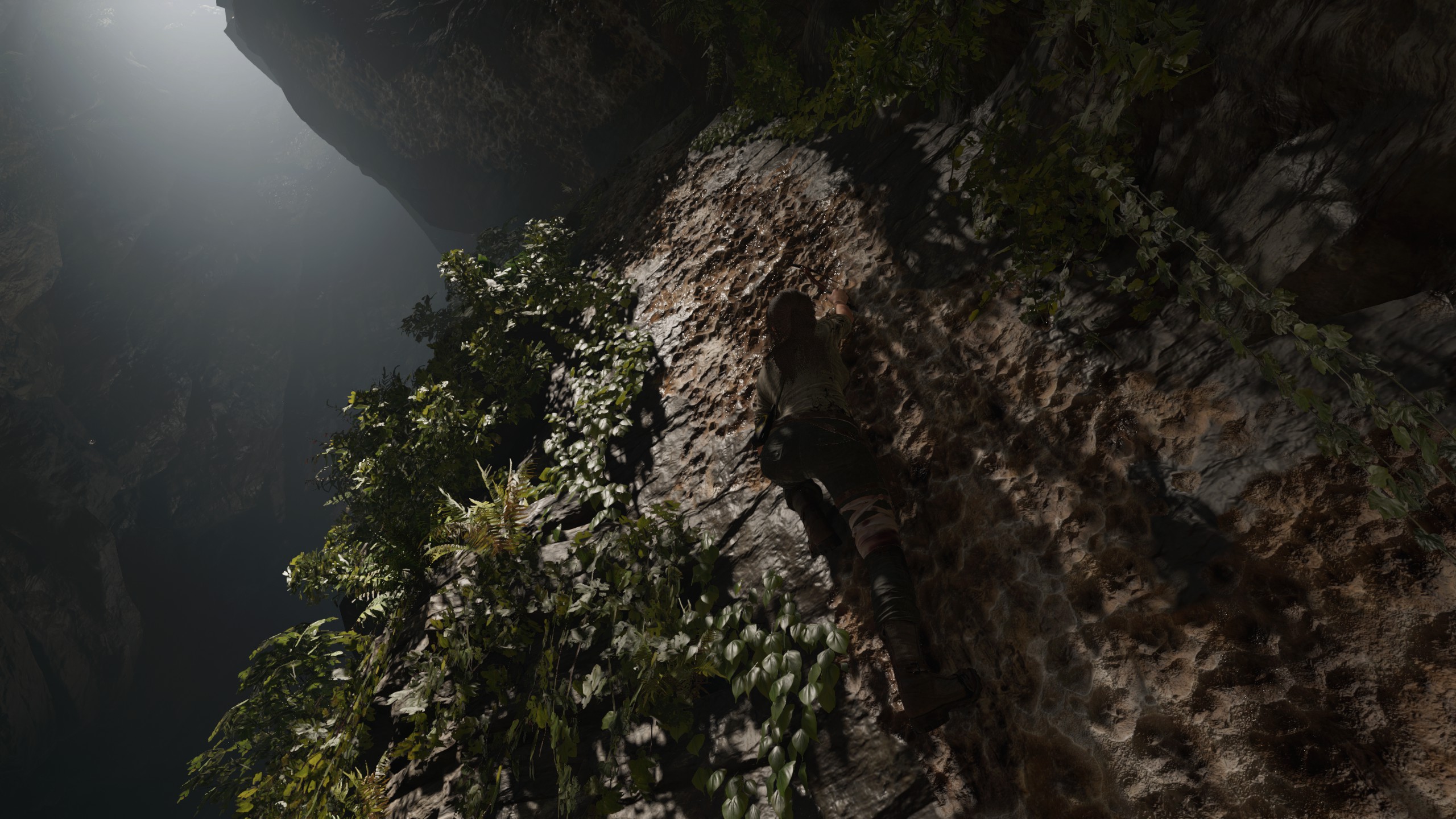 …a High up Shadow of the Tomb Raider … 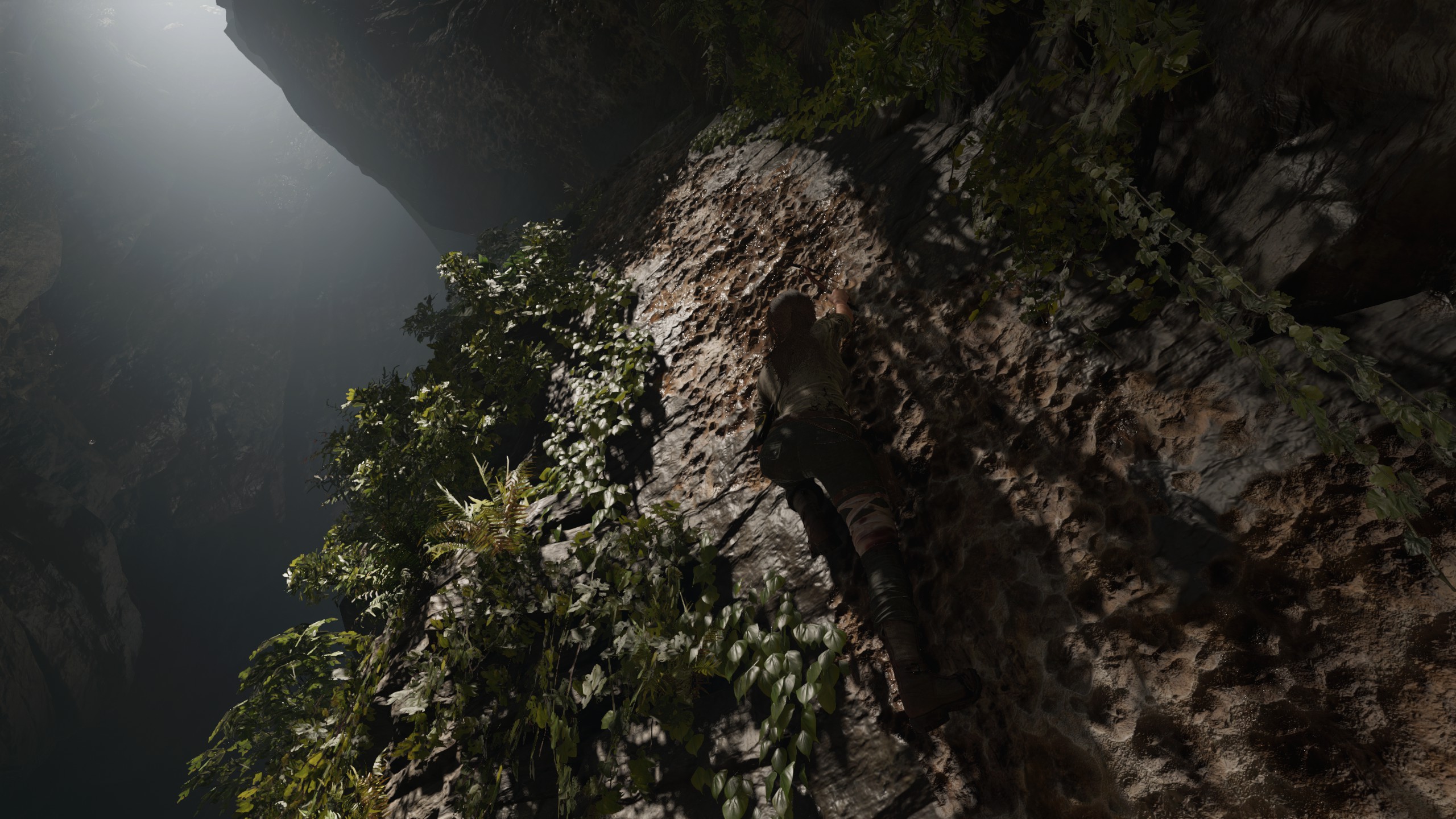 …and what the pinnacle of Shadow of the Tomb Raider should look like on Highest.

Otherwise, I found Shadow’s myriad of other settings didn’t make a huge amount of difference in the grand scheme of things, whether it was Lara’s luscious Pure Hair (which only varies between Low or Normal with no Off option) or the ambient occlusion. Fear not, though, as I’ll be updating this section with more thoughts and analysis next week.

Tagged with AMD, Eidos Montreal, feature, graphics card, graphics cards, Hardware, how much graphics does it have, Nixxes, Nvidia, Square Enix, Shadow of the Tomb Raider.