Now streaming live:
Premature Evaluation is the weekly column in which we explore the wilds of early access. This week, Fraser’s racing towards choppers and being very unsportsmanlike in Techland’s undead battle royale spin-off, Dying Light: Bad Blood.

The sound of an explosion and a huge burst of flame sends me sprinting for cover. The attack wasn’t directed at me, it turns out. One of my fellow survivors had walked into a hive of zombies and he was chargrilling them. I stay hidden behind a van and watch him duke it out. We’re both after the same thing: blood samples that will allow us to level up. He takes out the boss and, exhausted and bruised, proceeds to collect his samples. That’s when I throw my own molotov cocktail and leap in with my electrified axe. “I’m so sneaky and also handsome,” I think to myself as I pick his corpse clean and grab the samples for myself. I’m still feeling pretty smug when I leave the hive. Unfortunately I don’t notice the molotov cocktail hurtling towards me.

Dying Light: Bad Blood hasn’t sprouted from the same evolutionary branch as Plunkbat or Fortnite. It’s a small-scale battle royale set in a compact urban arena designed for 12 players. Ranged weapons are rare, there’s no shrinking circle and you’re just as likely to die at the hands of a zombie as you are another player. Rather than detracting from the PvP, these PvE threats are Bad Blood’s linchpin, elevating player confrontations and driving the match forward in lieu of walls of toxic gas. 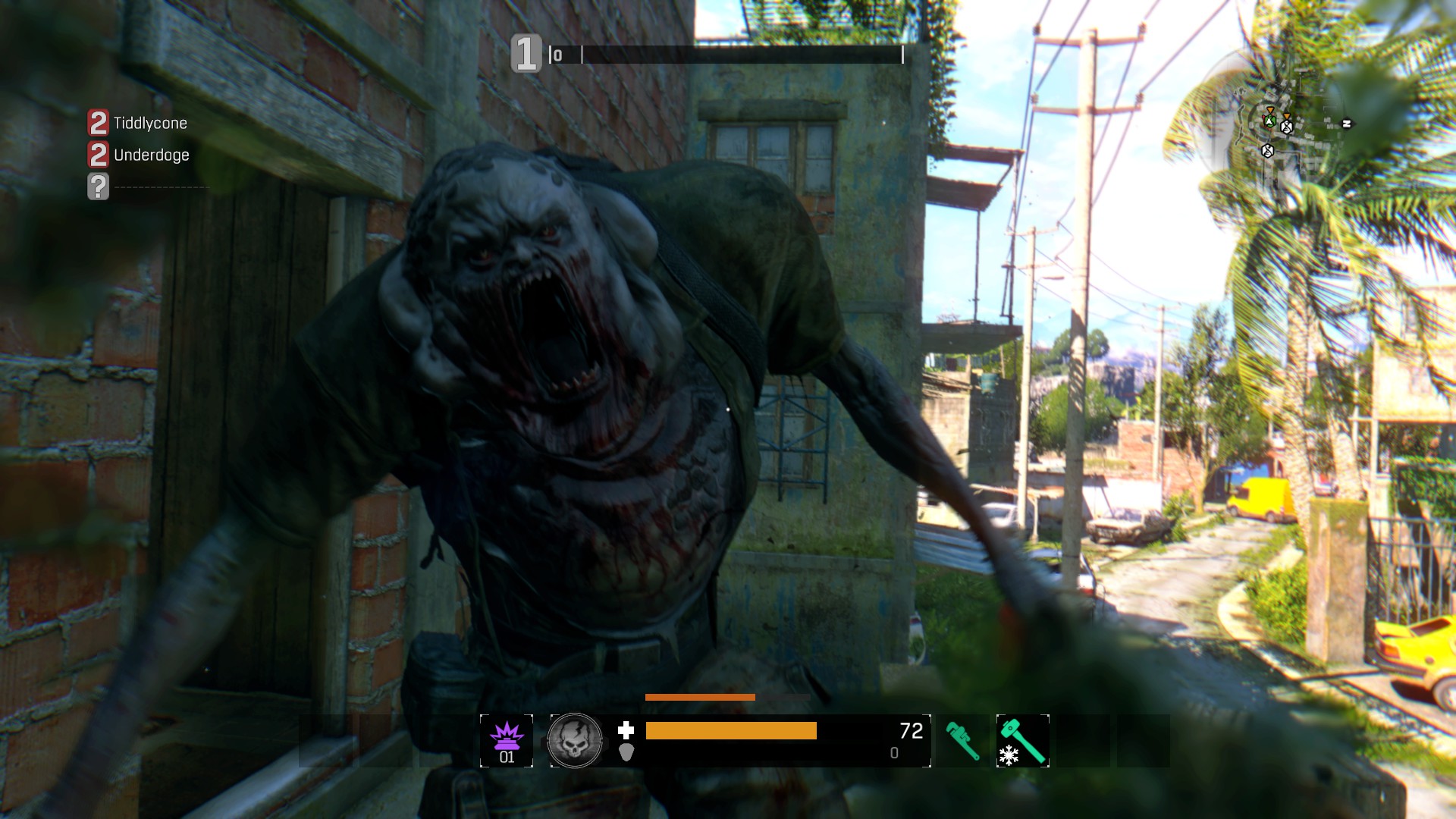 Fights in Dying Light: Bad Blood don’t take place across the length of villages and huge fields; they’re almost always close-range duels where you know exactly where your killer is, usually because you’re looking right into their eyes. And they’re tricky. Your stamina drains quickly, so you’re always dashing in and out, and you never know what your enemy has up their sleeves. You might be about to bring down your hammer for the killing blow when they whip out a huge riot shield, or they could parry, stun you and then fling a mine under your feet. That’s why it pays to be an opportunistic bastard.

The map is a smaller version of the slums from Dying Light, but with only 12 players it’s more than large enough for people to sneak around in, especially when everyone is a parkour master, scaling and leaping across buildings like it’s nothing. But you know that everyone’s gunning for the hives, which are all marked on the minimap. There are some good reasons to venture into these dangerous places. Samples translate into experience that gives you more health and stamina, and when someone reaches level 5, the evac chopper gets called in, turning the game into a bloody race to the only available seat. This makes them perfect places for an ambush. 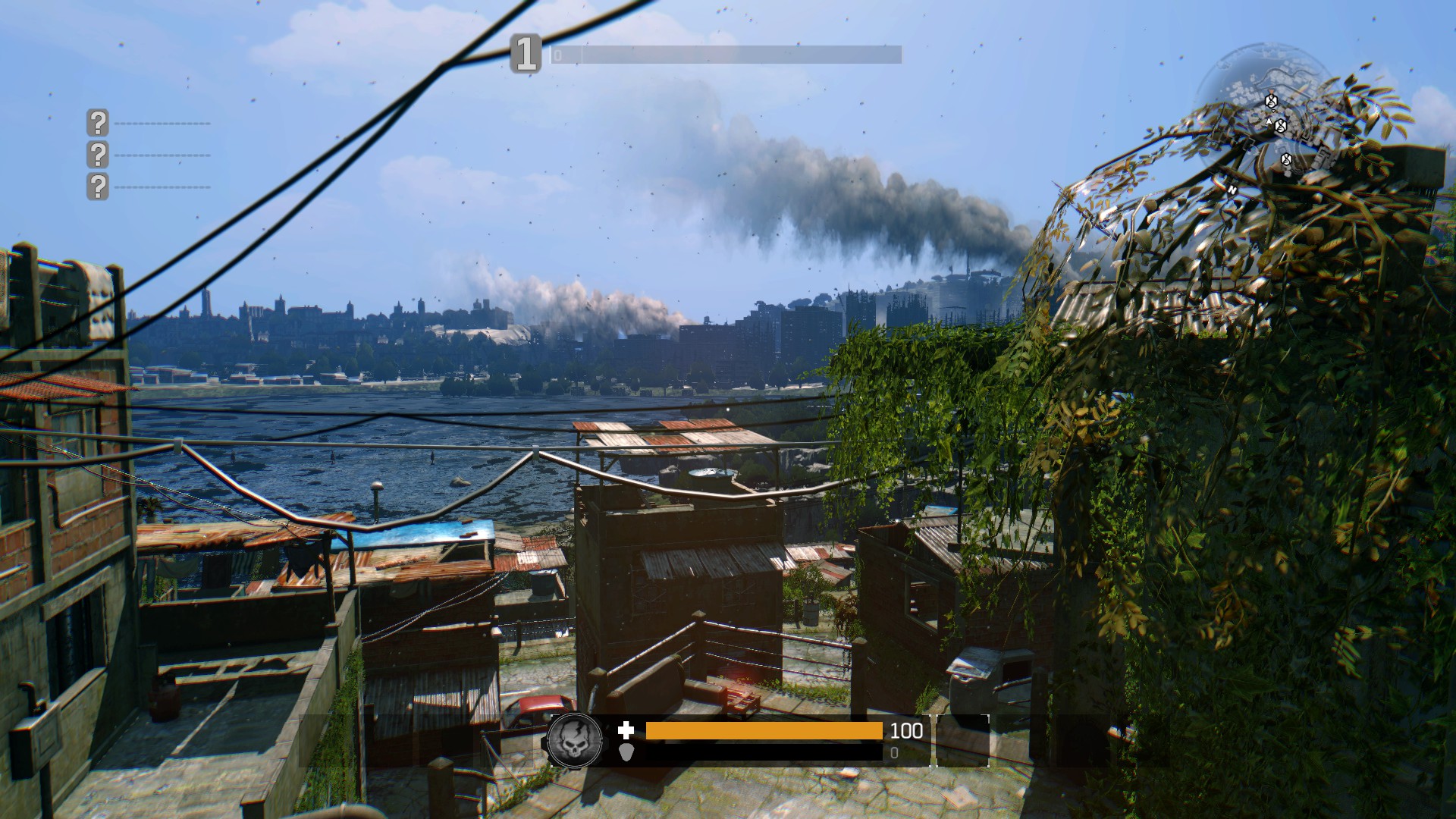 PvE works here because the zombies don’t just roam the map freely. They only appear near the hives, which are usually enclosed spaces, though the runner and shambling variety will give chase if they see you. They’re never just a distraction. The regular zombies are easy to kill but can be a serious threat if they surround you, while the massive, armoured lads can take a pounding and squash you with a few hits. Bosses require a bit of preparation, so I typically leave them if I find one early on, but that comes with its own risks, namely that it gives other players a chance to take the samples for themselves.

There are none of those long lulls you have to get used to in the large-scale games, where you’re just being pushed along by the circle, hoping you’ll happen across someone, anyone, to shoot at. Bad Blood’s matches are too short for that, typically running for less than 15 minutes, but there’s also just a lot to do. There’s an abundance of weapons, mods and items everywhere, so it doesn’t take long to gear up, giving you the rest of the match to beat up zombies and set traps for your fellow players. The structure and the minimap full of objectives naturally make it more proactive; this isn’t a meandering ramble across the countryside.

Adding one kind of objective, however, just makes the lack of other objectives more noticable. The emergent stuff that happens around them is great, and fighting zombies remains just as much fun as it was in the original game, but repetition does start to dilute the challenge. I already know exactly how to deal with each kind of hive that appears, whether it’s got a tanky boss patrolling it or some foul, toxic spitting zombies spying on it from on top of a bus, though there are still loads of ways it can go wrong, especially when another player pops up.

It’s not completely clear what triggers it, but I have noticed gangs of living NPCs appearing, but I’ve not had much luck stealing whatever they’re protecting. Some more non-essential objectives might have interesting ramifications, too, egging players on to taking more risks in the hope of gaining an edge. Lots of Dying Light’s missions could be co-opted and still fit comfortably, even with the change in genre. Dying Light already has air drops, for instance, and I wouldn’t be surprised to see them make an appearance. [Apparently they already have! That’s what those aforementioned NPCs are guarding.] 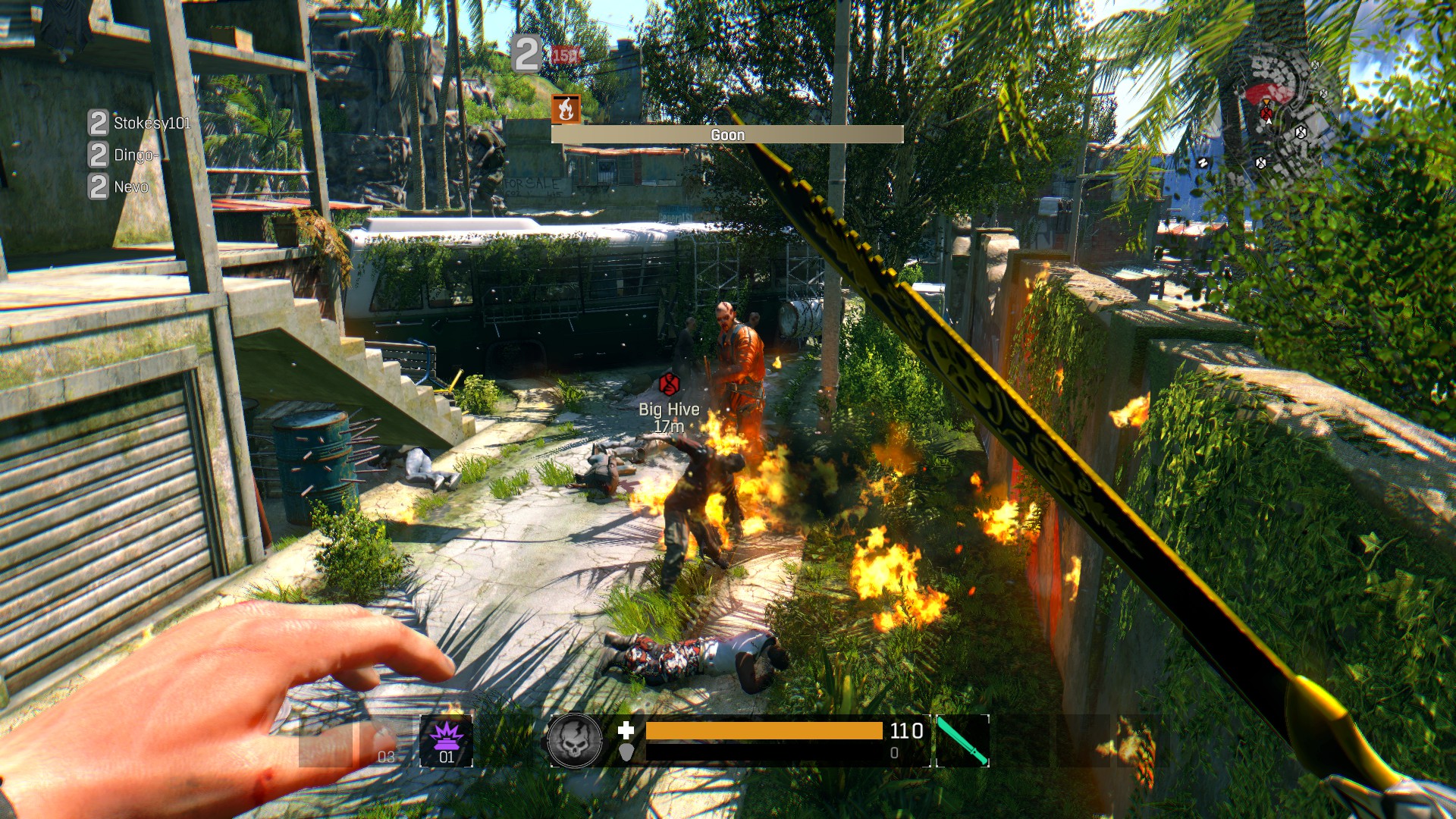 While Bad Blood encourages players to be aggressive, it’s not the only viable path to victory. Only one player needs to hit level 5 for the chopper to get called in, so theoretically you could snatch the seat from everyone without getting a single sample from the hives. The other players would have a higher maximum health and stamina, but that matters less if you’ve got five grenades at the ready and you get the drop on them. All you need to do is wait for them to kill each other off and you can swoop in at the last second. When they’re dead, you can grab their samples and fly off into the sunset.

The difference between a level 3 player and, say, a level 5 player isn’t all that apparent and seems like only a small advantage. Maybe that makes the final fight more even, but it makes the already pretty thin progression feel a little meaningless. I never stopped trying to level up as quickly as I could, because any edge helped, but there was less satisfaction with each ding. Dying Light’s skill trees would be far too convoluted for these brief battles, but something beyond a wee bump in health and stamina would make those dangerous fights with Hulk-size zombies a lot more rewarding. Better drops might help, too. Right now, when you kill a boss all you get this tiny bit of armour that will protect you for about a second. 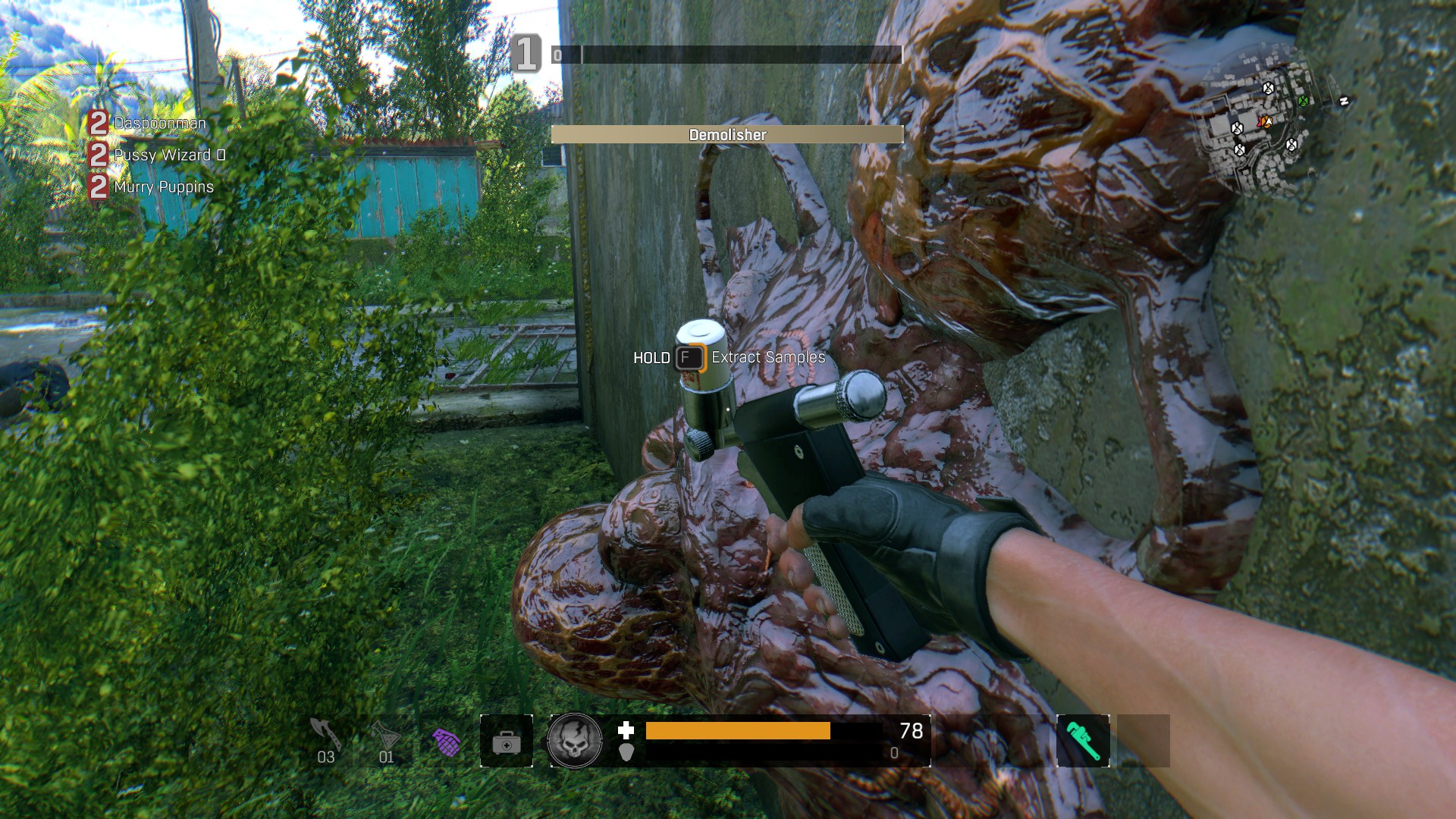 A chase begins when the helicopter is due. The first player to reach level 5 also gets marked on the minimap for everyone to see, so players aren’t just racing towards the chopper – some of them might also be looking to take out the main competition before the final fight. The parkour means that running away from a fight is also pretty easy, so chases happen throughout the game. It’s created some consternation among some players, but Bad Blood was built for this sort of thing. Running across rooftops, weaving through the maze of apartments, making leaps of faith – it’s all exhilarating stuff even when you aren’t hunting down another player.

Some of the tensest moments in Plunkbat are when you’re crossing a field, stuck out in the open, but Bad Blood is the opposite. I’ve started looking up a lot. Enemies can come from anywhere, but the worst is when they come from above. It’s incredibly disorientating as you’re forced down to the ground, the camera spinning until it reveals your assailant plunging a knife into you. Every roof becomes a potential assassin’s perch, so wandering through streets lined with tall buildings is not a particularly stress-free experience. Out in the open, you can at least see threats coming. 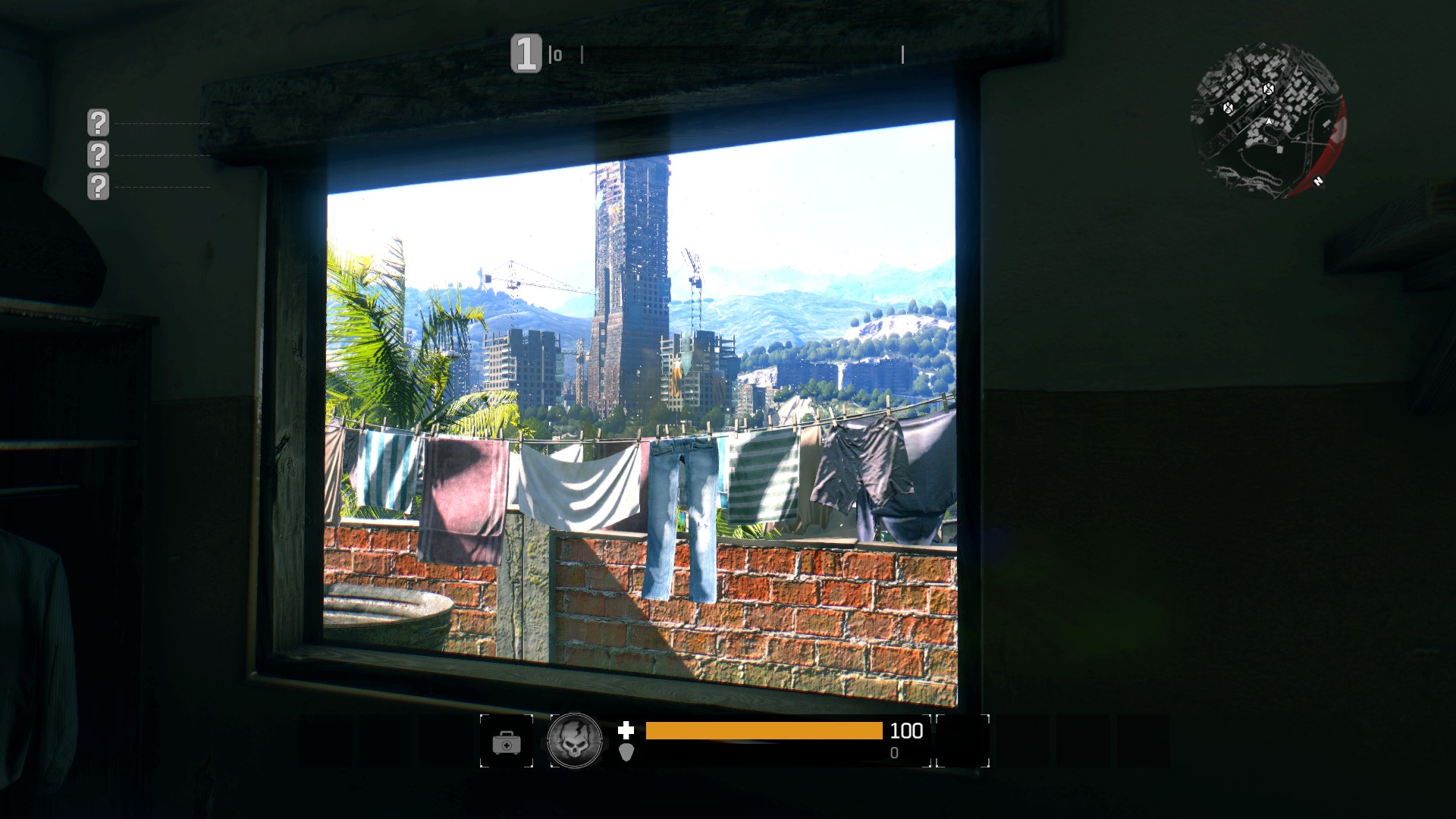 Techland has brightened everything up quite a bit, so the slums are more vibrant and colourful than they were in Dying Light, but don’t be fooled! It’s still pretty bloody grim. Body parts get hacked off, you can see bones get crushed and the whole map is a smouldering wreck. It’s not a horror game, but it’s full of horrible things. The groans and screams and general apocalyptic din is sometimes a distraction, sometimes an indication than another player is near, and always oppressive. The noise kept me on edge, chiseling away at my nerves. Battle royales often end up being extremely broad in tone, which doesn’t leave much room to develop their worlds or even give them a cohesive atmosphere, but Bad Blood benefits from a pre-existing setting that, while not particularly original, at least has some character.

Rather than trying to contort Dying Light around battle royale conventions, Techland has created a miniature version of Dying Light and made the battle royale elements work around that. It undoubtedly helps that the previous game’s multiplayer modes were able to serve as a foundation, and the result is something that’s well thought out and surprisingly polished, especially for a new early access game. 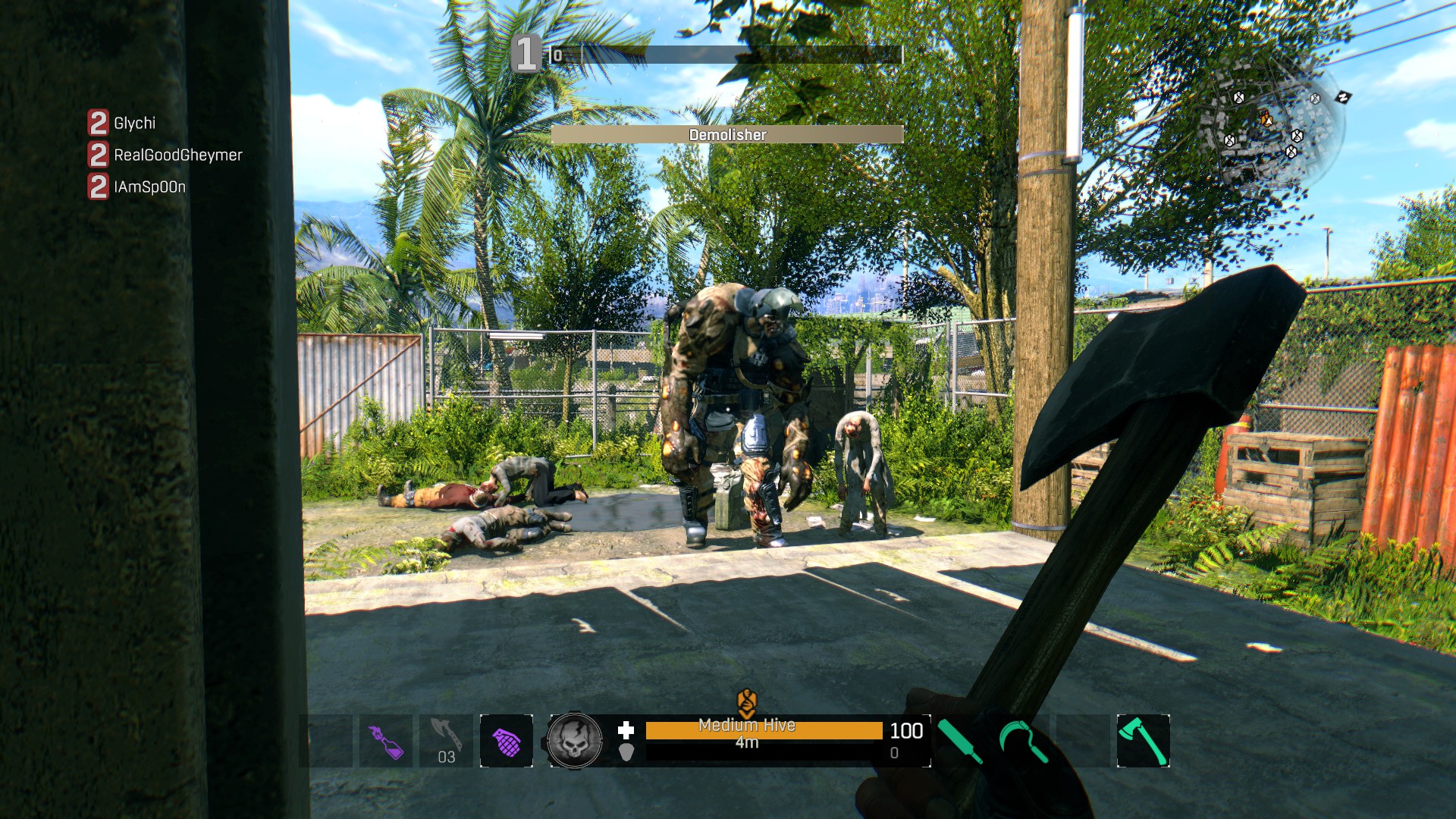 By sticking closely to its predecessor and eschewing a lot of battle royale mainstays it definitely couldn’t be mistaken for Plunkbat, but it risks leaning the other way and ending up being too much like Dying Light. It could do a lot worse than being compared to either, but with a single map and mode, it does feel a bit more like some multiplayer DLC rather than a standalone game. More modes are in development, however, along with a new map and an ‘advanced metagame’, all which will hopefully flesh out what is an already promising battle royale.

Points deducted for calling Techland calling it a ‘brutal royale’ though.