Crucial’s SSD line-up is in a bit of a funny place right now. As you may well have seen from our SSD rankings, their mid-tier MX500 SSD is currently cheaper than their entry-level BX300 SSD in practically all size categories above 120GB, and their latest BX500 SSD on test today only muddies the waters further.

It’s pretty easy to get started with the BX500, as each size comes with an installation guide that gives you a free copy of Acronis’ True Image software to clone your existing drive straight onto your new one. That said, buying an SSD at this end of the price spectrum does come with a couple of compromises. This includes only getting a three-year limited warranty as opposed to the five-year ones you’ll find on more expensive drives such as Samsung’s 860 Evo and Crucial’s own MX500, as well a lower endurance rating.

In truth, I wouldn’t be too worried about this. As Crucial put it themselves, 40TBW is the equivalent of writing 21GB of data each day for five years. Most people don’t use anywhere near that level on a day-to-day basis (I certainly don’t), so I doubt it will pose much of a problem unless you’re regularly working with large video files or continuously installing (and uninstalling) big games every day. If you are, you may want to consider spending a bit more to get yourself a better endurance rating.

In terms of overall speed, the BX500 performed surprisingly well, especially compared to the similarly-priced WD Green SATA SSD that I’ve currently got in my own PC. When I subjected my 240GB review sample to AS SSD’s 1GB sequential read and write test, for example, the BX500 returned a read speed of 488MB/s and a write speed of 481MB/s.

The former is perhaps a bit lower than expected given Crucial’s claim of 540MB/s, but it’s still 5% faster than the WD Green, and just 7% slower than Crucial’s BX300 and 5% slower than the MX500. The BX500’s sequential write speed, on the other hand, was pretty much neck-and-neck with the BX300 (1% faster), and only a teensy bit behind the MX500 (3% slower). Compared to the WD Green, however, it’s in a class of its own. There’s a reason WD don’t put the Green’s sequential write speeds on the box, as I recorded a result of just 53MB/s, which makes the BX500 a whopping 807% faster. 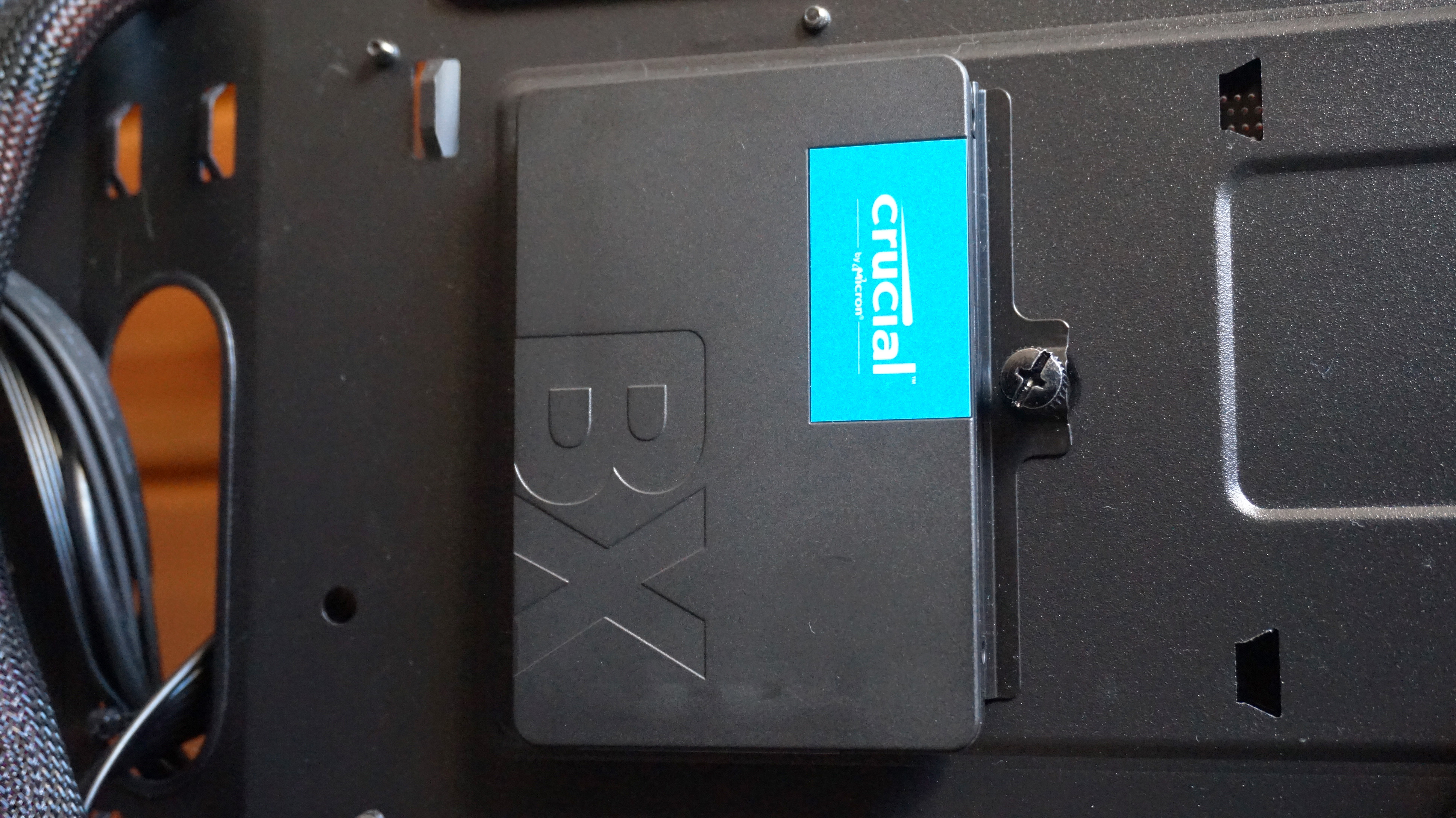 That’s an impressive set of results for such a cheap drive, but ultimately sequential speeds are only half the story. After all, it’s pretty rare that an SSD will read and write files in nice, neat blocks one after the other. Instead, it’s much more common for SSDs to read and write files randomly all over the shop, even if they look like they’re in the same location in Windows Explorer.

As such, random speeds are a much better indication of how responsive it will feel day to day, and it’s here where the BX500 falls down slightly – although it’s still a heck of a lot better than the WD Green. In AS SSD’s random test, which reads and writes 1GB’s worth of tiny 4K chunks of data all over the SSD, the BX500 returned a read speed of just 16MB/s and a write speed of 25MB/s. That’s 41% and 66% slower than the BX300, and 56% and 65% slower the MX500, which is a little disappointing given how close they all were in the sequential test.

Still, in some ways that’s to be expected. After all, the BX300 and MX500 are both more expensive than the BX500 and generally reinforce that age-old rule of ‘you get what you pay for’. The more important thing to consider is how it performs compared to its equally cheap competition, the WD Green, and in this sense, the BX500 is hands down the superior drive. Not only was its write speed an impressive 78% faster than the WD Green, but its read speed showed an increase of 300%, making the BX500 by far the better buy. 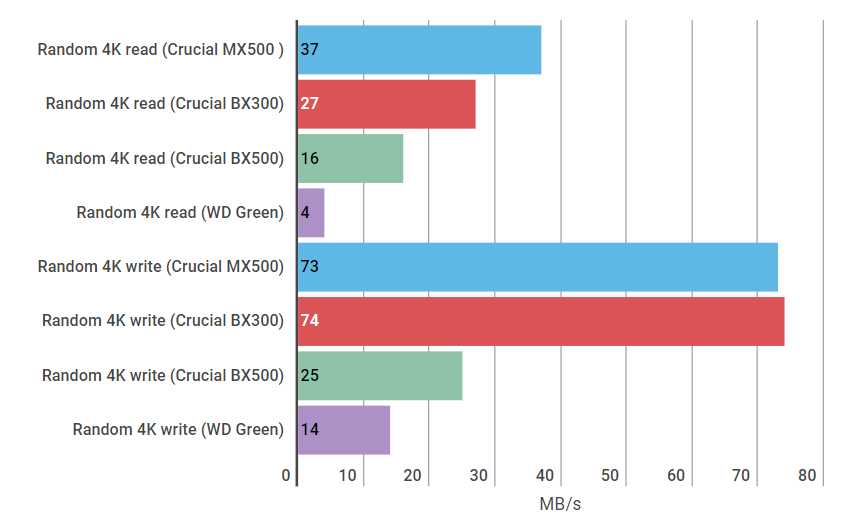 The Crucial BX500’s random read speed puts up a good fight against its more expensive siblings, but its write speed leaves something to be desired.

This firmly puts the WD Green out of the running as far as I’m concerned, and I’d be perfectly happy to recommend the BX500 to anyone looking to get the best performance out of their SSD for the least amount of money. The only real question remaining is whether you should consider the BX500 over Crucial’s BX300 or MX500, the former of which is my current SSD recommendation for installing Windows on while the latter is my best gaming SSD runner-up after Samsung’s 860 Evo.

In its 240GB and 480GB forms, I’d say it’s definitely worth considering if you’re looking to keep costs to an absolute minimum. While its read speeds aren’t too far behind the BX300 and MX500, you do get a bit stung when it comes to write speed, which may not be worth the extra £10-15 / $12-20 you’ll end up saving. As a small 120GB drive for simply installing Windows on, the BX300 also continues to make a compelling case for spending just that little bit extra, especially in the US where it’s just $6 more. If I had to recommend an SSD for a budget-conscious PC builder, the BX500 would certainly be up there, but if you’ve got the extra cash you’ll probably thank yourself later for splashing out on its nippier siblings.