As £70 / $69 gaming mice go, the MSI Clutch GM60 is arguably one of the most adaptable mice I’ve seen in a while. It’s ambidextrous for starters, making it a good pick for right and left-handed PC peeps alike, but you also get not one, but two pairs of magnetic side covers, an extra USB cable (one braided, one rubber) and an additional top cover. All right, the latter is possibly a slight misfire in that it doesn’t actually change the overall height of the GM60, but the rest bring a welcome touch of flexibility to this eight-buttoned gaming mouse that helps go a long way in justifying its premium price.

It is, however, weirdly flat. Despite measuring a sizable 130mm long, 65mm wide and weighing a hefty 170g, the highest point of the Clutch GM60 stands just 39mm off the ground. From there, it’s a steady decline down to a positively titchy 12mm or so, making the whole thing feel a bit like a pancake. Does its deflated shape make for best gaming mouse material? Let’s find out.

Due to its slightly strange dimensions, the Clutch GM60 perhaps isn’t the best choice for those of you who, like me, favour a lazy-style palm grip. Putting my entire hand on the GM60 felt quite unnatural for everyday use, and it had the odd effect of making my second and third finger feel almost too far back on the main right and left click – which was only made worse when I tried out my back-up ‘fingertip’ style grip in an attempt to make my palm feel a bit more comfortable. It’s something you could probably get used to after a while, but personally I prefer a slightly more full-bodied mouse that fills out more of my palm. 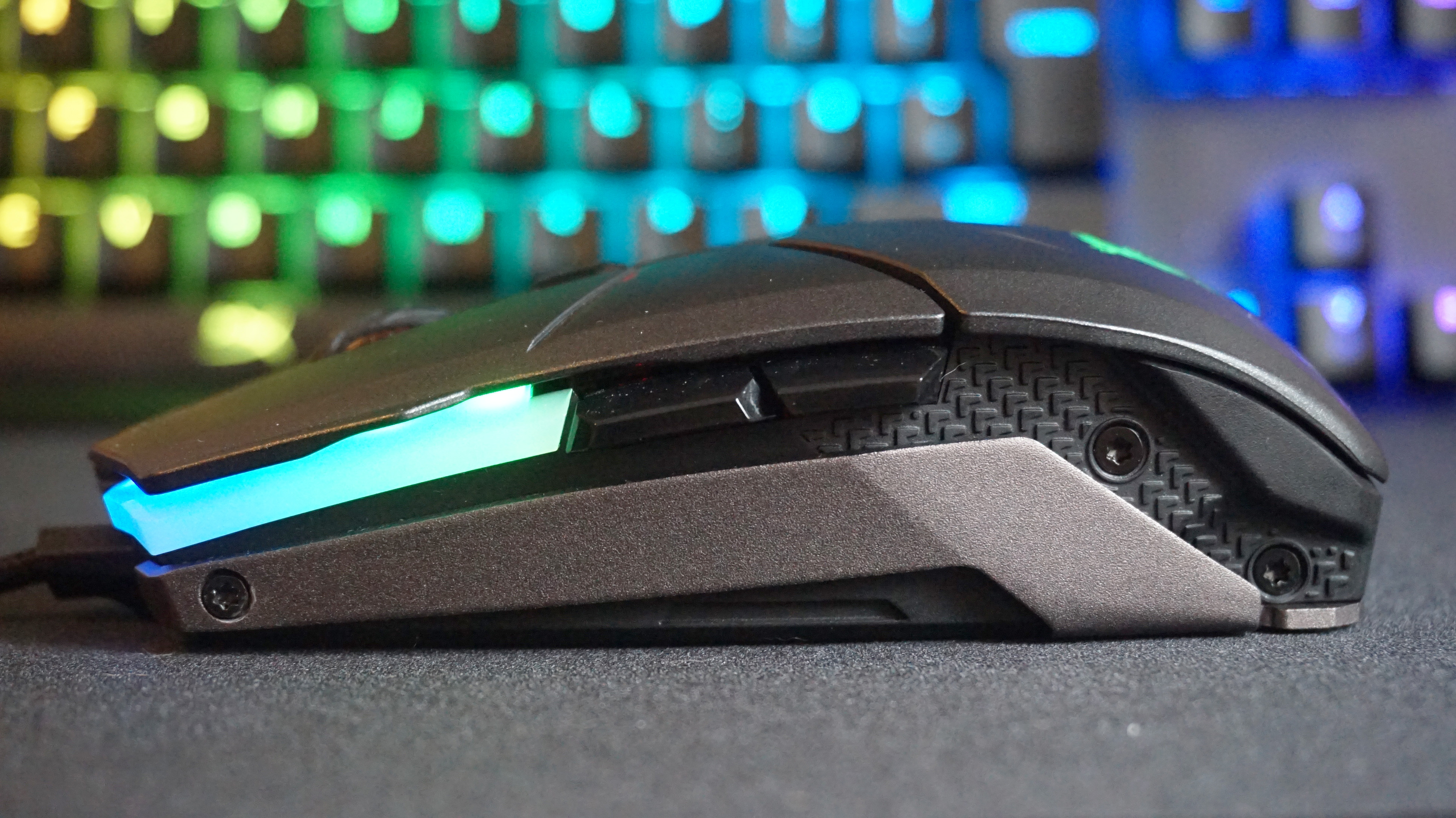 You could theoretically choose to not use either pair of side grips on the GM60, but I wouldn’t recommend it, even if it does make the side buttons easier to find

As such, this is definitely a mouse for those of you who prefer the so-called ‘claw’ grip, which sees you arching your fingers in a much more bent-over fashion and moving your palm up to the very rear of the mouse. Out of the three main grips, this definitely seemed to be the most natural fit for the GM60, so it’s worth bearing that in mind if you’re thinking of picking it up. My feeble fingers aren’t built for sustaining this kind of pose for long periods of time, so the GM60 quickly became quite tiring to use both as an everyday mouse and while playing games. It’s manageable for non-claw fans, but there are certainly much easier mice out there available for the same kind of money.

I would also recommend attaching either one or two of its four, easily-swappable magnetic side grips, as with them the GM60’s pair of right and left side buttons felt very knobbly on the thumb and little finger – something I can see becoming an irritation over extended use without them. It’s nice to have this much flexibility in your choice of side grips straight out of the box, though, and their patterned texture makes using the mouse a lot more comfortable on a daily basis. Personally, I preferred the slightly stubbier side grip combo but I do appreciate having the option of switching it up for an even more flared out pair of side grips, or even mixing and matching. Whatever degree you like resting your digits on wings of plastic, the GM60’s got you covered.

That said, attaching the side grips does mean that both its right and left-handed pairs of side buttons do become a little easier to accidentally gloss over when you’re in the heat of the moment. It’s not like you can’t reach them – indeed, I found I could press both buttons nearest my thumb with very little effort – but the fact they sit in a little alcove between the side grip and top cover meant that, more often than not, my thumb landed on the hard edge above them instead of on the buttons themselves. 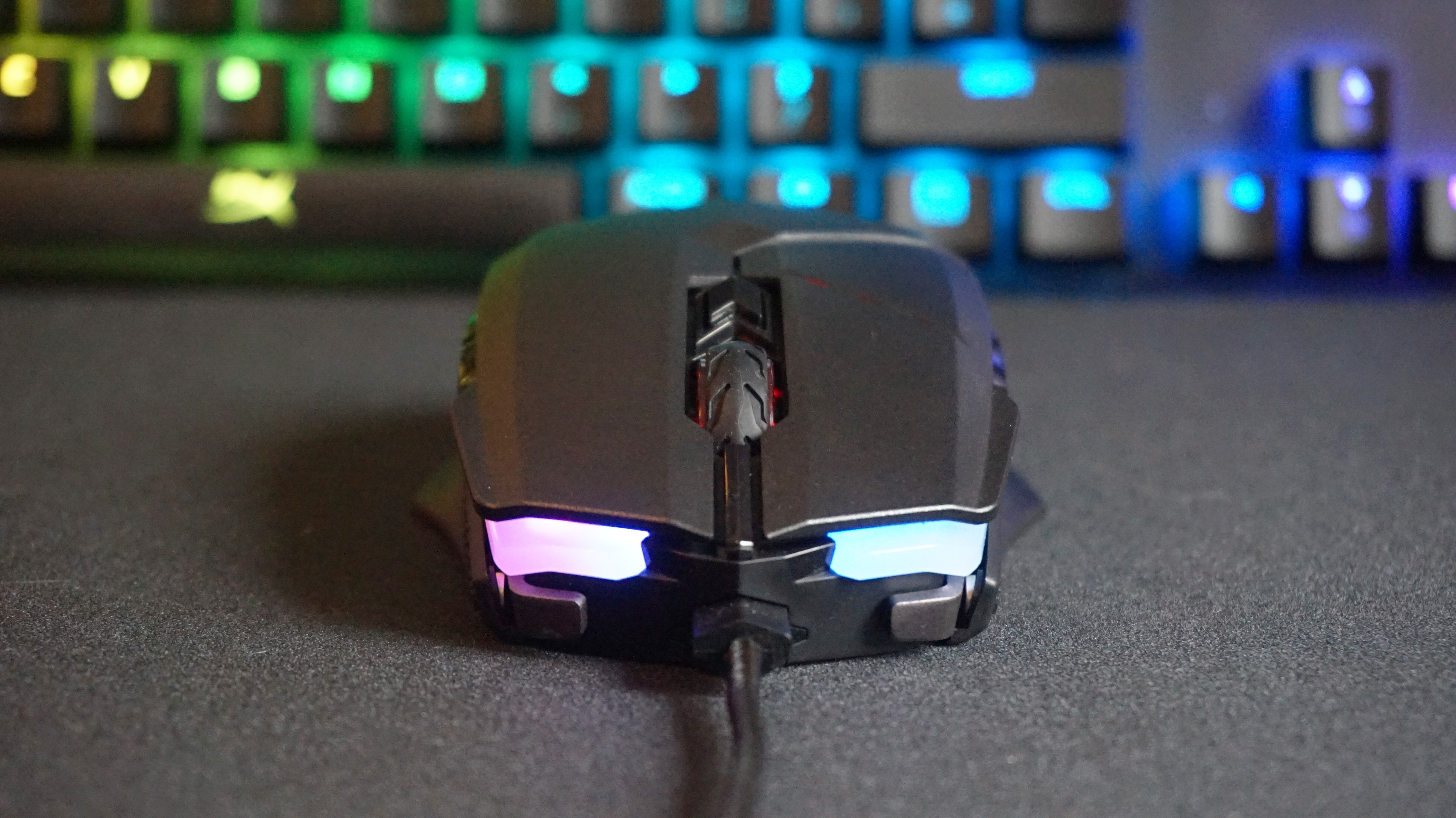 I attempted to rectify this problem by simply resting my thumb on the buttons as opposed to the side grip, but this just added another level of fatigue to the mix. Again, it’s nothing you probably couldn’t learn to deal with over time, but it does make the Clutch GM60 trickier to get to grips with straight out of the box.

Thankfully, the central DPI (or sensitivity) button was much less problematic. There are four sensible speed presets available by default – handily indicated by three red LED lights just off to the left – but download MSI’s Gaming Centre software and you can change these to whatever you like. Available in increments of 100, the GM60’s DPI ranges goes from a deathly-slow 100 DPI all the way up to an oddly specific 10,800 – which is more than enough for even the twitchiest PC players on the planet as far as I’m concerned, as I can rarely keep up with anything over 3000 DPI.

Of course, should the central DPI button prove too difficult to use when you’re mid-game, you could always use the Gaming Centre to reassign that button to one of the side buttons. There are multiple functions available here, including traditional mouse buttons, customisable keyboard functions, media keys and macros, or you can also use them to cycle up and down through your DPI speeds or change to one of the GM60’s five available profiles. I was a little disappointed there weren’t more DPI functions available – such as the on-the-fly DPI option you get with Razer’s Synapse software on the Naga Trinity, for example – but the rest are all fairly typical of other gaming mice options out there. 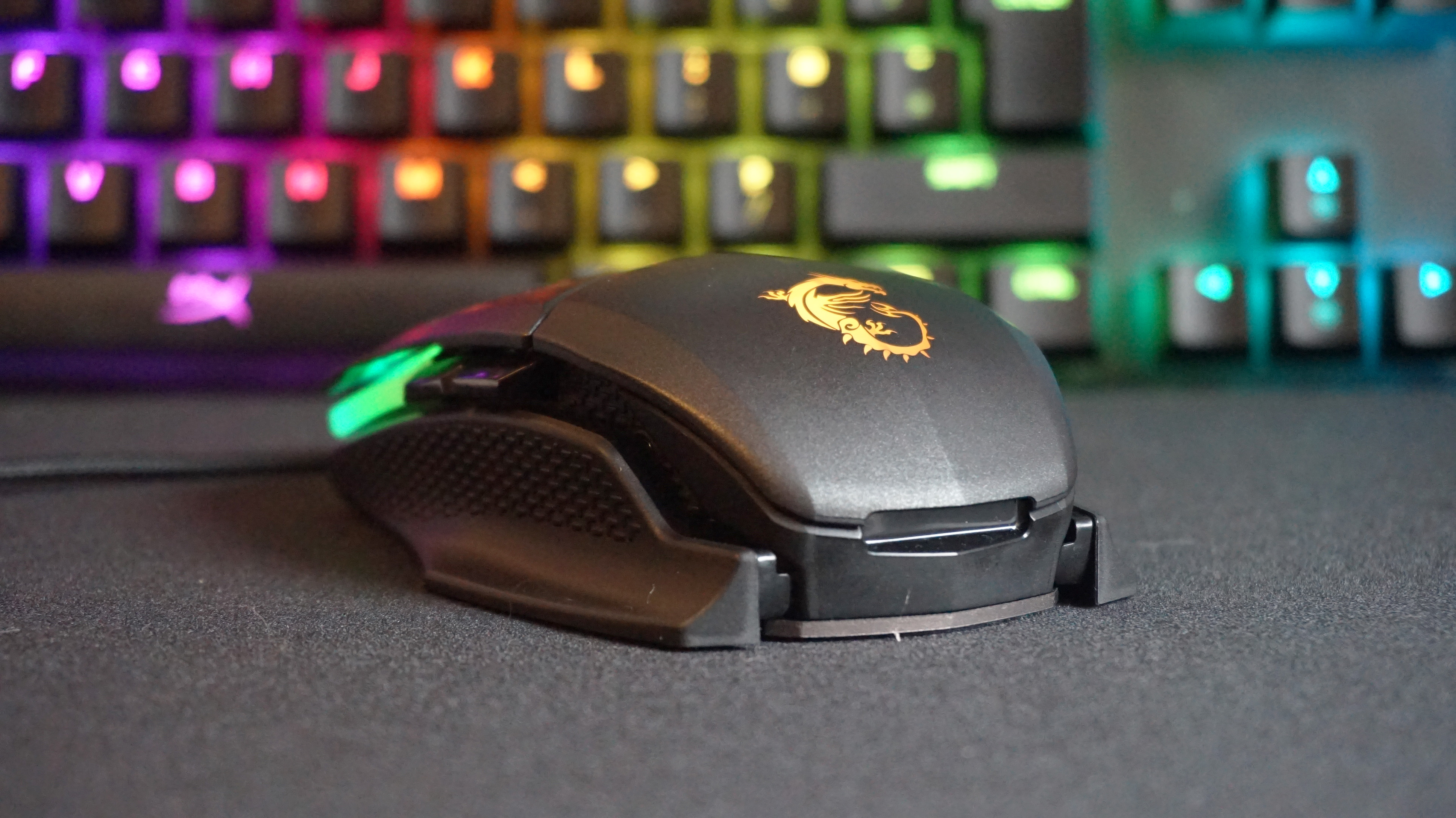 Less typical is the ability to change the GM60’s polling rate (how often the mouse communicates with your PC, the higher the number indicating the faster the communication) up to a ludicrous 3000Hz. Most mice only have a maximum polling rate of 1000Hz, which is perfectly acceptable in my books and something I’ve certainly never felt was lacking in any way, but perhaps the esporters among us may be able to tell the difference. I certainly couldn’t when I tried it out for myself, but then I’m also old and decrepit.

Being able to change the speed of your double click left me equally bemused. Things seemed to double click just as fast when it was set to low or high in Gaming Centre, but again this may be something felt more keenly by MOBA and MMO players as opposed to me. One thing I did appreciate was the ability to change the speed of your scrolling, which really did make a difference when I tried it at both ends of its sliding scale.

To complete the picture, you’ve also got controls for lift-off distance and angle-snapping, which I found were both perfectly fine in their default position, as well as RGB controls to personalise the side bar, MSI dragon logo and DPI indicator strips. 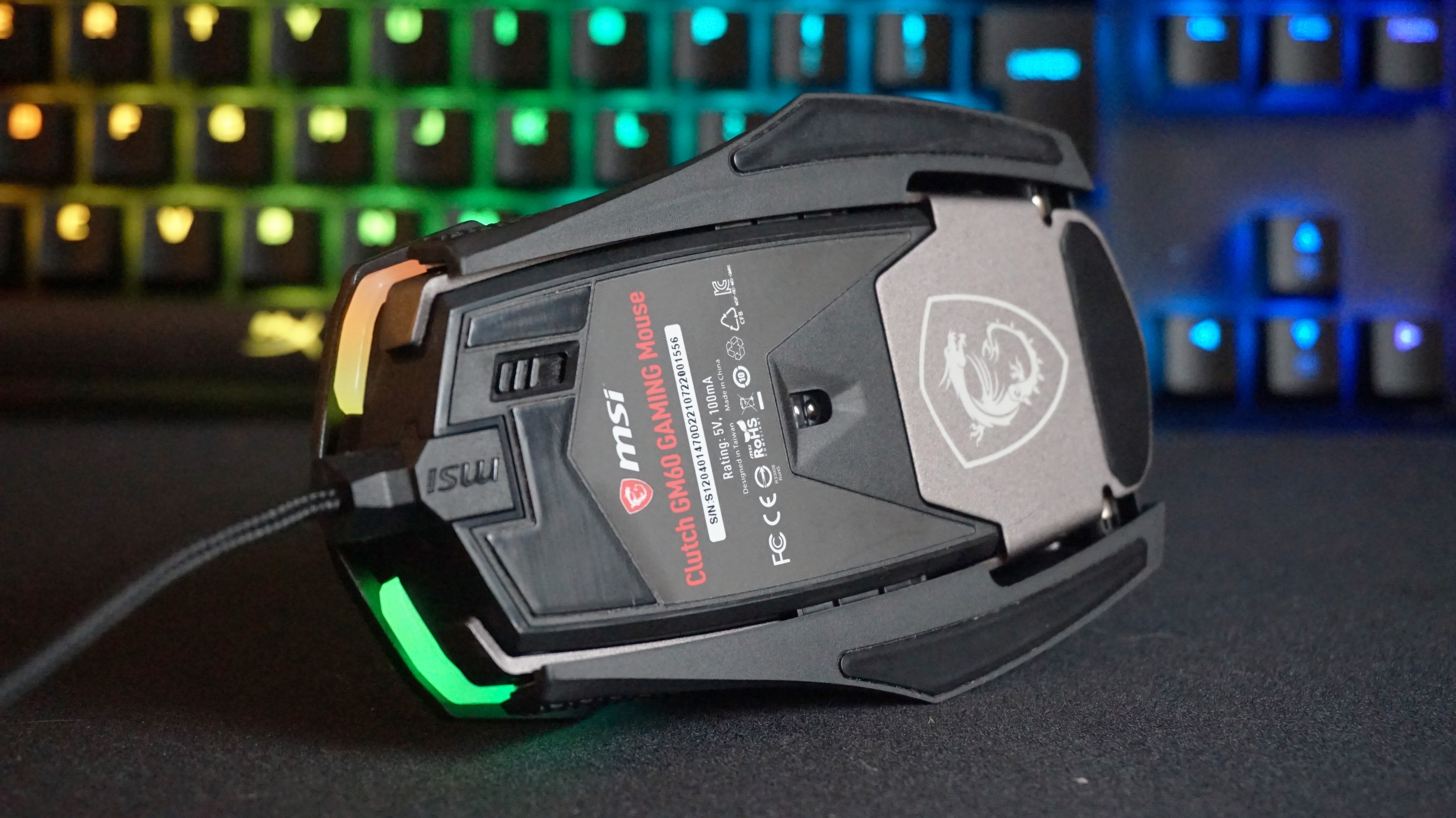 The MSI Clutch GM60 certainly gives you plenty of options, then, but its unique shape and occasionally tricky-to-hit side buttons means it’s also a mouse you’re going to spend a lot of time with before you can make the most of it. For me, that’s just a little bit too much faff for my liking, especially when I can use the similarly-priced Asus ROG Gladius II (or the even cheaper and almost equally adaptable £50 / $50 Logitech G502) straight out of the box. Still, if you’re a fan of the claw grip and want a high-end ambidextrous mouse that offers lots of flexibility, the MSI Clutch GM60 may be worth a punt.