When AMD launched their Vega-infused Ryzen 3 2200G and Ryzen 5 2400G processors earlier in the year, I was left mighty impressed. Here were two relatively cheap CPUs that could sort of play games at decent enough settings at 1920×1080 via their integrated graphics chips without forcing you to spend hundreds of pounds / dollars on a dedicated GPU – a feat made all the more enticing at the time by the then astronomical prices of even the cheapest bestest best graphics cards.

GPU prices have, thankfully, calmed down a bit since then, but even now they remain a considerable expense for those looking to build a PC as cheaply as possible – whether it’s for you, your kids, younger siblings or even your parents. With the right processor, you can save yourself a heck of a lot of money – so today I’m going to take a look at AMD’s newest and cheapest Vega-fied CPU, the £50 / $60 Athlon 200GE, to see how it holds up against its £90 / $100 Ryzen sibling, the 2200G.

But first, some specs. Taking aim primarily at Intel’s Pentium CPUs, the Athlon 200GE is a dual-core chip clocked at 3.2GHz. It also has a tiddly TDP (thermal design power) of just 35W, making it very energy efficient and cheap to run, but its secret weapon is its three Vega compute units, which give it its game-playing chops.

Now, despite sharing the same name as AMD’s 4K-capable Radeon RX Vega 64 and Radeon RX Vega 56 graphics cards, this incarnation of AMD’s Vega graphics is far more modest in its ambitions. Indeed, even AMD have only ever talked about the Athlon 200GE in terms of playing casual / competitive games on Low to Medium settings at 1280×720 rather than 1920×1080 like its Ryzen-based siblings, but that’s still pretty impressive for something that only costs you £50 / $60. You don’t even have to factor in any extra money for a cooler, either, as the Athlon 200GE comes with one in the box (with a pre-applied layer of thermal paste, no less), allowing you to slot it into any existing AM4 motherboard and get going straight away. 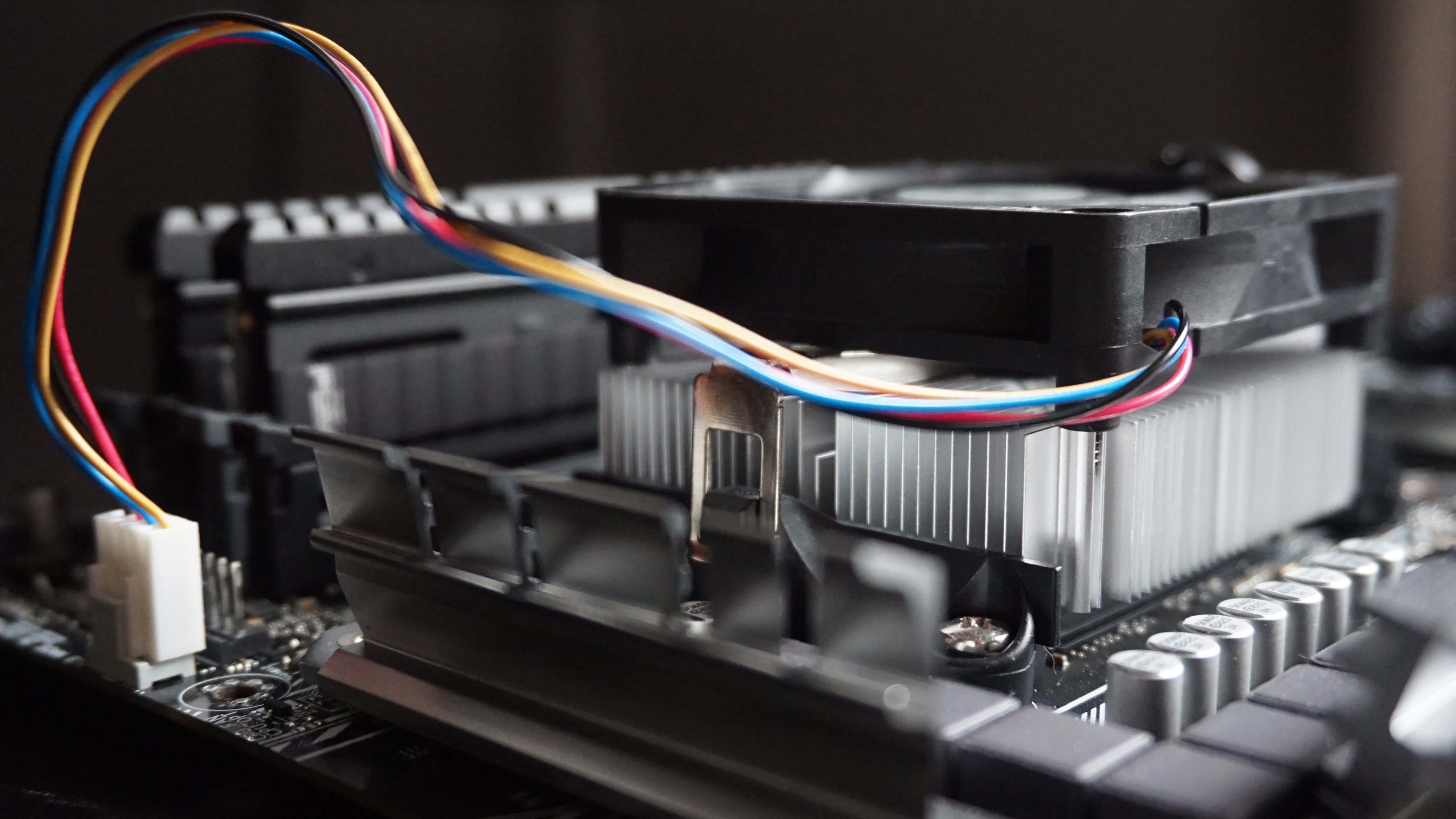 The Athlon 200GE comes with a basic AMD cooler in the box.

To test the Athlon 200GE, I stuck it in an Asus Prime X370-Pro motherboard along with 16GB of Crucial Ballistix Elite DDR4 RAM. Admittedly, that’s probably more RAM than most budget builders are probably looking to include in a PC of this calibre (8GB will probably do you just fine for the type of games you’ll likely be playing with the Athlon 200GE), but in the interests of fairness against other CPUs I’ve tested with 16GB of RAM, I’ve kept the amount the same here in order to maintain parity with everything else.

Indeed, as an everyday CPU, the Athlon 200GE performed admirably. In Geekbench 4, for instance, its single core score of 3205 was only 20% slower than the Ryzen 3 2200G, and just 6% slower than last year’s regular, non-Vega Ryzen 5 1400. Naturally, having just two cores to its name instead of four like its Ryzen cousins means the Athlon 200GE’s multicore performance isn’t nearly as impressive – coming in 51% slower than both the 2200G and Ryzen 5 1400 – but I found it still had more than enough zip for browsing the web and doing the odd bit of light photo-editing in Paint.net.

As a gaming CPU, however, the Athlon 200GE’s three Vega compute units often had a tough time maintaining a steady frame rate – at least when it came to 3D games. I was never expecting to be able to play something like Final Fantasy XV or Assassin’s Creed Odyssey on it, for example, but even some of today’s better-optimised games were clearly a bit too much for it. 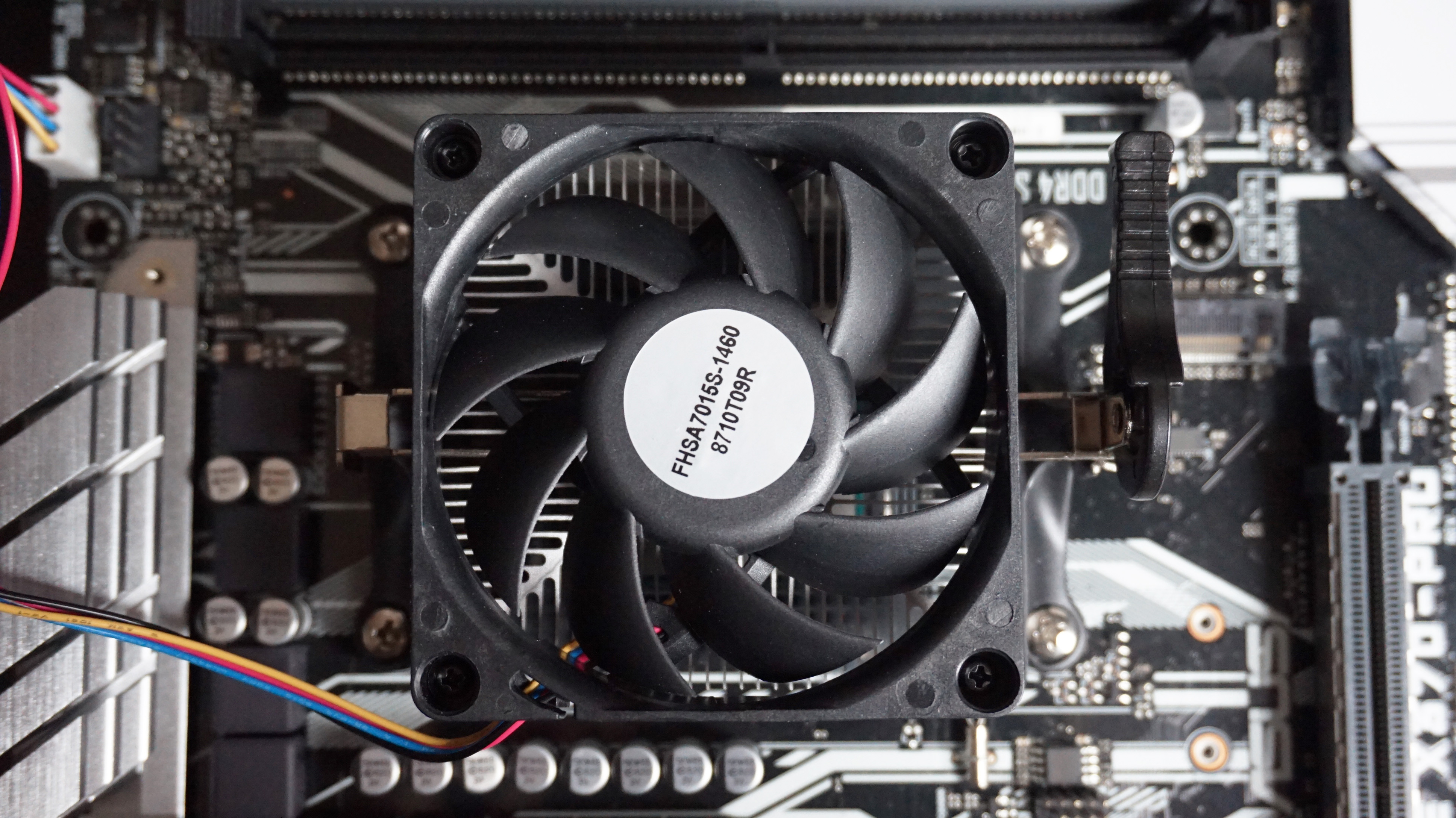 In Hitman, for instance, I saw an average of 31fps in the game’s internal benchmark on Low at 1280×720, while Doom barely managed 25fps on the same settings. Similarly, Wolfenstein II: The New Colossus kept bombarding me with messages saying I’d run out of dedicated video memory and that I would therefore have a worse experience as a result, even though it, too, tended to hover around the 30fps mark on its lowest possible settings at 720p. The Witcher III, meanwhile, was simply unplayable on Low at 720p, the frame rate chugging along at just 16fps.

Compare these results to the eight-Vega-unit-equipped Ryzen 3 2200G, which was able to hit 60fps in Hitman, The Witcher III and Wolfenstein on Low (the first two at 720p, the latter at 1080p), and the difference is quite startling. Yes, the 2200G also struggled with Doom, but for some, that extra £35 / $45 may well be worth the extra expense.

However, if all you want is something to play older 3D games on, the Athlon 200GE should still be up to the task of running things smoothly. While I only managed to get around 30-40fps with Civilization VI and chilled out space station explorer Tacoma on Low at 1366×768 and 720p respectively, the sprawling realm of Skyrim didn’t start dipping below 60fps until I put it on Low at 1920×1080 (and even then it continued to be pretty stable between 45-60fps for the duration of play). As such, those after a higher fidelity Skyrim experience at 720p should have no trouble here whatsoever. 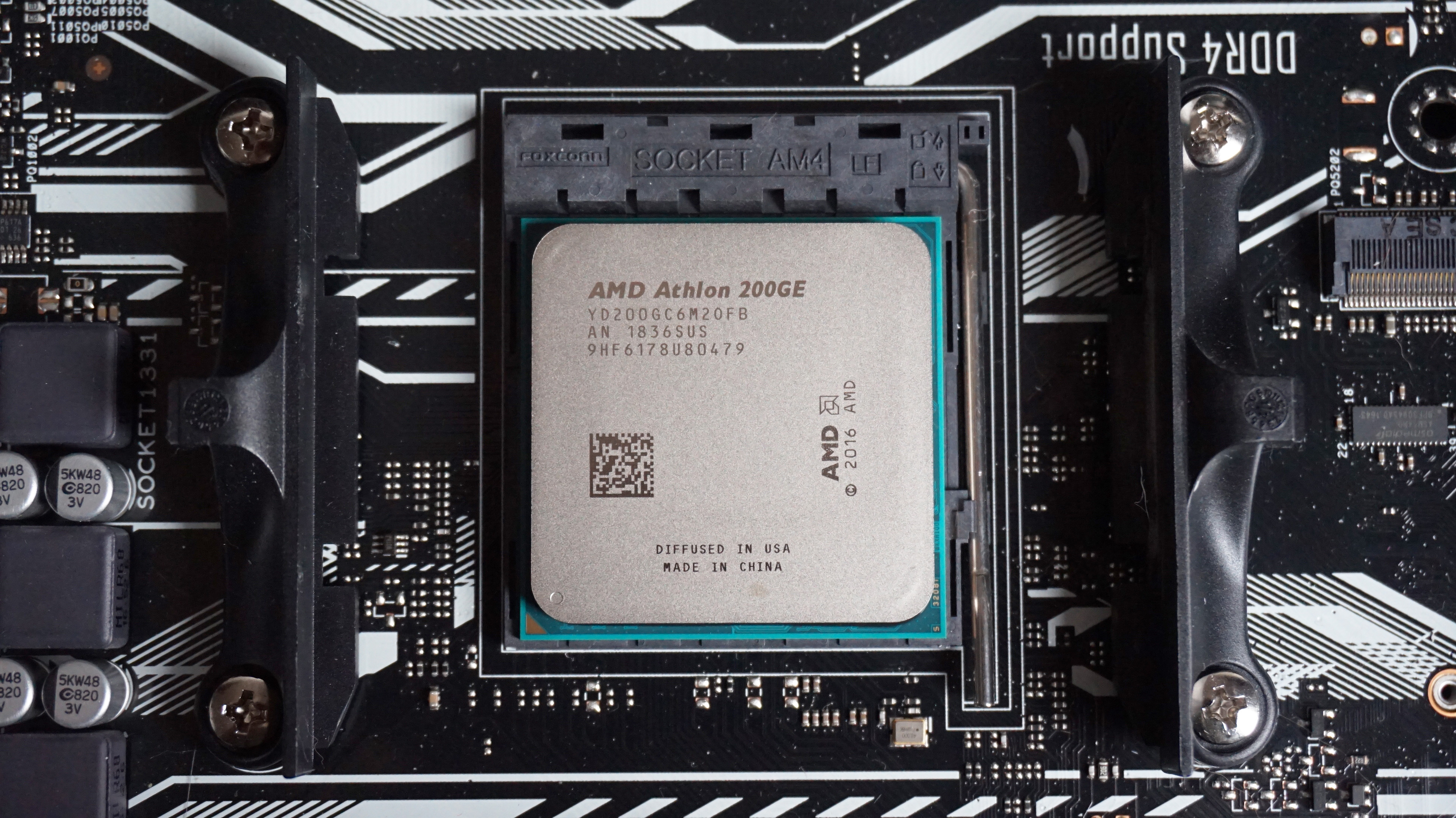 Similarly, 2D games are an absolute breeze for the Athlon 200GE, as crowded incarceration sim Prison Architect and the fast-paced dungeon-crawler-cum-shopkeep’em-up Moonlighter both ran beautifully at 1920×1080 on their fixed graphics settings, and I was even able to get a bit of 2560×1440 going as well with only a couple of minor setting tweaks. If you’re into your indie games, the Athlon 200GE should manage handsomely.

What’s more, if you’re thinking of putting this in a PC for your kids, you’ll be pleased to know that not only can the Athlon 200GE capably handle Fortnite on Low at 1920×1080, reaching well in excess of 60fps most of the time, but you can even get a playable 30-35fps on Medium at that resolution as well. No graphics card required.

In short, the AMD Athlon 200GE is really quite an impressive little processor when it comes down to it, even if its 3D gaming chops aren’t quite as beefy as its mildly more expensive Ryzen 3 2200G sibling. Personally, I’d be tempted to spend the extra £35 / $45 if your budget can stretch to it, as you’ll not only get a faster CPU that’s better at multi-tasking for everyday jobs, but one that will also deliver faster frame rates while playing games at higher resolutions.

Still, provided your gaming diet largely consists of undemanding indie games or 3D ones from five or six years ago, the Athlon 200GE shows that 720p to 1080p gaming is possible on just a £50 / $60 chip. It might not look particularly pretty at times, but if you’re after something cheap and cheerful that will keep the kids and parents happy, the Athlon 200GE comes recommended.