Release: Out now
On: Windows
From: Battle.net
For: £50

Call Of Duty: Black Ops 4 reminds of an ugly, angry man who’s trying to sell me guns. It’s not that I don’t want to buy those guns, I just wish the man didn’t have to yell so hard.

My favourite flavour of Cod is still original. Free For All, ideally.

I sprint down a side-street, shotgun a chap while bumsliding towards him and then blast someone else as they hop around a corner. An obnoxious jingle assaults my ears at the same time as my character shouts something nasty and a parade of medals elbow their way onto my screen, and I say “good grief” out loud.

But it is good grief, you know? Thinking about it makes me want to play it. Playing it makes me do this.

I got a ‘nosebreaker’ there, which you can see is every bit as gristly as it sounds.

But let’s pan back. Cod Blops (my caps lock finger itches) is the 16th Call Of Duty game. It’s set in a war-torn future, doesn’t have a singleplayer campaign, and chops its multiplayer up into three parts. There are also tutorials peppered with questionable cutscenes, but mostly they’re just overwrought explanations for kit that’s point and shoot. Or zip.

So: we’ve got a buffet of familiar multiplayer modes, a novel-for-Cod-but-very-familiar-outside-of-that-context battle royale mode, and the latest iteration of co-op wave survival Zombies mode. That’s a lot of familiar modes.

How does future warfare differ from the warfare of last year? Well, the combatants of tomorrow are sporting enough to wear light-up armbands. (It’s worth noting that Sledgehammer Games did Call Of Duty: WW2 rather than Treyarch, though they’re very much shooting at the same target.) 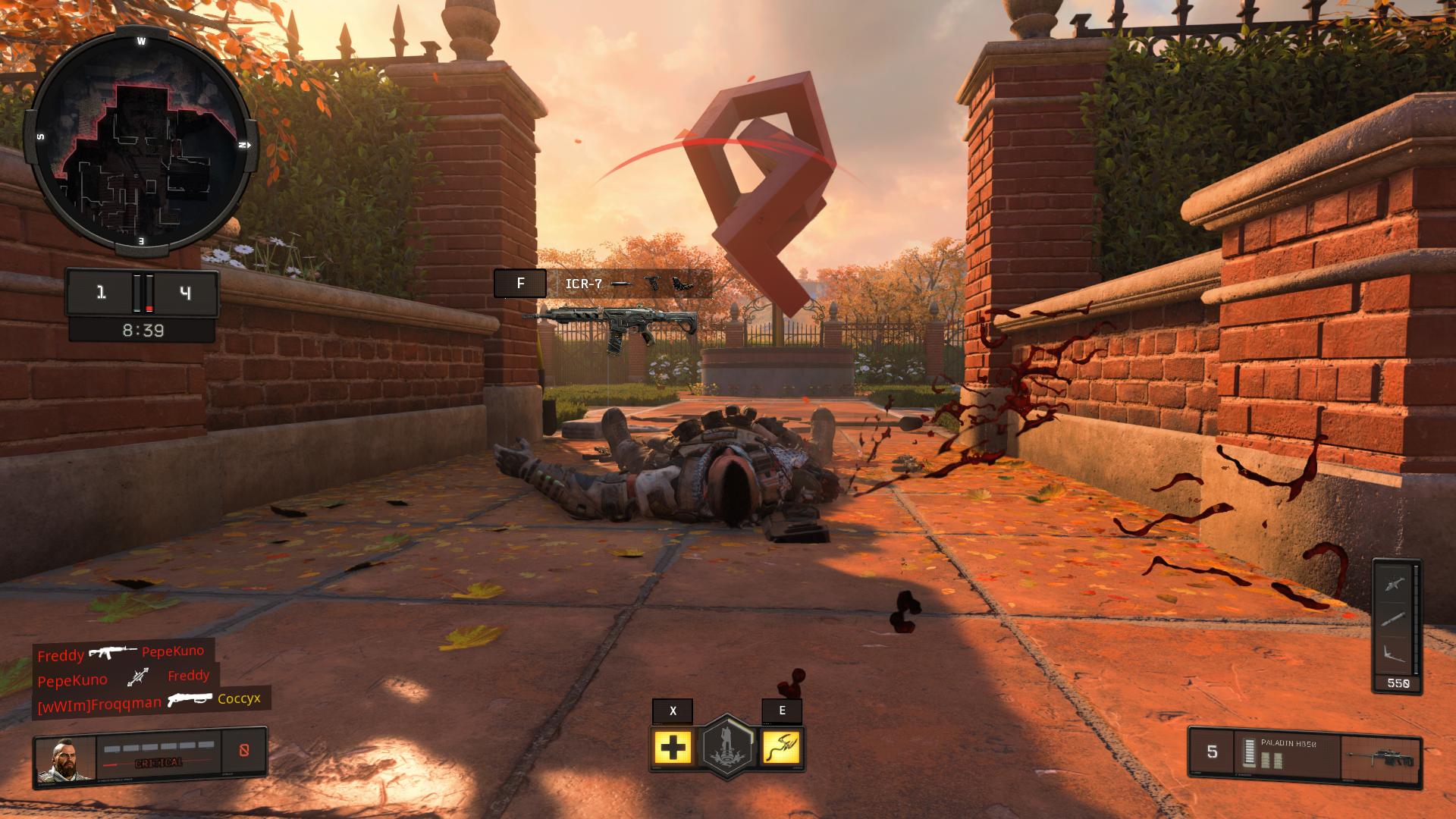 Like Call Of Duty: WW2, Black Ops 4 has killed off regenerating health, this time in favour of getting soldiers to jab themselves with fast-acting medkits. It’s a welcome change from previous Black Ops games, though not actually all that dramatic of one. It does give you something extra to think about, and the occasional smug moment where you heal at just the right point to bounce back from single digit hp.

That core of running, gunning and (most likely) gurning still feels excellent. I’ll linger on the bumslides a little longer, and stress that rounding every corner with a knee-level swoosh is tremendously satisfying. As is one-shotting would-be ambushers when you manage to catch them as you scoot.

On top of the solid shooting, we’ve got gadgets (two a piece) on varying cooldowns – which is where Overwatch says hello. Many of the same ideas cropped up in Blops III, but there wasn’t a grappling hook then so they hardly count. Zipping over people’s heads and landing with a pump and a punch never fails to makes me cheer. 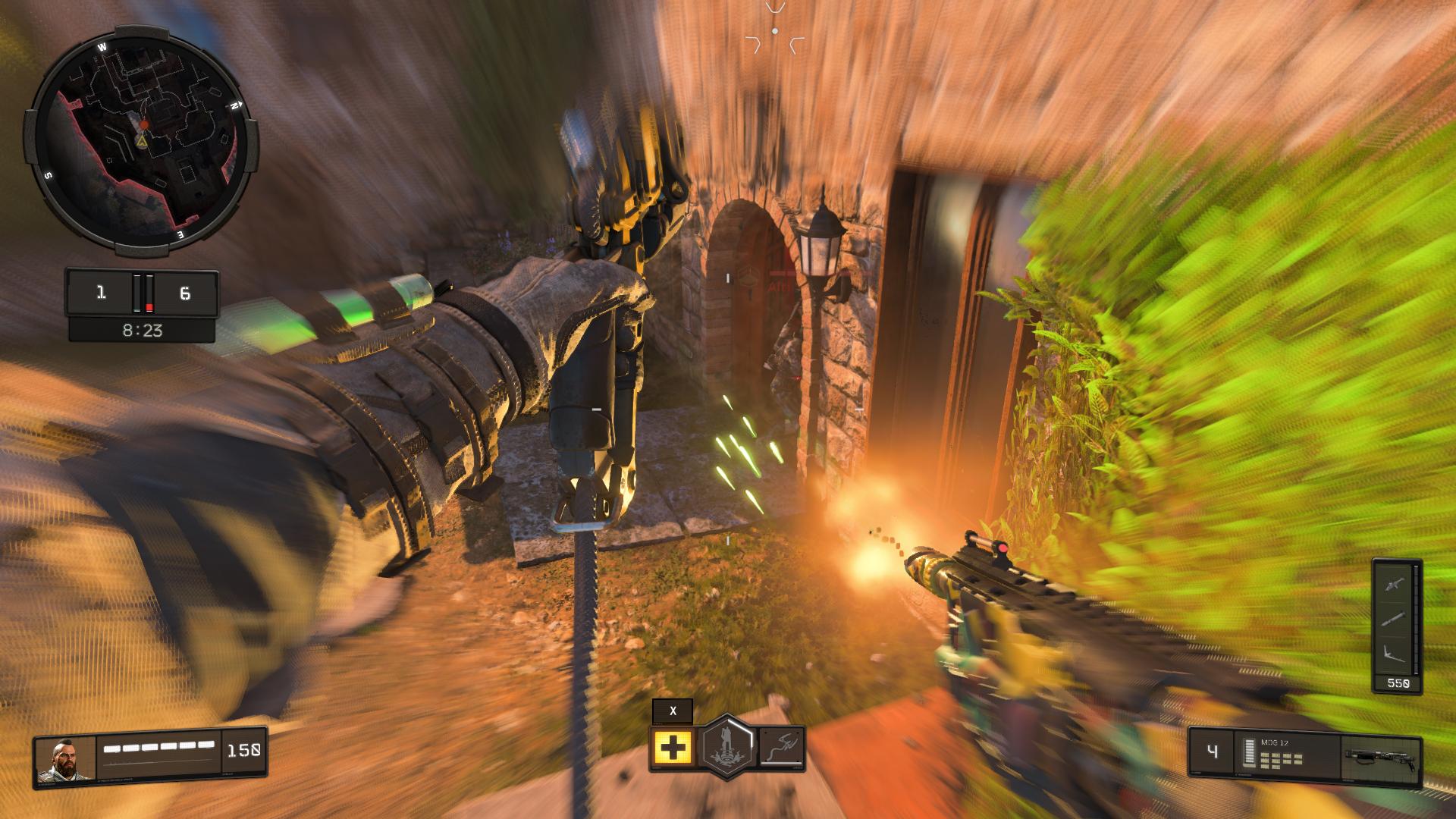 The team-based capture modes are fine, but it’s the ‘everyone for themselves’ rush of Free For All that most appeals to me. Death sits on a hair trigger, so you do too. A quarter of those corners will have enemies behind them, and when you die you’ll come straight on back to run the gauntlet some more. If that was really you wot snuffed it, your feet wouldn’t have had time to touch the ground.

It really is largely about rounding corners. Sometimes with flair, occasionally on fire. Ideally: flinging through the air. 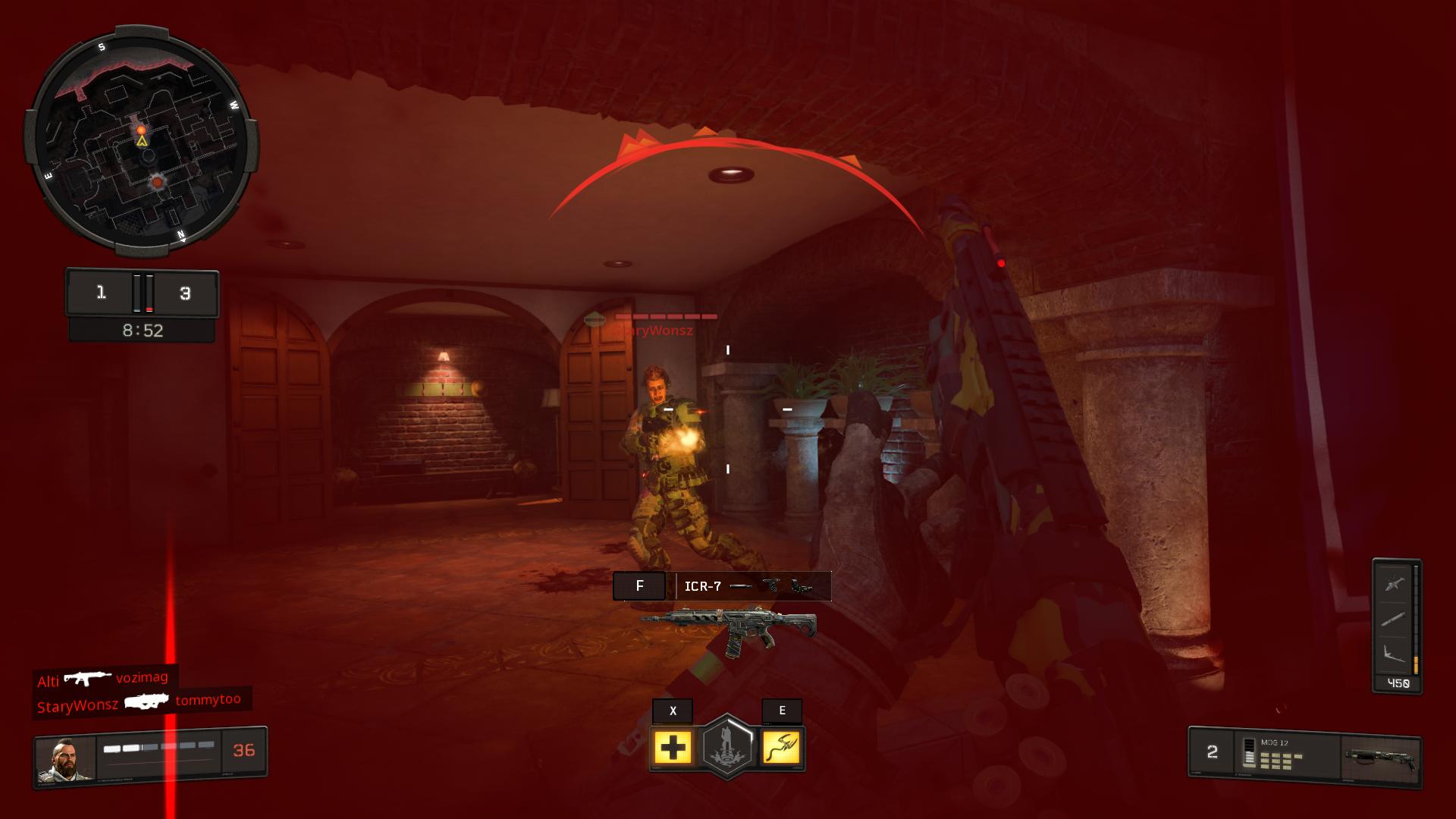 Scorestreaks are still around; i.e being exploded by people whose reward for killing you with guns is to kill you some more with bombs. I think a suitably subdued scorestreak system (oh gosh, sorry for this) could still succeed, but scores of designers over the series’ history have stuck in superfluous super-strong ordinances.

It sucks to be blown up so much, is what I’m saying.

Some refuge can be found in ‘Heist’ mode, where scorestreaks, guns, equipment and upgrades all need to be bought inside each game. It’s what happens when Cod tries to squeeze itself into Counter-Srike: Global Offensive’s coat. Mechanically, it fits! The shooting feels just as good in a 5v5 round-based elimination mode as it does elsewhere. The problem is with the players, who are more ill-suited to that coat than Theresa May is to dancing.

I haven’t had time for many goes at it, but in every game so far my teammates seemed philosophically opposed to reviving me. Cod players aren’t the most cooperative of chappies, as demonstrated by one of my losses being rounded out with a nice bloke informing us we were all “fucking shit”. It’s also of less interest to me because for some reason you can’t buy specialist gadgets like the grappling hook – oh, and they really didn’t need to show a “play of the game” after every round. It’s almost as stop starty as American Football. 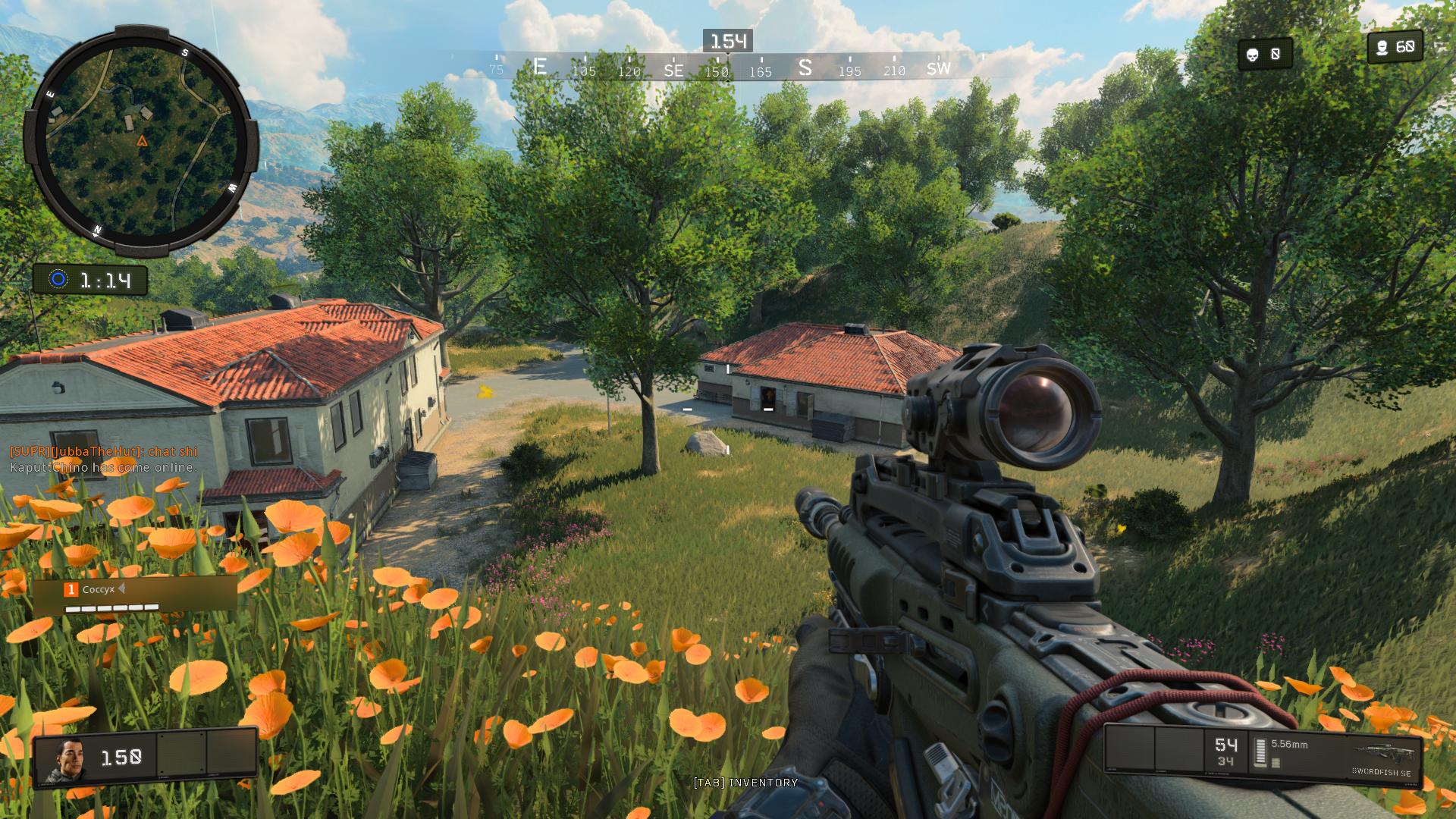 Blackout happens. That’s the battle royale mode’s moniker, for reasons whose existence is less certain than my not caring.

In Blackout, the LED armbands come off. You know the drill: 88 murdermen drop from choppers and have at it until only one remains, all while an enclosing circle of death shrinks the play area. Loot is a little more plentiful than in Plunkbat – I’m rarely lacking for a gun/scope/attachment combo I’m happy with, and I can usually amass a stock of meds and perks.

I’m in two minds about those perks. One of those minds is bigger than the other, and it’s the mind telling me they’re more needless bullshit. Sure, I don’t mind picking up a boost that quietens my footsteps, or provides a heads-up when someone has their sights trained on me. But I sure as hell don’t want to die to other people with those advantages, and I haven’t worked out how Treyarch could only grant superpowers to me.

I also think the one shot rocket launcher is a bit much, and the death screen quotes from people like Aristotle and Bertrand Russell are equal parts surreal and disconcerting. Though they are fun to deadpan to your mates when you lose.

In one game, I wedged myself in a corner such that I’d have a clear view of anyone who left a house. I stayed there for torturous five minutes while someone romped around breaking every window in the damn building, yet never leaving. Even as the zone of death wrapped itself around our throats, he didn’t budge. Agony. Then, I noticed someone further ahead who I had a clean shot on, missed spectacularly, and got killed by him instead. 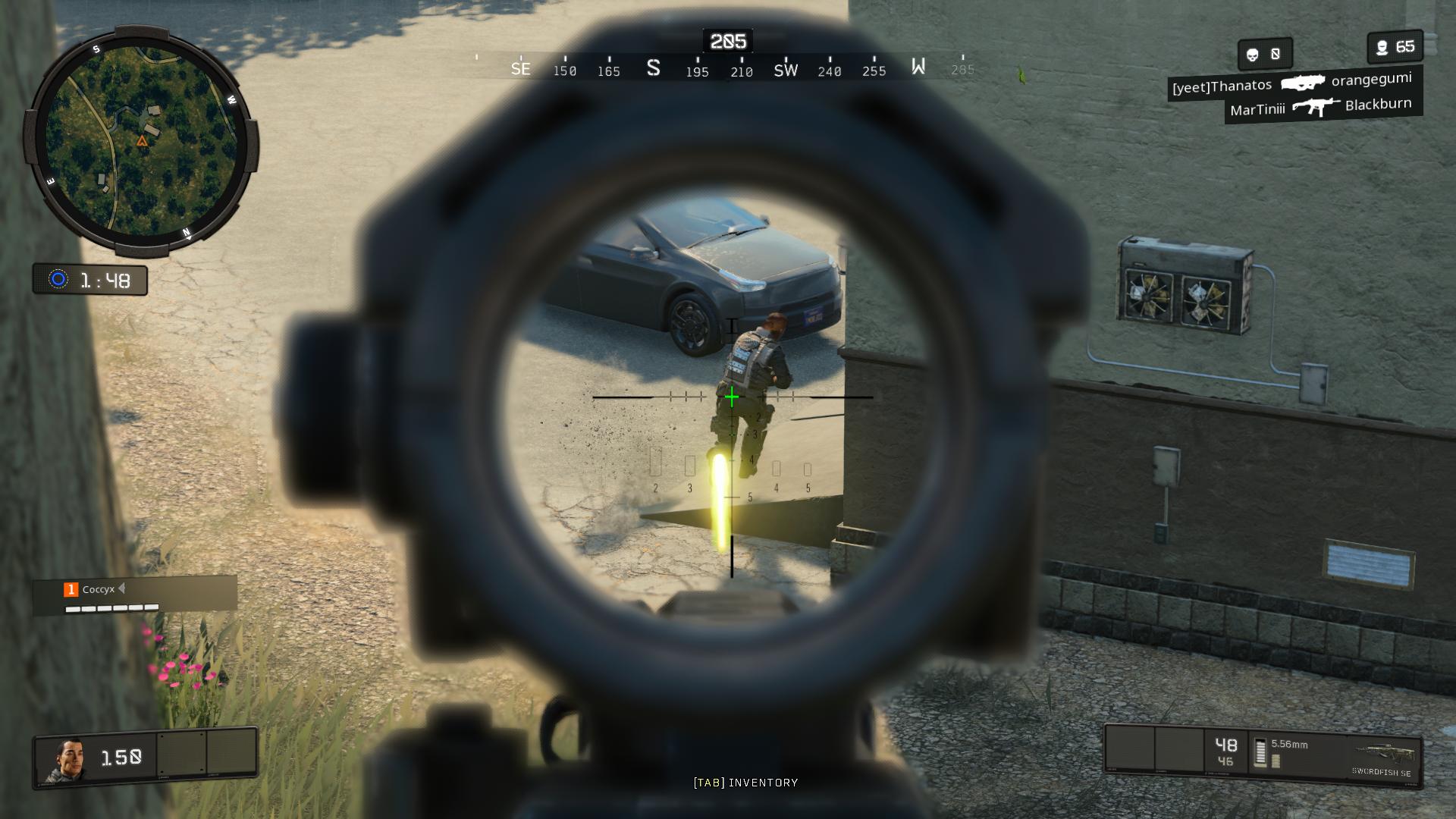 Immediately swapping back to a palate-cleansing Free For All was surprisingly easy – I’d wondered if I might need time to acclimatise when jumping between modes, but nope. It was nowhere near as tense, of course, but it was no less intense. I had more fun overall, but I didn’t have a story.

Blackout plays as if Plunkbat got nudged a tad towards Fortnite’s arcadey sensibilities, and a whole damn mile towards its polish. That territory comes with trade offs. There are no bugs and the shooting is crispier than a Kettle chip, but you can’t lean around corners. The vehicles handle a bit strangely, too, though unless your heart is really wed to banterbusses then that’s more than made up for by the gunfeel. Yuck.

I will say I am a bit burnt out on royales, so it’s hard to give Blackout a fair shake. Still – if you haven’t already hit yourself round the head with too much Plunkbat, I can see it ensnaring you and/or a gaggle of friends just as Plunkbat once did for me.

Oh, except aiming while prone feels awkward and sticky. That’s kind of a small criticism, but also a damning one. Nothing ruins a day like a crosshair not swivelling like it should. 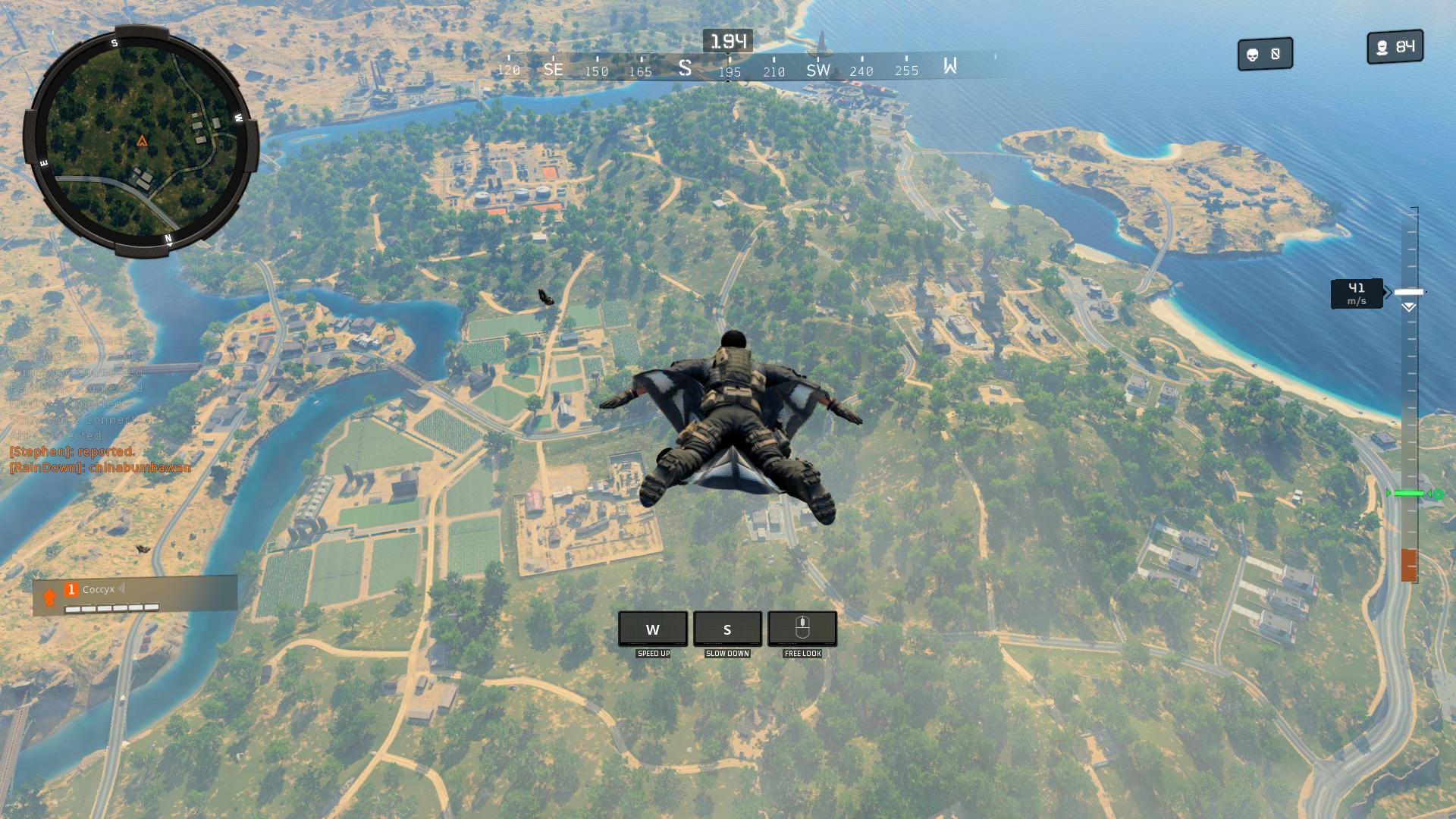 I haven’t talked about Zombies mode yet, and I’m not going to much. It’s a mess of exploding tigers and stuttering framerates, where the interesting zombie types take far too long to appear. Each game involves weathering round after round after round of run o’ the mill zombie, probably while some people who know what they’re doing with magic orbs go about… doing that. I hope that sentence made you as exhausted as I felt playing it.

I’ve never really seen what Zombies mode offered that Killing Floor doesn’t provide far more bountifully, with the possible exception of wackiness. If it ran better I’d recommend maybe checking out one game on each of the maps, but given my performance issues I can only do that halfheartedly. 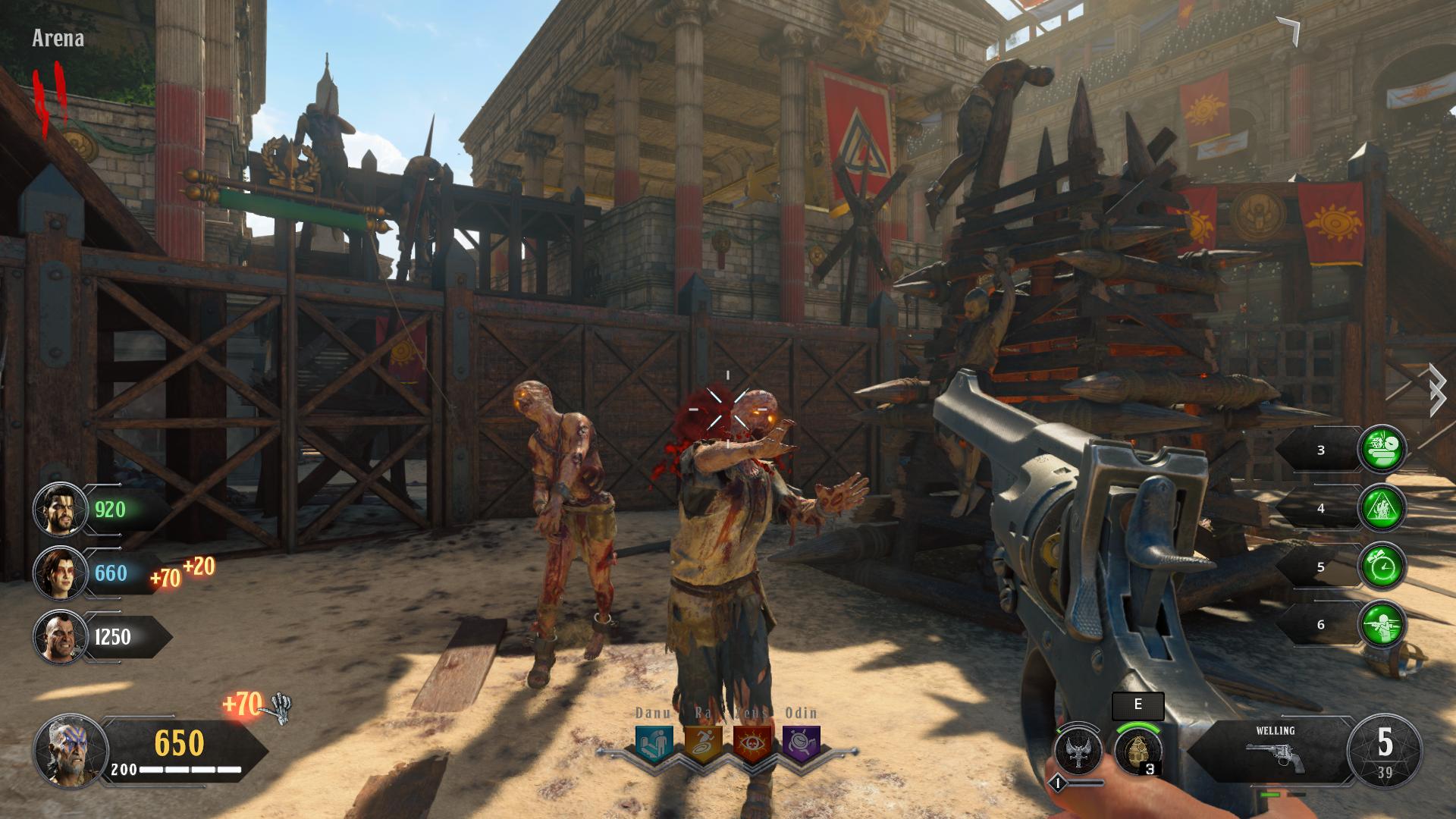 Oh, and it’s been crashing – in all the modes, though I think a patch has fixed most of my problems. Though there was one round where everything froze apart from the sound of some lake birds. I remember thinking that it at least provided a welcome break from the bro-festing grunts. A serene counterpoint to overbearing tacti-cool.

I do find Black Ops 4’s tone genuinely disagreeable. Even so, I can see myself spending a few more evenings toying with this angry man’s guns.

Go on, I will shoot some more people. And could you throw in that grappling hook?