Despite costing an arm, a leg plus a couple of kidneys, Nvidia’s GeForce RTX 2080 Ti has quickly established itself as the best graphics card on the planet. If you’ve ever wanted to play games in 4K at the highest settings without the faff of gaffer-taping two GPUs together via SLI bridges and whatnot, the RTX 2080 Ti is by far and away the best single card solution for 4K perfection chasers. As with any graphics card purchase, however, the big problem facing prospective RTX 2080 Ti owners is which of the many thousands of this particular card is actually the best one to buy?

To help shed a bit of light on the issue, I’ve been pitting a bunch of different RTX 2080 Tis against each other to see which one’s best, including MSI’s GeForce RTX 2080 Ti Duke OC, Zotac’s GeForce RTX 2080 Ti AMP! Edition and Nvidia’s own Founders Edition. Of course, this is still just a small fraction of all the various RTX 2080 Tis out there at the moment, and I’ll do my best to add more cards to this giant graphical showdown when I can. For now, though, it’s a three-horse race between Nvidia, Zotac and MSI. Come and find out how they got on through the medium of some graphs.

But first, some specs. As you’d expect, all three cards come with the same 11GB of GDDR6 memory and 4352 CUDA cores, but the key difference between them (apart from their overall size and various bits of cooling apparatus) is how those cores have been clocked. Nvidia’s reference specification for the RTX 2080 Ti, for instance, has a base clock speed of 1350MHz and a boost clock speed of 1545MHz. All three have stuck with the former, but Nvidia’s Founders Edition pushes the latter up to 1635MHz, while the MSI and Zotac go even further to 1665MHz. 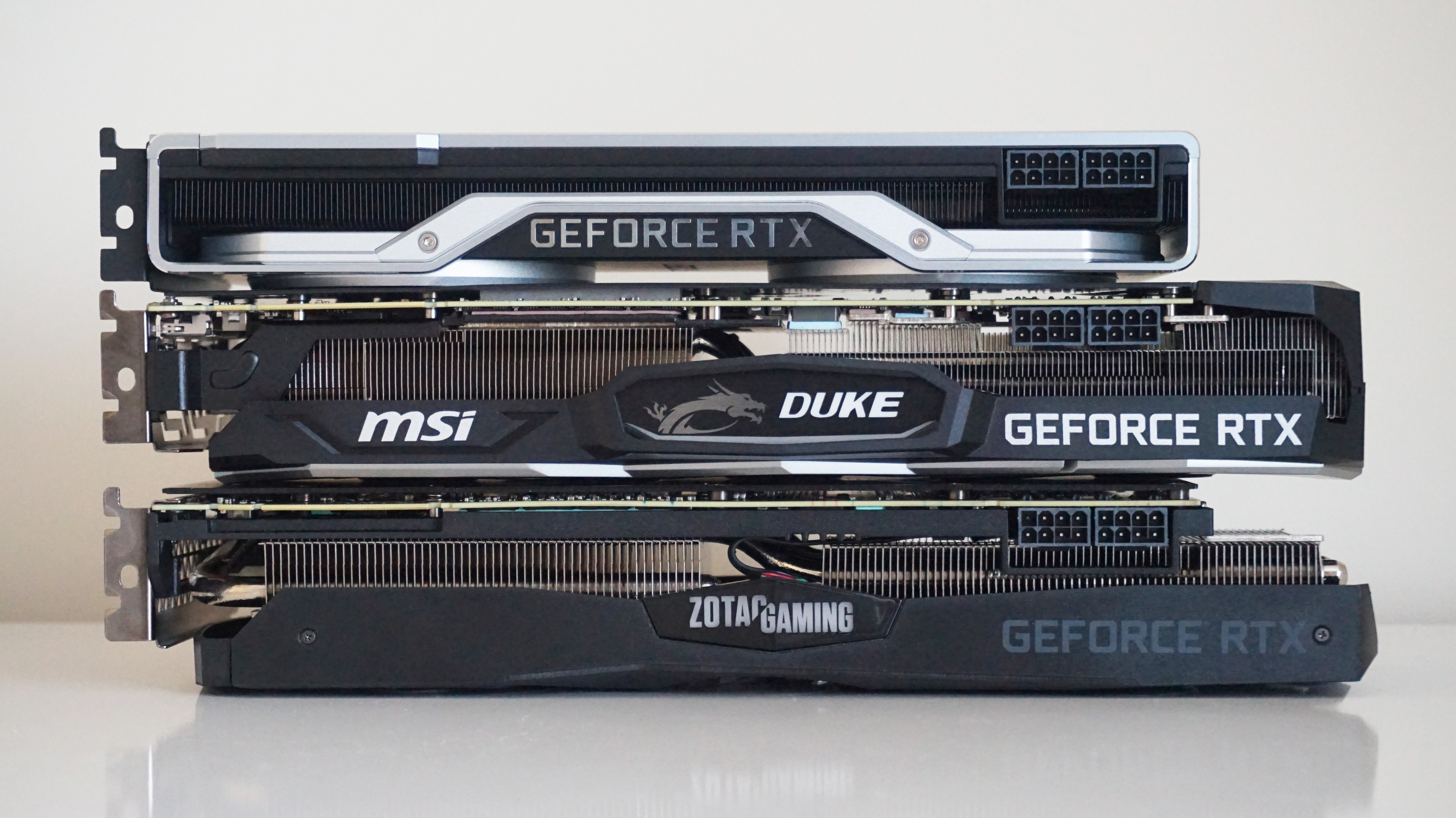 That’s the main reason why so often you’ll see at least £100-200 (if not more) separating the cheapest and most expensive GPUs of any given card type – the faster a card can potentially run, the better performance you’ll theoretically get from it. Cooling also plays a big role in how much cards cost as well. Just like in real life, hot components often equals unhappy components, and unhappy components are much more likely to start throwing a wobbly and become a bit of a bottleneck than those who can keep their cool. As a result, it’s no surprise that MSI and Zotac’s three-fan jobs cost a lot more than Nvidia’s dual-fan edition.

The downside is that both of these things can often make cards more power-hungry than others, but for the purposes of today’s test I’ll be focusing on performance and performance alone. So how does MSI’s £1250 / $1220 (but currently out of stock literally everywhere) Duke OC compare to Zotac’s £1370 / $1500 AMP and Nvidia’s £1099 / $1199 Founders Edition? Behold.

With the aid of Assassin’s Creed Odyssey, Forza Horizon 4, Hitman, Total War: Warhammer II and The Witcher III, I ran my two lots of tests: one with an Intel Core i5-8600K and 16GB of RAM in my PC, and another with Intel’s new Core i9-9900K (a review of which will be available early next week) and the same 16GB of RAM. As you may remember, I had an inkling that my Core i5 was causing some bottleneck problems when I first took a look at the RTX 2080Ti, particularly at lower resolutions, and testing it with the Core i9 confirmed those suspicions were indeed correct, sometimes showing gains of almost 20fps.

That said, I found the actual difference between all three cards was surprisingly small. At 4K using each game’s highest quality settings, Nvidia’s Founders Edition was consistently the faster card of the three when paired with my Core i5 CPU, which is pretty damning for the other two when it costs so much less. Even when Zotac and MSI’s efforts did manage to sneak out in front, the amount you’re actually gaining certainly doesn’t feel like £150-300 / $120-300 worth of extra performance. 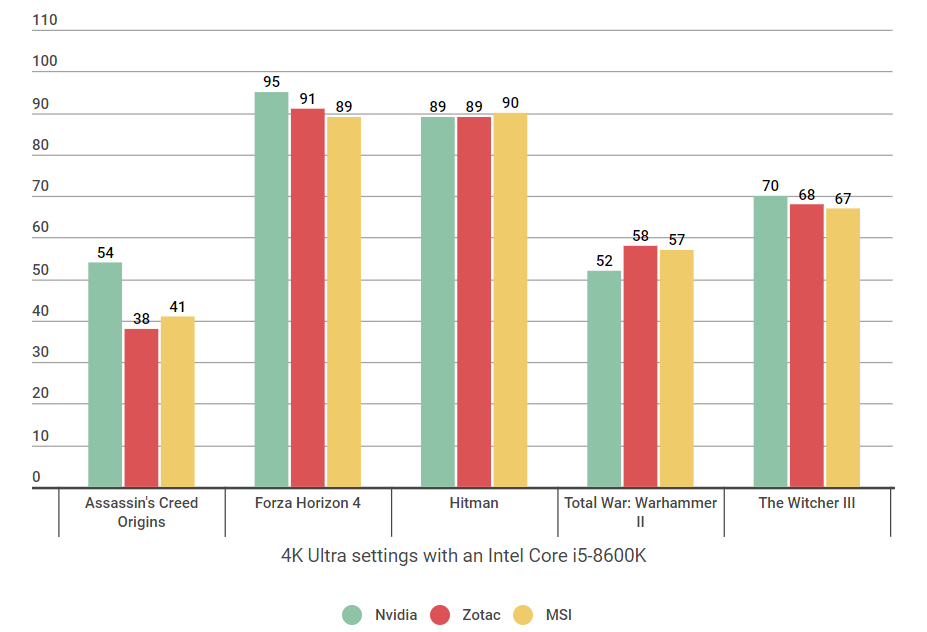 With a Core i5, the difference between all three cards was pretty minimal.

Admittedly, a different picture emerged when I retested each card with the Core i9-9900K. Here, it was Zotac’s AMP! Edition which proved to be the fastest card (except in Assassin’s Creed Odyssey where Nvidia’s version still had the very slight edge), but the point remains that they’re all pretty damn close to each other.

Of course, it’s highly possible that it’s now my motherboard (the admittedly low-down Asus Prime Z370-P) acting as the bottleneck instead of the CPU (and I’ll be re-testing again with one of Intel’s new Z390 chipsets very shortly), but ultimately I’m not convinced a superior motherboard is suddenly going to make one card jump up significantly higher than all the others. 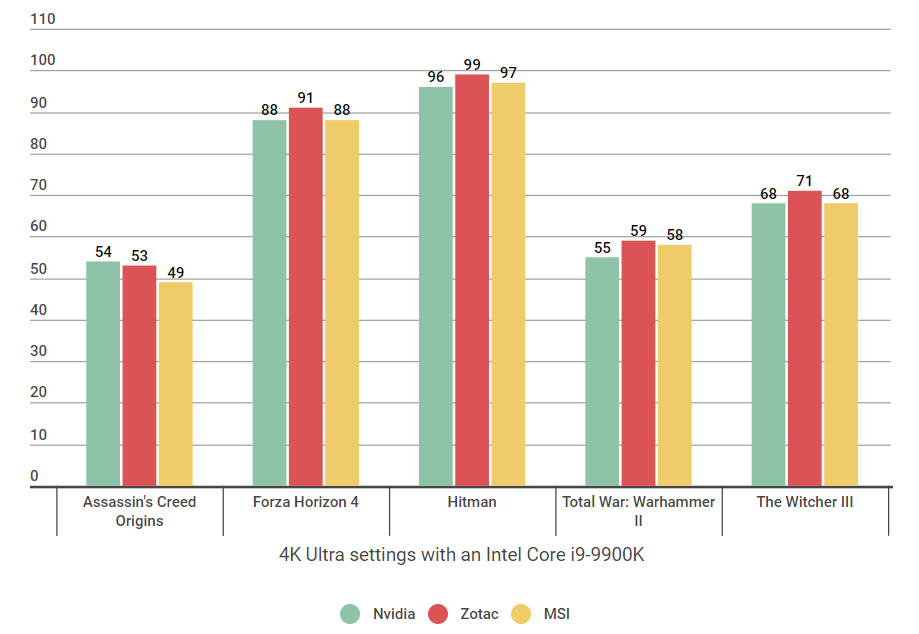 With Intel’s new Core i9, there are definitely some gains to be found, but apart from Assassin’s Creed Odyssey, they’re all pretty tiny.

Things started looking more promising when I dropped the resolution down to 2560×1440. Admittedly, this isn’t really the resolution these cards are targeting, but those with high refresh rate monitors should still get a lot out of them here. As you can see from the results below, all games except Assassin’s Creed Odyssey were pushing well into 90fps and above territory, allowing for high frame rate gaming with absolutely zero compromise on overall quality. 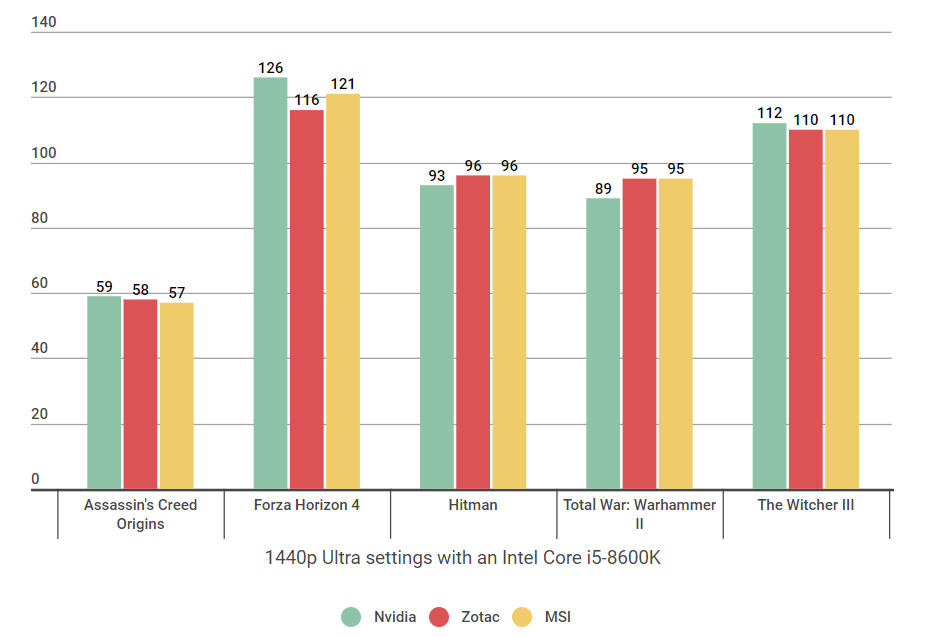 At 1440p, the Core i5 is definitely holding all three cards back compared to their Core i9 results, but there’s still not £200s worth of difference between them all.

Switch over to a Core i9, however, and we start to see some larger gaps beginning to emerge, and not just compared to what I managed with a Core i5. Assassin’s Creed Odyssey shot up in speed at this resolution, as did Hitman and Total War: Warhammer II, proving the Core i5 was definitely holding some of my earlier results back from their true potential.

Once again, though, you’re only really looking at a difference of 5fps across each individual card with this CPU, which to me simply isn’t worth the extra expense. Yes, Zotac’s card proved once more to be the superior card of the three in most cases, but if I were to boot up Forza Horizon 4, for example, I reckon the Nvidia’s 114fps is going to look and feel just as smooth as the Zotac’s 119fps to my frame-addled eye balls, so I might as well save myself £300 / $300 in the process and maybe look into putting it toward a better CPU instead. 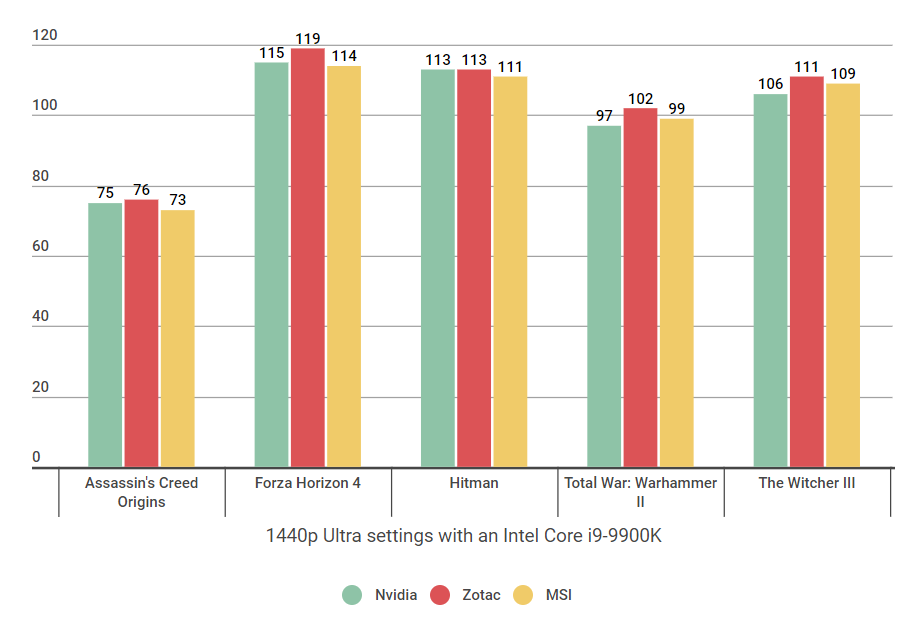 The Core i9 definitely relieves some of the previous bottlenecking I was experiencing at this resolution, but once again the gap between all three cards with this spec is positively minuscule.

It should be apparent by now that there’s really not a whole load of difference between these three RTX 2080Ti cards, but holy moley does it become even more obvious at 1920×1080. Much like I found in my initial RTX 2080Ti review, my 1080p results bore a surprising similarly to the speeds I got at 1440p with my Core i5, particularly in the case of Hitman and Assassin’s Creed Odyssey where all three cards produced practically identical frame rates to each other across both resolutions. There was a little more variation in Forza Horizon 4 and The Witcher III, but ironically it was Nvidia’s card that came out on top, not its more expensive rivals. 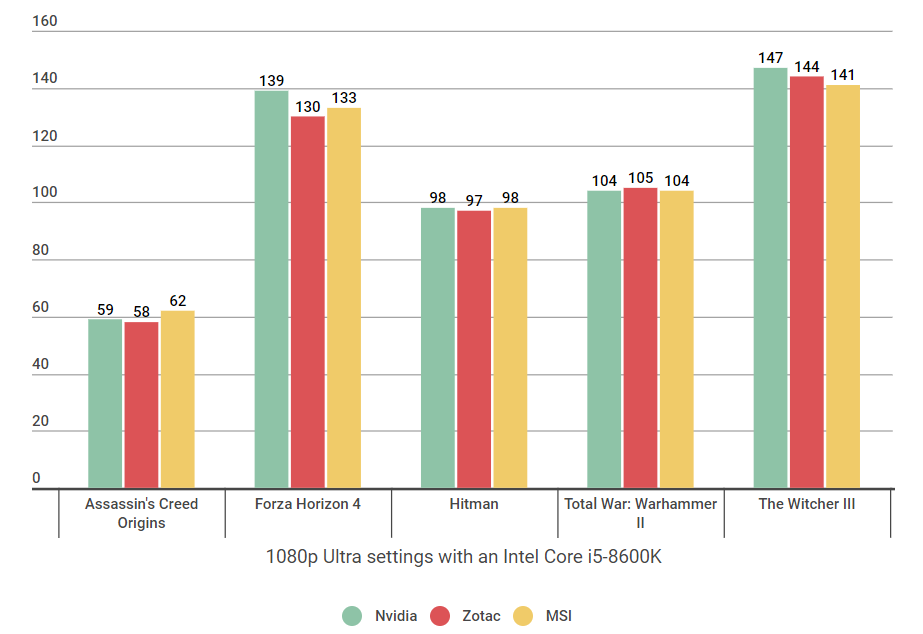 But good gravy, just look at the state of these Core i9 results. As hinted at above, this may well be the fault of my motherboard at this point, but come on. This is just getting silly. 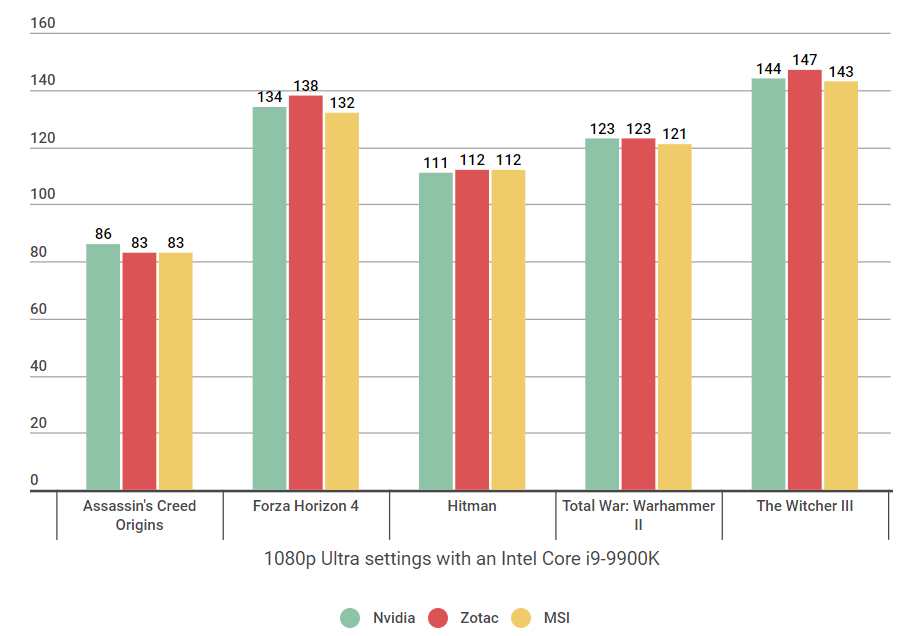 The gaps! They’re even smaller! That’s it. I’m going home.

In conclusion, if you happen to have a spare grand lying around for an RTX 2080Ti, you’re probably going to be just as well catered for with Nvidia’s significantly cheaper Founders Edition than you are with more expensive ones with extra bells and whistles – confirming my long-held belief that, clock speeds and number of fans be damned, the cheapest version of whatever graphics card you’re looking to buy is almost certainly going to provide just as good an experience as one that costs half as much again.

This theory won’t apply to every graphics card, of course, and those with souped up, water-cooled mega rigs will probably scoff at the idea of even attempting to deliver a verdict on such a card with only a piddly Asus Prime Z370-P motherboard to show for it. However, the fact remains that, even with the most premium, high-end PC money can buy, it’s highly likely you’re still looking at only a marginal frame rate gain between cards such as these (which let me remind you again are £300 / $300 apart in price), which to me, just isn’t worth it.

Yes, there will be some people for whom technical excellence is the absolute most important thing on the entire planet, making them feel safe in the knowledge their card is better than everyone else’s. For those after a peerless subjective experience, on the other hand, there are some pretty hefty savings to be had.