Terminals are where the vast majority of the lore is found in any Fallout game, but they can also control turrets and other security systems in any given vault or building. Getting access to some however requires a bit of technical wizardry to hack into the computer terminal. While it hasn’t really changed a lot since Fallout 3, there are a couple of differences with how to improve your hacking abilities. This guide will go through how to upgrade your hacking skill, as well as how to hack terminals.

Those looking for a beginner’s guide to get started with the Fallout 76 beta and indeed the full game when it comes out should have a look at our Fallout 76 guide. 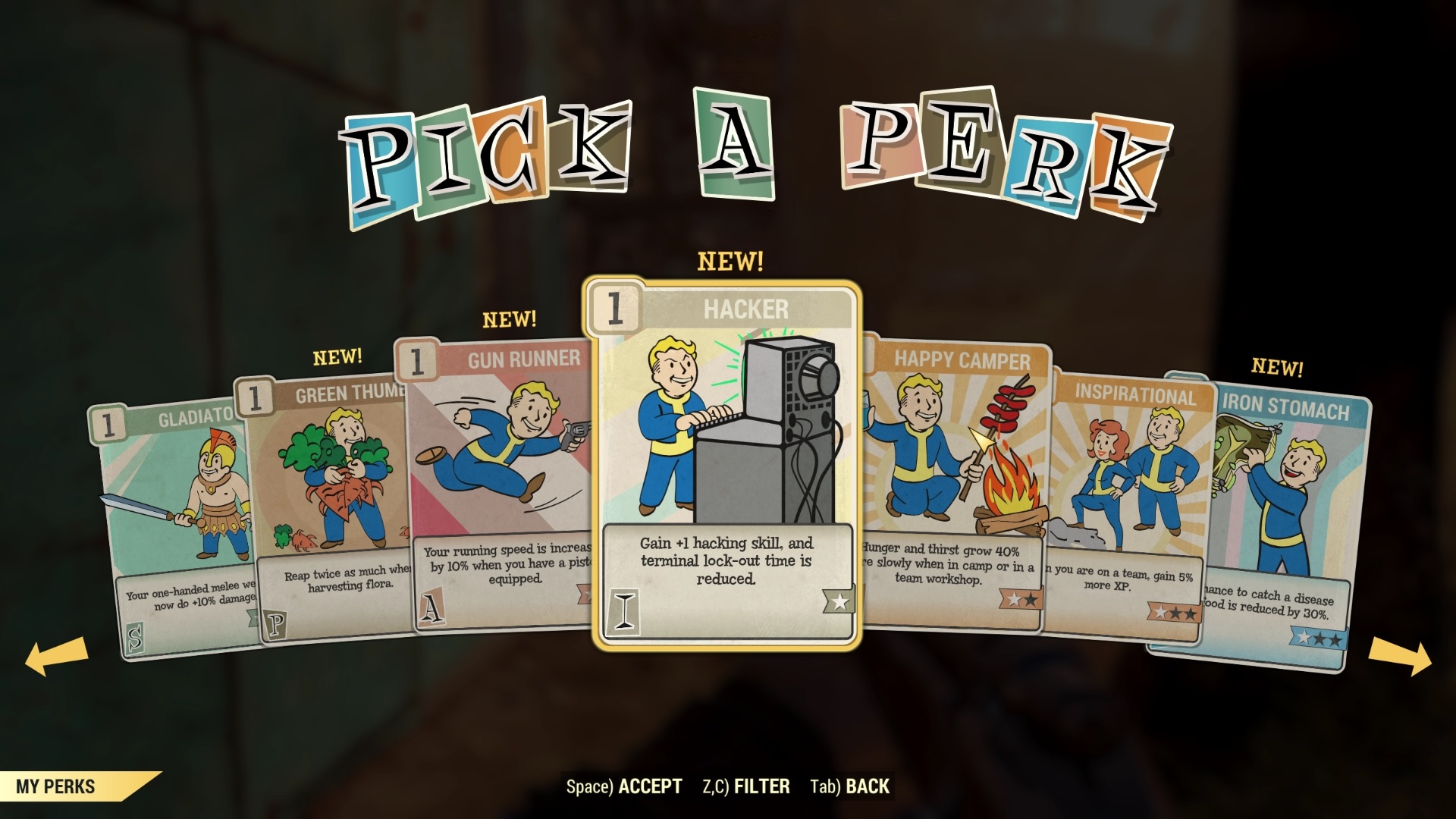 In order to upgrade your skills in hacking, you’ll need each of the three intelligence perk cards associated with improving your hacking abilities; which you can find out more in our Fallout 76 perk cards guide. The perk cards you will need are: Hacker, Expert Hacker, and Master Hacker. These are all cards that improve your skill of hacking by one and you can equip all three to have a maximum hacking skill of three. Each card equipped will also reduce the lockout time for the terminal.

However, there are a few caveats that you should be aware of about these perk cards. All three only have one rank, meaning that you’ll only be able to equip them rather than upgrade their ranks like many other perk cards. This means that should you get a duplicate of the Hacker card, you can’t combine them to make a “Hacker rank 2” card. You also can’t equip more than one of the same type of card to improve the rank as they need to be the individually named cards. Therefore, the only way to improve your hacking abilities is to find one of each of the three perk cards and equip them.

How to hack into terminals

The actual process of hacking into a terminal is apparently the same as the previous Bethesda Fallout games. When you log into a terminal, you’ll be presented with a list of words that all share the same character length and some characters in certain places. There are also some random characters to muddle things up a bit. The idea is to select words to either access the terminal, or see how many letters in the guess were correct.

Let’s say for example that you are hacking a terminal and the word you’re trying to find is “STEEL”. All the other words will be five letters long and some will feature similarly placed letters. You may have four guesses to find the correct word. Your first word that you choose is “RANKS”, which the computer will respond as having a likeness of zero. this means that none of the letters are shared with the correct word. This in turn eliminates the possibility of the word being “MAZES”, “FISTS”, “LANDS”, “TREES”, “GATES” “GEEKS”, “KICKS”, “BASES”, “RULES”, “AREAS”, “SLIPS”, “TEXAS”, and “HOLES”. This leaves you with “ELDER”, “FLASK”, and the correct word “STEEL”.

To continue the example, your second word guess is “ELDER”, which the computer will say has a likeness of one. This wouldn’t eliminate any of the two possibilities as the L is found in “FLASK” and E is found in “STEEL”. Occasionally you may need to guess a word you know is wrong to find the answer, so let’s say you select “TREES” as your third guess. The likeness will be two, which wouldn’t be much help on its own, but by eliminating the rest with our first guess, the only possible answer is “STEEL”.

Should you fail to hack the terminal in the allotted number of guesses, you’ll be locked out of the terminal for a time. This time frame can be reduced by upgrading your hacking skill. With every increase in terminal difficulty, the character count of the terminal will increase by one, so you’ll have to decipher longer words. It also seems that time in the game world no longer stops when you’re hacking, so you may find yourself being attacked by another player or an enemy if you’re not careful.

Here’s something I bet a lot of people might not know unless they’ve had a lot of experience with the Fallout games. You can actually get rid of certain “dud” words by scanning through the characters near the words until you find the characters that are grouped together. In this example, the characters “{ }” are highlighted. Clicking these characters removed one of the incorrect words, but it can also reset the attempts you have to complete the hacking challenge.

Now that you have a start on how hacking works, you may wish to learn more about that other bit of thievery: Lockpicking. You can find out more about the changes that have been implemented in our [FALLOUT 76 LOCKPICKING GUIDE] guide. I briefly mentioned Perk Cards in this guide, but there is a much more detailed explanation as to what the changes are in Fallout 76. Just head to the Fallout 76 perk cards guide to learn more.