I’m glad no one heard me whimpering on my first mission for The Blackout Club. I was by myself at this point, scurrying through an underground labyrinth full of sleepwalkers and foreboding. I tiptoed within inches of their sightless faces, all the while pursued by a being I could only see when I closed my eyes.

Then my friends joined me, and most of that tension was swept away on a tide of grappling hook japes. Cooperative immersive sim horror has its ups and downs.

If a cult with mind-control powers and an inter-dimensional horror in tow set up shop in my town, I’d probably move – but the teenagers of this one have other ideas. Every night, when their parents and neighbours are shambling about to the whim of cultish whispers, the Blackout Club gets to work.

Work takes the form of procedurally generated missions, usually involving snooping. You might start off by breaking into someone’s house and noseying around their bedrooms, recording evidence of crimes most foul before cowering on a bed when the residents come investigating.

That done, your phone will beep again and you’ll be sent down into the underbelly. The underbelly has lovely soft carpets, and less lovely hooded figures intent on grabbing you. Every house has an entrance. Every adult is under their sway. 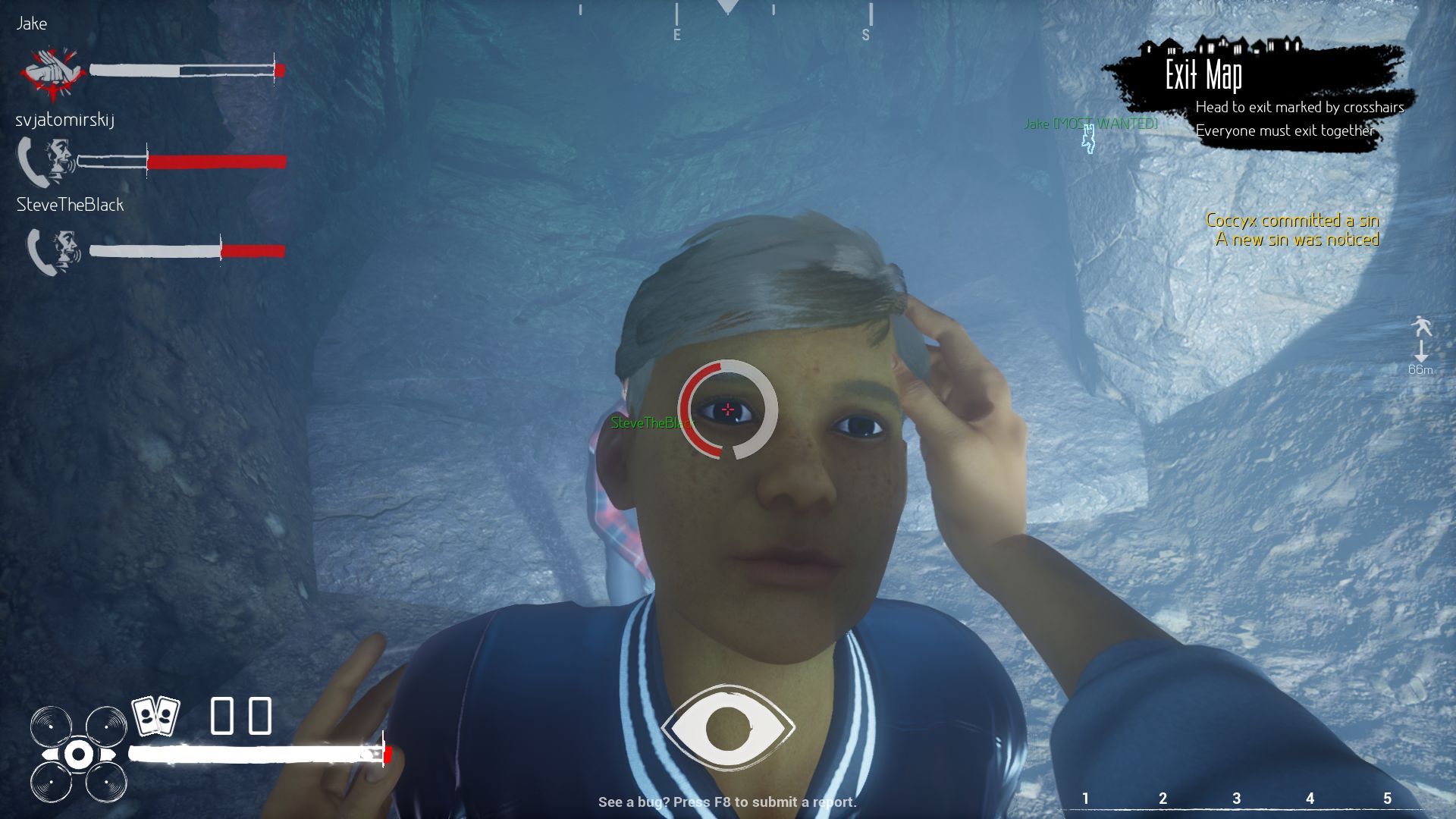 That’s the meat of it, then. Sneaking, with a dash of frantic running when that goes wrong. Your tasks are always straightforward: record this evidence, grab those cryptograms. Go find a kidnapped child, then untie her and run away based on the bizarre assumption that they’ll be able to make it out of the labyrinth unaided. That one’s a bit weird.

There’s an emptiness to those missions, though I’m hoping that’s a symptom of early access. I soon found them repetitive, but that may or may not be the case once there are more of them and they feed into a broader story. That first mission, the one that had me whimpering, was actually a special case. It’s part tutorial and part finely-crafted nightmare fuel, introducing you to each system through scripted sneaking and fleeing. It’s creepy in a way the procedural stuff never lives up to, even playing solo.

Not that it doesn’t have its moments. Blinding every ‘average Joe’ enemy was a brilliant idea: it means you can (and often have to) go right up them, just one step away from discovery. Better yet is when you need freeze to let one go by, and the sleepwalker slowly pads past your whole motionless gang. 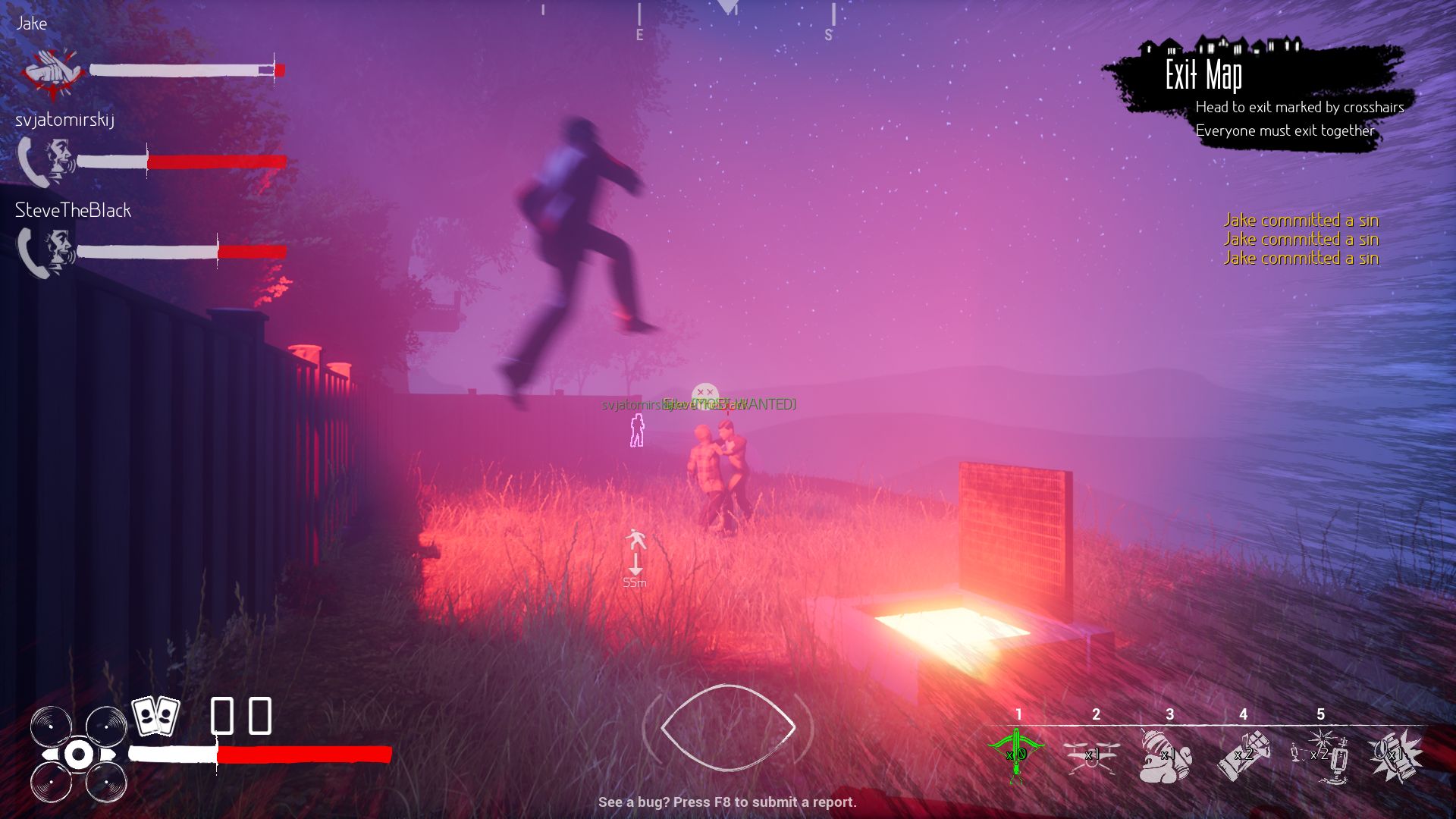 Best of all is when they’re onto you. When you’ve moved just a little too quickly, and they’ve started shambling in your direction – but not outright chasing. You can’t run either, at that point, but you’re doomed if you stay still. That’s a cracking dynamic.

The ‘do or die’ mission structure ramps up tension in its own way, I suppose. There’s no save to load if you’re caught, though you do usually get a second chance. Your friends can pounce on your assailant’s back as you get dragged away, towards one of many creepy red doors that open into oblivion. Or you might be able to save yourself by grabbing something off the floor.

It’s even more forgiving if you’re carrying an escape item, like a flashbang or a tranquiliser dart. Those can be put to better use, mind, as part of a plan to not get caught in the first place. 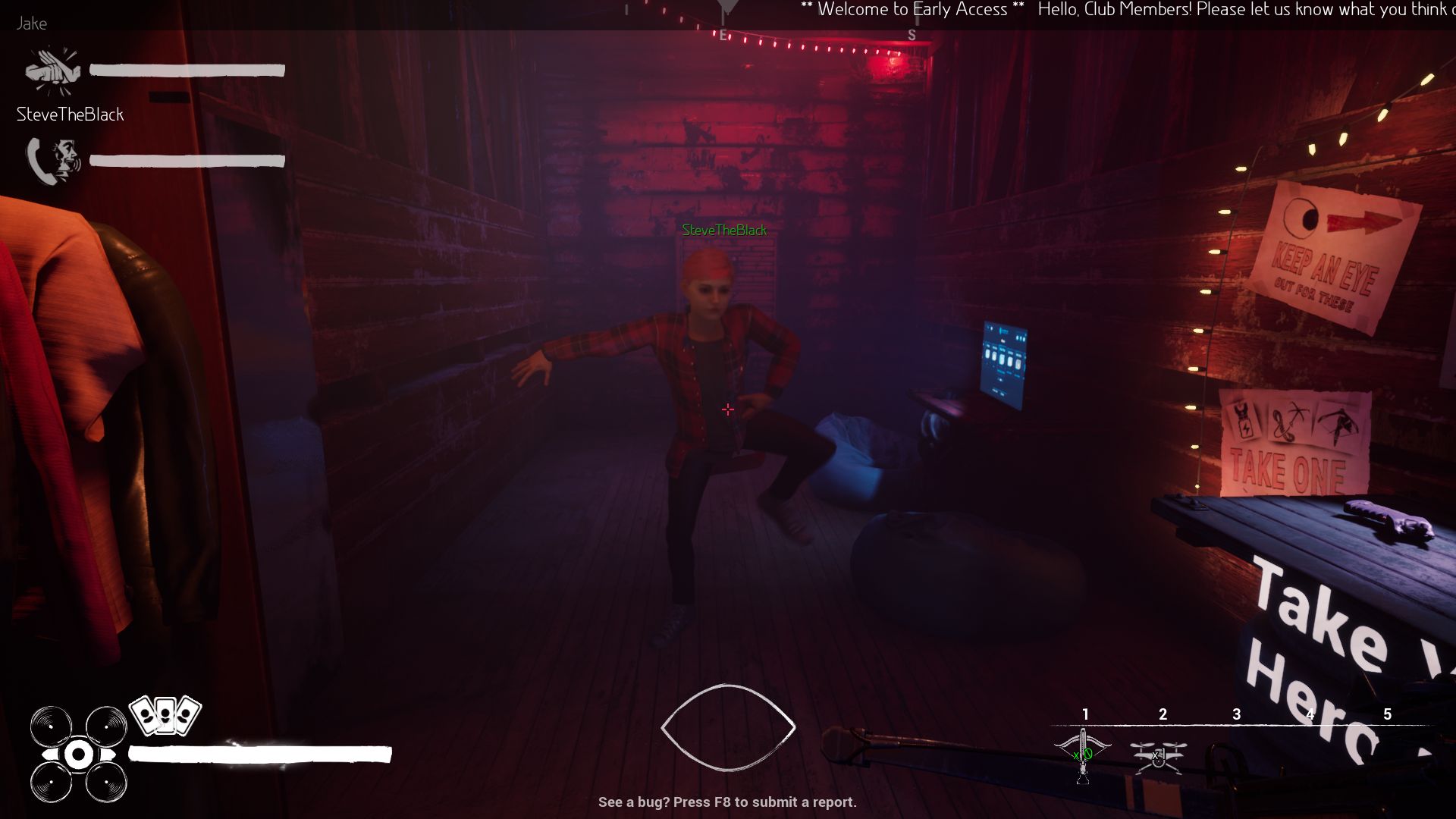 There are some fun toys in that gadget pool. My current favourite is a can of goop that lets you fall from any height without taking damage: perfect for both dramatic escapes and silent infiltration. You find them in boxes tucked around the map, which means you wind up using slightly different tactics each game. It’s nice finding tools I know I’ll use in the next few minutes, rather than eternally hoarding them like I do in longform games.

Those are good for making you feel important at crucial moments in multiplayer – sometimes more so than the special hero gadgets and powers, which are ostensibly there to give people different roles. You can take either a taser, a crossbow or a grappling hook, though I haven’t figured out why you’d want to zap enemies up close rather than knock them out from afar.

The crossbow is so useful, in fact, that at first my group considered opting for anything else to be a questionable decision. Understandable, perhaps, but driven by dogma rather than results.

That was before the mission where we delivered a screaming head underground. 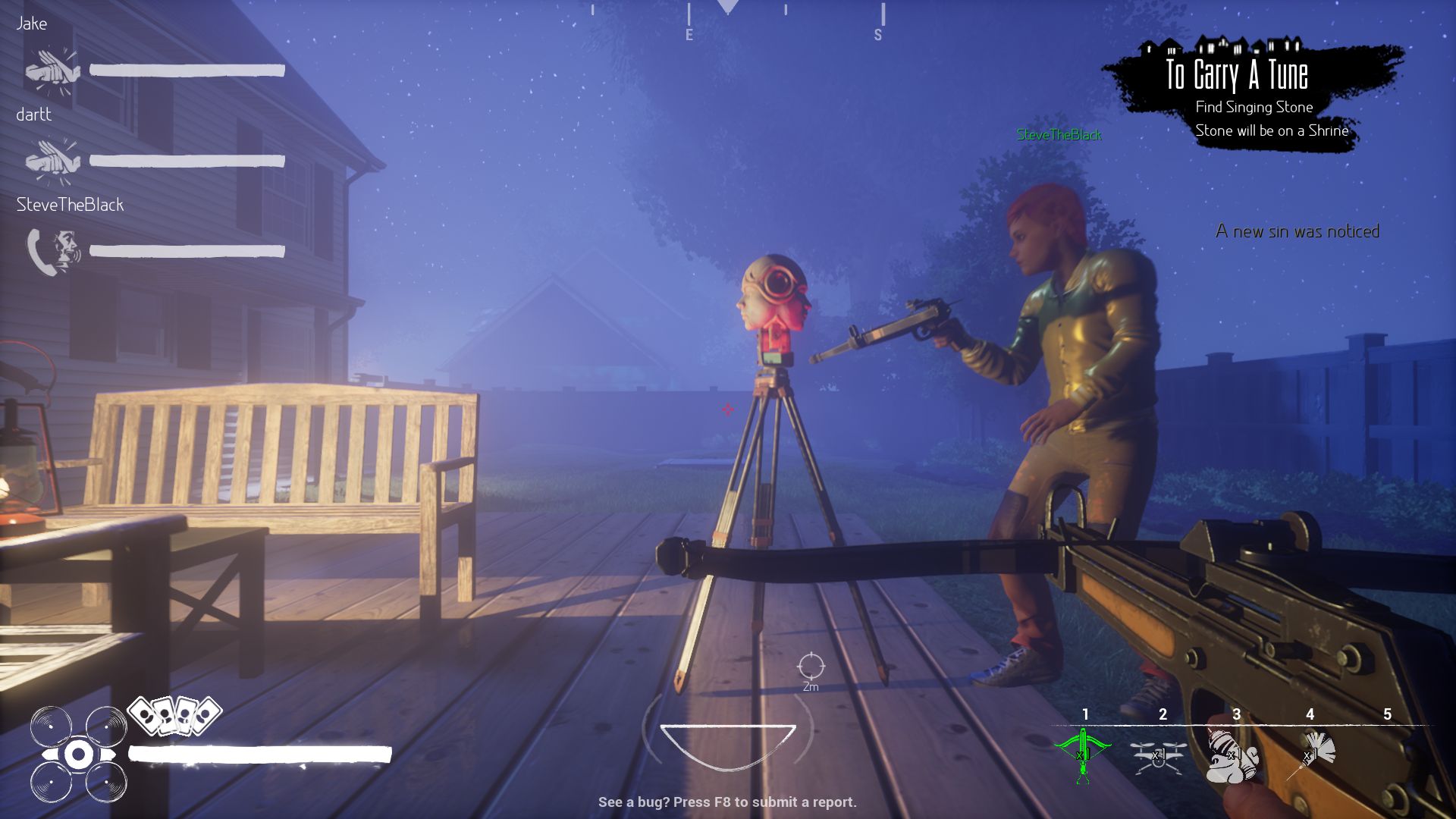 It’s hard to do that sort of thing stealthily, so by the time we needed to escape we had a pack of braying cultists on our tail. Not just mere humans, either: we’d earned the attention of the shape. That’s the bastard you can only see with your eyes closed.

Remember those doors I mentioned? The shape lives through those. It comes barging through them if you alert the cult too many times, which a screaming head tends to do.

We raced to a staircase, with nowhere to go but up… until we had no more up to go. I was convinced we were done for – that my friend had left his hook behind, having bowed to the wisdom of tranq darts. “Quick Dan”, I teased, “save us with your grappling hook!” Then he did. 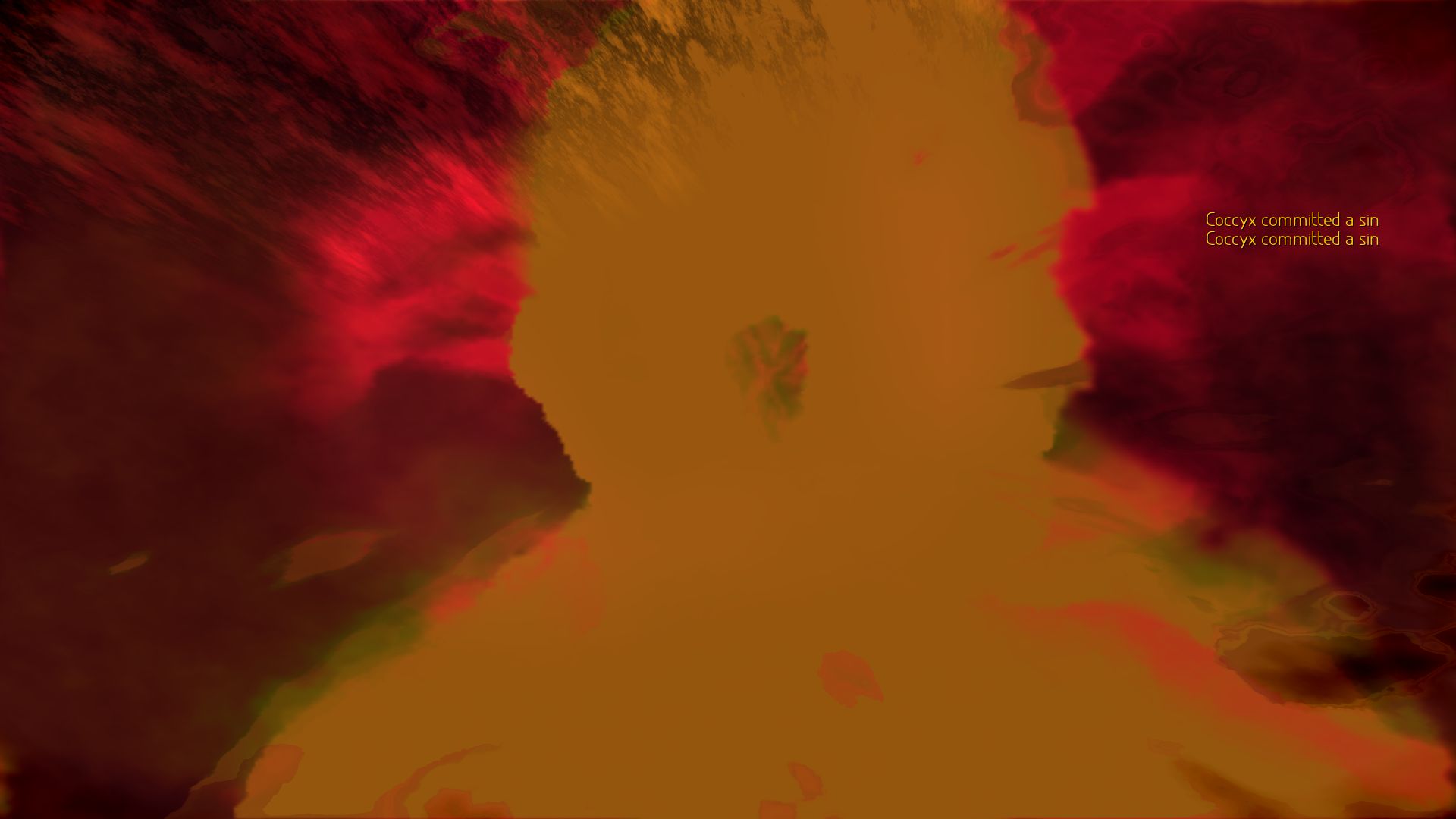 That panicked, gleeful leap for the rope contained nearly everything The Blackout Club can be. There’s something beautifully appropriate about a last second escape route saving the day thanks to one stubborn club member.

Still, that moment represents a peak rather than a norm. It’s hard to feel scared when you’ve got friends babbling in your ears, and it only became a horror game again once I ventured back into the underbelly by myself. Panicking can be social, but not dread.

Whether that matters depends on what you’re looking for. If you want genuine multiplayer horror, this isn’t it. If you want to lark about with chums and grappling hooks, jump right in – or wait until there’s a bit more to do.

More about The Blackout Club

Wot I Think: The Blackout Club

The Blackout Club's suburban gods are talking back

The Blackout Club emerges from the horrors of early access

The Blackout Club sneaks out of early access next month