When I saw the Asus ROG Swift PG27UQ for the first time back in May earlier this year, I thought the future of monitors had finally arrived. After more than a year of waiting, false starts and simply not being able to have as much fun as our console box friends with their fancy pants 4K HDR TVs, both the PG27UQ and the Acer Predator X27 promptly blew me away with their stunning Nvidia G-Sync HDR screens. Powered by 384 dynamic backlight zones that can reach up to 1000cd/m2 brightness, a massive 144Hz refresh rate and a 4K resolution, these were by far and away the best gaming monitors I’d ever seen.

Even now, months later that initial frisson of excitement hasn’t faded. Yes, there have been disappointments (*cough*Acer*cough*), and yes, neither screen is perhaps as perfect as it should be. But man alive, HDR on PC is still pretty special when everything gets it just right. And now, after having a second go on the Asus to re-test some of my previous colour accuracy figures (turns out I missed the not at all obvious option to enable its wide colour gamut the first time round), this is definitely the screen to go for if you’re thinking of picking one up on the cheap this Black Friday and Cyber Monday.

Admittedly, ‘cheap’ is a bit of an understatement when it comes to G-Sync HDR monitors. Currently available for £2200 of your fine English pounds or $2000 of your even finer American dollars (although keep an eye on our Best Black Friday and Cyber Monday monitor deals hub over the next week or so for even better deals), it’s no wonder that Asus had been keeping this particular bit of information close to their chest in the run-up to the PG27UQ’s launch.

£2200 is actually a fraction better than its original launch price of £2300, but I’m still not sure how I feel about that spending that kind of money on a gaming monitor. When I first saw the PG27UQ and Acer Predator X27, all Nvidia let slip was that they’d be “at least” a grand. A grand I can get behind. I’d spend a grand on a nice Ultra HD Premium-certified TV for playing games on, and I was sufficiently impressed by each monitor’s overall image quality at the time that I’d more or less convinced myself that, yes, I’d probably pay that amount of money for an equivalent monitor as well – even if these ones were only 27in instead of 55in. 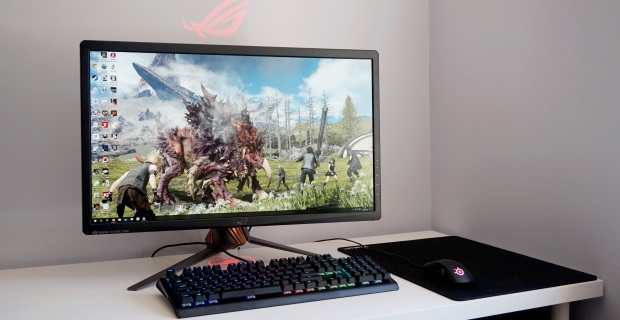 Two grand, however, is a lot harder to swallow. I suspect a fair amount of that is going on the PG27UQ’s laser light show that runs the length of its height-adjustable/rotating/swivel/tilt stand, as the Acer Predator X27 is noticeably cheaper. At the bottom you have the privilege of having a red ROG logo burned into the surface of your desk, while the top lets you sear the same ROG logo onto your back wall and/or ceiling. Yes, really.

LEDs aside, though, I’d be a lot happier forking out this kind of cash if HDR still wasn’t such a pain in the backside to set up and get working properly. In truth, this is more of a Windows 10 issue than a problem with the PG27UQ specifically, but the monitor doesn’t exactly help make things any easier.

Credit where it’s due: HDR on Windows 10 is now much better than it was a few months ago. The built-in brightness slider introduced in the last big April update for gauging what SDR (or regular ‘standard dynamic content’) will look like on your desktop when HDR’s turned on is infinitely preferable to not having one at all. But when the monitor also has its own brightness controls for HDR, the number of variables in play can make it pretty tricky to get a great picture right away.

Let’s start by leaving HDR aside for a moment and focusing on what the PG27UQ is like as an everyday monitor. You’ll find six colour profiles in its easy-to-use onboard menu system here, and (unsurprisingly) a lot of them are themed around gaming. By default, it’s set to FPS, but you’ll also find an RTS/RPG mode, one for Racing, and then Cinema, Scenery and sRGB profiles. The latter is quite restrictive in the number of additional settings it lets you play with, but the rest give you pretty much free rein to customise them how you want. 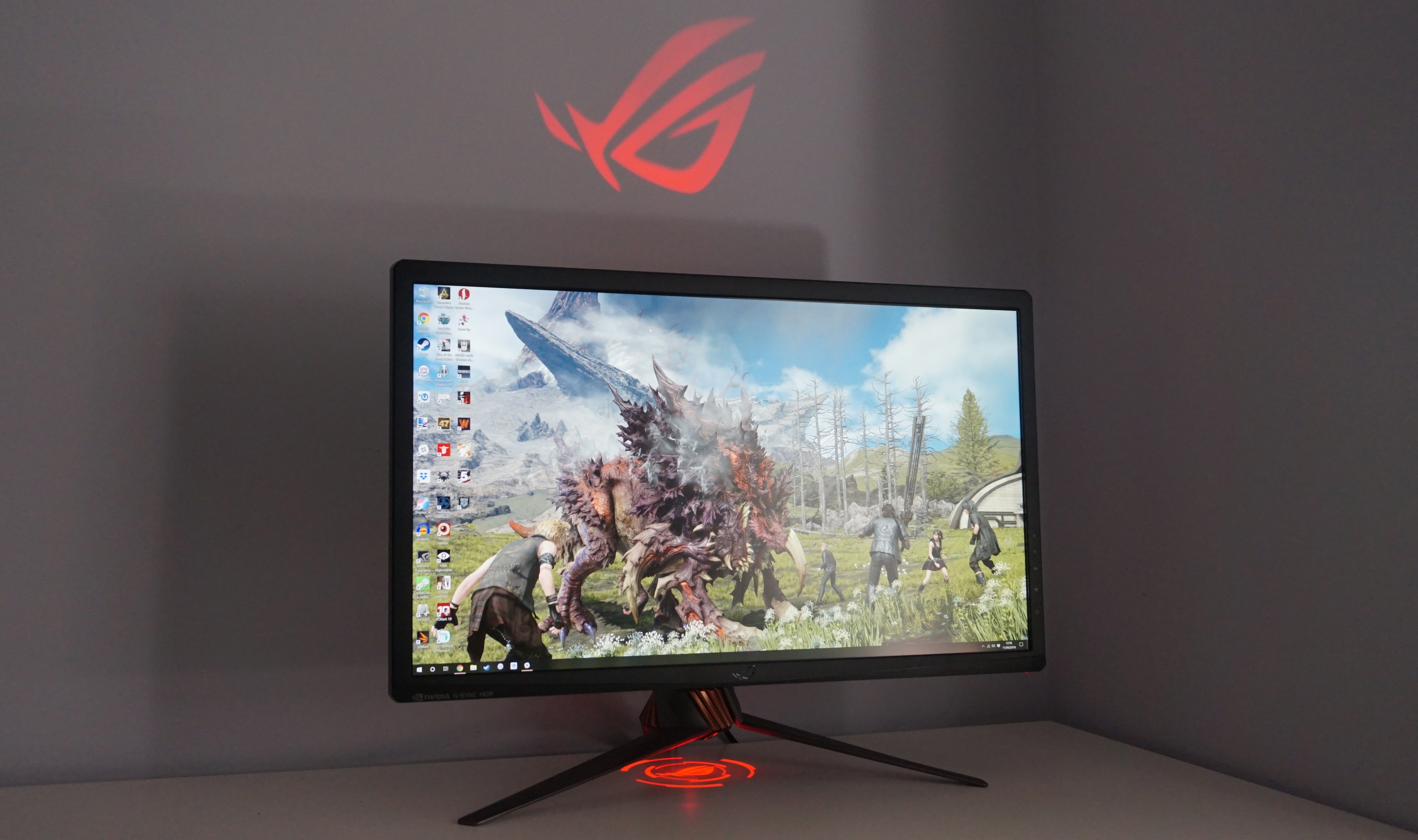 Play in the dark and that rear ROG logo is strong enough to beam up to your ceiling.

Initially, I have to admit I was quite disappointed. These results would be fine for a normal IPS panel, but when this is meant to be a super duper mega Nvidia G-Sync HDR monitor (not to mention one that’s supposed to be able to hit 97% DCI-P3 coverage by Asus’ reckoning) then barely hitting 70% DCI-P3 just isn’t going to cut it when you’re demanding north of two grand for it – especially when, I might add, the £166 / $230 BenQ EW277HDR can hit 91.9% DCI-P3 out of the box without any kind of HDR setting enabled whatsoever.

Turns out, Asus have hidden their wide colour gamut option down in the deepest, darkest depths of its System Setup menu, which is just a bit silly if you ask me. Switch this on and bingo – its sRGB coverage shoots up to a full 100% and that all-important DCI-P3 sky rockets to a much more agreeable 91.1%. Colours immediately became much more vivid and vibrant, and it carried over to whatever colour profile I was using as well. Job done. 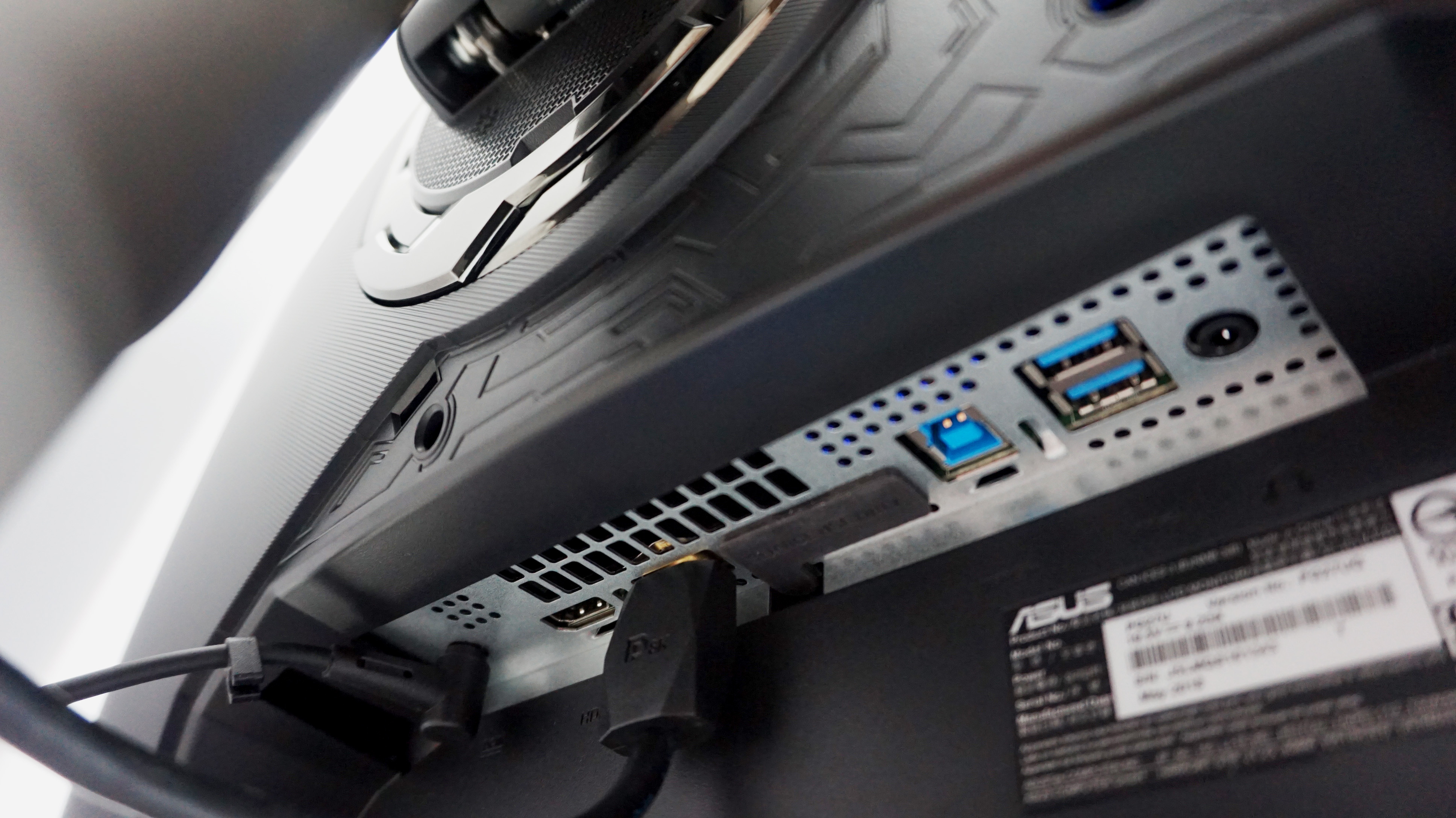 Well, almost. When it came to actually turning on HDR to play some games, it still wasn’t completely plain sailing. Admittedly, the PG27UQ doesn’t help matters by lumbering you an additional HDR brightness slider on top of the one that’s already built into Windows 10. The latter is, admittedly, meant for SDR content, but it can still play havoc depending on where it’s set.

When I first turned on HDR in Windows 10’s display settings menu, for instance, the monitor was so bright that I had to turn its SDR slider right down to zero to stop my eyeballs from leaking out of their sockets. A round of testing and a PC restart later, and zero was suddenly too dim – and indeed produced even worse results when I re-tested the PG27UQ to see what had happened. In this particular moment in time, somewhere around the 70 mark seemed more appropriate.

Then there’s the PG27UQ’s own HDR-specific ‘Reference Brightness’ setting to contend with. In non-HDR mode, you just get a normal brightness option like any other monitor. But turn on HDR and this splits into two settings – a greyed out maximum of 1000cd/m2, and a so-called ‘reference white’ option that seems to be based on whatever brightness setting you had in non-HDR mode. This set itself to around 220 during that initial test phase, but when I reset everything back to its defaults again, it only came up as 80. 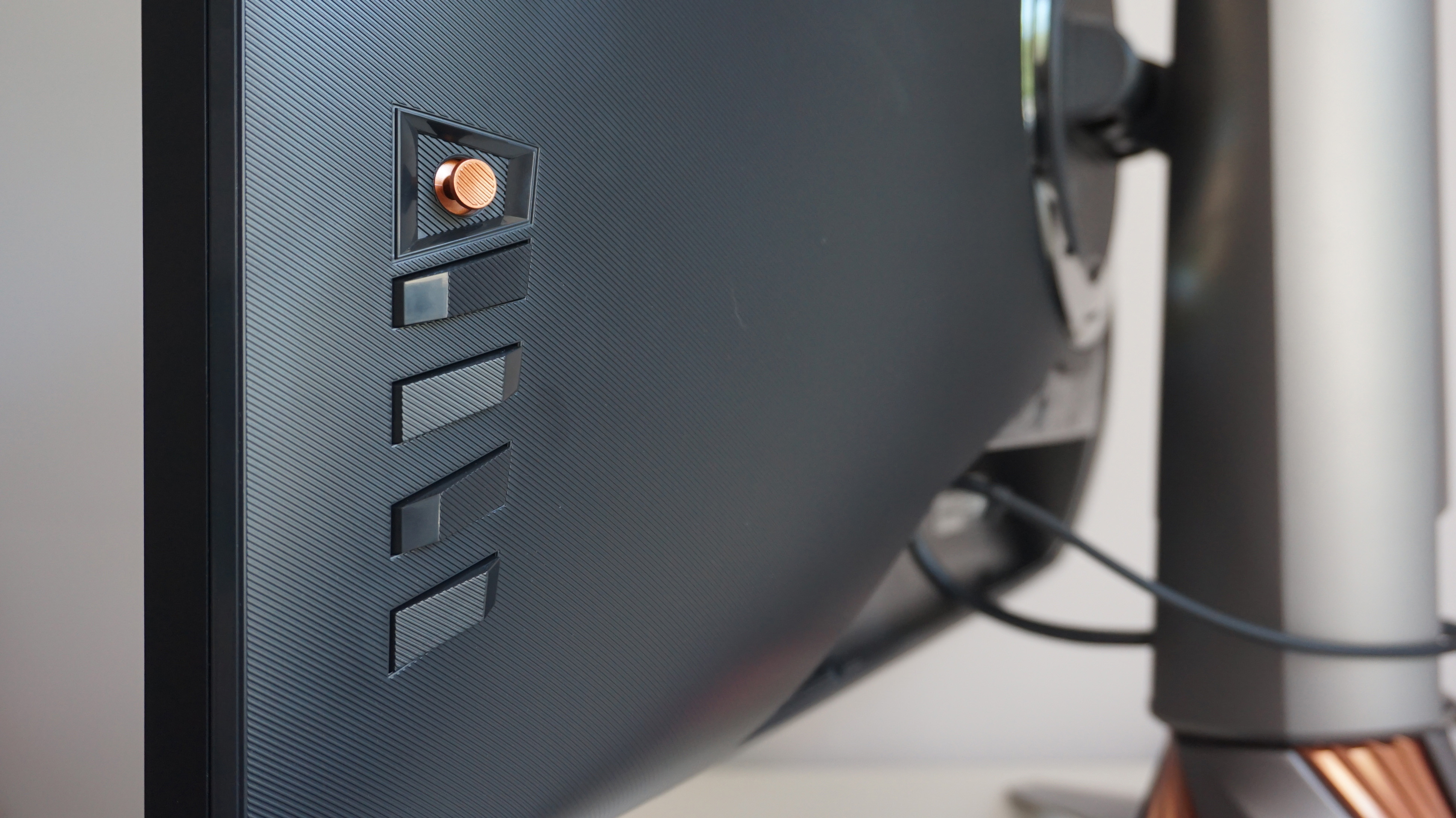 As a result, there’s a certain difficulty in trying to get the PG27UQ to behave exactly as you want, and that’s before you start throwing in-game brightness sliders into the mix as well, which just add another level of pain to proceedings that many may not be willing to deal with. Assassin’s Creed Odyssey, I’m looking at you.

When it all finally works, though, playing games on the PG27UQ is really like nothing else I’ve ever seen – and that’s including the Acer Predator X27. Despite sharing the same (and I mean exactly the same) panel as its Predator rival, this is still the most jaw-dropping implementation of HDR I’ve had the pleasure of witnessing so far, and games like Final Fantasy XV and Assassin’s Creed Odyssey look absolutely spectacular.

Colours just pop on the PG27UQ with such a vibrant intensity that you’ll want to dye your chocobos every colour of the rainbow just to get that mad rush of reds, greens and blues as Noctis and his pals charge across the screen. The same goes for Assassin’s Creed Odyssey’s stunning autumnal towns and landscapes, too. Never before how those sun-dappled hills glowed with such vibrant intensity. Combine that with the monitor’s frankly ludicrous brightness – I measured occasional peaks of at least 800cd/m2 when I placed by calibrator over sun flares and street lamps – and you’ll never want to drive Noctis’ Regalia round during the day ever again.

Thanks to its 384 dynamic backlight zones, neon signs and fluorescent bulbs burn with the same kind of ferocity as the sun when they’re pitched against the inky blacks of the dark night sky, and it gives the entire game a sense of realism and fidelity that just isn’t there when you’ve got HDR turned off. You might be causing long-term damage to your eyeballs in the process, but for Noctis and Kassandra. it’s worth every damn second. 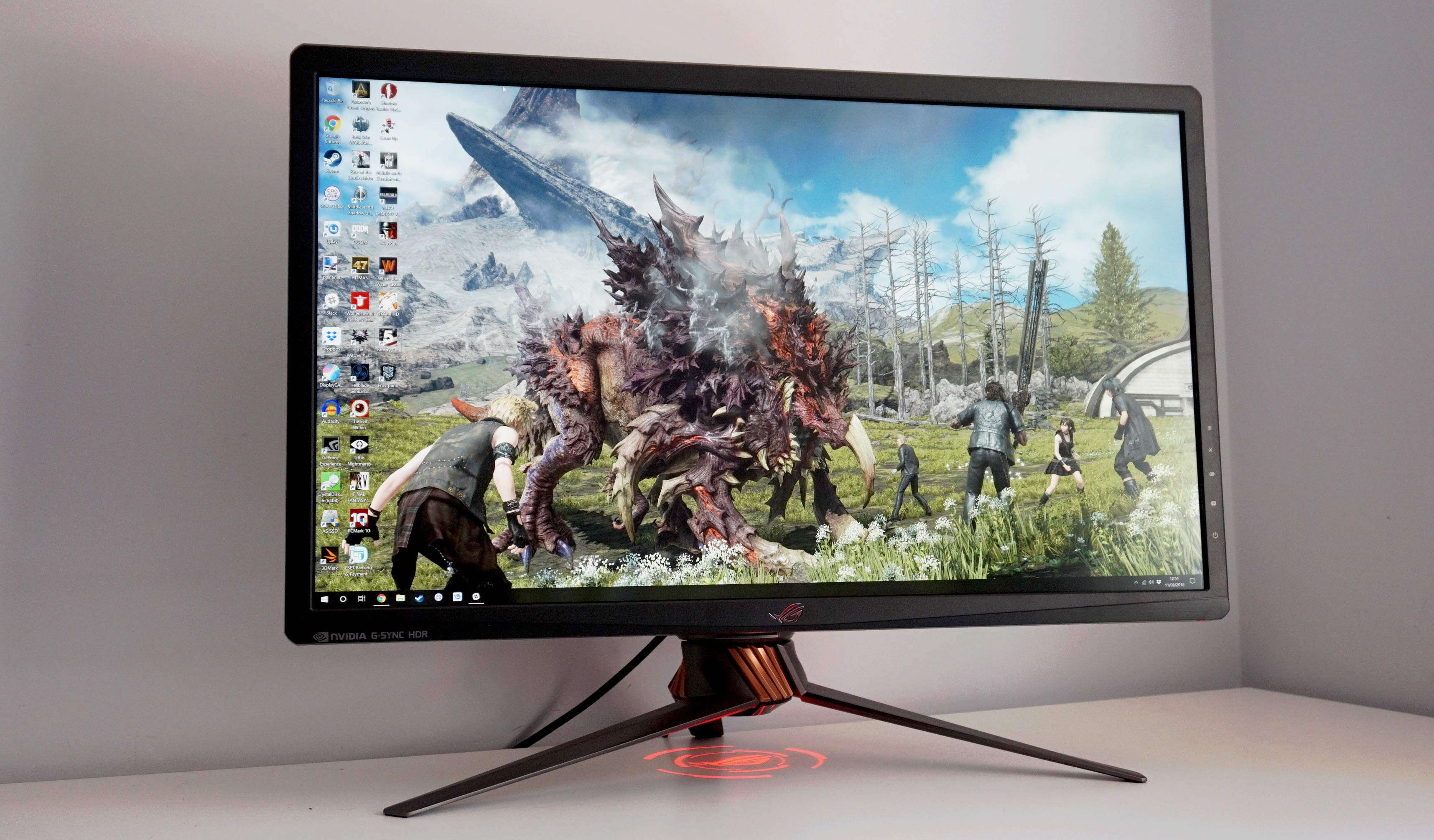 Assassin’s Creed Origins and Far Cry 5 looked equally impressive in their respective pixel flesh as well, even if both of them required even further tweaking to their own in-game brightness sliders to create the same kind of ‘Holy mother of bears and camels’ impact as Final Fantasy XV and Odyssey.

In this sense, I don’t really care that HDR is still an absolute pain in the backside to get right. This is still a damn fine monitor that impresses right from the word go – even taking it out of the box feels good, like this is a proper, premium bit of kit you’ve just dropped a truck’s worth of money on.

Indeed, now that I’ve had a chance to test the Predator X27 as well, the PG27UQ is almost definitely my favourite of the two, even if it is more expensive. This may change come Black Friday and Cyber Monday in just over a week’s time, as I know it’s definitely going to go on sale (Asus just haven’t told me by how much yet), but there’s still no getting past the fact that this is one heck of an expensive monitor. If you’ve got the cash, by all means go for it, as there’s no denying this is still a tasty, tasty screen if, like me, you’ve been dying to play Final Fantasy XV in all its 4K triple stacked ham, battered barramundi and horntooth meat pie HDR glory ever since you found out it was coming to PC. Really, though, I’d like to see a lot more HDR games on PC before taking the plunge myself.