The Smite and Paladins World Championships didn’t get off to an impressive start. Several thousand fans gathered around several adjacent screens occupying the back wall of Dreamhack Atlanta, each blasting out hype reels with near identical scripts. It was cookie-cutter drama played in disconcerting semi-stereo, leaving me uncomfortable in half a dozen different ways.

The phrase ‘low-production values’ can be vague, so I’ll try to be clear on why I’m so keen to use it here. Most glaringly, there’s the decision to hold the two competitions mere metres away from each other. An esports event, you’ll be surprised to hear, can be pretty distracting. Especially when you’re trying to watch a different one.

For a good half of the audience, much of their field of vision was taken up by the neighbouring event. It’s like asking people to sit down for a football match and then whacking them in the face with a baseball, and I’m genuinely baffled as to why they weren’t shown on opposite sides of the hall.

It’s bewildering that I had to position myself on the far side of the seating, and even that didn’t fully resolve the problem. I could still hear snippets of the other game’s audio, and I could definitely hear the braying of the other game’s crowd. Time and time again, a cheer would puncture tension while it was still building, and I’d instinctively glance away from teamfights I might otherwise have found compelling.

Take a look at what I was seeing. Let’s unpick this some more. 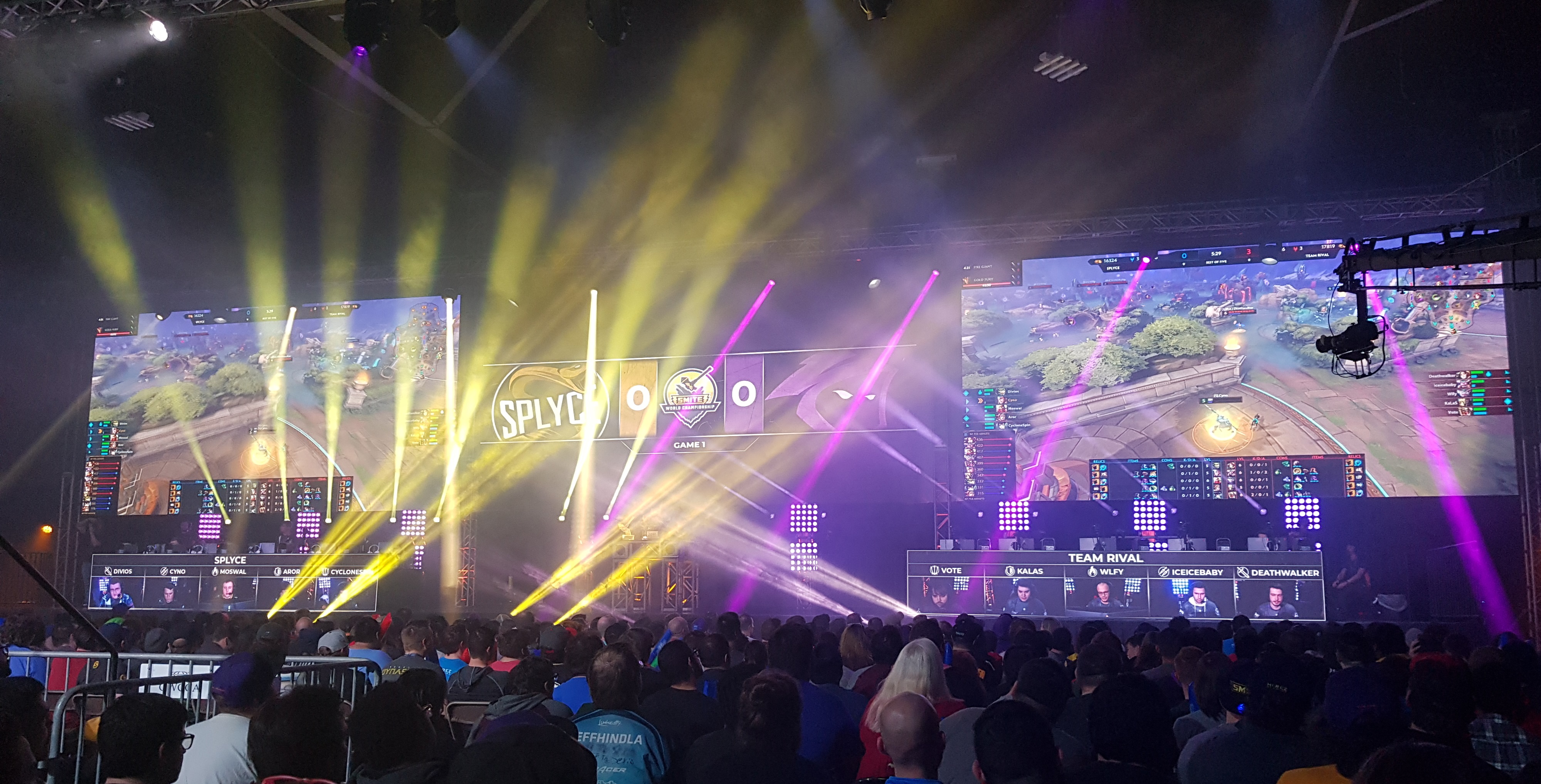 The next most glaring issue were those lights. I thought the thin blue lasers at the PUBG invitational were annoying, but in comparison I can’t help but admire the technician’s restraint. The yellow beams pictured above made that left screen unwatchable – which was a shame, because the one directly in front of me had a crane-mounted camera obscuring a good chunk of the screen. It would occasionally move around to ensure it was as much of a nuisance as it could be, and on one day an intermittent screen glitch obscured yet more of the action.

I believe that camera was mainly filming the crowd, whose reaction would occasionally appear on that underused middle screen. Those shots were nice. They were so, so far from worth it.

When I asked lead Smite designer AJ Walker if he was happy with the setup, I got the positivity I should have expected (along with the impression that he hadn’t sat in the audience for long.) “I’m quite happy with it, it’s been really fun. I love just seeing people walking by the Smite area that don’t necessarily know Smite, and are really impressed by our setup and our gameplay. But also, it’s still felt like we’ve had that same homely, community feel that we had at our old location.”

I can see where he’s coming from, except I didn’t see all that much homeliness at the esports themselves. Although, for all my complaints about a needlessly shonky setup, some parts of the events were genuinely lovely. Before the Smite semi-finals, the captains of teams Splyce and Rivals complimented each other while expressing quiet confidence. In a post-game press conference, Splyce’s support player burst into tears after an emotional victory. 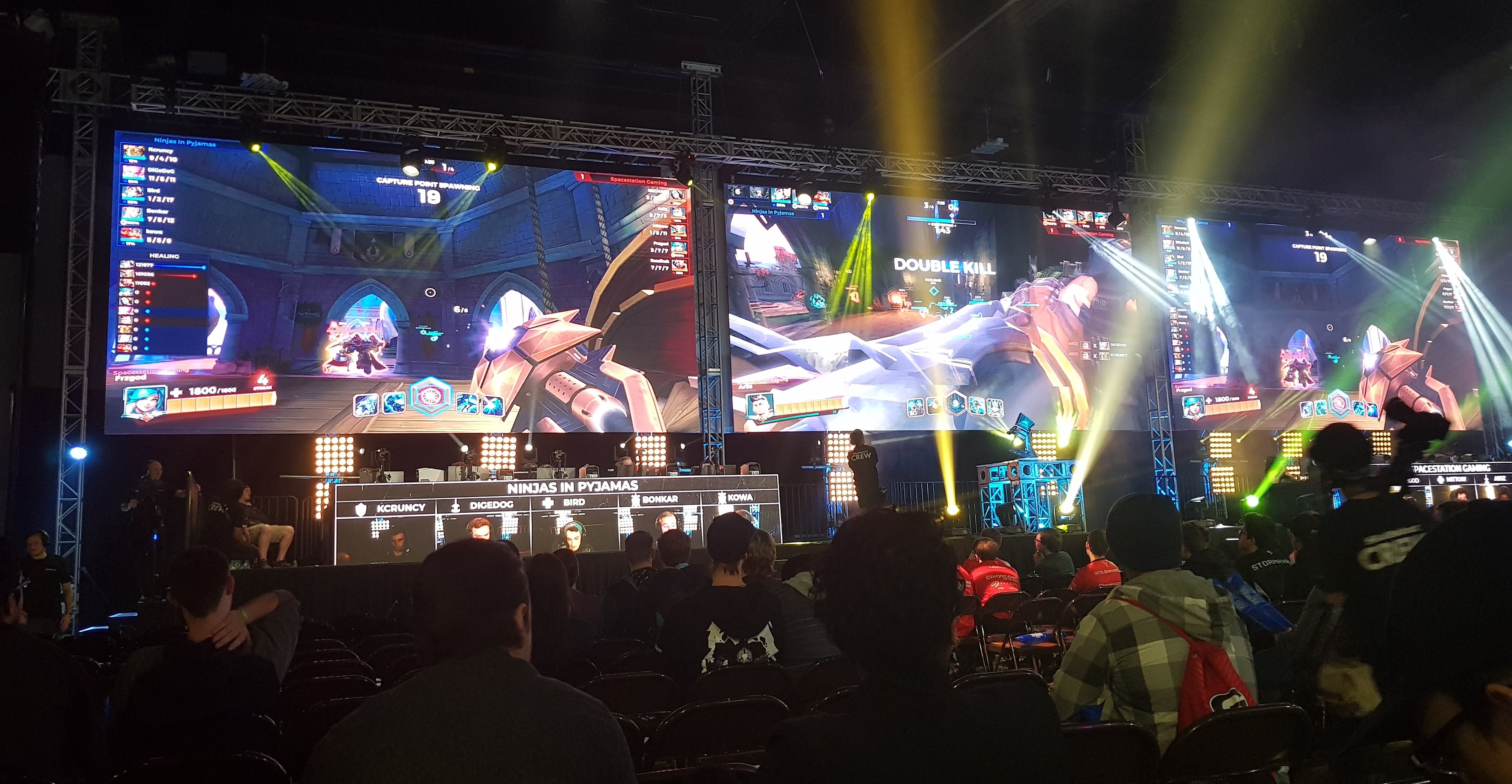 I haven’t said much about the quality of the matches themselves, and to some extent that’s because I’m not equipped to. That’s partly because I don’t know either game particularly well – the version of Smite I absorbed mostly consisted of different coloured whirlwinds smushing into each other. Still, while layers of it were inscrutable, it remained surprisingly watchable compared to Paladins. There was still tension in every chase, and glee at seeing someone diving into risky situations to get an impressive pick off.

With Paladins, the exclusive use of player-perspective cameras meant I often struggled to figure out what was happening. In a game where half the characters gambol and fly around the map at great speed, a floating camera strikes me as a necessity.

I did feel a certain buzz. There was the chanting, the enraptured faces banging their inflatable tubes together in support. With esports though, that’s the kind of buzz you get almost by default.