We’re living in a fighting game renaissance. There are fighting games for almost every taste, whether that’s epic family feuds involving demons and bear bodyguards, slapstick platformer shenanigans, Tetris anime crossovers, or cutesy horses kicking each other across the screen. But with so much choice one problem remains: fighting games are an intimidating genre to learn. Even with games like Skullgirls, Guilty Gear Xrd and Under Night giving you in depth step-by-step tutorials, there’s an overwhelming number of options to learn and keep in mind. So keeping that in mind, I’d like to suggest a very different alternative to learning the genre’s core concepts: Nidhogg 2.

Nidhogg 2 might not seem like the obvious choice; in fact, some might not even consider it a proper fighting game. It lacks the flashy combos, technical skills, and diverse rosters that help give fighting games their depth. But look closer and you’ll see that the fundamental skills needed to succeed at Nidhogg 2 are the same as those you’ll use in other fighting games, just at a smaller scale.

Fighting games, like many others, are fundamentally about controlling space. Most games allow you to exert your influence on a space, but what makes fighting games interesting is that it’s two human players vying for control, and often both are aiming for different advantages. That dynamic was definitely at play in the first Nidhogg, but the sequel adds new weapons and complications which give Nidhogg 2 clean analogues to the three main fighting game concepts I’m going to cover here: spacing, mixups, and matchup knowledge.

Spacing, or “footsies” as it’s colloquially known, is the core of a fighting games. Regardless of what game you play, this back and forth contest for control of the screen forms its backbone. When neither player is at an advantage, a mental contest begins, in which each player considers their own options while “poking” at the other with short, quick attacks, trying to find a gap in the opponent’s guard. These pokes occur in Nidhogg 2 as, well, literal pokes.

When using the foil or knife you’ll find yourself instinctively jabbing at the opponent while shuffling back and forth. If you’ve ever seen fighting games played at a higher level, the rhythm will immediately seem familiar. What makes Nidhogg 2 unique in this regard is the way it allows you to visualize your effective ranges. Footsies in fighting games often require you to keep in mind the opponent’s options – the moveset of kicks, punches and special abilities available to them – but in Nidhogg your weapons are almost always drawn, pointed and threatening each other’s space. The effects of losing control of the space are immediate too – the loser dies grotesquely while the winner literally runs away with the advantage. Instead of asking you to practice combos and get out the optimal damage, Nidhogg makes it clear in a single poke that if you lose the neutral you’re losing the game. 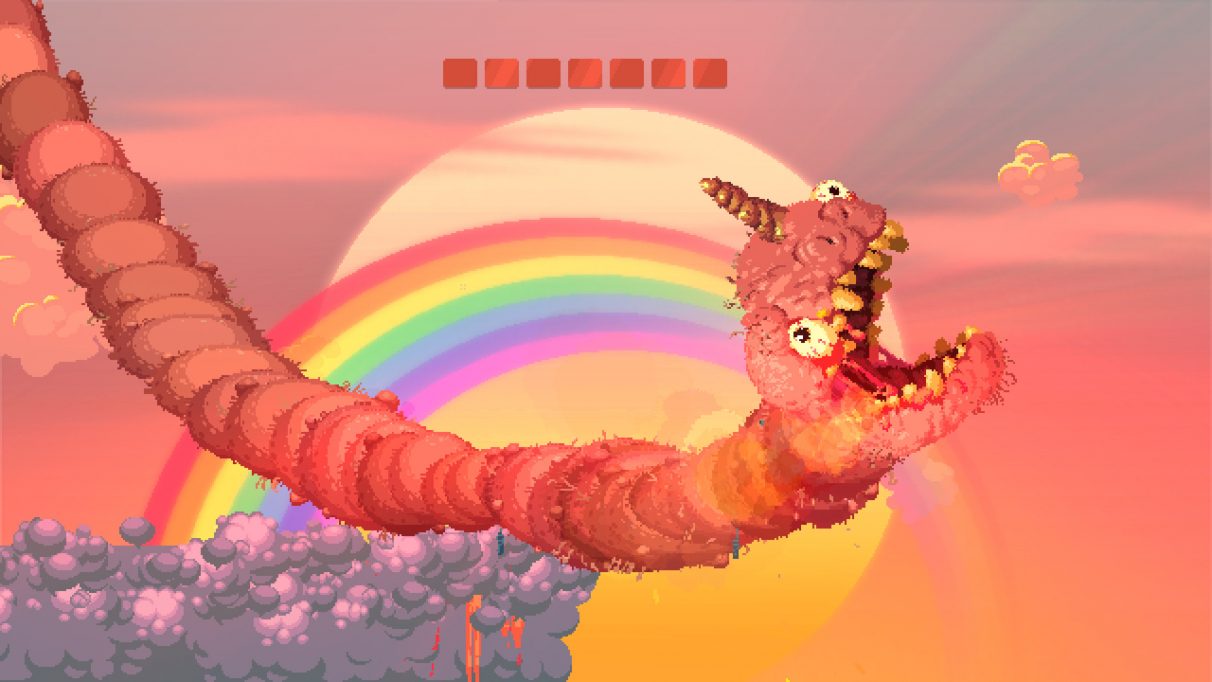 The wurm teaches you the fighting game concept of humility.

But what about those other two weapons, the broadsword and bow? This is where Nidhogg 2 gets you ready for fighting games’ deadly mixup situations. Like everything in the genre, there’s a lot more complications that I’m letting on, but in reductive terms, a mixup is putting your opponent in a situation where you’ve got two or more likely options, then forcing them to guess correctly or get hit. The bow is the best example of this tactic at play. Its startup time forces you to engage from a distance, giving the opponent more time to react than with close range weapons. Drawing the bow allows you to move between standing and crouching, forcing them to guess between a mid and low guard to counter. Even nastier, jumping while crouched will allow you to hop and shoot them in the head, forcing them to guard high. Similar options are available with other weapons, especially when complemented by the low slide or high hitting weapon throw, but the long range of the bow makes it especially potent.

Meanwhile the broadsword can quickly move between high and low guard, deny the space above and below it, and knock weapons right out of a player’s hands. That makes it powerful when starting the game, since it seems to outright beat many attacks. Except, with the right weapon, the situation changes entirely.

That’s where matchup knowledge will save you. The broadsword might destroy everything in front of it, but it can’t block mid attacks, so a quick jab to its holder’s gut will take them out. Or you can force them to time a difficult reflect with the bow. If you’ve got a dagger you can force your own mixup: dash at them and make them guess if you’re going to run through them with a quick stab or slide under to trip them. Or if you see them swing from a high stance you’ll know that their attack will end in a low stance, giving you an opening to just chuck your blade right at their head.

These sorts of dynamics are what make fighting games so lively and give them their depth. This isn’t a comprehensive rundown of concepts either. Within Nidhogg 2 alone you can apply whiff punishes (attacks that specifically target opponents after they miss an attack), anti-airs (moves that target airbone attacks), and there are many other nuances to high and low guards.

Nidhogg 2 doesn’t make these fighting game concepts any less complicated. What it is does is crush them down to a smaller set of variables and take away the execution barrier, without losing its intense competitive energy. It’s a legitimate competitive spectacle on its own, making it a good way to learn without feeling like you’re doing schoolwork. And once you understand the rules at play you can gradually apply them to other games.

Which of these character’s punches and kicks serve as my pokes? Which moves can I use to deny an opponent approaching from the air? How does this character’s set of tools interact with the ones that my opponent has? A common mistake beginners make when playing fighting games is looking at the massive lists of characters, moves and combos and trying to make them all fit into every match. Nidhogg 2 reminds you that at the heart of each fighting game is a mental fencing match for every inch of space. Every step matters, and you’re always one good thrust away from stealing the momentum and winning it all.