Despite being part of the same series as MSI’s console-like Trident 3 8th PC, the Trident X is a much more substantial kind of gaming desktop. It’s much larger for starters, although its 396x383x130mm dimensions still place at the smaller end of the desktop PC scale, and its fixed base means it has to stand vertically instead of having the option to lie it on its side.

The 9th part of its name also signifies the presence of one of Intel’s new 9th generation of Coffee Lake CPUs – in this case, the eight-core 3.6GHz Core i7-9700K. Paired with Nvidia’s GeForce RTX 2080, 32GB of RAM, a 256GB NVMe SSD and a 2TB HDD, MSI’s Trident X 9th is a pint-sized powerhouse that means business. It does, however, cost an arm and a leg, with a particularly bum deal for anyone in the UK.

Priced at a rather extortionate £2700 on these fair shores, our pals over in the US have a much better offering on their hands. There, this particular configuration of the Trident X 9th goes for just $2300, which according to Google’s conversion rate at time of writing is closer to something like £1800. Sure, the US model only comes with 16GB of RAM as opposed to 32GB in the UK, but that’s still a pretty steep mark-up.

A large part of the Trident X 9th’s cost no doubt comes from its compact design and RGB lighting. The latter uses a similar three-pronged LED design to its smaller Trident 3 cousin, and comes with MSI’s Mystic Light software pre-installed for anyone who wants their rear fan, graphics card and front panel to blink and flash in rainbow-coloured unison. You can, of course, turn it all off if you prefer, but nothing I found will alter the eerie red glow leaking out of the rear port panel. That, you’re stuck with. 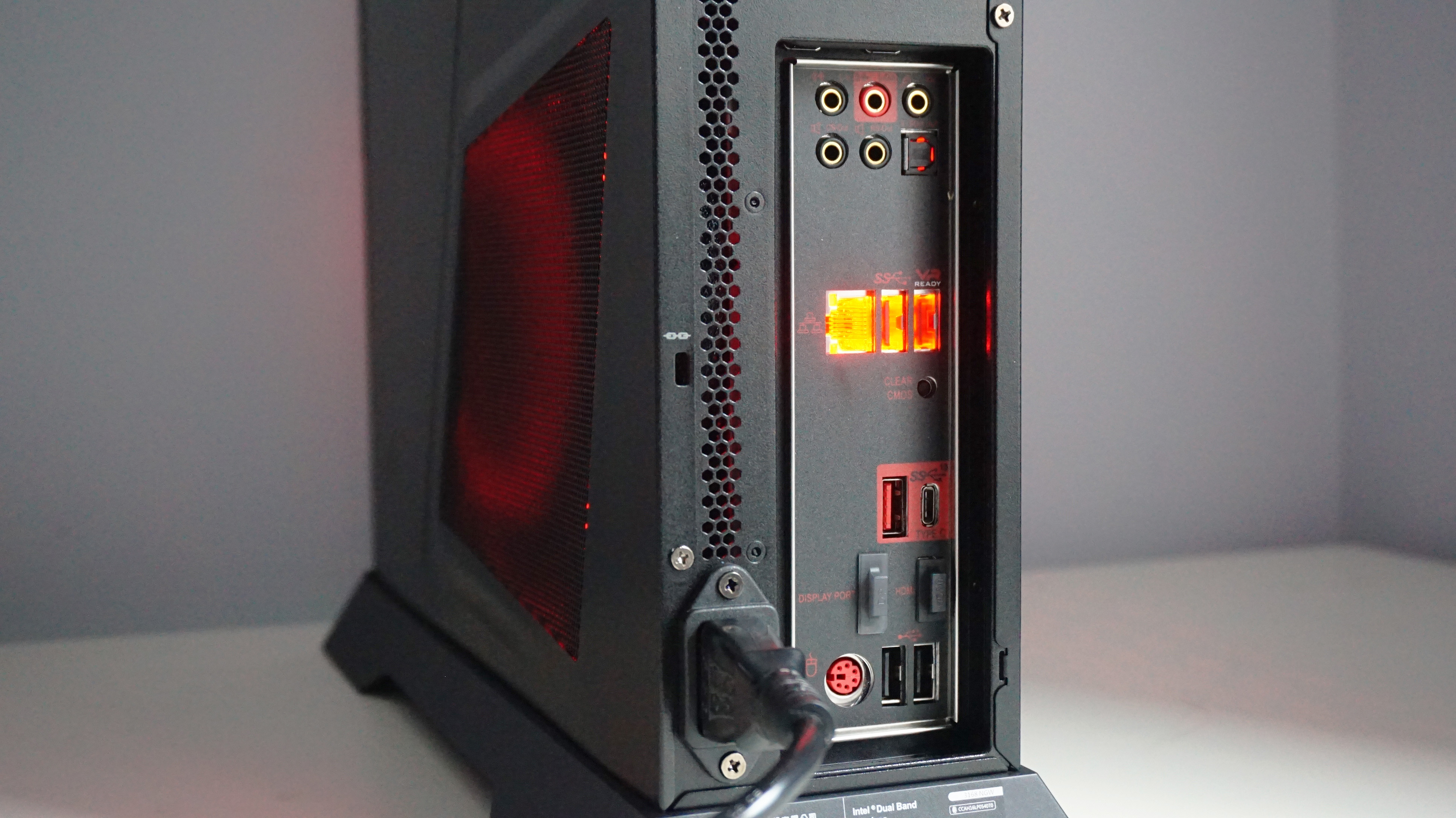 Regardless of whether you set the Trident X’s LEDs to go full RGB or just a simple block colour, these three ports round the back remain a constant, glowing red.

You’re also going to be stuck with most of the components inside it for the duration of the Trident X’s lifetime, too. Despite coming with an interchangeable tempered glass panel in the box, most of the PC’s innards are sealed off from view, leaving little too look at through the glass and very little scope to swap bits in and out further down the line.

The only thing that’s feasibly upgradeable is the PC’s storage, as it’s one of the few bits that’s easily accessible. I had a go at trying to remove the vertically-mounted graphics card, but in the end I gave up because it was just too fiddly. Everything else is mounted facing inside the PC, not toward you, and you’d have to have some serious know-how if you wanted to try upgrading it in the future. That’s not exactly ideal for such an expensive system, although given the calibre of the components you’re actually getting, it should be a fair old time before you do actually feel the need to refresh it.

MSI’s onboard Command Centre software also gives you plenty of options for getting the best out of the Trident X 9th as well, allowing you to overclock the PC without having to deal with its BIOS interface. Again, this won’t be for the technically faint of heart, but I was pleased to see you could overclock each CPU core to your liking, adjust the CPU fan speed and voltage, as well as RAM voltage and frequency as well. The detail is there for those that want it, and doing it all here is infinitely preferable in my option to faffing around with the BIOS.

For testing, I left the PC at its default speeds, as you’d find it out of the box. Starting with the Trident X’s Intel Core i7-9700K, this processor is more than capable of handling any kind of desktop task you throw at it. Compared to the Core i7-8700 you’ll find in the Trident 3 8th, you’re only getting marginal gains in performance – around 6-7% in single core tasks and just over 12% in multi-core speeds, according to my Cinebench R15 results – but that’s still more than enough for intensive video and photo editing programs as well as playing games. 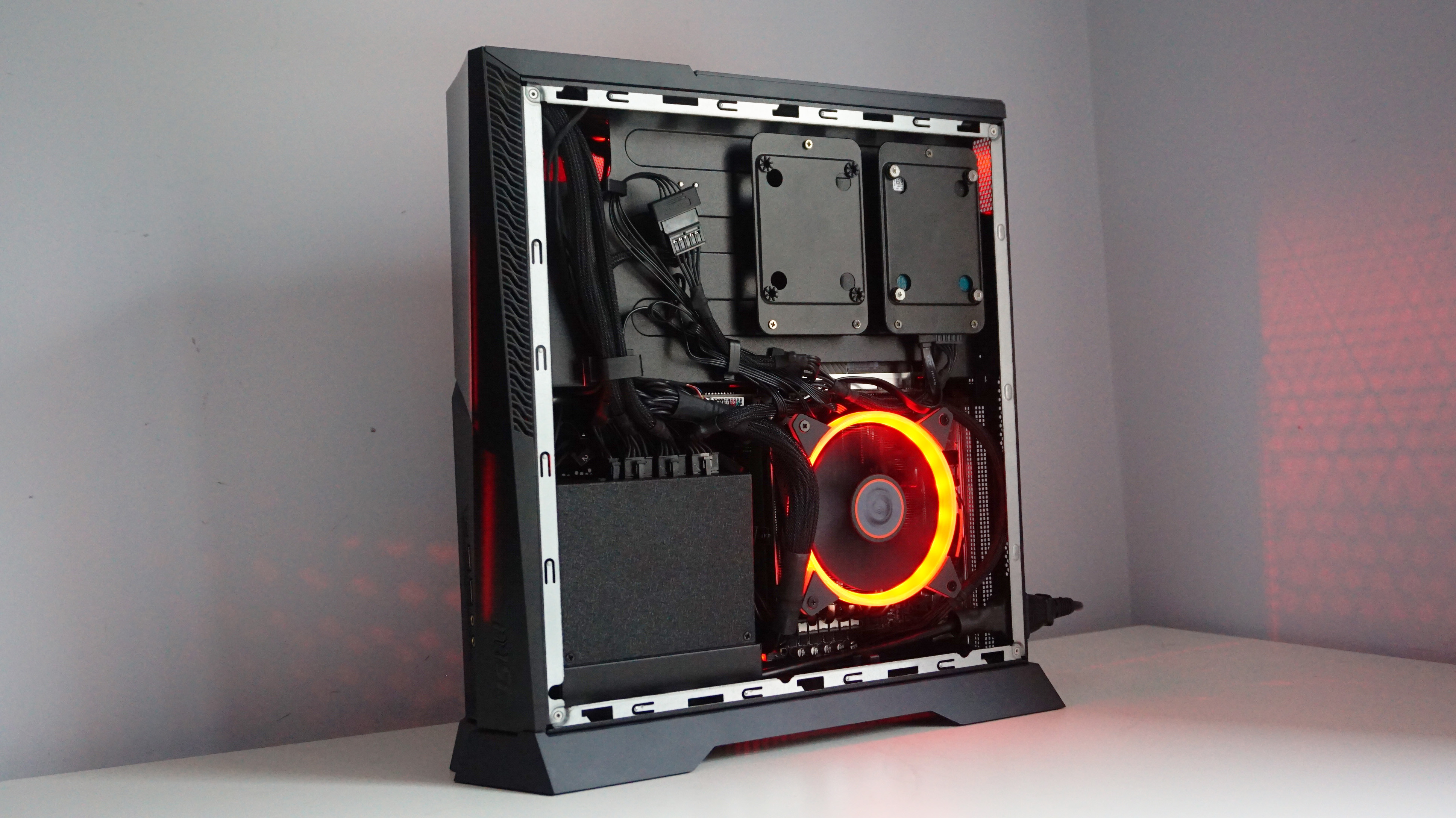 Sure, you get the option of swapping its plain black side panel for a tempered glass one, but there’s not a lot to look at…

Speaking of games, MSI’s RTX 2080 graphics card is, as you’d expect, pretty beastly. In most cases it was able to hit at least 60fps at 4K on either maximum or High graphics settings, while 1440p and 1080p resolutions were an absolute doddle. With Nvidia’s special RTX effects finally starting to trickle through now, such as its fancy pants ray-tracing reflection tech in Battlefield V, the RTX cards are gradually starting to make a more compelling case for themselves over their GTX, non-ray-tracing cousins. It’s still early days yet, especially when Microsoft’s ray-tracing enabling Windows 10 update seems to be MIA at the moment, but as I mentioned at the start, if you want a machine that provides a fairly hefty dose of future-proofing, an RTX 2080 machine like the Trident X is worth considering.

It’s still not completely perfect at 4K – you really need one of Nvidia’s GeForce RTX 2080Ti cards for that – but an average of 43fps in Assassin’s Creed Odyssey on its top Ultra High setting at 4K isn’t half bad for such a comparatively small system. Neither is a range of 47-59fps in The Witcher III on Ultra at 4K, or another average of 43fps in Total War: Warhammer II also on Ultra at 4K. In each case, I only had to drop the settings down a notch (all right, two in the case of Assassin’s Creed) to get a smoother 60-odd fps, so you’re still looking at playing on High at the very least if you want to hook it up to a 4K TV in your living room, for example.

The Trident X 9th also managed to hover either side of 50fps on Highest in Shadow of the Tomb Raider when I had the lowest SMAA anti-aliasing enabled (the full SMAA x4 saw it tumble closer to 35fps), but stick it on High with SMAA and you’ll see a much smoother 55-60fps. 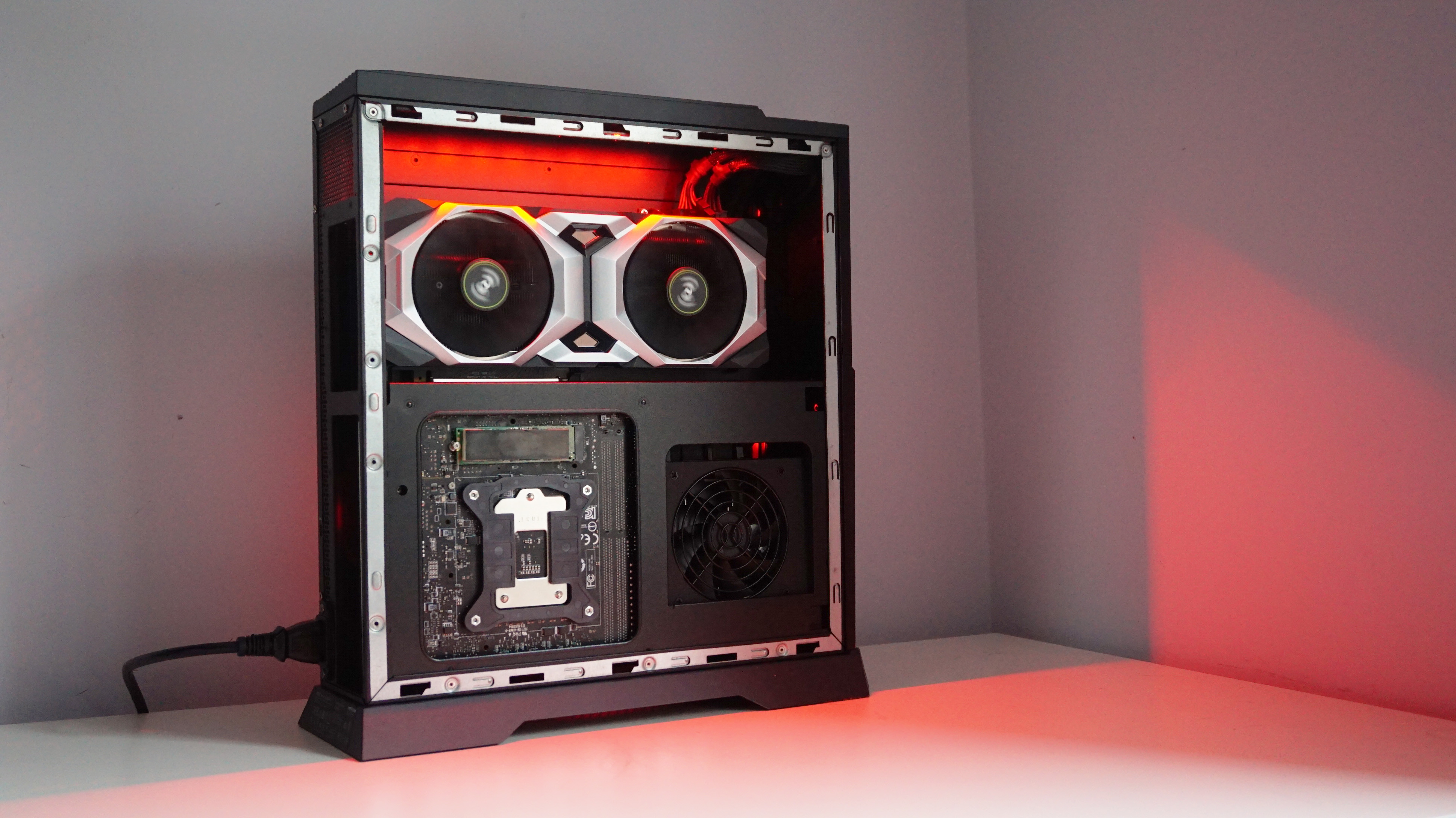 The other side’s a little more appealing, but most of the most eye-catching stuff is still blocked from view.

Meanwhile, Doom and Forza Horizon 4 posed no problem at all for the Trident X 9th, with the latter soaring up around the 100-120fps mark on Ultra at 4K, while the latter averaged out at 78fps on the same settings. The only game that needed a bit more fine-tuning at this resolution was Final Fantasy XV. I still got a respectable 39-47fps with all of Nvidia’s fancy effects turned off on Highest at 4K, but those looking to partake in some HairWorks and TurfEffects magic will probably need to settle for Average quality at this resolution, or drop the number of pixels down to 2560×1440, as even switching these two on at Average at 4K only saw a frame rate of around 45-50fps with lows of 35fps. Throw in the ShadowLibs and VXAO lighting effects and you’re looking closer to an even less satisfactory 35-40fps with lows of 29fps.

At 2560×1440, though, you can more or less crank everything up to max settings and get a frame rate of at least 60fps in the games mentioned above, if not in the realms of 75-120fps. Final Fantasy XV will once again need a little more tweaking than most – I saw between 47-52fps with everything enabled on Highest and 56-62fps with just TurfEffects and HairWorks in action – but they’re far more minor adjustments than you’ll have to put up with at 4K. Needless to say, 1920×1080 is also no trouble at all for the Trident X 9th, with all but two games (Final Fantasy X and Assassin’s Creed Odyssey) reaching well over 100fps on their highest respective settings.

Really, though, you’re probably not buying the Trident X 9th to play games at either of these resolutions. There are dozens of other desktop PCs out there that can easily do 60fps at 1080p and 1440p without requiring you to spend either $2300 / £2700, and even if you are looking for a 4K-capable machine, there are also cheaper RTX PCs out there as well, particularly if you’re buying in the UK. The Core i7-9700K / 16GB configuration of Asus’ ROG Strix GL12CX goes for £2500 in the UK, for example, or you can configure your own nigh-on identical specification at somewhere like Overclockers UK for closer to £2000. Sure, those PCs will be much larger than the Trident X 9th, but performance is going to be pretty much identical and they’re also going to be eminently more upgradeable in the future. Plus, no one needs 32GB of RAM for playing games right now. 16GB will do you just fine. 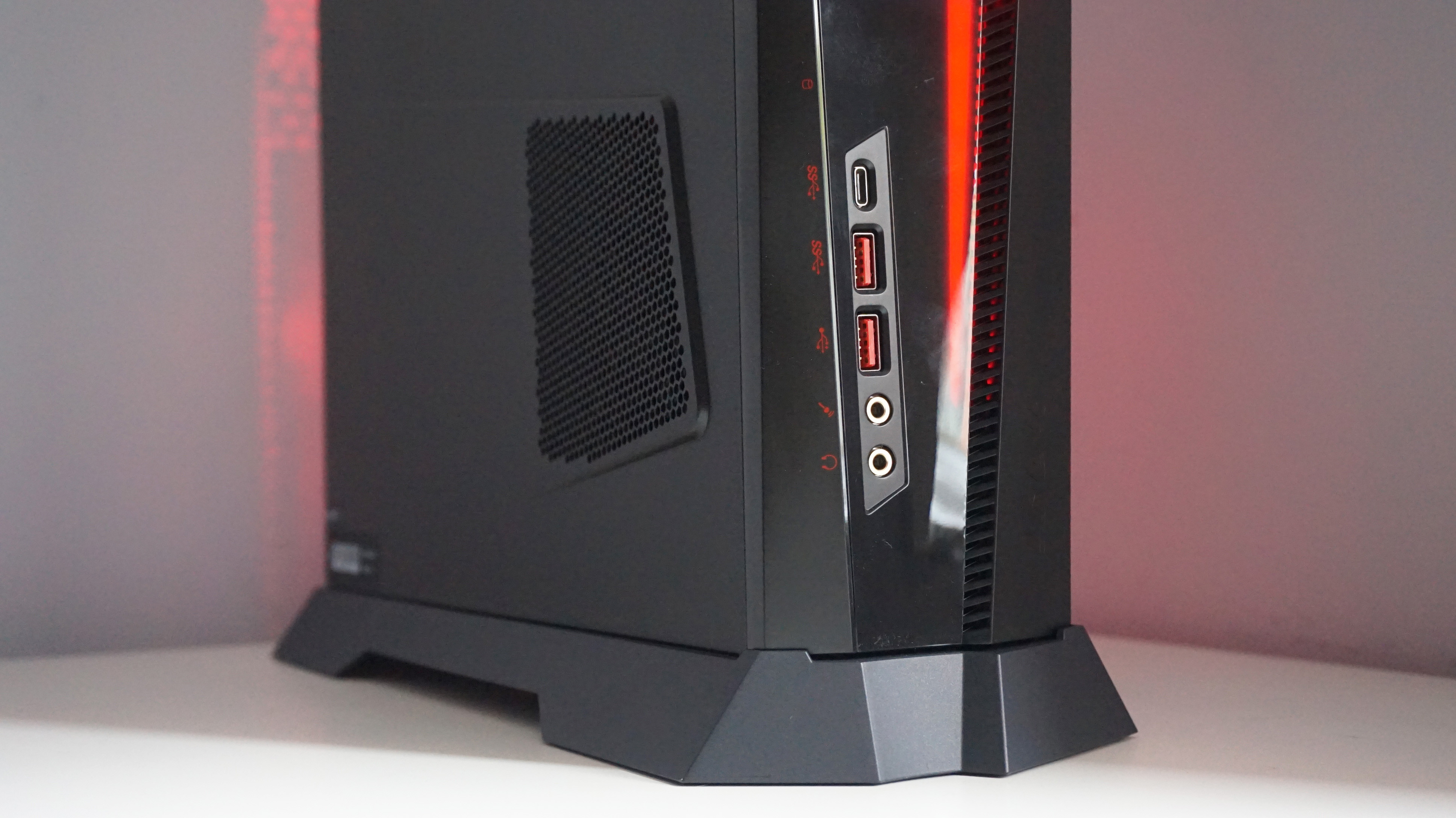 The Trident X comes with a decent range of ports, including a trio of USB ports (USB-C, USB 3.1 Gen 1 and USB2) and separate headphone and microphone jacks on the front.

Even the Trident X 9th’s storage isn’t much to write home about, either. While a 512GB Samsung-branded NVMe SSD and a 2TB Seagate Barracuda HDD combo sounds like a great idea, its SSD speeds leave something to be desired. For instance, its random read speed actually came in slower than the 2.5in SATA-based Samsung 860 Evo when I put it through AS SSD’s 1GB random 4K test: 34MB/s versus 40MB/s.

That might not sound like much of a difference, but when you consider a proper Samsung NVMe SSD such as the 970 Evo can hit random read speeds nearer 55MB/s, that performance gap starts to become much more apparent. Thankfully, the SSD’s random write speed result was more befitting of its NVMe status, coming in just 2MB/s behind the 970 Evo, but it’s still not quite as good as simply having a straight-up 970 Evo under the hood.

Ultimately, the Trident X 9th just feels too expensive for what you’re actually getting. Yes, you’ve got as much power as the sun inside this slab-like chassis, but there are better, brighter suns out there too that won’t burn such a huge hole in your wallet.