Let’s face it, news about graphics card software updates is infinitely less sexy than news about proper, new graphics cards, but AMD’s latest Adrenalin 2019 Edition package has a string of neat-ish features that current AMD GPU owners may want to take note of, such as free, in-home streaming to your phone or tablet, an easier to parse set of menu options and even more tools to help you get the best out of your RX or Vega GPU.

Available today (Adrenalin 18.12.1, if you want the exact version number), arguably the most exciting feature is the addition of in-home streaming to AMD’s Radeon ReLive, letting you play your entire library of games on any Android 5.0 / iOS 10+ device via the AMD Link app. The basic principle isn’t any different from what you can already do via Valve’s Steam Link app, but as someone who’s always looking for more ways to spend a larger amount of time playing games in my living room with my husband and fellow RPS video bud Matthew as opposed to my cold, cold office where my gaming PC lives, this is welcome news indeed.

It works, too. You’ll still need one of AMD’s best graphics cards tucked away in your PC in order to use the service, but with support for resolutions up to 4K and 60fps, I was pleasantly surprised when I was shown a demo of sprawling stab ’em-up Assassin’s Creed Odyssey being streamed to a phone encased in a Bluetooth controller grip from a PC across the room. There wasn’t even a hint of delay as I sliced up the local wildlife, and everything felt as smooth as playing it on a regular PC. Indeed, AMD claim their streaming tech is 44% faster when it comes to responsiveness than Steam Link. That’s based on AMD’s own median latency testing score of 70ms from click to response, compared to Steam Link’s median latency of 125ms.

You can turn your PC monitor off while you’re streaming, too, and you can use either onscreen controls or connect your own Bluetooth controller. It was a bit of a faff getting the latter connected in all honesty, but after a bit of menu prodding I was able to ditch the onscreen controls altogether and kick back with an Xbox One controller. You’re not limited to streaming games, either, as it essentially streams your entire desktop, letting you watch videos (also up to 4K resolutions) or listen to music while you’re in a different room or cosied up under your duvet, for instance. 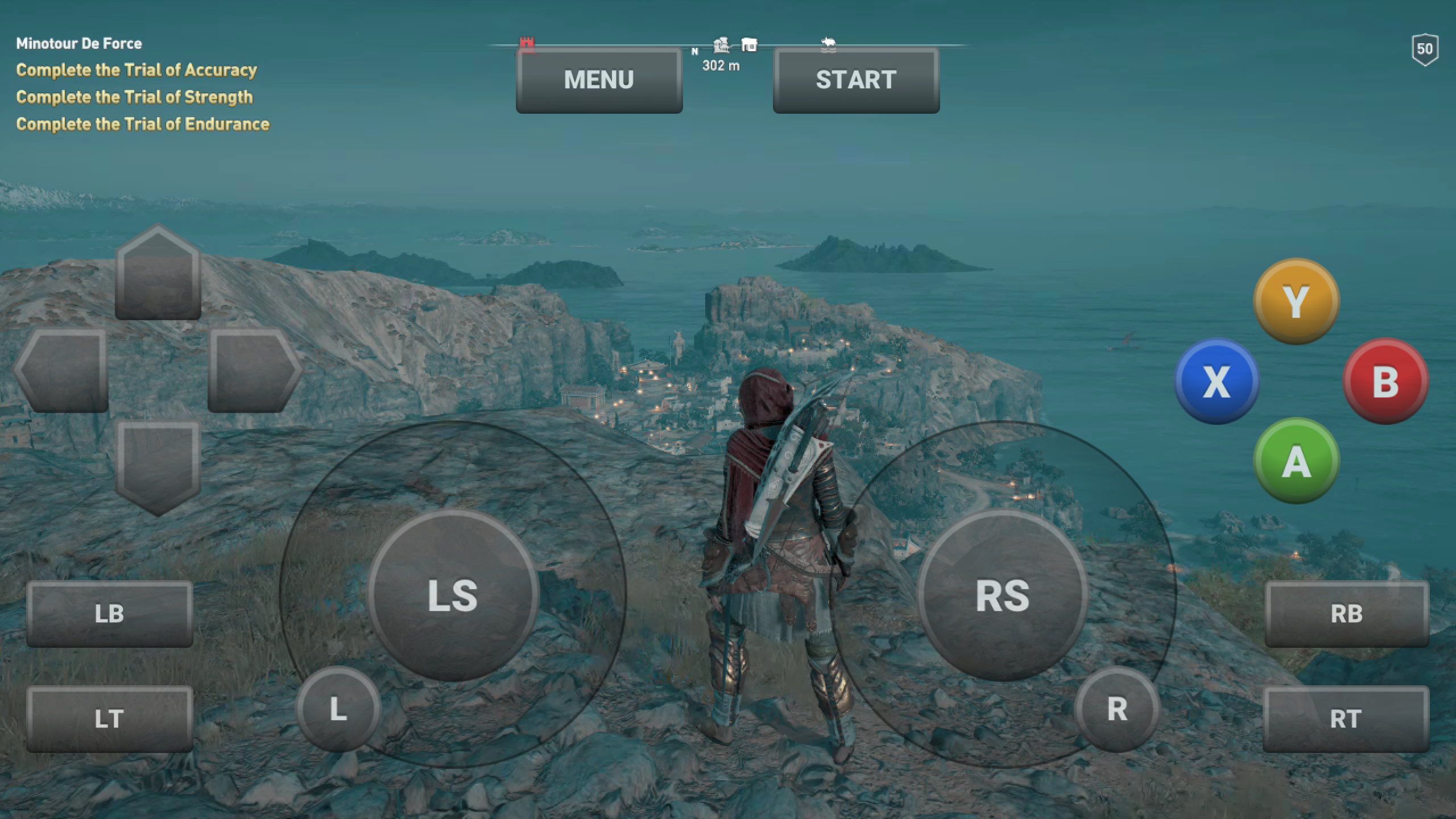 Yes, the onscreen controls are heinous, but thankfully you can get rid of them completely and use an external Bluetooth controller instead. This was captured on my own phone streaming at 720p at 10Mbps, so click to enlarge to have a look at the finer detail.

I’d be lying if I said it was completely perfect, though. Indeed, there were a few moments where the entire experience fell apart, the screen disintegrating into a blocky, juddering mess, but I can probably blame that on the preview venue’s dodgy Wi-Fi. Testing it at home with a preview build of the app, any blips in quality were few and far between, and the stream only took a second or two to recover when they did eventually rear their pixelated heads. Sure, you’re probably not going to use it for fast-paced competitive games, but for slower, more considered games like Assassin’s Creed (not to mention convenience’s sake), there’s definitely a lot of potential here.

AMD are aware there’s room for improvement, too. There’s currently no dynamic resolution feature to help maintain the stream quality if your connection suddenly goes a bit wobbly, for instance, but it’s something AMD told me they’re planning on adding in at a later date. At the moment, you can only set a fixed options for resolution, frame rate and bit rate, but at least there’s a built-in stream test option to help you get the right combination of settings.

AMD aren’t stopping at streaming to just phones and tablets, either. Adrenalin 2019 Edition also introduces game streaming to standalone VR headsets as well such as the Samsung Gear VR, Google Daydream, Vive Focus and Oculus Go. Right now, only Steam VR games are compatible with the service (up to resolutions of 1440×1440), but that’s still a mighty tempting proposition if you don’t have the cash (or the space) for full blown Rift or Vive headset and are sick to death of all the naff mobile experiences on offer with the current crop of standalone ones.

Unfortunately, the demo AMD had lined up at my preview session gave up the ghost before anyone could actually test it, so I can’t speak about how it actually performs just yet. However, provided it’s fast and stable enough not to make you throw-up every time you try to use it, this might just be the shot in the arm VR needs, especially if you’re one of the many hundreds and thousands out there with a Gear VR or Google Daydream that’s currently lost in a cupboard collecting dust.

Elsewhere in the 2019 Edition update, I’m also pleased to see AMD taking larger strides in simply making Adrenalin easier to use on a day-to-day basis. The first step is the introduction of three so-called ‘advisors’ to help you get the most out of its various settings options without getting bogged down in a million different menus, both in Adrenalin and the games themselves.

The first one is the Game Advisor, which can be found in the Radeon Overlay when you’re playing a game. This gives you personalised game settings guidance based on what’s inside your PC, and the idea is to tell you which quality settings you need to enable in order to get the best experience and fastest frame rates. You’ll still have to go in the game menu and find the appropriate quality settings yourself unfortunately, but it’s definitely a step in the right direction for those less confident about fiddling with a game’s quality presets. 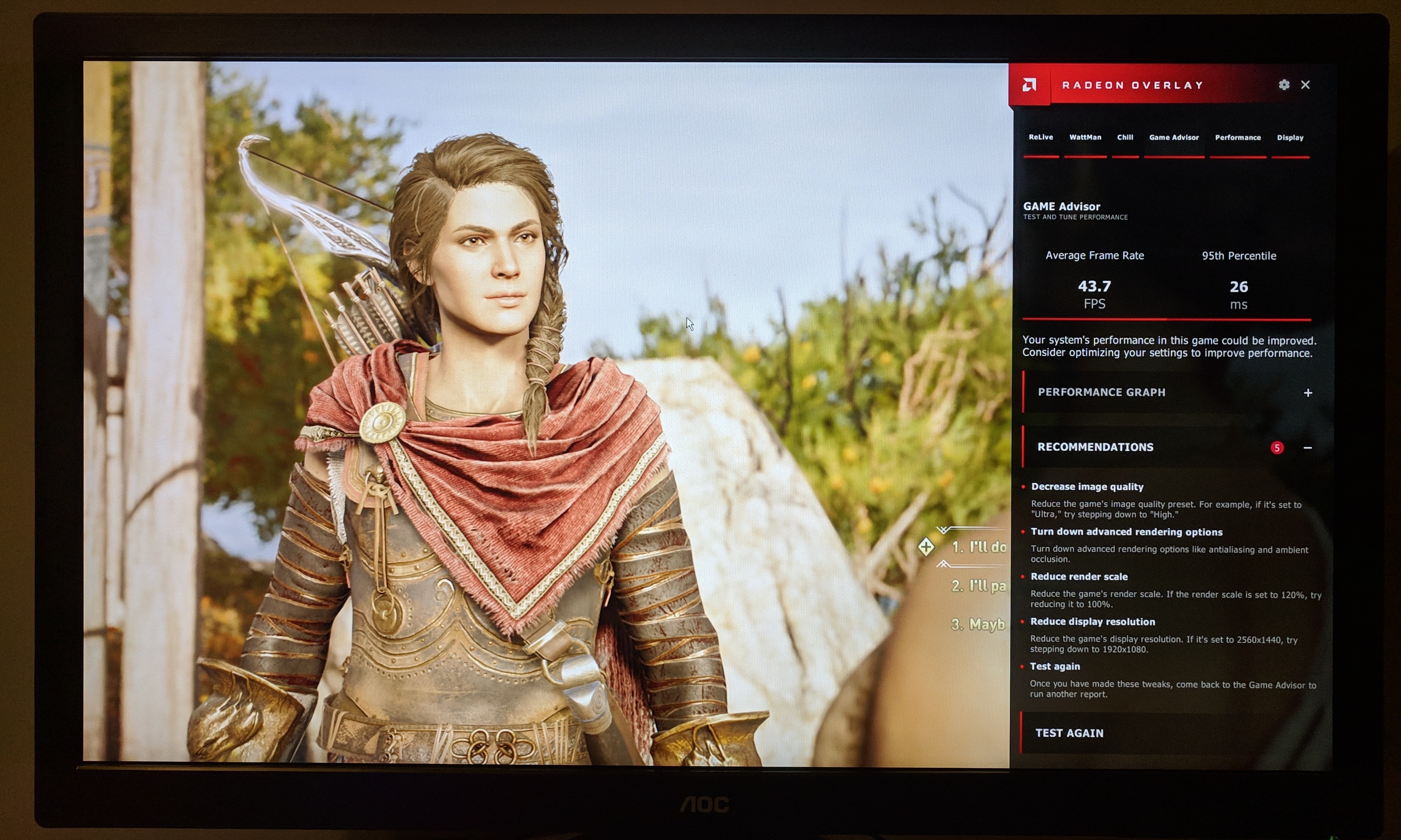 Excuse the phone photo, but this is what AMD’s Game Advisor looks like in practice. After running a 90 second performance test in-game, you’ll get a collapsible performance graph and a number of suggestions on how to get a higher frame rate.

The second is the Settings Advisor, which explains what Adrenalin itself actually does. Don’t know what UI or FreeSync actually mean, or if FreeSync is even turned on? The Settings Advisor will reveal all. It will also give you other recommendations you might want to try out to get the most out of AMD’s software tool, but you can always turn it off if you feel like you know your way around.

Lastly, there’s the Upgrade Advisor, which is also found in Adrenalin. This isn’t a new feature per se, but the 2019 Edition now lets you look at certain games in AMD’s database to see if your PC meets its minimum or recommended specification requirements. You can also use its dropdown menus to see which components do meet those requirements, which should hopefully make it a bit easier to identify what you actually need to buy when you next come to upgrade your PC.

Adrenalin 2019 also introduces one-click overclocking for more enthusiast PC peeps out there, allowing you to overclock (or indeed underclock to save energy if that kind of thing floats your boat) both your GPU and memory to get faster speeds using AMD’s Wattman feature. All without having to faff around in your PC’s BIOS settings. 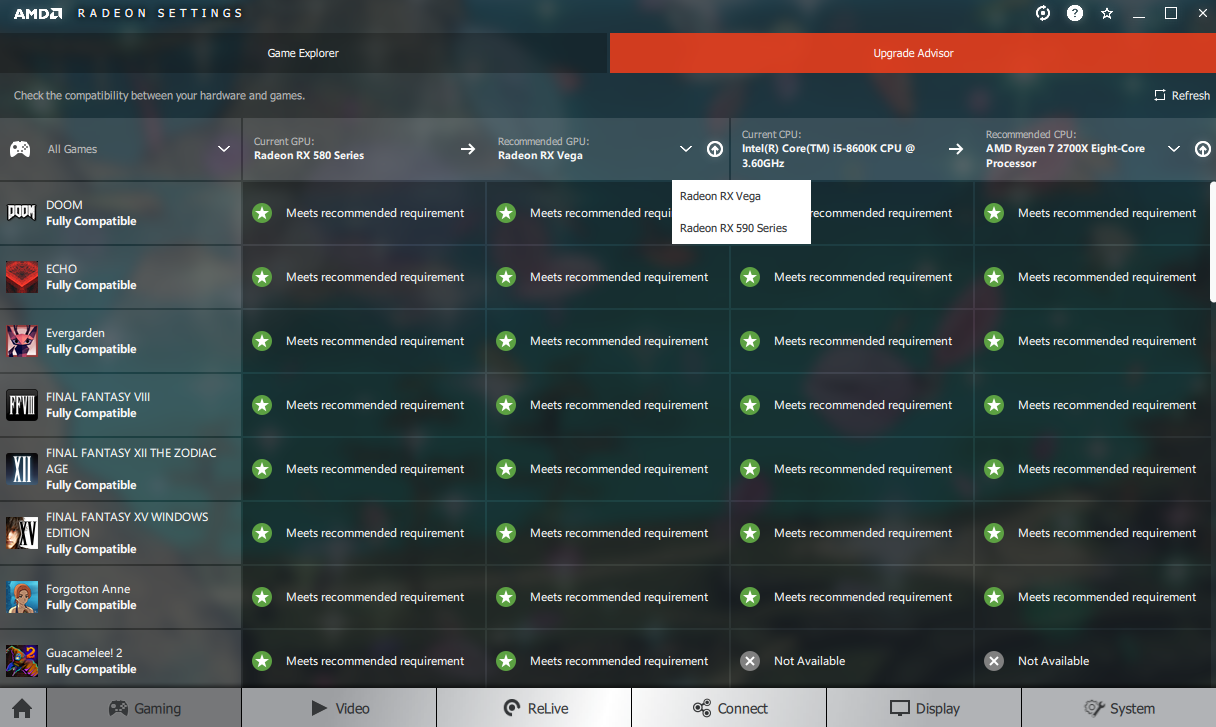 The Upgrade Advisor will only recommend AMD products (natch), but it should hopefully help to make it easier to understand where your PC’s under-performing.

Even if you aren’t fussed about overclocking, Adrenalin 2019 Edition will make your current graphics card run a teensy bit better anyway, simply by virtue of being updated. According to AMD’s own figures for the RX 570, for example, the new driver will make games run an average of 15% faster compared to when the first version of Adrenalin launched this time last year.

That figure will likely be a lot smaller if you’ve been keeping Adrenalin up to date over the intervening months, of course. Just from my initial tests with the new driver versus the most recent 18.12.1.1 version on PowerColor’s Radeon RX 580 Red Dragon GPU, Assassin’s Creed Odyssey ran between 0-2fps faster with the 2019 Edition installed across a variety of graphics settings at both 1080p and 1440p resolutions. It’s not going to blow your mind, then, but hey, I’ll take any kind of performance improvement where I can get it.

There are also a bunch more features in the 2019 Edition that are too numerous to list here, but additional brief highlights include: Radeon Chill can now deliver up to 20% more power savings on select games, FreeSync 2 HDR now supports auto tone-mapping for more detail in HDR-enabled games, AMD’s Virtual Super Resolution feature now does 21:9 displays as well, and the design of AMD’s Radeon Overlay has been updated with clearer performance metrics and instant GIF creation.

Phew. That was a lot to get through. Personally, I’m quite excited about AMD’s new streaming feature, and I’ll be putting through a more thorough test around the house over the coming days.