Nvidia’s performance-boosting DLSS tech arrived in Final Fantasy XV last week, allowing all three people who’ve actually bought themselves one of Nvidia’s new Turing RTX cards to finally start making use of what makes the GeForce RTX 2070, RTX 2080 and RTX 2080Ti so special. I’m still a bit miffed this fancy, AI-driven edge-smoothening magic only works at 4K at the moment, thereby making it even more niche and harder to use than FFVII’s Knights of the Round summon (a little joke for you there) but I do realise that this is the resolution that arguably needs it most. And after running some tests on the RTX 2080, the results are pretty encouraging.

You may recall that, before Nvidia and their partners got their act together and released some of the best RTX features into the wild, the RTX 2080’s raw performance was roughly on par with our current best graphics card for 4K champion, Nvidia’s GeForce GTX 1080Ti. A card that, until recently, was around a hundred smackers or so less than its RTX cousin, prompting widespread shoulder shrugging when it first came out. Why should anyone even consider buying one when it wasn’t actually that much faster?

Admittedly, that situation seems to have reversed at time of writing (perhaps due to the fact that we’re post-Black Friday and pre-Christmas sales) but the fact remains that there weren’t many compelling reasons to choose the RTX 2080 when it first came out a couple of months ago. Until now. Sort of. As long as you like Final Fantasy XV and have a 4K monitor.

As you can see from the graph below, which takes the average frame rate I recorded at each quality setting for the GTX 1080Ti and RTX 2080 both with and without all of Nvidia’s fancy extra effects turned on while running up and down the hills of Duscae (which is more demanding than the opening desert area, by the way), DLSS offers a significant jump in performance across the board – often between 10-15fps overall. 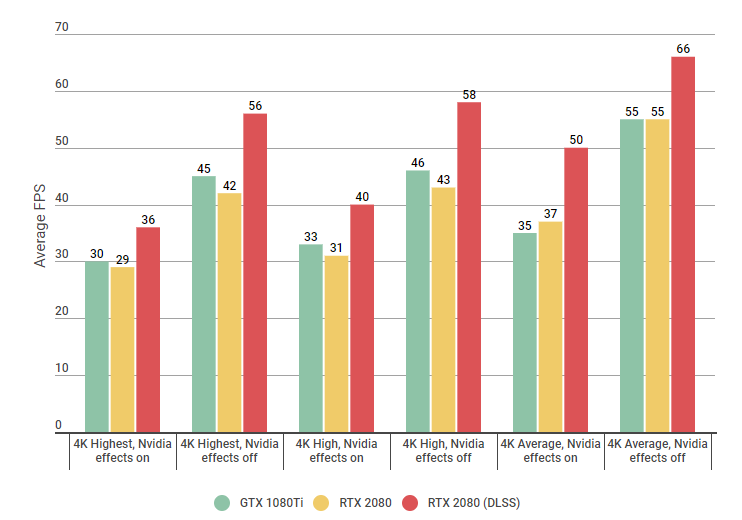 There are, of course, a couple of places where the gains are less keenly felt. Final Fantasy XV’s Highest preset with all of Nvidia’s TurfEffects, HairWorks, ShadowLibs and taxing VXAO enabled showed the smallest leap in performance, for example (just 6-7fps), and High with all the above effects turned on wasn’t much better either, edging just 7-9fps in front of its non-DLSS competition.

However, even in these more modest improvements, DLSS is utterly transformative. It may not be a silky smooth 60fps, but it pushes the game’s performance just high enough to turn it from a stuttering, occasionally sub-30fps mess into a much more pleasant 35-40fps romp across FFXV’s lush hills and countryside.

Indeed, the default TAA anti-aliasing option on these presets saw lows of around 19fps on Highest and 26fps on High when Noctis performed his warp dash move to strike enemies from across the battlefield. But switching on DLSS meant that figure never went below 30fps. And that’s even when there were dozens of enemies onscreen, which is pretty impressive if you ask me.

I didn’t really notice that much of a drop in overall quality, either. If you look hard enough at the trees and mountains in the background of the pictures below, you might be able to see that one looks slightly smoother and less detailed than the other. The trees are a little less defined, and the mountain textures aren’t quite as sharp and gritty. 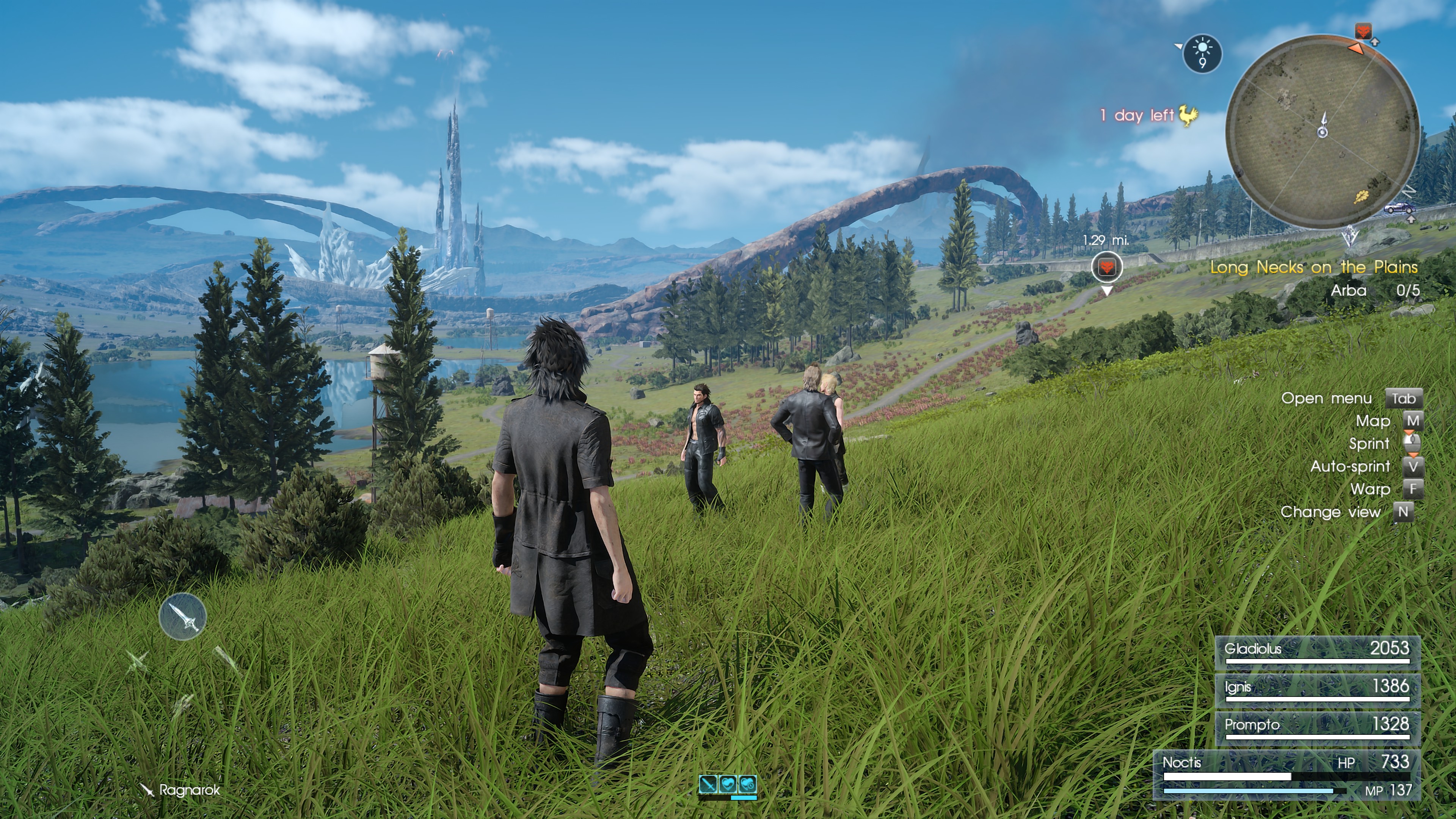 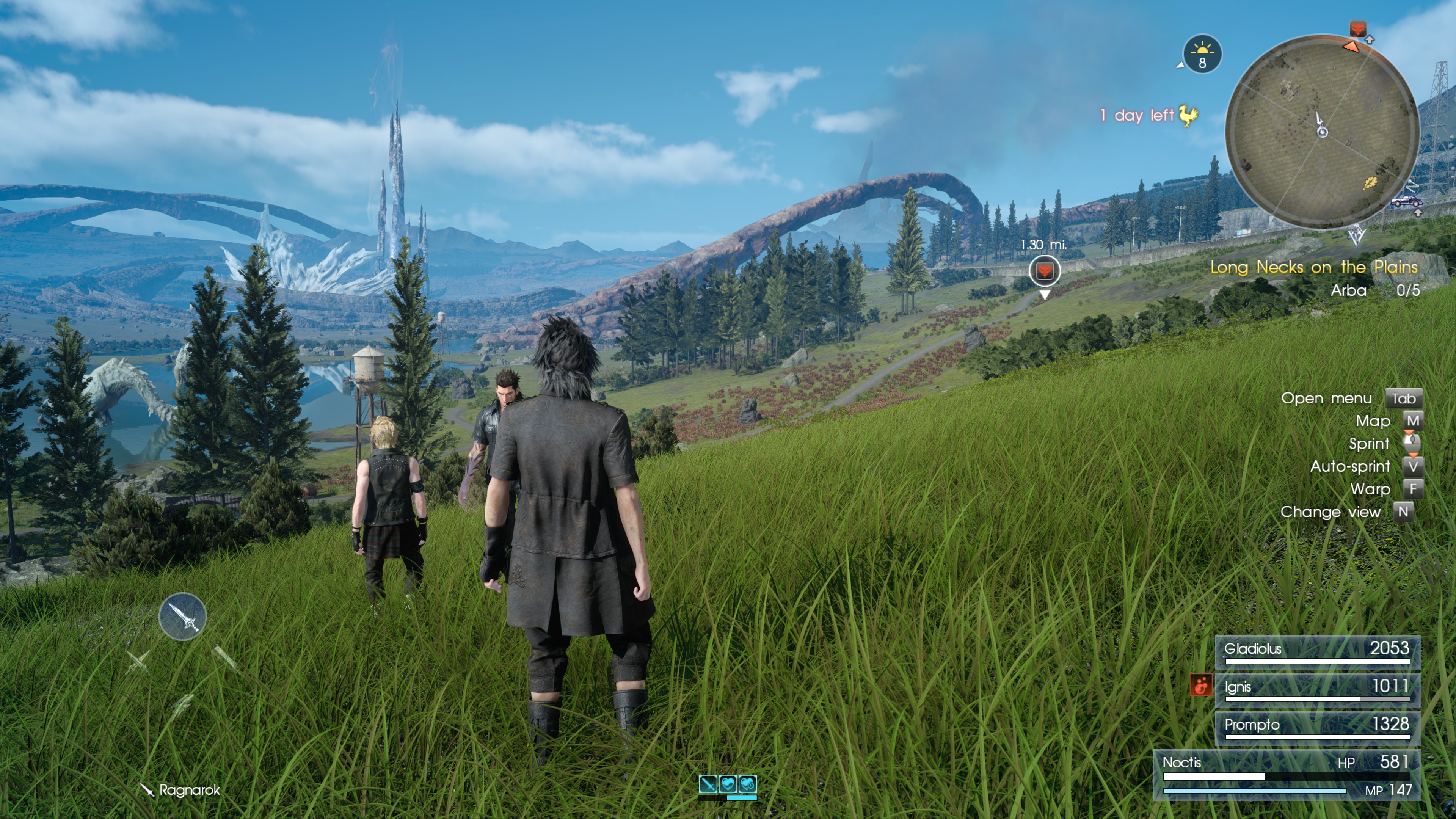 I also spied a very occasional bit of flickering going on in said rockface as Nvidia’s AI stuff tried to work out which bits were rock and which bits were meant to be trees when I was stood still trying to capture these screenshots, but in motion it was pretty flawless. After all, most of the time I was focusing on Noctis and co in the foreground, so any loss of background detail didn’t really bother me that much, and every jacket crease and blade of TurfEffect grass still looked just as sharp and detailed as it did with DLSS turned off.

Of course, these are only the results for the RTX 2080. I’ve yet to see how much of a difference DLSS makes on the cheaper RTX 2070, for example, and I’m waiting for one to wing its way back to me for further testing. As a single GPU for 4K gaming, though, the RTX 2080 certainly looks a lot more tempting than it did a couple of months ago – at least if you’re a diehard Final Fantasy XV fan who’s itching to play the game at 4K, that is.

Still, if DLSS can deliver this kind of performance boost in every game earmarked for future DLSS support, then this is a very promising start indeed (and there are significantly more of these than those currently confirmed to be taking advantage of Nvidia’s headline ray-tracing reflection tech, I might add). Especially if graphics card prices continue to be in the RTX 2080’s favour. I’m not saying you should all rush out and buy an RTX 2080 right now, of course, but if DLSS means I can theoretically play Final Fantasy XV on Highest at 4K at a comfortable frame rate without shelling out another £600-700 / $500-600 on the considerably more powerful 4K monster that is the RTX 2080Ti, then consider my interest well and truly piqued.