Did you know that the way our ears interpret sound is as unique and personal to you as your own speaking voice? I certainly didn’t until earlier this week, but it’s probably the reason why no one can ever agree on what the best headset is, or why one pair of headphones might sound great for one person but all kinds of rubbish to someone else.

The audio wizards over at Australian firm Nura, however, have struck upon an idea that uses this ear science magic to their advantage. Enter the Nuraphone, a pair of headphones that measures exactly how you hear things and creates your own personalised audio signature off the back of it, ensuring that games and music are perfectly tuned to your own ear drums. It sounds bonkers and something like pure witchcraft if you ask me, but by golly does it work.

It’s a funny looking thing, the Nuraphone. Even by normal headphone standards, I’ve never seen a pair of over-ear jobs that also have in-ear-like ear buds sticking out of them. Indeed, my husband and RPS vid bud Matthew was a little unnerved by them to him for the first time. “There’s something about them that looks like an Alien facehugger,” he said. 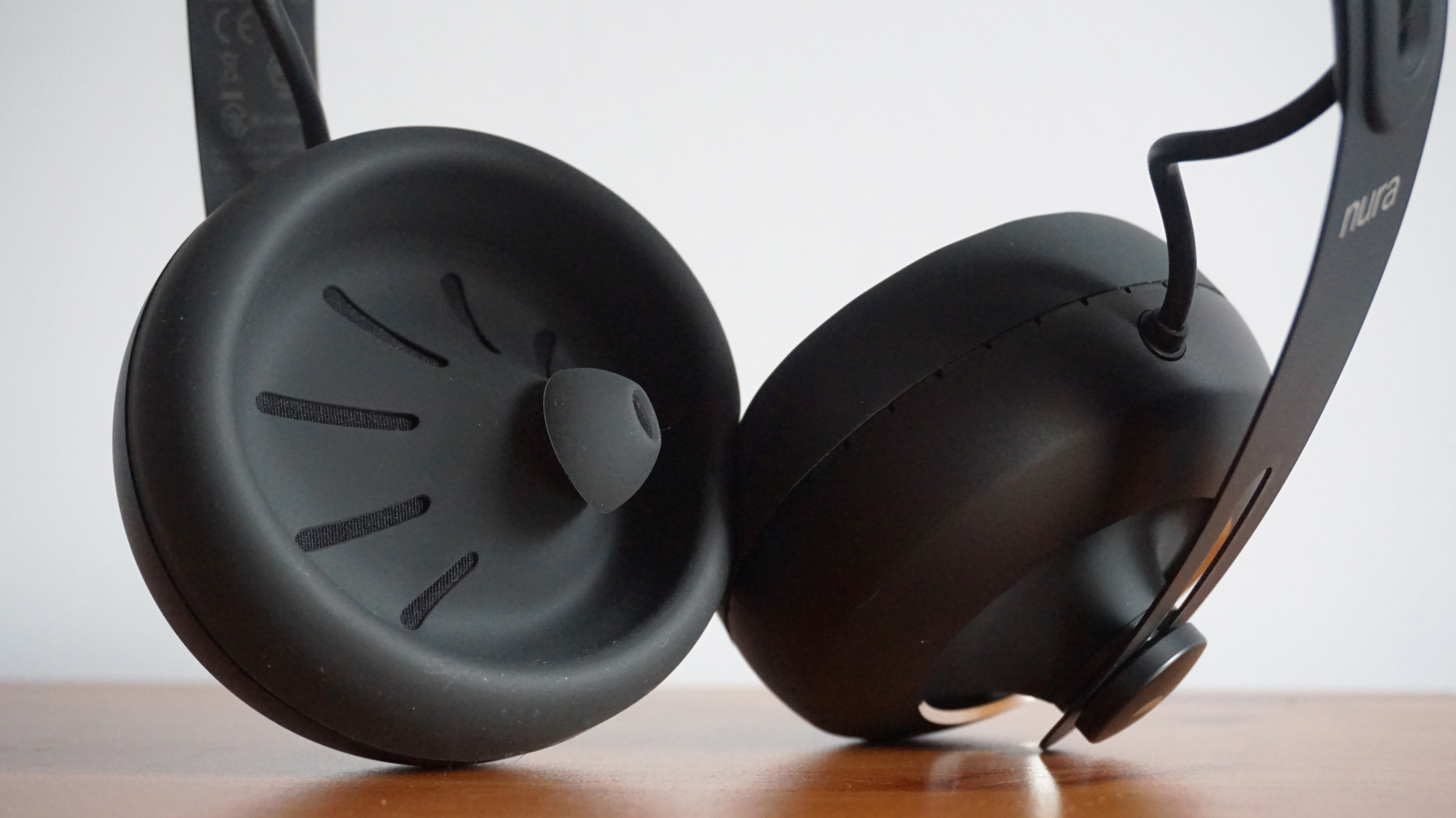 I can see where he’s coming from (perhaps it’s the perforated lines inside the soft-touch ear cups that do it), and I must admit, it’s a strange sensation when you’ve actually got it on. Still, when you’ve spent as much time commuting and listening to music with in-ear headphones as I have over the years, you quickly get used to it. Indeed, the reason Nura’s gone for this kind of design is two-fold. Firstly, it allows the headphone to separate out the bass and mid-to-high tones more effectively, creating a more detailed soundscape that lets you feel the bass on your face (especially when you crank up its bass-boosting ‘immersion’ mode) while the melodies and such are plumbed straight down your ear canal.

It also lets the Nuraphone perform its personalised audio magic. Apparently, according to ear scientists who know a lot about this sort of thing, your ears make their own unique noises when they respond to sound, something experts call otoacoustic emission. It’s only a very teeny tiny sound, but the Nuraphone has a very sensitive microphone built into it that can work out how we all listen to stuff.

You’ll need to download the Nuraphone app on your Android or iOS phone to set it up, but the whole process only takes about a minute in total. You simply put the Nuraphone on your head (it turns on automatically when you put it on and off again when you remove it), connect it to your phone via Bluetooth and wait for the app to do its thing – that is, send a bunch of soundwaves down your ear holes, record the soundwave that comes back from your ear drum and then use its clever self-learning engine to create your own personalised audio profile. Once it’s all set up to your liking, there’s no need to open the app ever again if you don’t want to.

I can’t tell you what my resulting pink and blue blob profile actually means – a little more information on the actual results would be both interesting and useful to know – but as you can see below, it’s noticeably quite different to the pink and blue blob Matthew got when I enlisted him as a second test subject. I’ll admit to being quite sceptical about how it would all work at first, but when I tried listening to both of them one after the other, I was really quite impressed by how different they both were. When I booted up my Final Fantasy XV soundtrack, for example, I could hear a lot more percussion detail in Matthew’s profile than I could in mine (hi-hat cymbals in particular were really distinct), but strings also sounded thinner and limper, probably because he hears those things differently to how I do. 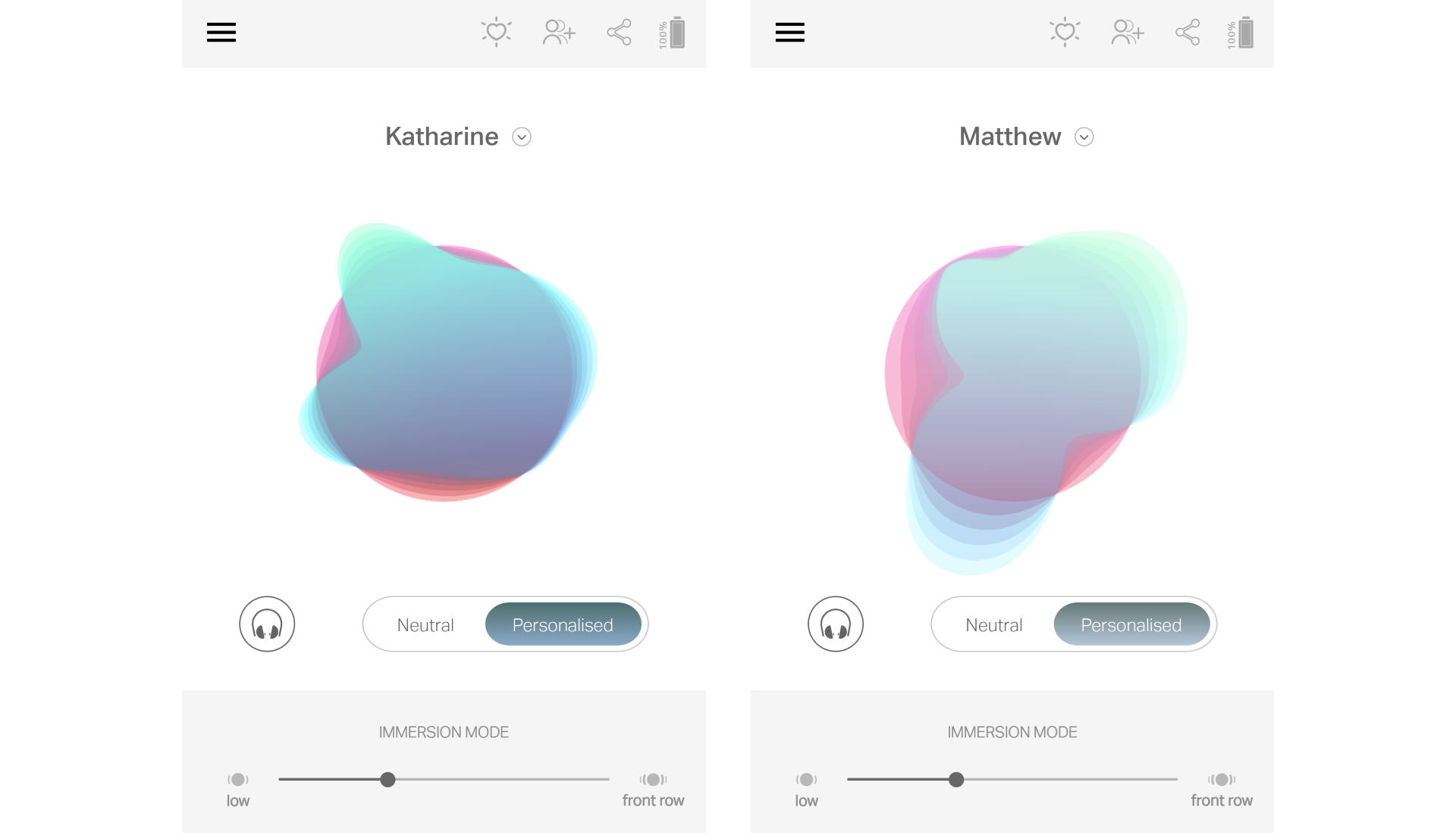 It would have been great to get a little more feedback on what your hearing profile actually means, but I’m surprised how different my hearing is to Matthew’s.

I have no idea how it does it, but whatever’s going on behind the scenes to make each profile so different, it’s clearly working – and it sounds pretty damn excellent. For me, my FFXV soundtrack sounded wonderfully warm and detailed, both in busy orchestral tracks and quieter piano segments, while rock and pop tracks had lovely clear vocals that were perfectly balanced against their backing instruments.

The Nuraphone worked well as a pair of gaming headphones, too (more on that in a minute), but you do end up losing some of its nifty Bluetooth functionality by plugging it into your PC via its bundled USB charging cable. For instance, you can actually assign various controls to each little circular Nura logo on the ear cups, such as shifting the volume up and down, skipping to the next track or playing/pausing your music, but the touch buttons only work when you’re connected over Bluetooth and don’t have any cables attached.

To be honest, aside from the volume controls, I can probably live without the controls I’ve just mentioned above while playing on PC. The thing I really miss, though, is the Nuraphone’s social mode. Due to the in-ear/over-ear design of the headphone, its natural (and proper active) noise cancellation is actually pretty impressive. For instance, I can barely hear myself type or hear whether the cats are rushing up and down the hallway like maniacs when I’ve got the Nuraphone on, and that’s great. When I’m playing games, that means a better quality sound that isn’t being interrupted by the clack clack clacking of my mechanical keyboard. 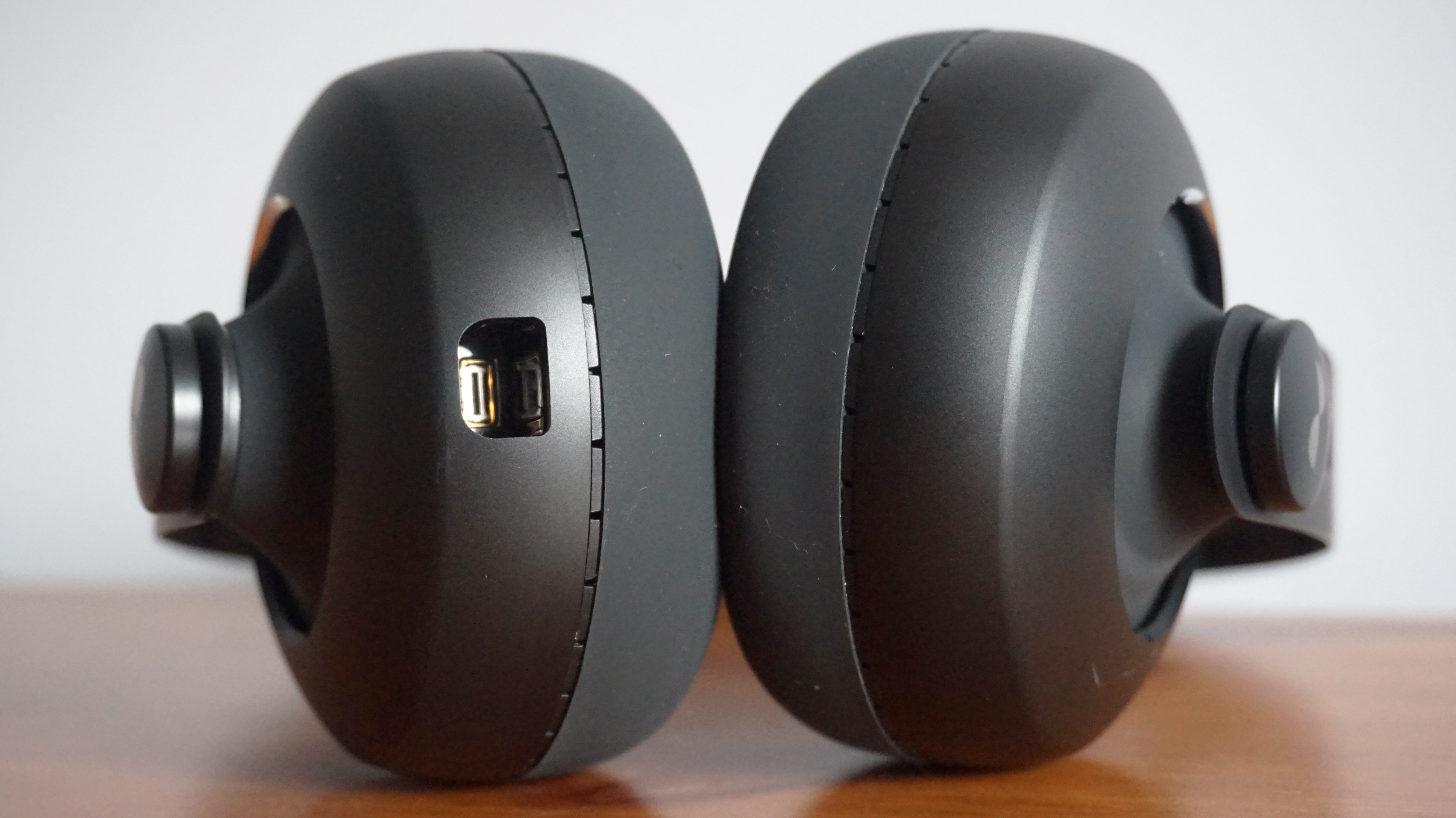 It’s a shame the touch buttons on the side don’t work when you’ve got the Nuraphone plugged in, but at least you still get a spoken battery status every time you put them on.

When I need to chat to Matthew or answer a question, however, the Nuraphone’s social mode means I can switch on its external microphone and hear everything that’s going on around me with perfect clarity. Handy, when you consider that the Nuraphone actually turns itself off every time you remove from your head. The social mode’s not only convenient, but it also saves time, as you don’t have to wait around for the Nuraphone to turn itself back on again, which in my experience takes around 10 seconds.

It’s possible this may get fixed in a future software update, of course. Nura’s co-founder and CEO Dragan Petrovic has already assured me that they’re working on more software updates to enable and improve more of the features that are already packed into the Nuraphone, for example, but right now, it feels like there’s still more work to be done before the Nuraphone becomes the ultimate pair of gaming headphones.

Still, I liked what I heard when I booted up my suite of test games. Doom’s bass-heavy soundtrack thumped and walloped along inside my ears without ever feeling like it was overpowering the finer details of each demon’s death rattle or the crack of their skulls as I pumped them full of shotgun shells, and I was able to clearly identify where any last stragglers were thanks to the way it shifted each cry around each ear cup. There was something about the Super Shotgun blast that felt a teensy bit tinny perhaps, but on the whole the Nuraphone produced a deep, immersive sound that really drew me into each and every firefight.

The Nuraphone also handled Hellblade’s binaural audio brilliantly. I was able to place each and every voice whispering and snickering inside Senua’s head, and the ominous, underlying soundtrack was rich with detail and a foreboding sense of menace. Again, there was something slightly bit off about the timbre of the main narrator’s voice, as if it was a little airy and clinical compared to other gaming headsets I’ve worn, but it wasn’t enough to really bother me in the grand scheme of things. 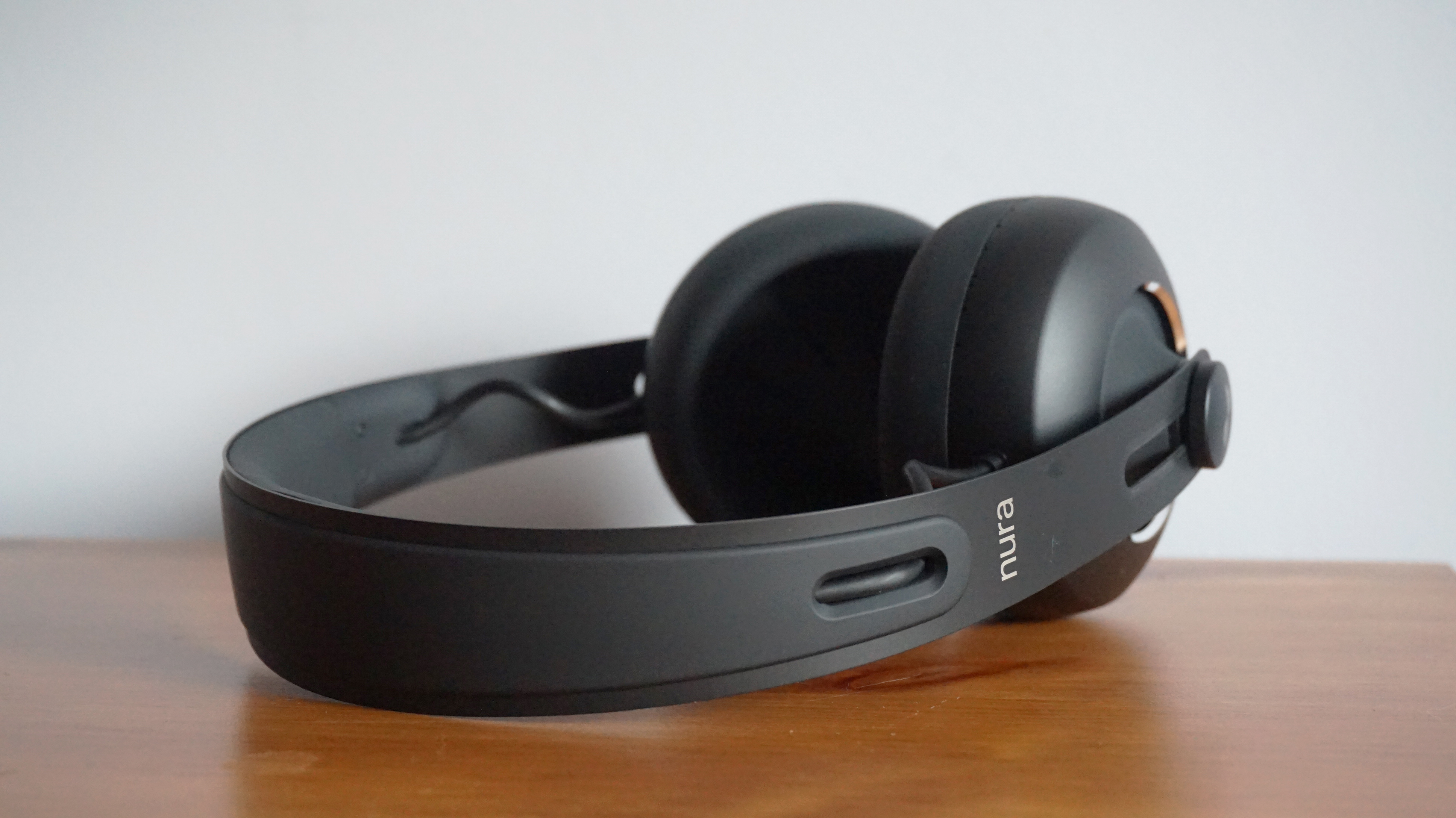 As for Final Fantasy XV proper, its sweeping orchestral score sounded superb, both in the heat of battle with Noctis and co zipping and zapping across the battlefield and in its quieter, more leisurely moments of exploration.

I was also surprised by how comfortable the Nuraphone was over long periods of time. I was convinced its soft-touch rubbery headband was going to give me a massive case of the old head pinch when I first got it out of the box, but I found I was able to wear it practically all day without any problem.

You’ll also notice the ear cups have tiny little holes in them round the edge. This lets the headphone pull in cold air from your surroundings to help keep your ears nice and cool, making the Nuraphone even comfier to wear for several hours at a time. It’s nowhere near as extreme as the HP Omen Mindframe’s cooling mechanisms, but I never once felt like my face was getting hot and sweaty while I was wearing them.

The thing is, as much as I like how the Nuraphone sounds with regular music – something gaming headsets tend to struggle with – I’m just not convinced they’re actually any better for specifically playing PC games with than, say, the Steelseries Arctis 7 or the Corsair Void Pro RGB, especially when a pair will set you back £349 in the UK and $399 in the US. 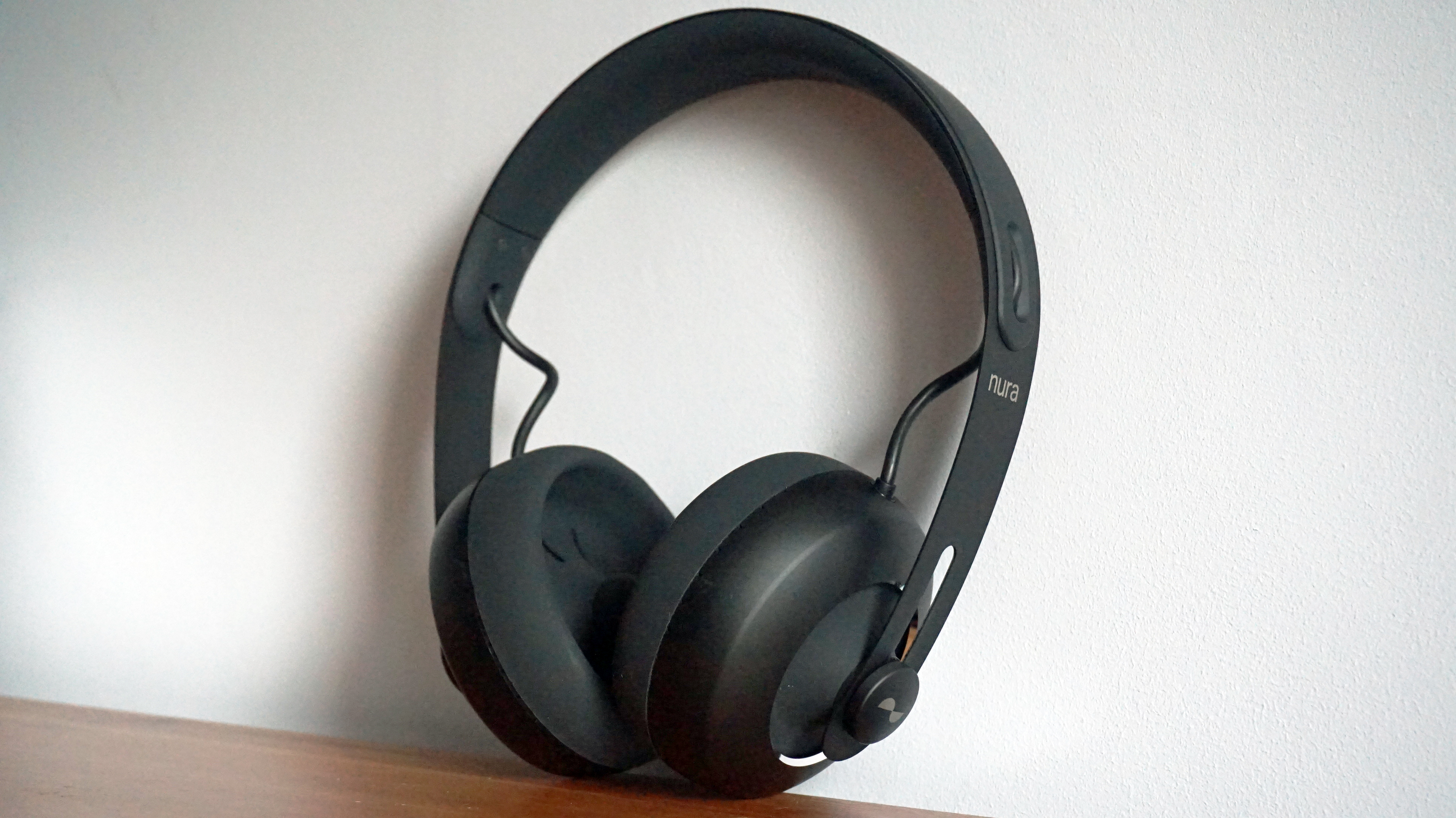 That’s a lot of cash for a pair of gaming headphones, no matter what kind of tech it’s got inside it, and the fact I still noticed a couple of minor niggles with some of my test games just makes me even more apprehensive about spending so much money on them. Throw in the fact you can’t use all of its features when it’s connected to your PC (unless your system happens to have some kind of Bluetooth receiver in it, that is), and the Nuraphone becomes an even tougher sell.

There’s plenty to like here if you have the cash and you’re the type of person who’s always struggled to find a pair of headphones you like – after all, its personalisation tech is really quite impressive and absolutely brilliant for regular music. But looking at the Nuraphone from a purely PC gaming perspective, I think there’s room for improvement. I’d like to be able to make full use of its side buttons when playing on PC, for example, as well as have the option to play around with its bass-enhancing ‘immersion’ mode on the fly instead of making do with whatever settings I last used on the phone app. The Nuraphone’s a hugely impressive bit of audio magic, but for me there are plenty of cheaper headsets out there that make for equally great game listening.