When it comes to bonkers gaming laptops, you can always rely on Acer to go that extra mile and create something that’s utterly bananas. For as long as I’ve been writing about tech (and gaming laptops in particular), this Taiwanese giant has been responsible for almost every surprise and baffling bit of innovation I’ve encountered over the years, and their latest Predator Triton 900 laptop is no exception.

Originating from the same family tree as Acer’s ill-fated Aspire R7 from late 2013, the Predator Triton 900 serves no logical purpose. On paper, it sounds like your typical high-end gaming laptop: an Nvidia GeForce RTX 2080 graphics chip in its newly-announced energy efficient Max-Q design, a 17.3in IPS display with a 4K resolution and Nvidia G-Sync support, an 8th Gen Intel Coffee Lake Core i7 CPU and up to 32GB of RAM. That’s all pretty standard.

In the flesh, however, the Triton 900 is anything but. It’s a huge great thing, weighing a palpable 3.4kg that makes Acer’s ‘Summon Your Strength’ slogan (see below) feel comically straight-faced when you try and pick it up, and it’s made even bulkier by the two supporting arms that hug either side of its rotating screen. That’s right. Give the screen a little shove, and it will flip almost a full 180 degrees on its so-called ‘Ezel Aero Hinge’ (Ezel being the same name given to Acer’s aforementioned R7 laptop that I really quite liked back in the day despite its wonderfully stupid design). 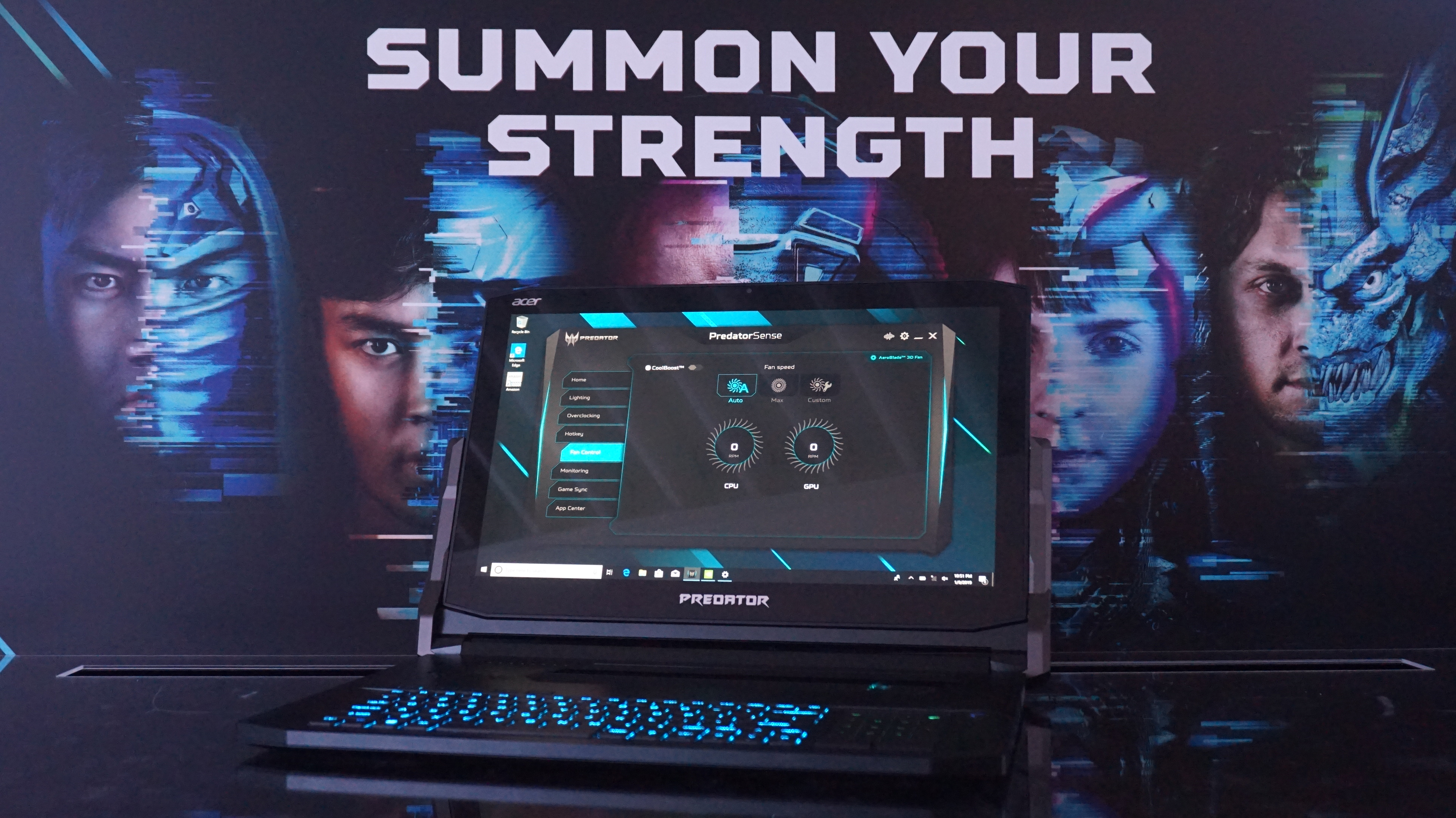 It’s a ridiculous piece of technology and yet, just like the R7, I actually kind of dig it. Never in a million years will I flip its screen round to show other people what I’m looking at or tuck the keyboard away so I can use it as a tiny, makeshift TV along with its flip-out Xbox wireless receiver (a glorified USB port in practice). Nope, nuh uh, nadda. But it’s nice to have the option.

I’ll also never fold its 4K touchscreen down flat and use it like a ginormous tablet or cover up its windowed heat pipe by bringing the screen forward slightly when using it like a normal laptop. But hot damn if I don’t admire the heck out of Acer for including it anyway. Sure, it’s no Predator 21 X, which had a mad curved ultrawide screen display and dual GTX 1080s inside it, but it’s pretty darn close. 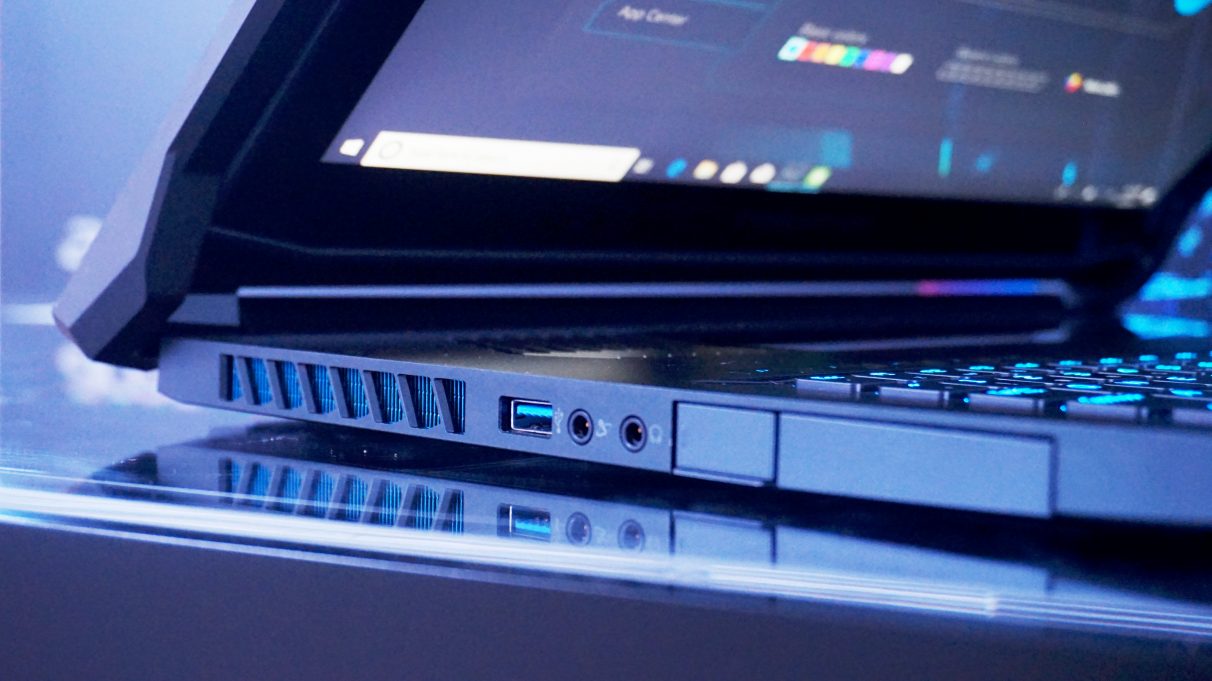 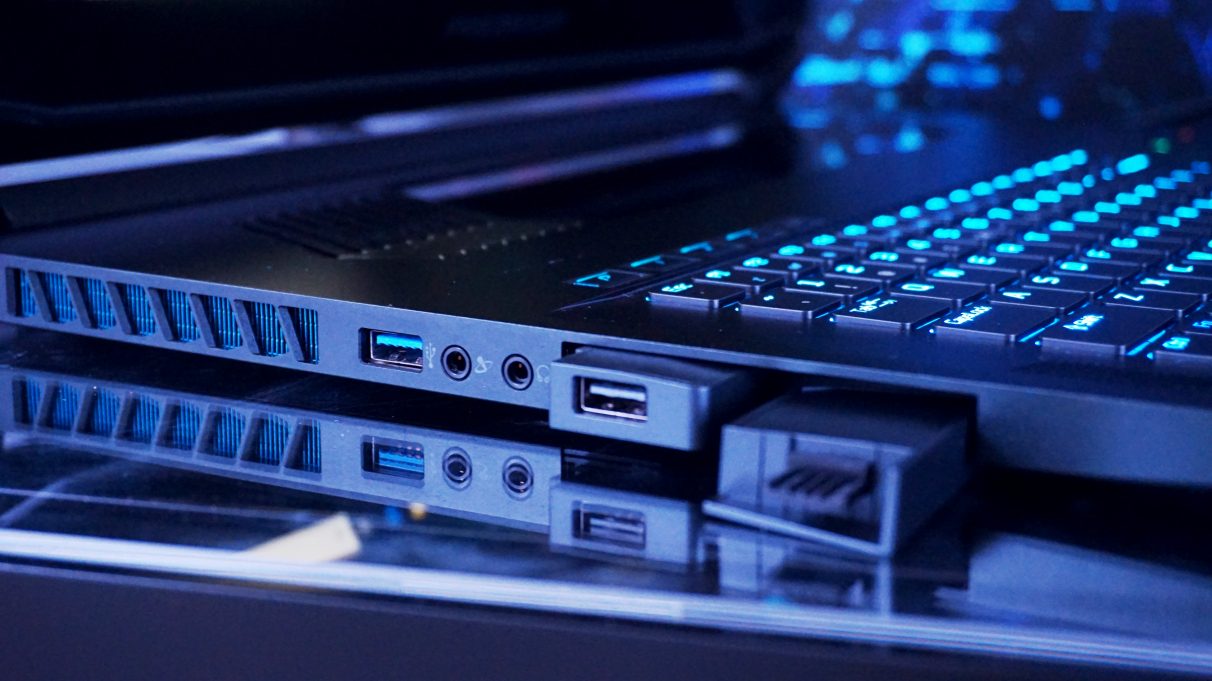 However there’s a secret USB port you can flip out from beneath the laptop to use with wireless Xbox controllers. Surprise!

It’s “daringly designed”, as one Acer representative told me when I saw it in person earlier today, but I kind of love it for that. After countless thin and light gaming laptops and even greater numbers of giant chunkers at this year’s CES, the Triton 900 is wonderfully refreshing. After all, it’s still got all the high-end gaming credentials you’d expect, including a mechanical keyboard, per-key RGB lighting, and various overclocking options in addition to all the components listed above, and it even comes with a pretty decent bunch of ports.

Its smooth touchpad also doubles as a number pad, which was surprisingly responsive in practice when I tried it out for myself. Similarly, its Predator Sense software gives you umpteen different options to get the best performance out of your Triton 900 without having to faff around with its various BIOS settings, which is always a plus in my books. 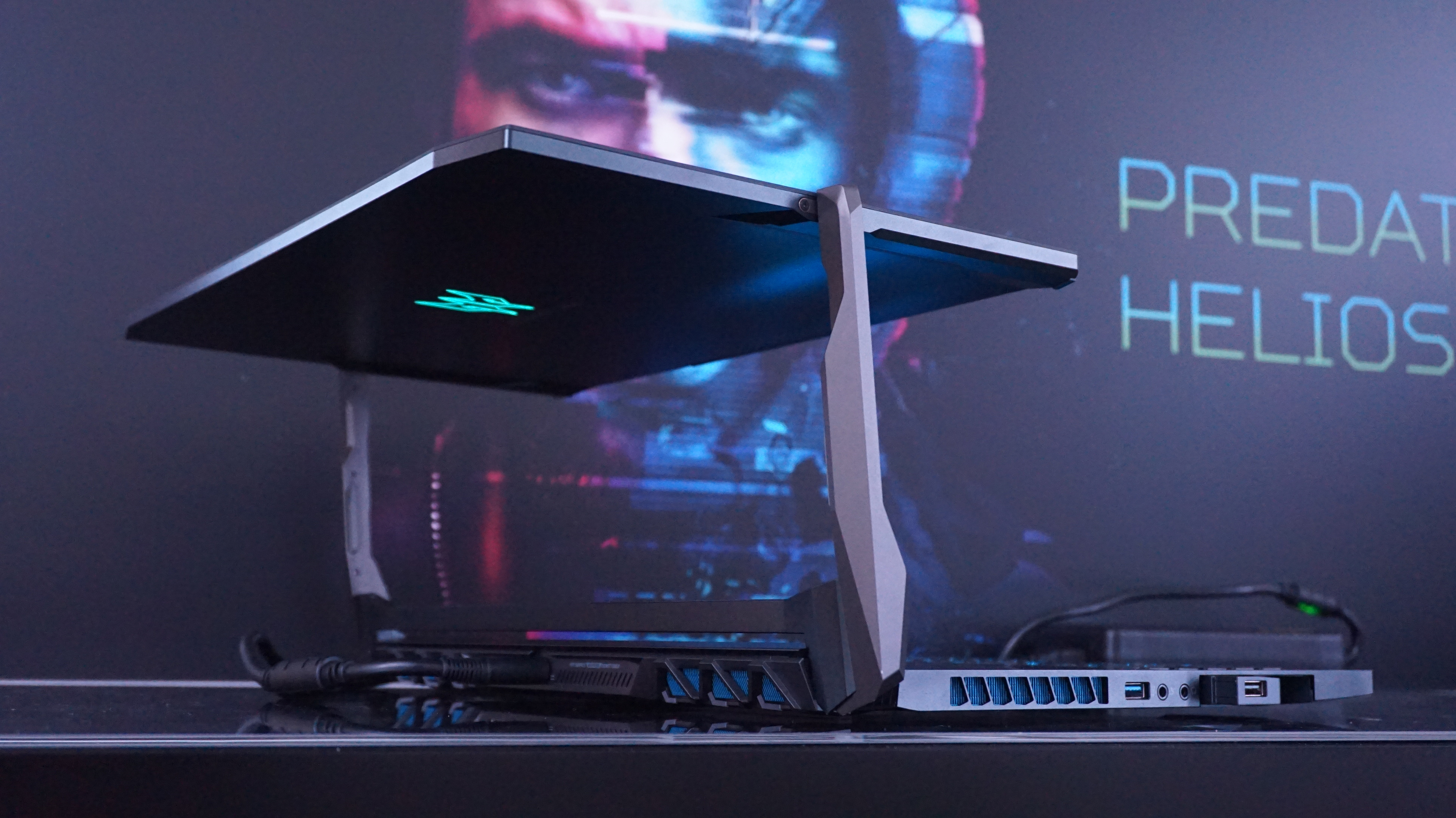 The Triton’s Ezel Aero Hinge isn’t as sturdy as the R7’s, as the sheer weight of the screen often saw it slide out of position after just a few moments use.

Its 4K IPS display certainly looked the part of a high-end laptop, too, its glossy finish helping to accentuate colours despite catching every reflection in the room. I’ll have to wait and see how it holds up under my calibrator when I get one in for testing (and you can bet I’ll do my absolute darndest to get one in, too), but first impressions are certainly quite promising.

Admittedly, the only thing that really put me off the Triton 900 was the keyboard. Despite Acer’s claims that it’s a proper mechanical affair with all the clicks and clacks you could possibly want, it could have done with a bit more travel in my opinion, as well as a bit more tactile feedback. 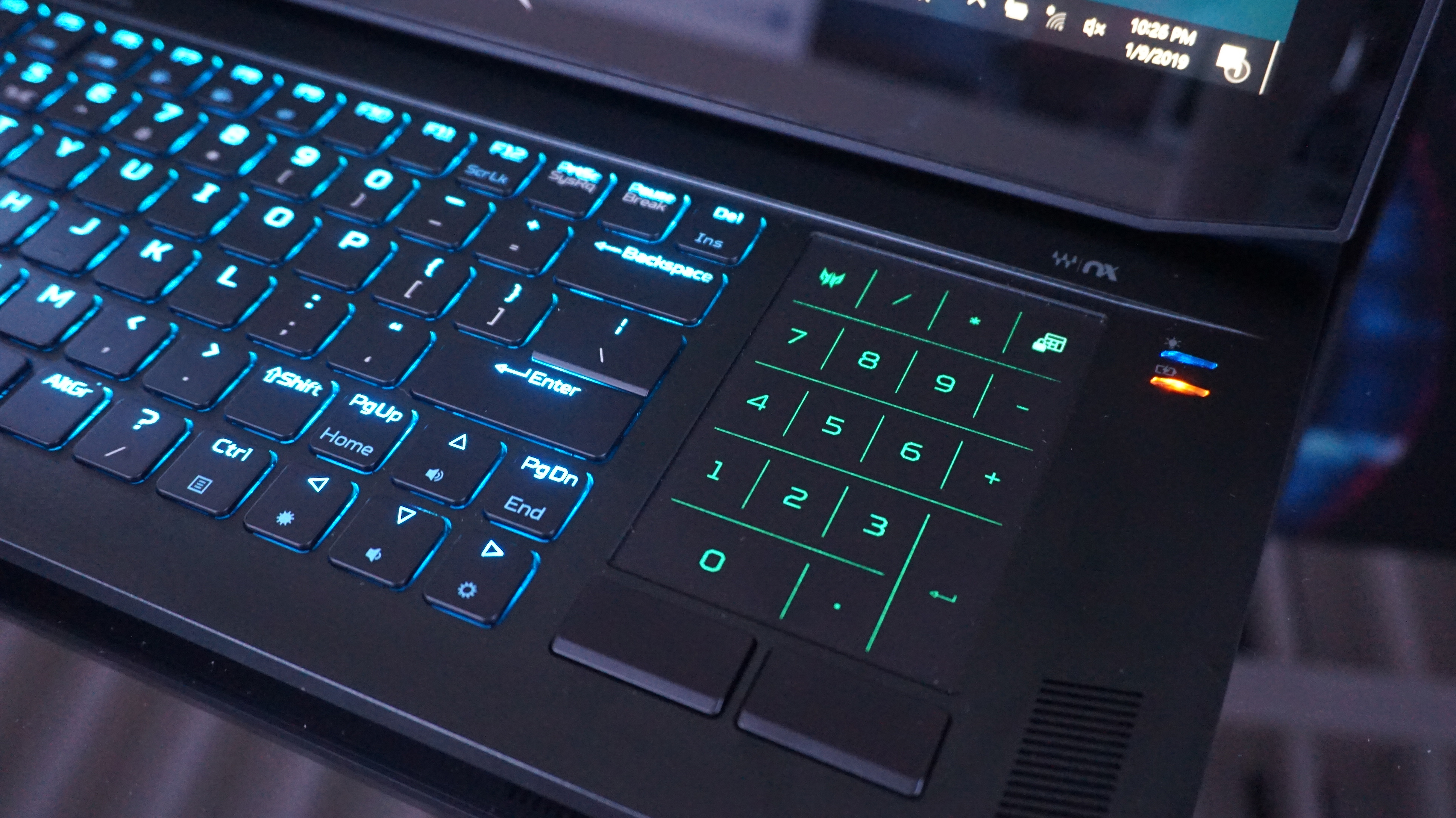 Ultimately, it could have been any old laptop keyboard as far as I was concerned, and I infinitely preferred the keys on Acer’s other new laptop for CES 2019, the Triton 500 (a full hands on review of which will be up in the next day or so). Still, it would be churlish to dismiss the Triton 900 on these grounds alone without further testing, and I look forward to putting it through its proper paces very soon.

Such heady brilliance doesn’t come cheap, however, as Acer have said the Triton 900 will cost around €4199 when it launches sometime this February / March time, putting it well out of reach of all but the most foolhardy of laptop buyers. In all honesty, I’m not really sure why the Predator Triton 900 exists, but I’m glad it does nevertheless. It’s a silly thing that maybe three people will buy and likely instantly regret, but at least it’s a bit different from all the other gaming laptops you can buy at the moment, and that, my friends, is something worth celebrating.