Nvidia’s RTX 2060 may have dominated most of the graphics card headlines at this year’s CES, but down on the show floor you simply can’t move for RTX gaming laptops. Chief among them is MSI’s new GS75 Stealth, which has been shoved in my face at no fewer than three separate appointments I’ve been to in the last two days. This is mostly because it’s the world’s first 17in thin and light gaming laptop with an RTX 2080 inside it (albeit in Nvidia’s energy-efficient Max-Q design rather than a full-fat laptop chip), but is bigger necessarily better? Here’s wot I think so far.

From the outside, the MS75 Stealth is surprisingly low-key considering MSI’s penchant for blazing lights and go-faster gaming stripes. Aside from a golden metal trim around the laptop’s outer edges and a similarly coloured dragon logo on the back of the lid, this black, 18.95mm thick slab could easily be mistaken for a normal, if rather large and fingerprint prone, ultraportable laptop – which is pretty refreshing after the monstrously huge Acer Predator Triton 900 I looked at yesterday.

Open it up, however, and its gaming credentials hit you right in the face almost straight away. Not only does it have a rainbow-emblazoned keyboard from Steelseries sitting under the hood, but there’s also a prominent Geforce RTX sticker next to its huge, rectangular track pad.The per-key RGB lighting can, of course, be turned off or adjusted to something a bit more sedate if you prefer, but there’s no escaping the angular, sci-fi-esque font that’s stamped onto each and every one of its full-sized key caps. Oh well. You win some, you lose some. 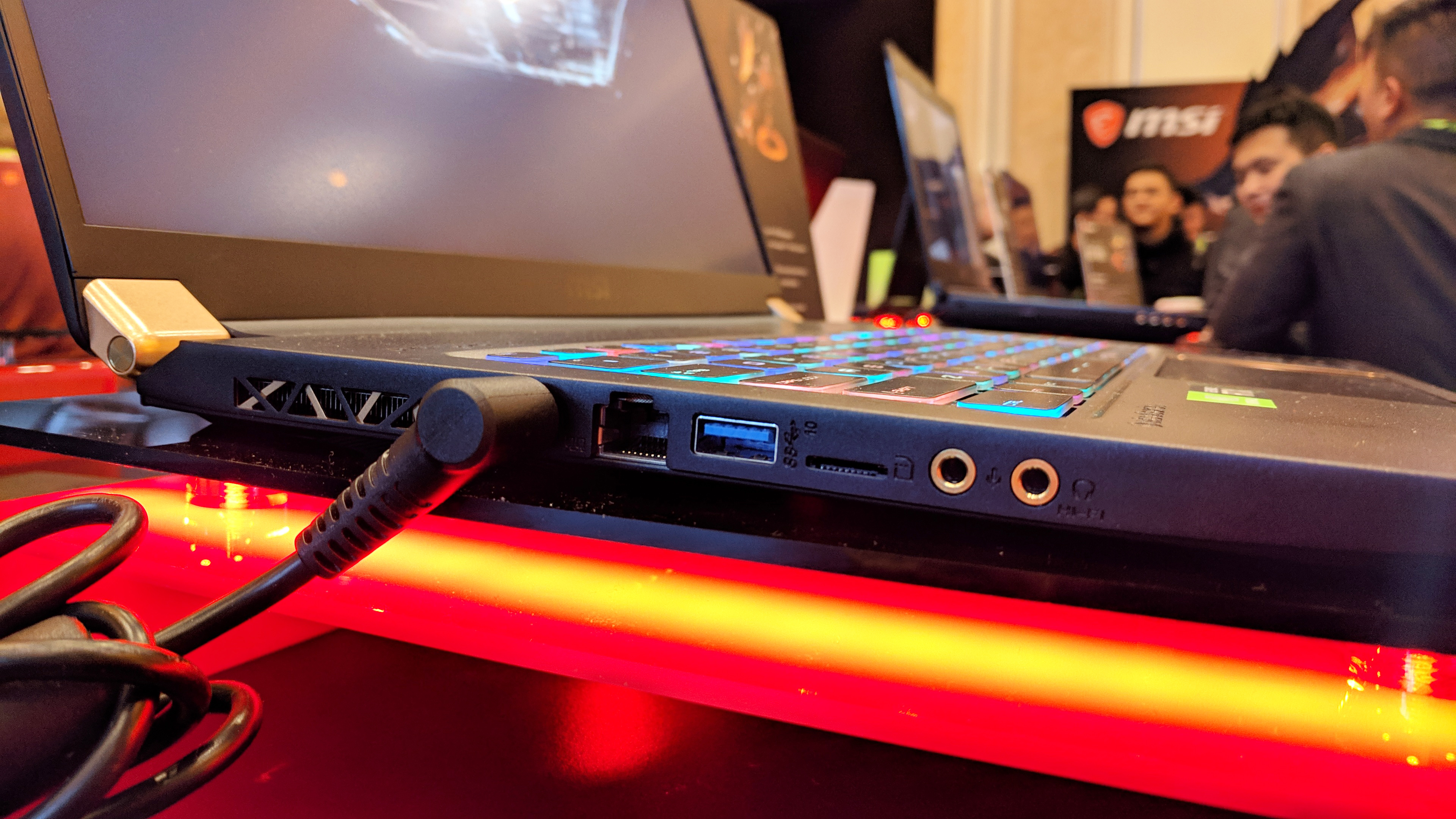 Still, provided you don’t mind that sort of thing, there’s a lot to like about this svelte gaming powerhouse. For starters, there’s that aforementioned RTX 2080 Max-Q chip, which tore through a demo of Battlefield V with all of Nvidia’s lovely ray tracing gubbins enabled with no problem at all.

Admittedly, you’d hope it would, given its 17.3in display only has a 1920×1080 resolution, but at least you’ve also got a 144Hz refresh rate packed in there as well to help make use of all that extra headroom. Intriguingly, MSI state the panel is only “IPS-level” in their official specs for the MS75 Stealth, so I’ll be interested to see how it performs once I get my calibrator on it. It certainly looked like a proper IPS screen in the flesh, with lovely vivid colours and high brightness levels popping out from within its teensy 5.2mm bezels, but I’ll reserve judgment until I’ve got a bona fide review sample in my hands.

Another thing MSI were keen to emphasise was the fact it has room for three SSDs. Not two. Three. That’s pretty uncommon for a gaming laptop, and they’re all easily accessible for future potential upgrades, too, when you unscrew the base. 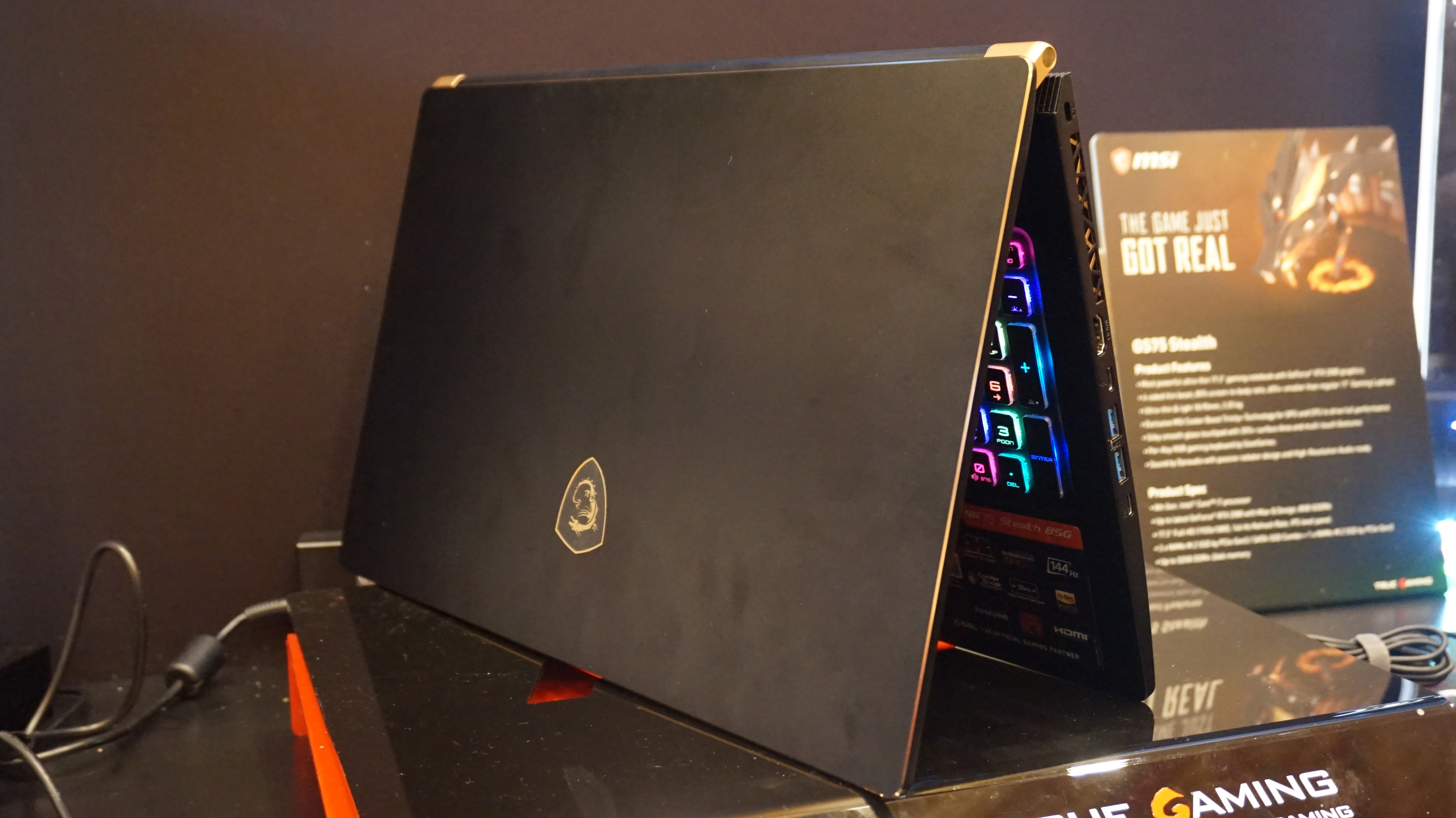 Man alive is it heavy, though. While its 2.25kg are nothing on the 3.4kg Triton 900, it’s still a sizable lump to heave around, even if you’re only taking it a short distance. The model on the show floor was also exceedingly toasty when I picked it up for myself, and I could feel the heat emanating from below the WASD keys. In fact, I’d even go as far to say it felt worryingly flimsy when I lifted it up, as the chassis and lid in particular seemed to creak and flex as I moved it about. This may be because it was an engineering sample rather than the final product, but hopefully the finished article will be a bit sturdier given how heavy it is.

It’s a shame it gets so hot, though, as the GS75 Stealth’s keyboard actually felt quite pleasant to type on during my brief time with it. It won’t replace your mechanical clackedy clacks by any means, but there was a decent amount of travel and each key felt nice and firm when I pressed them down. 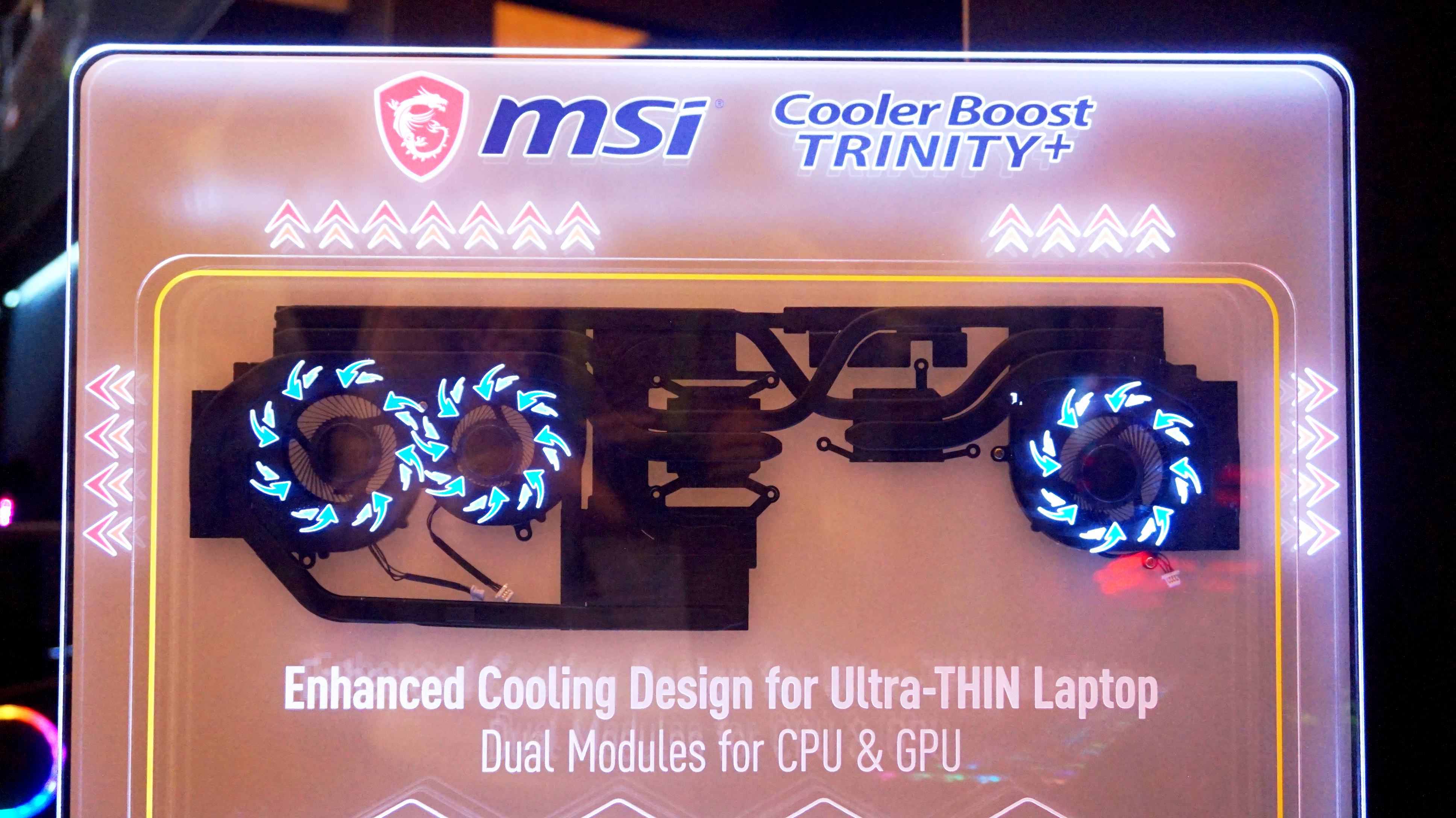 MSI spent a lot of time talking about the MS75 Stealth’s cooling mechanisms, but the laptop will gets uncomfortably hot under load.

As for the processor, it’s currently unclear what the initial configurations of the GS75 Stealth will actually ship with. MSI promised the GS75 Stealth would reach all the way up to one of Intel’s Core i9 CPUs in their CES press conference, but at the moment their website would seem to suggest the top specification will stop at an 8th Gen Core i7. Whichever one it ends up with, though, you’re still getting plenty of oomph with a Core i7, and it’s possible MSI may well eventually release a Core i9 model once Intel sort out the stock problems they’re currently experiencing.

Whatever happens on the CPU front, though, I still ended up preferring MSI’s other main RTX laptop on display here at CES, the refreshed GS65 Stealth, the GTX version of which was one of the best value for money gaming laptops of 2018. I’ll be writing up a separate impressions piece on that laptop very soon, but compared to its GS75 sibling, the GS65 felt a lot more sturdy and had an infinitely nicer keyboard to boot. The GS75 may be a world first for a 17in RTX 2080 thin and light combo, but I suspect the GS65 will continue to be the more popular laptop overall, records be damned.